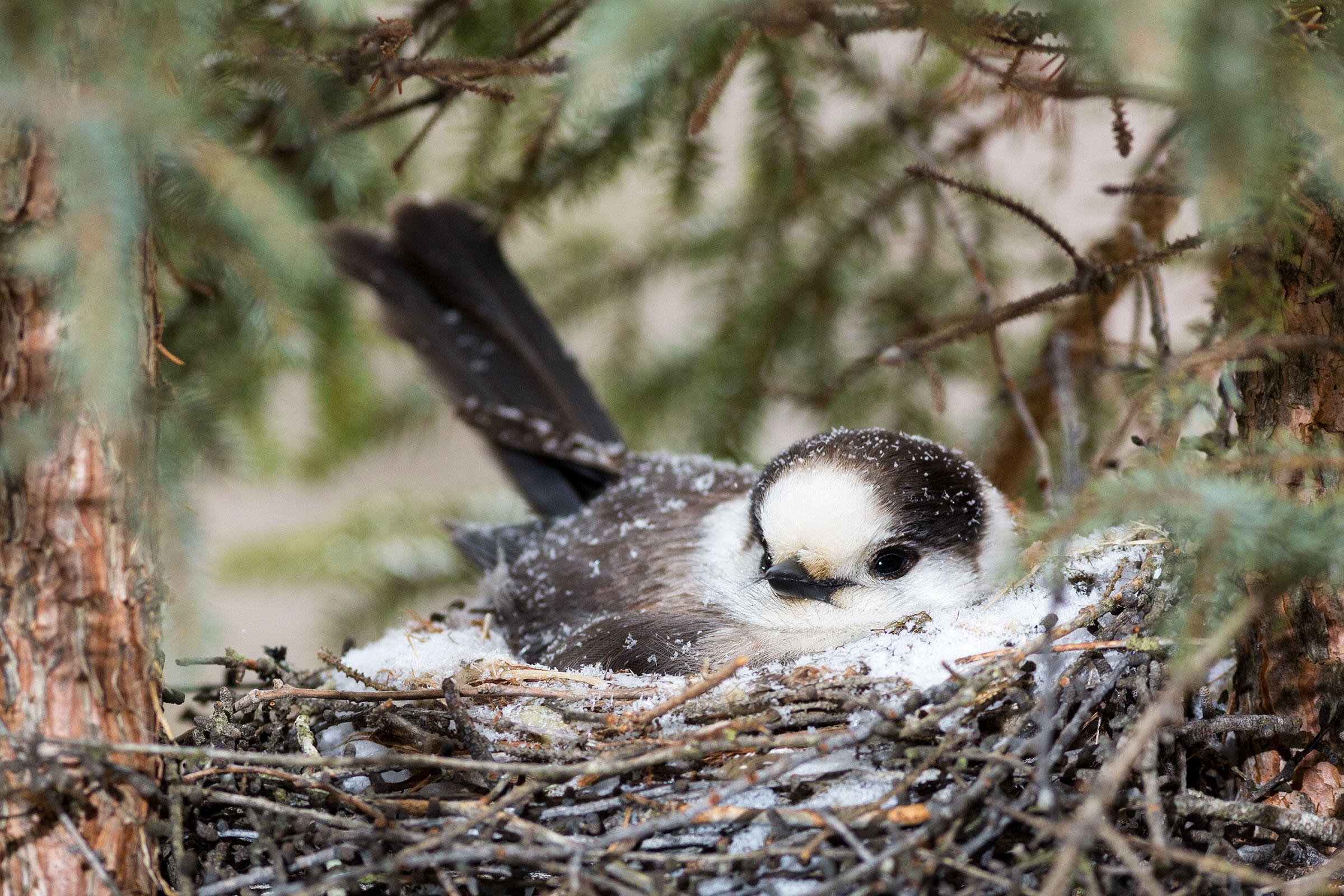 Thanks To Climate Change, Canada Jays May Eat Freezer-Burned Food All Winter

Algonquin Park is one of Ontario, Canada’s most picturesque, spanning almost 3,000 square miles of rolling hills, forests, and campgrounds. Although the landscape is full of life in three seasons, winter is quieter, with many birds further south and other species lying low in wait for spring. This is the Canada Jay’s time to shine: These pretty white-and-gray birds are residents of boreal forests, and are out and about even in the coldest weather. By late winter, when snow still covers the ground and there’s almost nothing to eat, they begin breeding.

How do they do it? With a huge store of cached food throughout their territory in the late summer and fall. While the idea of food caching might bring to mind a squirrel storing nuts, the jays stash perishable food items: often a mix of seeds, insects and berries that they chew up and coat in saliva. “They’ll put it typically under bark flakes on trees or in little crevices in branches,” says Alex Sutton, a PhD candidate in biology at the University of Guelph. These thousands of home-made energy balls make sustaining snacks all winter long.

But a new study by Sutton and colleagues finds that hoarding strategy may make the birds extra vulnerable to changes in temperature. It’s a concept first proposed in 2006 by Dan Strickland, co-author on the new study and a former chief naturalist at Algonquin who began closely observing the jays' breeding habits in the 1970s. After analyzing decades of data, the researchers found climate in the park in autumn may affect the birds' breeding success the following spring. In autumns in which temperatures froze and then thawed again—sometimes multiple times—Canada Jays tended to have smaller clutches of eggs, fewer eggs that hatched, and weaker nestlings the following breeding season.

What the scientists think is happening would be familiar to anyone who’s ever cooked a freezer-burned chunk of meat. It just doesn’t taste as good. It’s also not as nutritious. Many "freeze-thaw" events in autumn might defrost and refreeze the cache again and again, reducing the quality of the food the birds store up. “The actual physical structure of a food item starts to break down,” Sutton says. But to solidify this hypothesis, he says, they’d still need to study jays’ actual food caches, which, for humans, are very hard to uncover.

While there’s still more work to be done, the link between fewer, and weaker, offspring and fall temperatures is alarming. As the climate changes, the big temperature swings that create freeze-thaw cycles will become more common across the jay’s range, which extends from Alaska south into parts of the continental United States, according to the study. The researchers think this dynamic may already have been an important contributing factor to the Canada Jay’s shrinking population in Algonquin Park. “We’ve seen a pretty dramatic decline, over 50 percent, since the 1980s,” Suttton says.

Eike Lena Neuschulz, a research associate at Senckenberg Biodiversity and Climate Research Center who was not involved in the work, says the study effectively zeroed in on one subtle variable associated with climate change that could affect birds, demonstrating the value of long-running data sets. “We know the climate is changing, but it’s still relatively difficult to quantify the consequences of these changes for animal populations,” she says.

Other birds that cache perishable foods include the Spotted Nutcrackers that Neuschulz studies and the Northern Shrike (also known as the “butcher bird” for its practice of storing its small rodent prey). Canada Jays are unusual among birds, however, in the degree to which they rely on their hidden stashes, both for survival and reproduction, and for the length of time they store their food, says Sutton. Mammals like brown bears, foxes, and wolverines all cache perishables as well, and studying their caches might be an opportunity to learn more about these potential climate effects—particularly wolverines, a species that stores food for a long time like the Canada Jay.

Still, data about just one population of Canada Jays in the southern reach of the birds’ range can only tell scientists so much. “Basically, everything we know about Canada Jays comes from the Algonquin population,” says avian biologist Emily Williams, who works in Alaska’s Denali National Park and Preserve. There, a long-term monitoring program for the species launched about three years ago.

While nobody knows what’s happening with the Canada Jays of Alaska yet, they do know that climate change is happening faster at higher latitudes. “It’s way too early to say anything about whether climate change is affecting the jays here,” Williams says. The Guelph team, as well as researchers at the University of Washington, are now collaborating with the Alaska scientists in hopes of understanding what the future holds for this resourceful, resilient species.