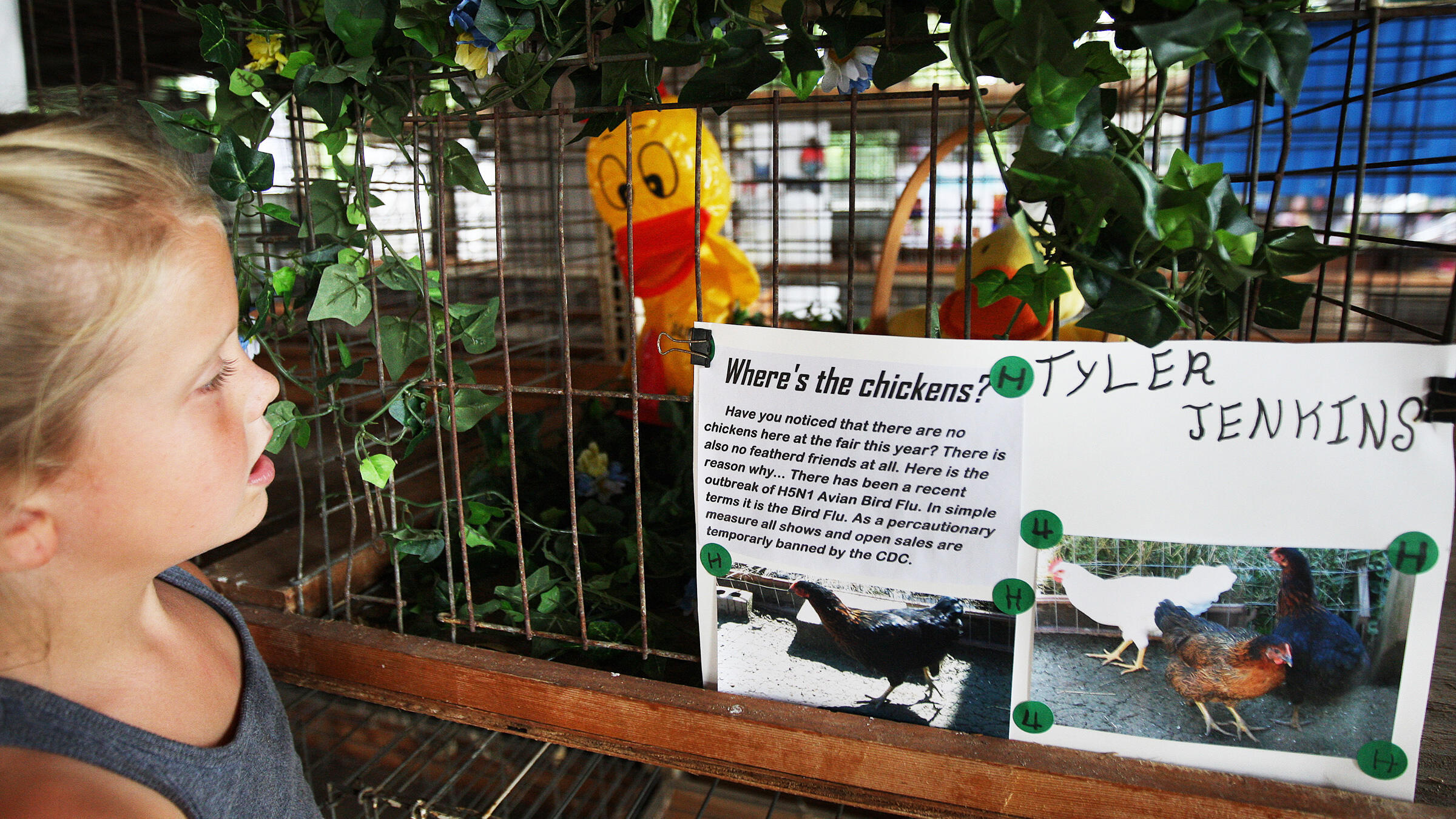 At Monday's Lawrence County, Indiana, poultry fair, Fynley Baker reads 4-H'er Tyler Jenkins' explanation of why an avian flu outbreak prevented him from bringing his birds to the fairgrounds. The fair is one of several across the country that have come up with creative ways to let 4-H members show off their specimens, even if they can't be there in the flesh. Photo: Bedford Times-Mail

For thousands of children and teenagers across the country, their local 4-H poultry fair is the defining event of the summer: It’s where they’ll finally have the chance to show off the chickens and ducks they’ve spent the year lovingly and carefully tending, and maybe even get a prize for their hard work. But on Tuesday, when the 4-H Poultry Project in Tippecanoe County, Indiana held their annual poultry exhibit, they faced one tiny obstacle: The birds weren't invited.

Thanks to the avian flu outbreak sweeping the country, Tippecanoe is one of hundreds of fairs in states from New York to Minnesota whose State Departments of Agriculture have banned poultry shows this year. That's created a lot of crestfallen kids. As John Lahrman, whose daughter is a member of the Tippecanoe 4-H Poultry Project, described the ban: “We just peed in all these kids’ Cheerios.”

The ban wasn’t put in place without reason. The current outbreak of HPAI H5N2, a particularly pathogenic strain of bird flu, was first detected in Canada late last year, and has since killed nearly 50 million livestock birds in the U.S. It’s not totally clear what set off the outbreak, but it probably started with wild birds—specifically, North American geese and ducks, which likely caught the virus, or its ancestor, when they were at the northernmost point in their migrations, somewhere around Alaska. Then, as those birds migrated down through the flyways, they brought the virus along, spreading it to farms and commercial poultry yards along the way.

While there have been a handful of reported wild bird deaths from avian flu (it’s unclear just how many birds have been infected), it's livestock birds who have born the brunt of the outbreak. Infected wild birds don't usually show the symptoms—like diarrhea—through which the disease is easily spread, and limited physical contact between birds curbs the opportunities for the virus to spread (though there’s evidence to suggest that the influence of climate change on migratory patterns could exacerbate future outbreaks. ). Commercial poultry operations, on the other hand, with their crowded, stressed-out birds, are a bonanza for H5N2. Researchers don’t know how the infection jumps from wild bird to livestock, but once it does, it spreads like wildfire, from bird to bird, then farm to farm.

Thankfully, the current outbreak finally seems to be winding down, and the conditions the 4-H birds are raised in are nothing like the conditions at a big poultry facility. Even so, bringing a few hundred birds into close proximity in a county fair barn isn’t the wisest move—especially birds as treasured as the 4-H specimens. If one bird gets sick, its whole flock must be euthanized.

Cindy Bull, the superintendent of the Tippecanoe 4-H Poultry Project, says that while the kids were heartbroken when they learned that they wouldn't be able to bring their birds to the show, they get why the ban was instituted. Lahrman’s daughter Haylee, who’s 13, said she was disappointed she wouldn't be able to display some of her prize gray call ducks this year, but “I don’t want my birds getting [the flu] and I don’t want anyone else’s birds getting it.” (Haylee raises chickens, too, but she likes her ducks better. “With chickens you have to give them a bath, and they don’t like it,” she says.)

Bull's daughter Molly was a little less sanguine. At 18, she’s about to age out of the 4-H club; this fair should have been her last hurrah. “I was really upset,” she said. “I had some really great birds this year.”

Still, rather than cancel the exhibit and admit defeat, Tippecanoe became one of several poultry clubs across the Midwest that have rolled with the punches and devised creative ways to let the kids have their fair after all. When they learned about the ban, in late May, Cindy Bull and John Lahrman sprung into action, determined to show the kids that, as Bull puts it, “There is more to 4-H than having the animals on the fairgrounds." So on Tuesday, the kids of Tippecanoe got to show their birds to the judges after all—well, they showed off  8” x 10” photographs of their specimens, placed inside the cages that were meant to house the live birds. Though they were short about 250 birds, the Tippecanoe 4-H population remained relatively steady: Sixty-five kids completed their project, compared to about 75 last year.

Kids also used a stuff animal to show off their anatomical chops to a judge, and then faced a multiple choice quiz. Molly Bull won a prize for her knowledge of English Poultry Standards and Haylee Lahrman took home a first place prize in showmanship for her class. (One of Haylee’s winning questions? Supplying the definition of “capon”: a rooster that’s been castrated.)

While Cindy Bull organized Tuesday’s logistics, John Lahrman spearheaded a fundraising campaign that raised more than $3,000 to pay for the photo prints and provide meals—fried chicken, of course—and T-shirts to members free of cost. This year's slogan: “Birds of a Feather Can’t Flock Together…But Their Humans Can!! WE SURVIVED AVIAN FLU 2015!!”

As John Lahrman put it, the choice to persevere was a no-brainer: “We can choose as a group to do two things: We can complain, we can moan, we can half-ass do something for these kids. Or we can do something to make it special.” Molly Bull also found the bright side, seeing the whole ordeal as a good “teaching experience” for when she goes off to Purdue University this fall to study agricultural education. Haylee Lahrman, meanwhile, pointed out some of the more subtle perks of having a birdless fair: no messy cages to clean.