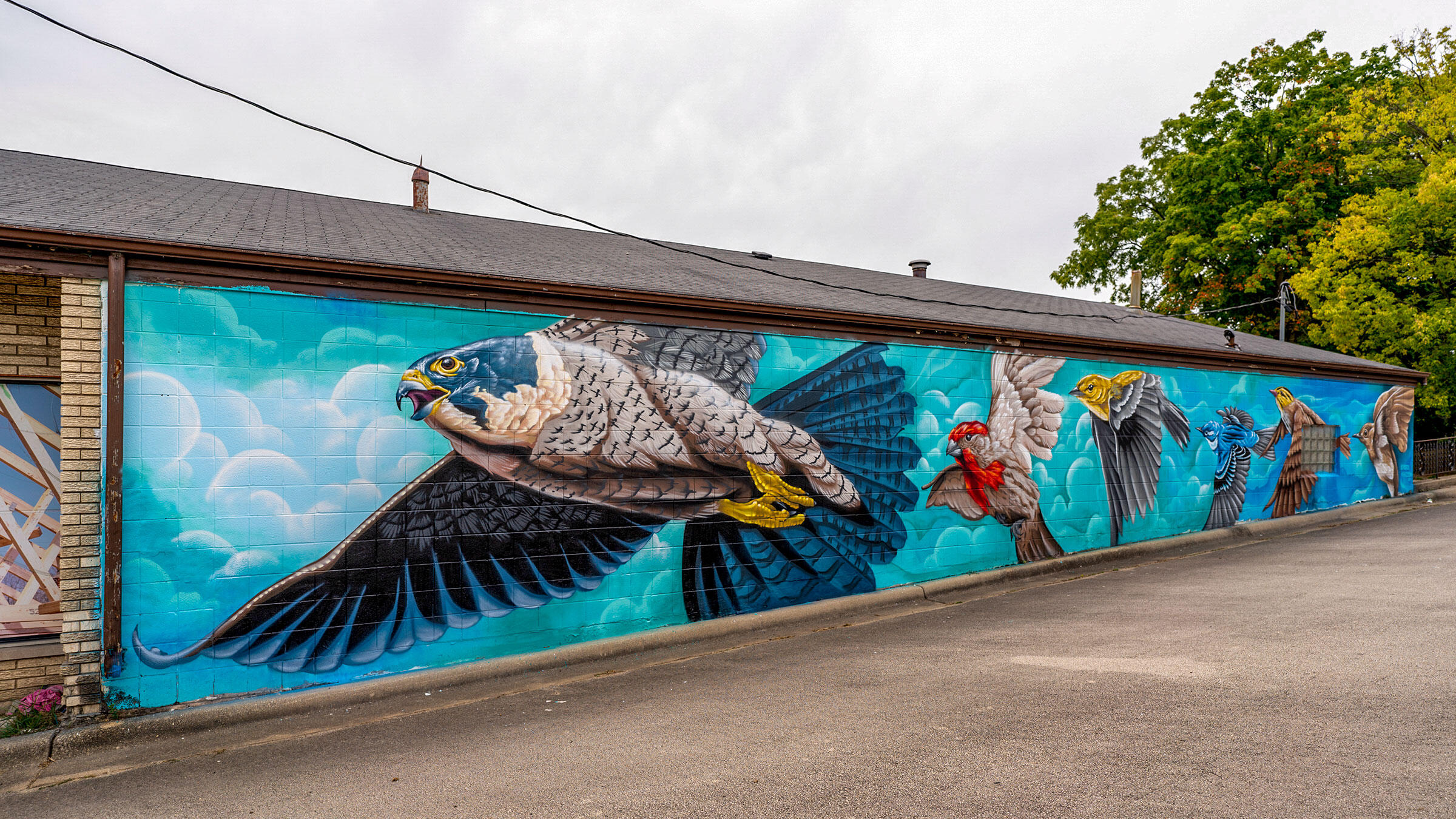 In a mural by Justin Suarez, a flock of songbirds (from left, a House Finch, Pine Warbler, Cerulean Warbler, Henslow's Sparrow, and Veery) chase a Peregrine Falcon, which is the official city bird of Rockford, Illinois— home of the Audubon Mural Project – Rockford. The Cerulean Warbler and Henslow's Sparrow in particular have been identified as highly vulnerable to climate change. Photo: Bryan Holliday

Paintings of imperiled birds beautify buildings throughout the city, providing a catalyst for conversations about climate change. 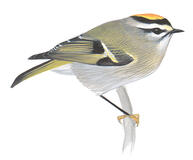 Jen Kuroda, president of Sinnissippi Audubon, strolls down the sidewalk carrying a life-size, papier-mâché Peregrine Falcon affixed to a pole. She's wearing a cardboard replica of an art deco building that once housed the reporters from the Rockford Morning Star and now hosts the only nesting pair of falcons in Rockford, Illinois—a city of more than 145,000 people located 90 miles northwest of Chicago. A small group trails behind her, including three girls dressed in all black, their heads covered in raven masks. It’s World Migratory Bird Day in May, and they’ve gathered for the first tour in a year of the Audubon Mural Project in Rockford.

On the walk from the morning’s first stop—a mural featuring a Yellow-headed Blackbird surrounded by native flowers—to the former newspaper building, Kuroda discusses the significance of the birds that have landed on walls throughout the city. They are all species imperiled by shifting habitats, extreme weather, and higher global temperatures—the consequences of climate change.

It’s a role Kuroda relishes. “You have such an opportunity to share a conservation message when you incorporate nature into public art. I wish there was more of it,” Kuroda tells me.

The Rockford murals were inspired by the Audubon Mural Project in New York, an effort that started in 2014 to highlight the threat climate change poses to birds. The project enlists artists to paint many of the 389 North American birds identified in the organization’s Survival By Degrees science report. “I learned about the project in New York City, and I fell in love with it,” Kuroda says.

In the project's mission, Kuroda saw an opportunity to call attention to a local problem: If climate change continues apace, reaching 3 degrees Celsius over preindustrial levels by the end of the century, 76 percent of Illinois will transition to a different biome. The grasslands that now dominate the state will become deciduous forest, imperiling grassland birds such as the Bobolink, which stands to be pushed out of Illinois (and most of the continental United States) entirely. In the summer breeding season, Audubon's report found, 55 of 165 bird species in the state are vulnerable to climate-induced habitat loss. But if people take action to reduce greenhouse gas emissions and cut the degree of warming in half, the number of vulnerable birds in the state will also be halved.

Galvanized by the idea, Kuroda emailed Avi Gitler of New York's Gitler &____ gallery, who with Audubon produces the Audubon Mural Project, and booked plane tickets to see the murals in person in 2018. Less than a year later, she had four murals in the works in Rockford, including one that tapped middle school students to paint a Golden-crowned Kinglet on a retaining wall and others produced in collaboration with the city’s Creative Festival. The project has now grown to include seven murals, featuring 24 birds, and she has plans for more. 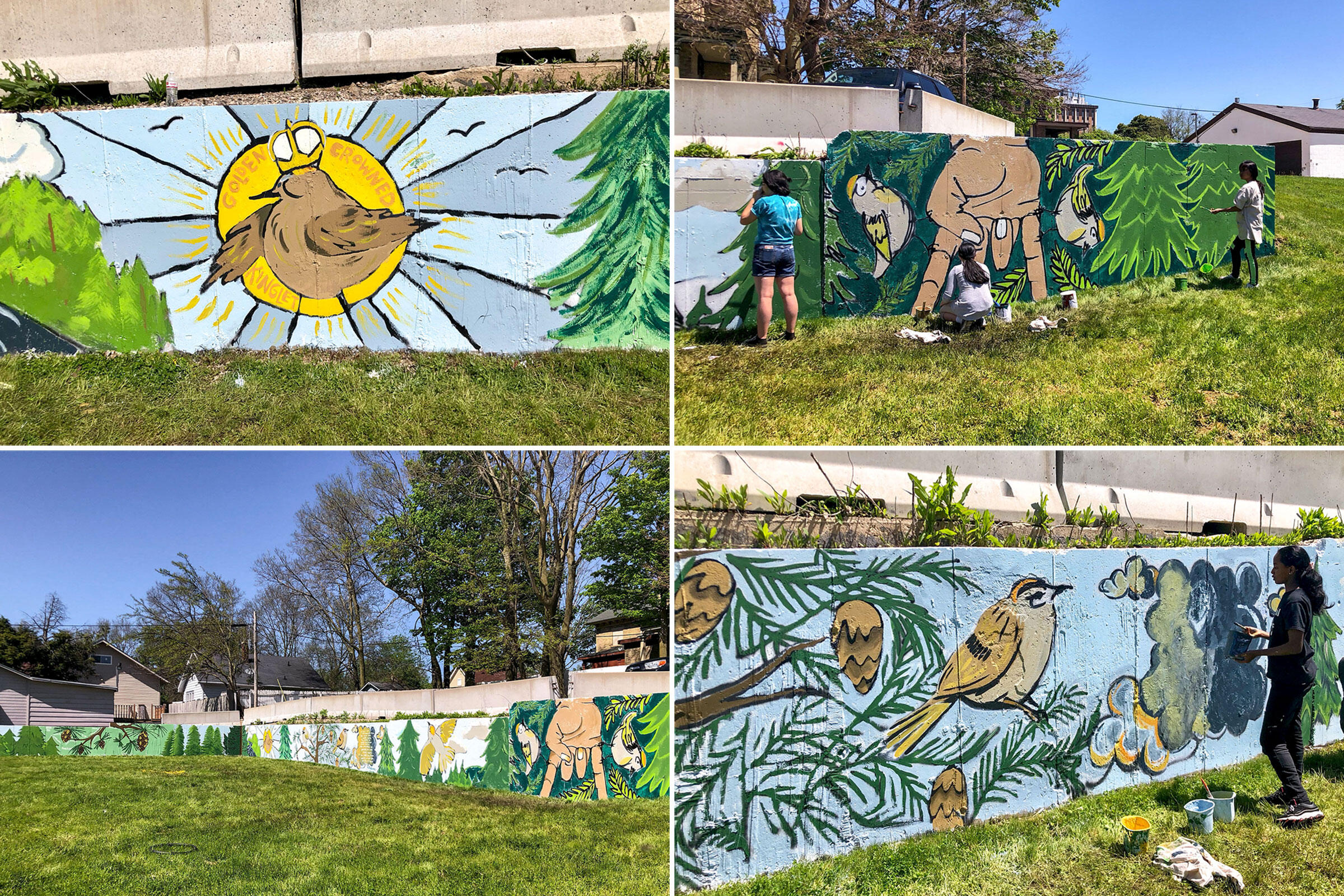 Students from Lincoln Middle School in Rockford, Illinois, designed and painted a mural featuring a Golden-Crowned Kinglet. A tiny bird with a fiery cap, the kinglet may be pushed north, out of the contiguous United States and southern Canada and deep into the Arctic, during the summer as temperatures warm. Photo: Jen Kuroda

“I think one of the things that Jennifer has done is proven that a really motivated and really engaged citizen can create a robust and dynamic series of murals in their hometown,” Gitler says. “It’s been amazing to see us expand the message. Jennifer Kuroda is kind of the perfect partner.”

In fact, Kuroda has been so successful at creating a satellite mural project that Gitler consulted her on the toolkit he and Audubon developed for others interested in bringing the Audubon Mural Project to their communities. In addition to the nearly 100 murals that have been painted in the Harlem and Washington Heights neighborhoods of New York City, climate-threatened bird murals have spread to Chicago and to Vashon Island, off the coast of Seattle, and to France, and others are in the works in California and elsewhere. The project has also inspired a mural project featuring endangered species in Bozeman, Montana.

Sinnissippi Audubon engages the community with its murals through regular tours, which, before the pandemic temporarily brought them to a halt, drew dozens of people. The chapter is also working on a broader vision to bring people together around bird conservation.

Kuroda also serves as president of the Audubon Council of Illinois, a group of three chapters striving to make a number of cities in the Prairie State bird-friendly by piloting an effort to create Bird City Illinois—a designation awarded to municipalities that engage in bird-friendly activities, such as passing Migratory Bird Day resolutions. The plan is for those urban centers to become part of a national Bird Cities America network, which could launch as early as next year.

“Jen has all these fabulous ideas and then she does them,” says Susan Goldberg, a Sinnissippi Audubon board member, as the tour group moves on to a mural featuring bright blossoms and a Sandhill Crane, which migrate and nest throughout the county.

Kuroda's goal is to grow the Rockford project to 25 murals. A few months after the tours resumed, she added another stop, to see a wall featuring a group of eight bird species, including an American Kestrel and a Black-and-white Warbler, painted by artist Yulia Avgustinovich. A mile away, artist Justin Suarez painted two more murals. The first features a Northern Goshawk, a raptor that Audubon scientists identified as highly vulnerable to the effects of climate change. 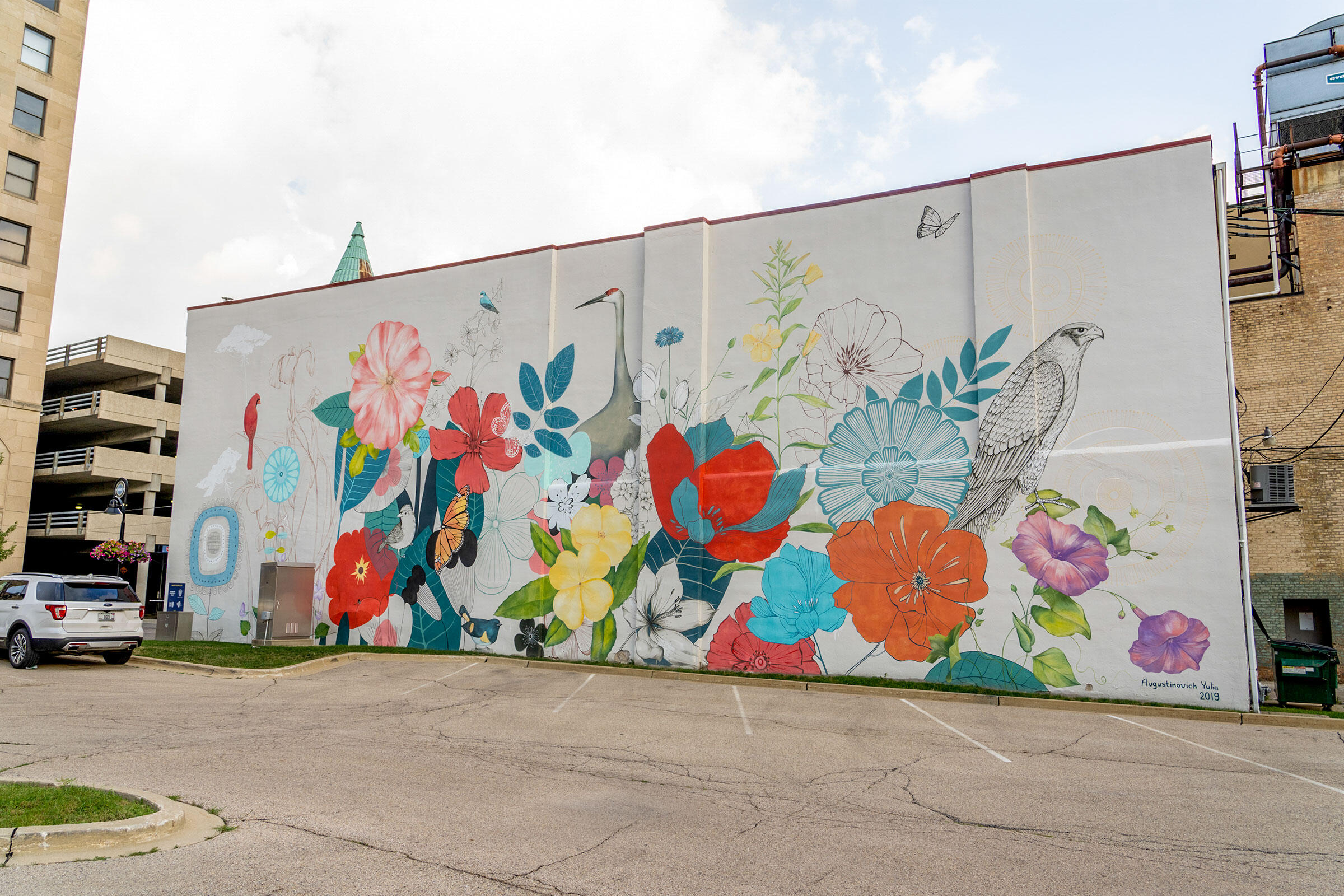 Suarez's second mural is double-sided, covering the east and west sides of a building. Along one wall, "Dodge" shows a Peregrine Falcon diving into a group of songbirds; on an adjoining wall, "Chase" shows songbirds in pursuit, successfully driving the predator away. He intends for the scene to illustrate a story about birds, he says, but also about the power people also have to band together to achieve common goals.

“This is very much the type of work that I want to be doing with my career. It’s become a big part of my artistic voice,” says Suarez, who has painted murals featuring wildlife in Chicago, Milwaukee, and in his hometown of Rochester, New York. He hopes that when people see his Rockford murals, they’ll reflect on how human behavior affects the world, including the birds, around us—which is exactly what Kuroda also hopes to accomplish by painting her hometown in birds.