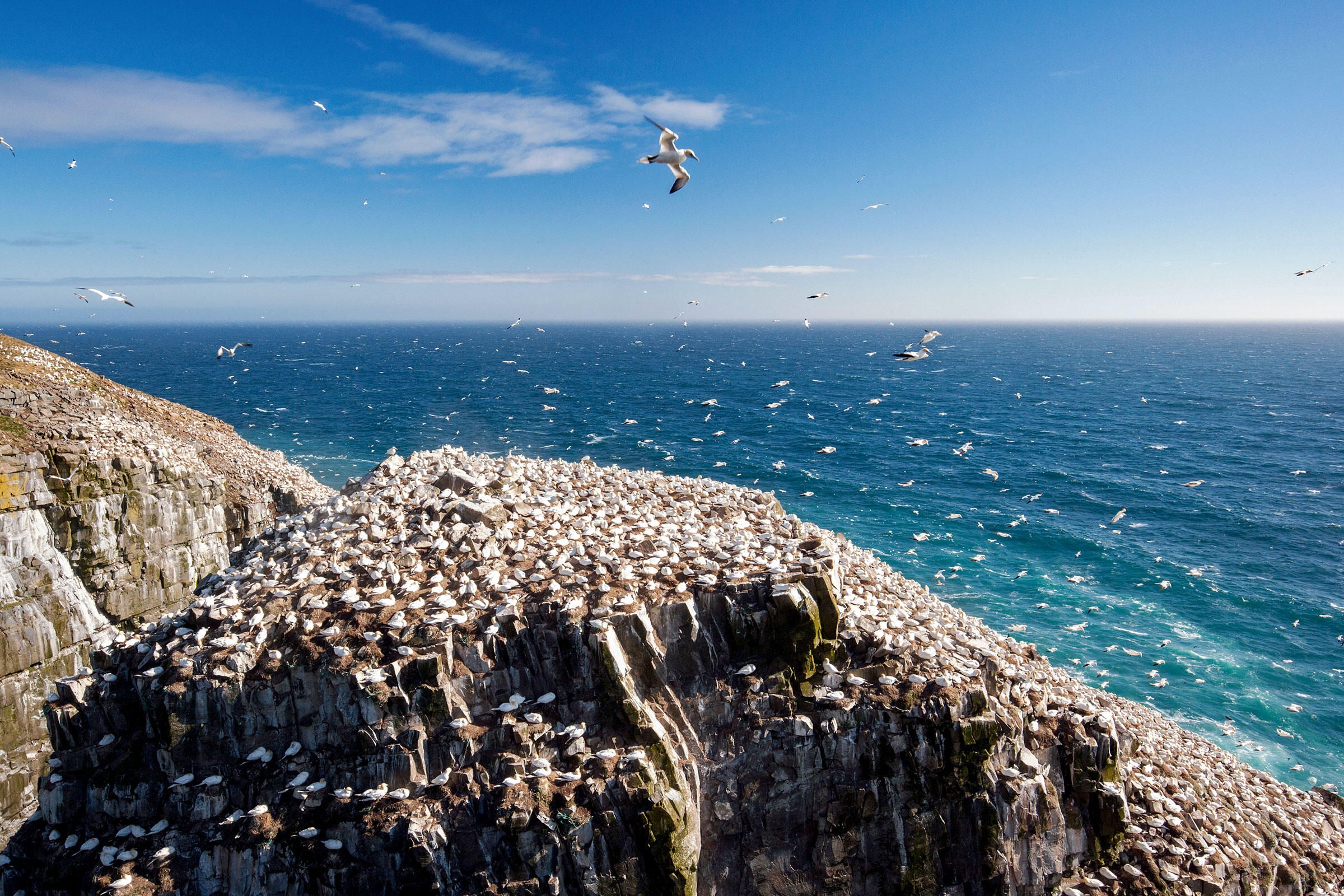 The Best Places to See Seabirds Without Getting Seasick

Visit one of these five famous seawatching destinations on your next birding adventure.

Have you ever been seasick? It is—and please indulge me in a pause here for dramatic effect—THE worst. Being seasick is the absolute worst.

So what can the sensitive-stomached birder do to see great seabirds without losing their lunch? Seawatching, of course. I’ve given you a general primer already, but seawatching is the great hope of land-lubbers who want access to pelagic species without having to board a boat.

But not all seawatches are equal. Some spots are better than others, and some are downright famous. Here is a quick guide to some of the most popular seawatches in North America to consider for your next birding adventure. It's never too early to start planning.

There are few guarantees in seawatching—unless you’re at a nesting colony. A short drive from the capital of St. John’s on the island of Newfoundland is Cape St. Mary’s Ecological Reserve, a massive cliffside colony hosting thousands of Northern Gannets, Black-legged Kittiwakes, Common and Thick-billed Murres, Razorbills, Black Guillemots, and other species.

The access is incredible. Visitors walk right up to the edge of the cliff (be careful!) and peer out over a swirling, squawking, screaming mass of seabirds. Species that are normally seen as a tiny dot through a scope are sitting just a few feet away, allowing prolonged opportunities for photography and study. A visit to Cape St. Mary’s was the first major stop made by Roger Tory Peterson and James Fisher on their epic 1953 journey that resulted in their book Wild America. Regardless of whether you’re similarly moved to drop it all and chase birds, a visit to Cape St. Mary’s will certainly be a highlight of your birding life.

Best times to go: Any season for seawatching; spring and fall for migrants; April or August for migrating shorebirds

Generally speaking, the further you are sticking out into the sea, the better the seawatching. Perched at the edge of Monterey Bay and the Pacific, Point Pinos fits that bill perfectly. At least 225 species have been identified from the seawatch there, including at least 12 species of alcid, all three jaegers, more than 20 gulls and terns, eight species of shearwater, plus petrels, storm-petrels, skuas, and just about every species of shorebird in the U.S.

With nearby attractions like the Monterey Bay Aquarium and a small but bustling downtown, Monterey has plenty to occupy the rest of the family while you look for birds (or bring them along!). The seawatching is easy and accessible from a number of public pull-outs and benches along the coast. For more detailed information and directions, check out this great online guide.

Cape May is more than just a hotspot for migrant passerines: It also might be the most famous seawatch on the East Coast. Staffed by New Jersey Audubon between late September and late December and conducted on the beach, the Avalon Seawatch is the place to watch thousands of seabirds migrate south. On good years, the Avalon Seawatch records more than one million individual birds streaming by.

Included in that number are hundreds of thousands of Double-crested Cormorants, Black, White-winged, and Surf Scoters, and huge numbers of everything from shorebirds and gulls to terns, geese, and swans. Along with the fabled Cape May hawkwatch and the area's general migratory goodness, the Avalon Seawatch helps make Cape May the premier fall migration spot in America.

While most of the best seawatching spots are popular because of their sheer numbers or staggering diversity, Utqiaġvik, formerly Barrow, is a destination because it’s the best spot in North America to see a single rare species: Ross’s Gull. A dainty gull with a pink wash on its belly and a ring around its neck, this lovely bird is scarce outside of its home in the Arctic. The most reliable spot is Utqiaġvik, a waypoint for Ross’s in the fall along their poorly understood migration route.

Migrating Ross’s are the fall highlight, but birders may also see Snowy Owl, Ivory Gull, Yellow-billed Loon, and Hoary Redpoll. There are plenty of great birds in Utqiaġvik during the summer, too, including a trio of rare duck—Steller’s, King, and Spectacled Eider—lots of breeding shorebirds, and possible Asian vagrants like stints and Ruff. Utqiaġvik is a bucket-list seawatch to be sure, but it's also an experience you’ll never forget. Your best bet to visit is join one of the several birding tours that visit the town. They'll give you the best chance at spotting Ross’s Gulls and other specialties.

Okay, so it’s not technically a sea, but looking out over the endless horizon of Lake Superior you’d be hard-pressed to tell the difference. Though you won’t get the smell of the salty air, you can find a ton of seabirds on Superior—and Whitefish Point might be the best place to look for them. Located way up on the north side of Michigan's Upper Peninsula, next to the oldest operating lighthouse on the lake, Whitefish Point is a birder’s paradise.

More than 330 different birds have been spotted here, including many of those more closely associated with the ocean, including scoters, jaegers, Long-tailed Ducks, and loads of terns and gulls. The area is teeming with all kinds of migrant species—warblers and raptors and owls—so you’ll never lack for birds even if things over the water are slow.

Birdist Rule #13: Behold the Bounty of the Sea!

Don't worry, you can leave your barf bag at home.

The deaths, including many Short-tailed Shearwaters, coincided with a new marine heat wave in the region. But the exact cause still eludes scientists.