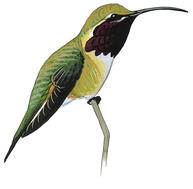 I thought I’d seen it all. As the forensic ornithologist for the U.S. Fish and Wildlife Service (FWS), it was my job to help law enforcement agents crack cases that involved bird parts. I’d encountered a huge Andean Condor feather attached to a polka-dancer’s fedora. Ornately carved hornbill skulls. A taxidermy mount with the body of a goat and the head of an ostrich.

But I was still shocked back in 2013 to open a sealed evidence bag and discover a mass of dried hummingbird carcasses, each in a little package with a neatly printed Spanish prayer.

So began my work on the illegal trade in hummingbird love charms. Between then and my retirement last December, I examined more than 900 of the objects, revealing a little-known and potentially significant illegal trade in these ecologically important and beloved birds. I recently published a review of this trade in the journal Conservation Science and Practice.

Hummingbirds have been associated with vitality, health, and good luck in Mexico since pre-Hispanic times. This has led to a traditional belief that hummingbirds have a magical power to bring love. One of the colloquial terms for hummingbirds in Mexico is chuparosa (literally “rose-sucker”), and love charms containing their dried remains are often packaged with a prayer that calls upon the bird to give the owner “the powers to possess and enjoy any woman I want, whether it be a maiden, married or widow.”

The only strict legal protections for hummingbirds in Mexico are granted to 20 mostly endemic species and subspecies on the country’s endangered list. In contrast, the Migratory Bird Treaty Act prohibits the killing, possession, and sale of all hummingbird species native to the United States. Thus, the chuparosa charms sold in traditional shops catering to Mexican immigrant communities in this country are illegal.

Beginning with that initial seizure of hummingbird charms in 2013, the FWS Office of Law Enforcement has conducted 52 investigations of this trade. Agents have concentrated their efforts in Texas and New Mexico, but they’ve found charms as far from the border as Minnesota. The most common presentation is for the dried body of the hummingbird to be enclosed in a red paper tube surrounded by red satin thread, and with the head and beak exposed. A “Made in Mexico” sticker is often attached to the outside of the packet. Prices range from $20 to $100, with $50 being typical.

Almost every hummingbird that occurs in the United States has been identified in these Mexican love charms—18 species in all, ranging from the common Ruby-throated Hummingbird of the East to the declining Rufous Hummingbird of the West, as well as such southwestern specialties as the Rivoli’s, White-eared, and Lucifer Hummingbirds. Although we have uncovered no evidence that hummingbirds are being killed in the United States for love charms, there is no question that species with U.S. populations are being killed in Mexico.

The trade within our borders is extensive, and the unregulated trade in Mexico is unquestionably far more so.

By far the most commonly identified hummingbird in the charms is the Ruby-throated, which nests entirely in the United States and visits Mexico only in the non-breeding season. One of the most chilling moments of my career came when I discovered a Ruby-throated Hummingbird with a U.S. bird band on its leg, placed there for scientific research on the migration and survival of the species. This bird, a female, was banded on June 21, 2016 near Carbondale, Illinois, and its carcass was purchased in a packet with a chuparosa prayer in Laredo, Texas on December 15, 2017.

Does the trade in these love charms threaten hummingbird populations? We simply don’t know. Our investigators could visit only a fraction of the shops that might offer chuparosa charms for sale, but still recovered the remains of 905 dead hummingbirds. This suggests that the trade within our borders is extensive, and the unregulated trade in Mexico is unquestionably far more so.

Thankfully, the populations of most hummingbird species in the chuparosa trade are robust. The Ruby-throated has a population estimated at more than 30 million birds and growing. It seems unlikely that the killing of hummingbirds for love charms threatens any species with extinction. However, that doesn’t mean that the trade is not a concern. Hummingbirds play a vital ecological role, with many plant species dependent on them for pollination. If the killing of hummingbirds is concentrated in particular areas of Mexico, local populations could be threatened, with significant ecological effects. Much more information is needed to understand the impact of this practice.

While law enforcement in the United States can combat the trade here, the practice of killing hummingbirds for their supposed powers will continue until attitudes surrounding this tradition change in Mexico. Coordinated education and enforcement discussions are underway, through groups such as the Trilateral Committee for Wildlife and Ecosystem Conservation and Management, which facilitates partnerships between the three countries of North America.

Increasingly, articles on the importance of hummingbirds and the threat posed by the love charm trade have appeared in Mexican newspapers and magazines. “Let’s not sacrifice hummingbirds for witchcraft,” the eminent Mexican conservationist and hummingbird expert Maria del Coro Arizmendi Arriaga said in a 2019 interview. “These birds have always been good luck and carriers of good wishes, but alive, not dead. A dead hummingbird does not serve to attract good luck or love.”

Mexico is home to an extraordinary array of hummingbird species and has fostered a deep cultural connection to these marvelous birds dating back to at least the time of the Aztecs. What better way to honor this rich natural and cultural legacy than to conserve hummingbirds for the enjoyment and ecological benefit of future generations?