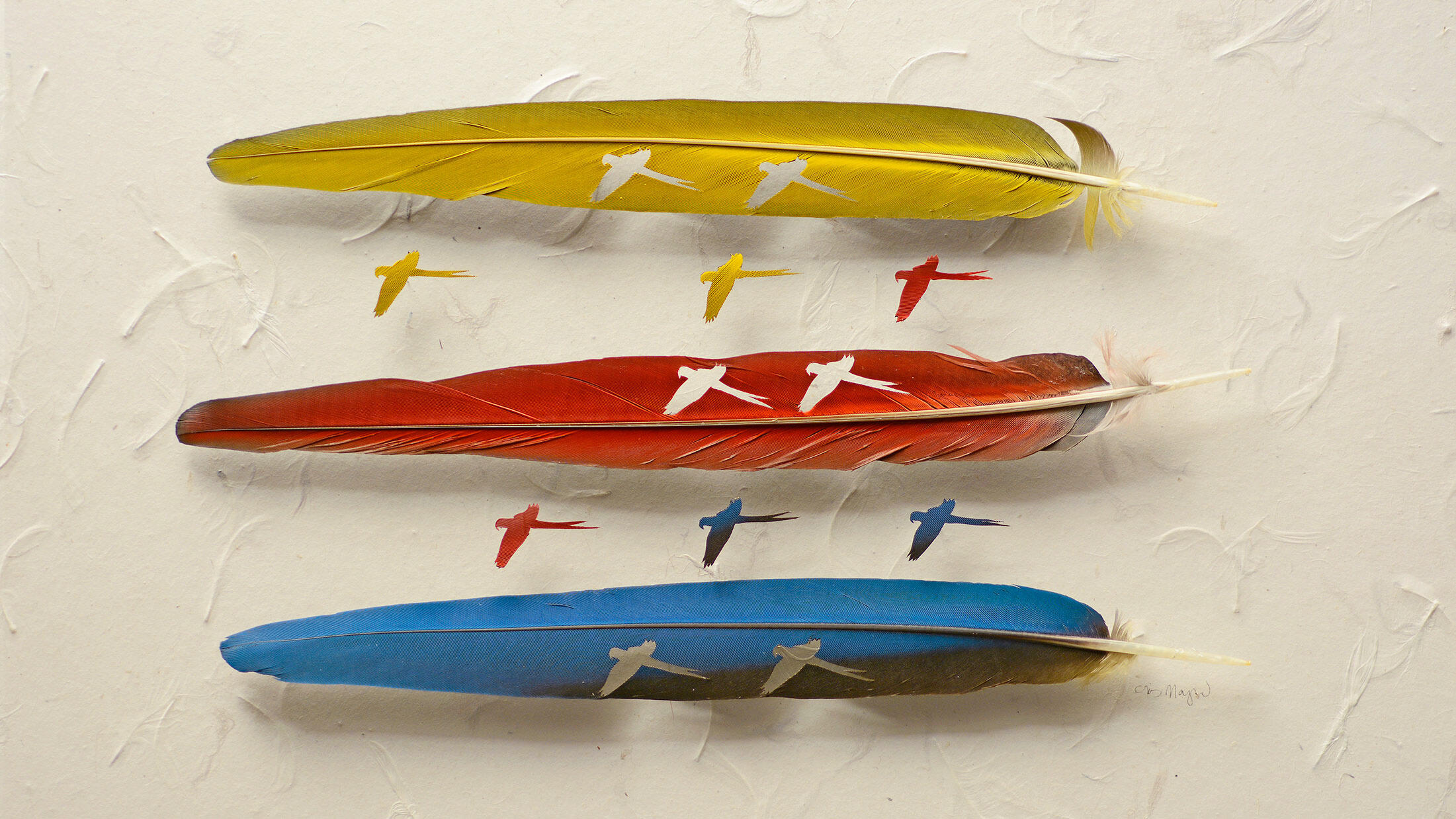 When Chris Maynard collects cast-off feathers, it’s a choosy process. “I can’t use feathers from most any bird in my country, ” he says. No eagles; no seagulls; no songbirds; no crows. Those birds—along with their parts—are highly protected by the Migratory Bird Treaty and CITES acts. “A lot of artists don’t pay attention to these rules, but they’re quite important to me,” he says.

A former entomologist and hydrology biologist, Maynard switched over to full-time artist in 2008. He’s been working with feathers from birds since he was 12-years-old, but began snipping, arranging, and photographing them in his Olympia, Washington studio just last year. His namesake pieces are carved-out feathers, which are featured in his online menagerie, “Featherfolio.” In late 2014, he also published Feathers: Form and Function, a book that serves as an education on evolution of avian flight.

When obtaining the feathers for his art, Maynard usually takes from the likes of zoo parrots, pheasants, pet turkeys, and roaming Wild Turkeys. Sometimes, he sources species from local aviaries, such as his neighbor’s African Crowned Cranes. He then cleans the gathered feathers with water and salt. He dries them, and freezes out any lingering mites.

Choosing the right feather doesn’t just mean looking for colors that pop. “I’m more drawn to texture and size,” Maynard says. Each bird sports an array of feathers that are incredibly diverse: the downy body plumes, the stiff, flat wing quills that are cupped and curved. Some of these feathers act as thermostats, he says, expanding for insulation, then contracting and squeezing out pockets of heat when temperatures get too warm. In flightless water birds like penguins, the vanes of the outer feathers act as a waterproof barrier for the fluff trapped below.

In his Olympia studio, Maynard can often be seen armed with a pair of tweezers or scissors or scalpel, with an old pair of steampunk magnifiers perched on his nose. “My father was an eye surgeon,” he says. “I inherited a lot of his tools.” He’s carving away at the weightless form of a wispy plume or a sturdier speckled pheasant tail feather. “My favorite comes from an absolutely beautiful captive Argus Pheasant—he’s given me molts for 10 years,” he says. It’s clear that attention to detail runs in the family: His mother was a professional visual artist as well. 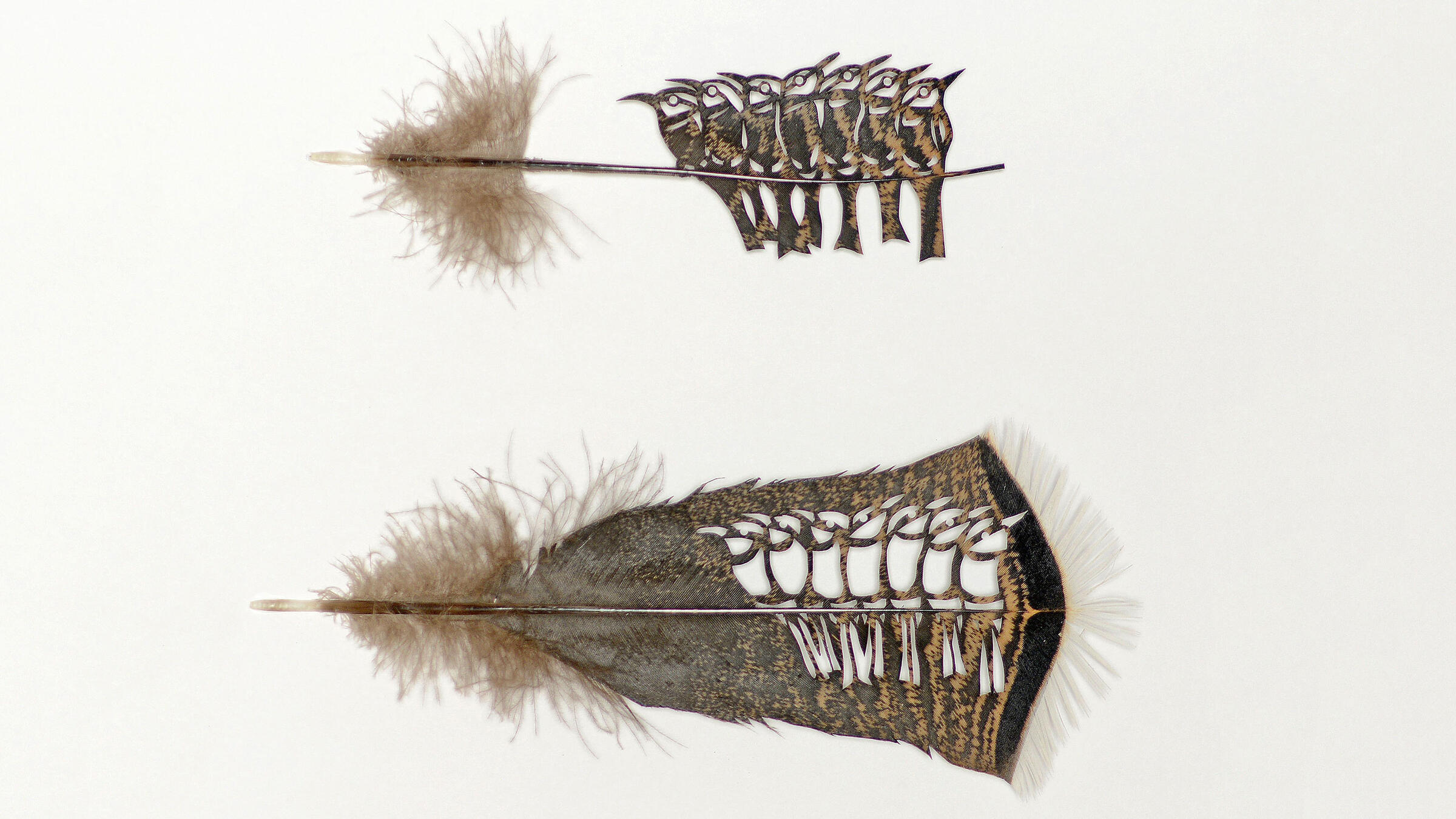 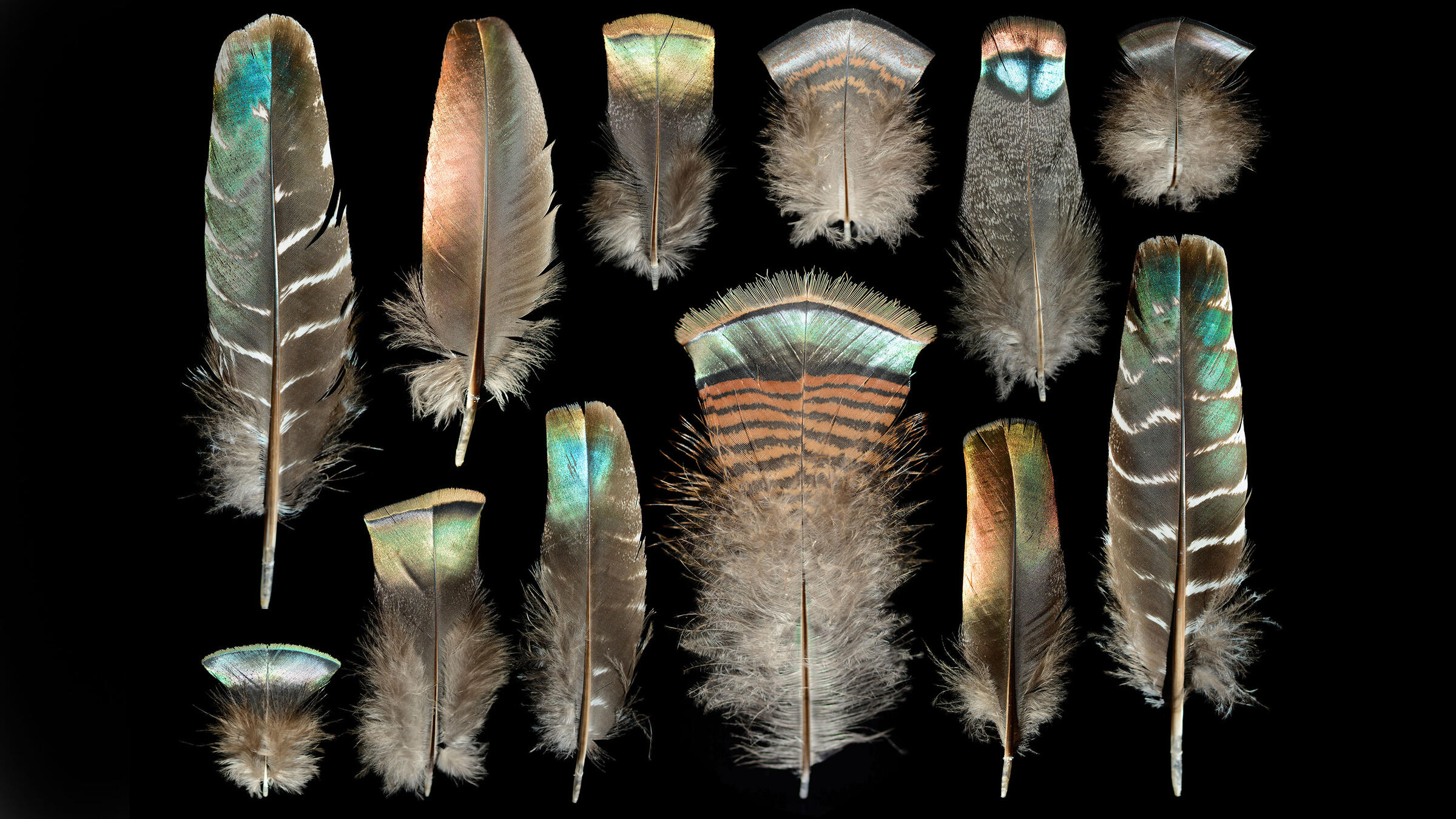 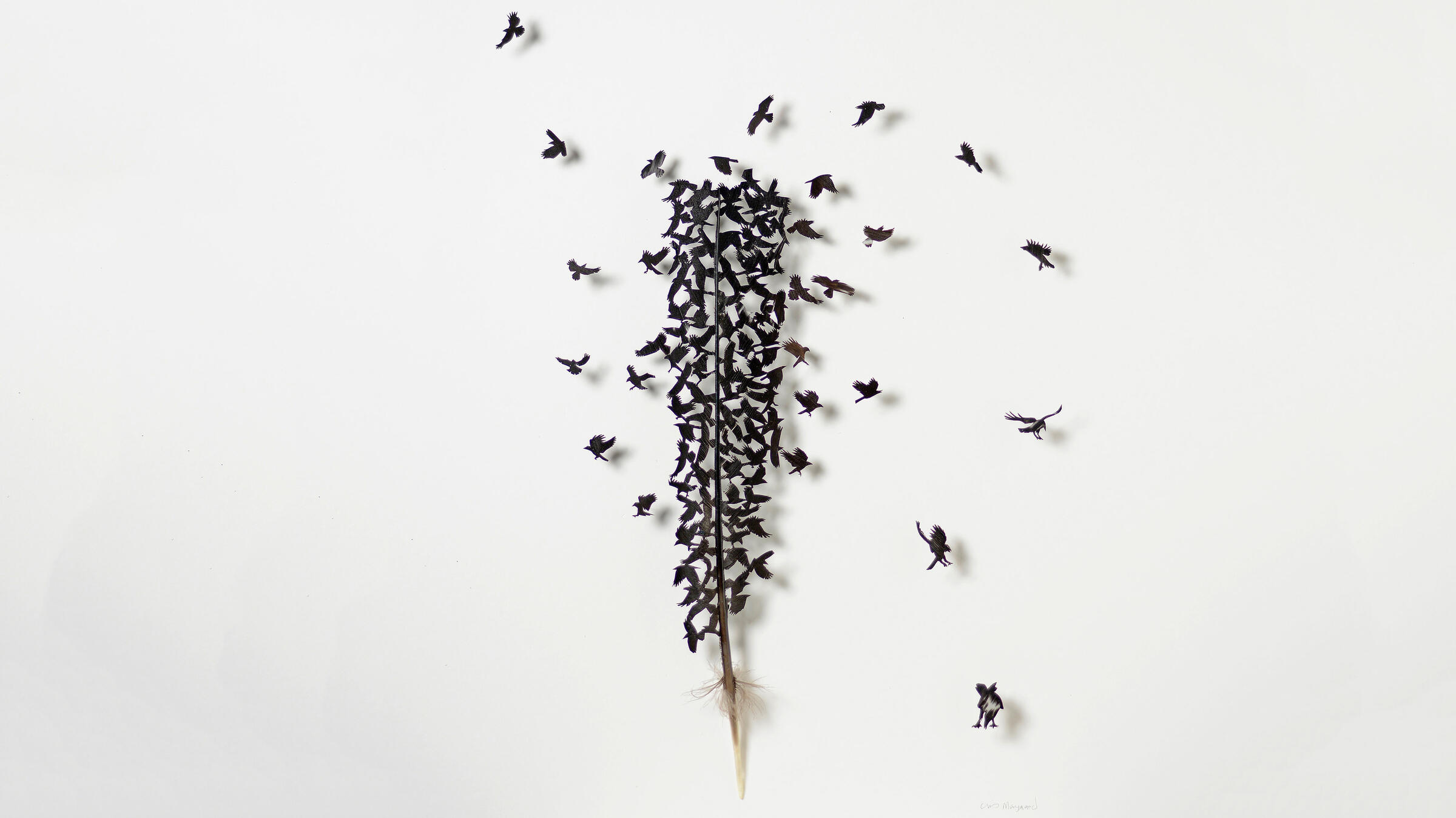 Maynard’s own homed in vision of the world comes through in his 2015 TEDx Olympia talk. “I explore the world from a very small place with confidence,” he tells the audience. “If we try to engage the whole world at once, details become a blur.” By picking apart something so small, he’s able to form grand ideas that speak to the whole. In one of his pieces, he presents eight ebony birds made mainly from turkey and parakeet feathers with round, spiraling “speech bubbles” slipping out of their beaks. “I envisioned this piece as sort of a dream shared by the males as they sing,” Maynard says, referring to lekking birds that sit on cattails to summon their mates.

In his time outside of the studio, Maynard gives talks on evolution, pursues environmental work, and leads field trips with his local Audubon chapter. “He evokes a sense of appreciation for something most of us have taken for granted all our lives,” Deb Nickerson, the director of the Black Hills Audubon Society, says -- most of us have never looked at feathers so close.

They’re often perceived as delicate. But by looking near, Maynard can see that this is obviously not true. They were borne out of function and strength, he writes on his blog. They keep the animal cloaked, sheltered, and attractive, and they sustain it in flight. With the help of feathers, birds cross oceans and mountains, reaching altitudes that are impossible to imagine. Feathers, he writes, are actually quite tough—that’s the story he’s looking to tell. 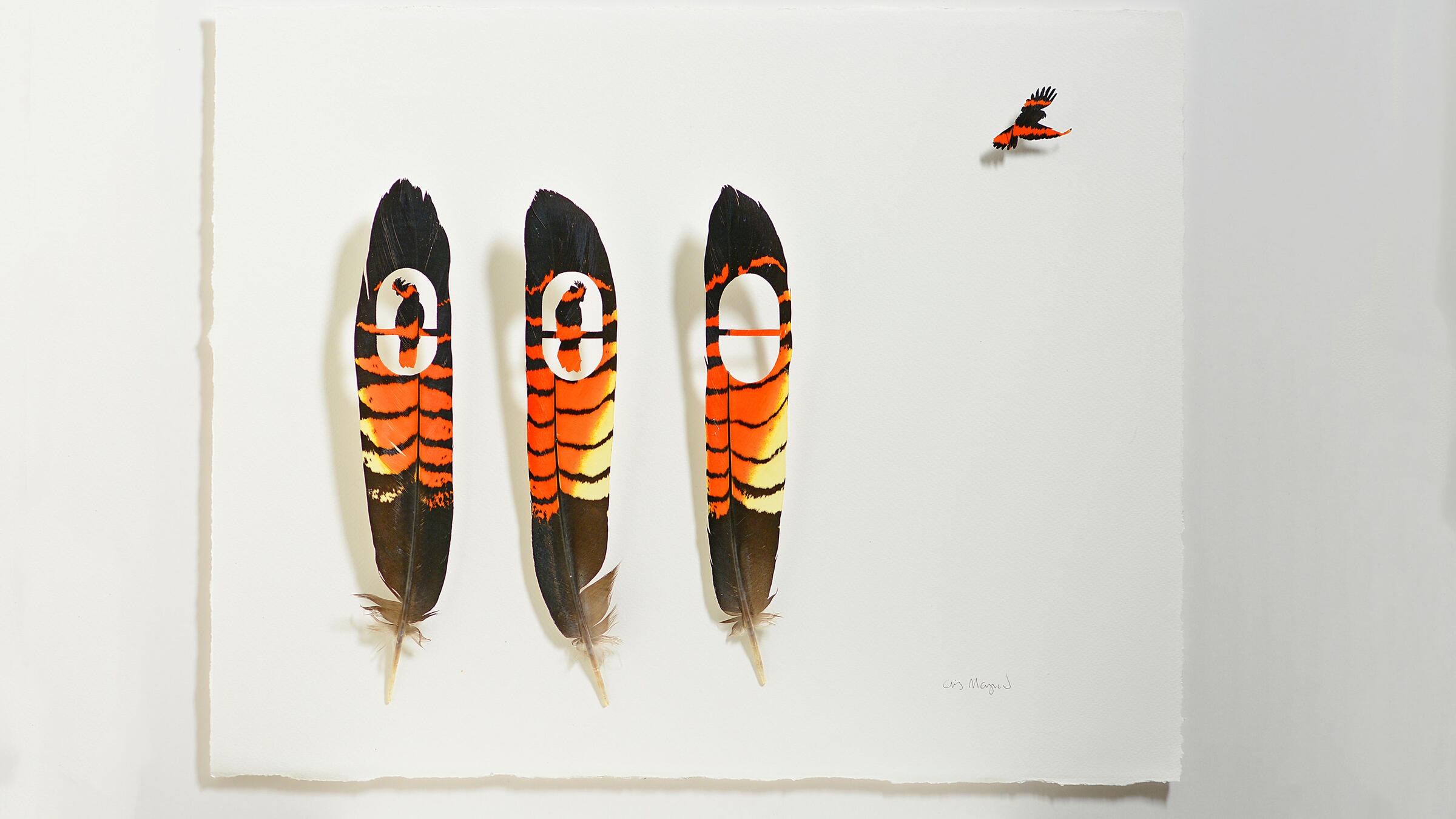 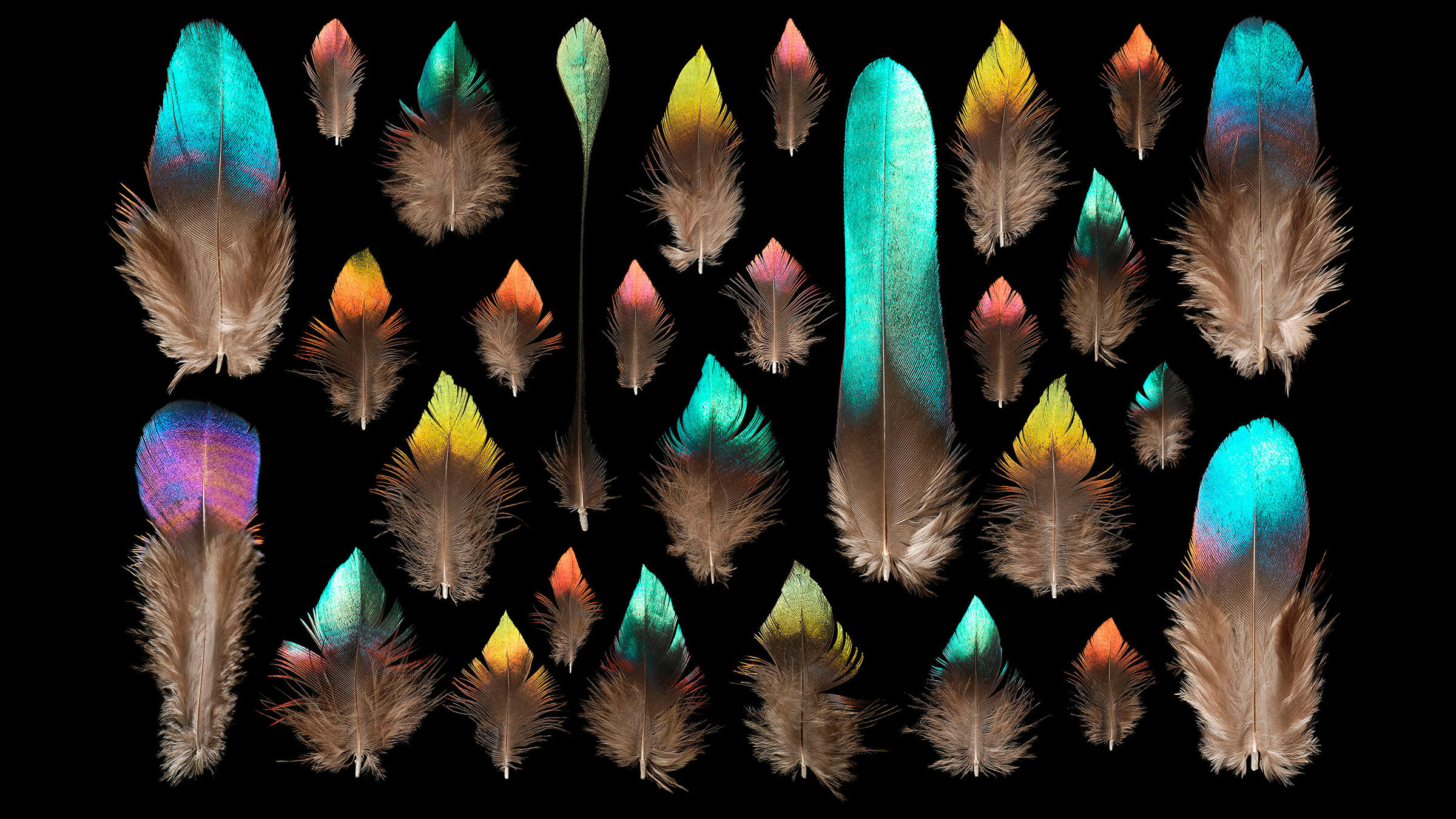 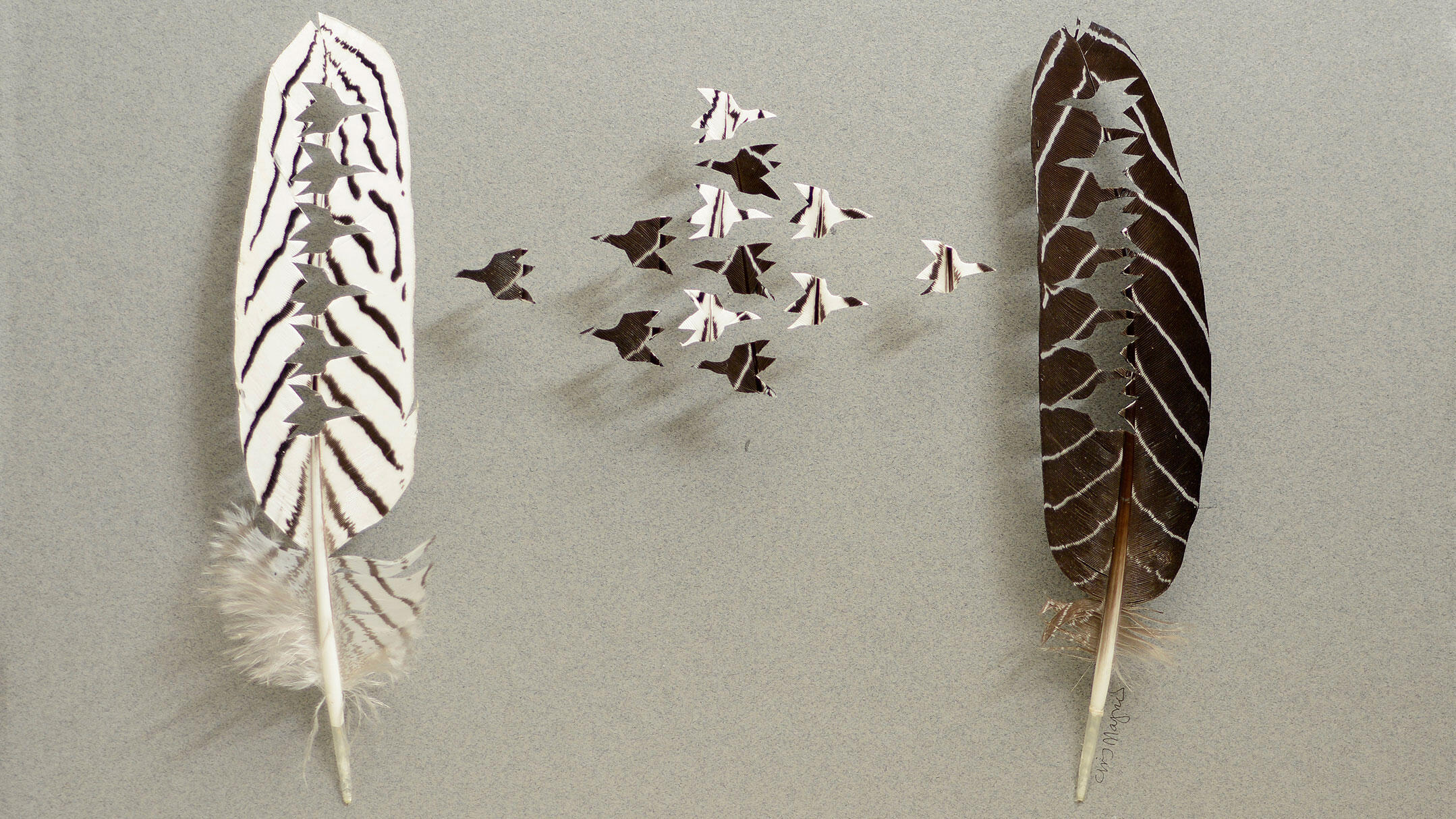