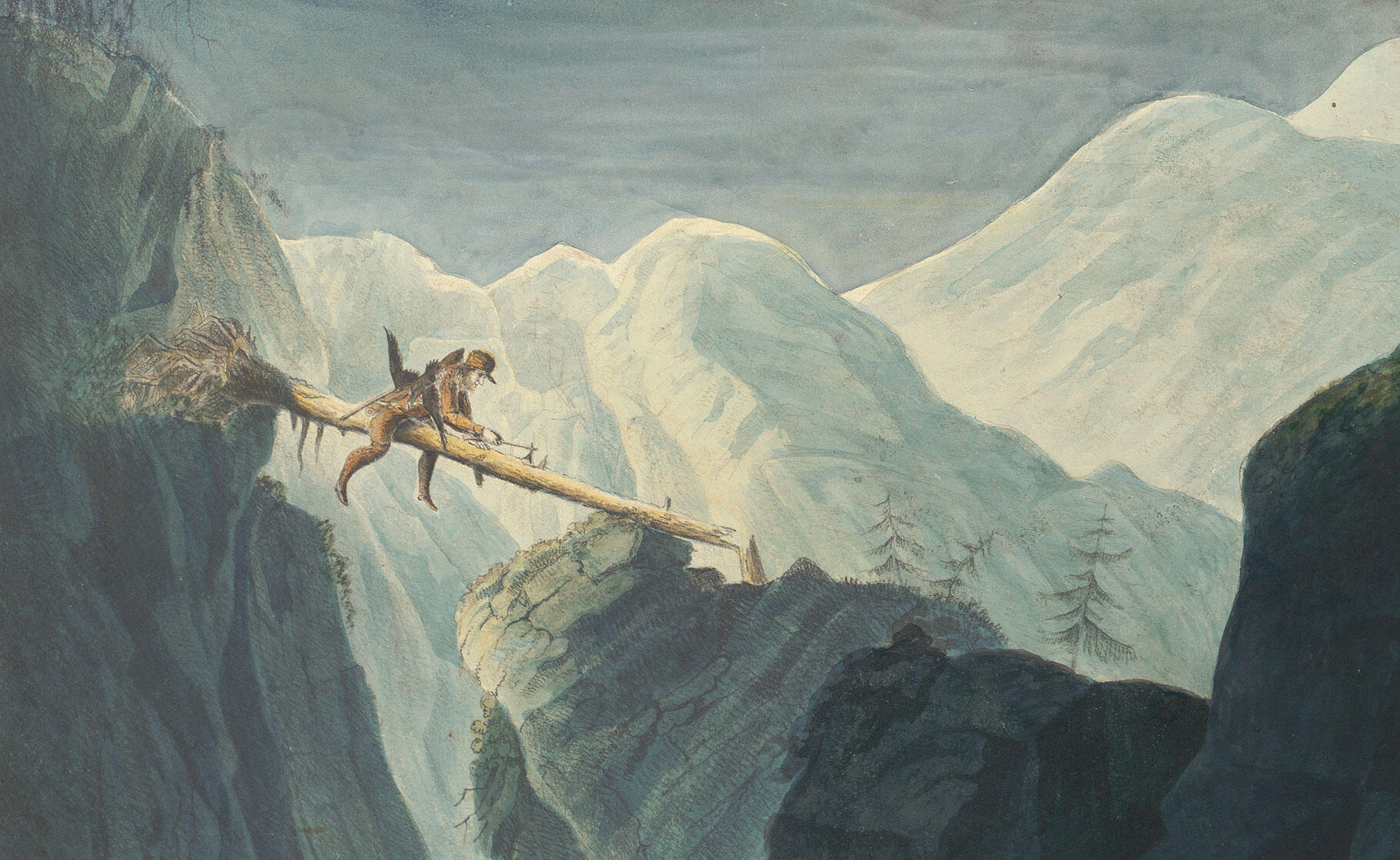 Audubon included himself in the background of his original Golden Eagle watercolor portrait. Why his image was removed, though, is a mystery. Illustration: John James Audubon/Courtesy of the New York Historical Society

The Mystery of the Missing John James Audubon Self-Portrait

The artist snuck himself into his original "Birds of America" Golden Eagle painting, but his likeness was later removed. What happened?

From 1827 to 1838, John James Audubon completed 435 large watercolor paintings of North American birds, the most ever documented at such a scale. The collection rocketed him to fame, making Audubon a household name and inspiring generations of future ornithologists and nature artists.

But few people familiar with his work know that out of the hundreds of illustrations that make up his Birds of North America series, just two—the Golden Eagle and Snowy Egret—include human figures. What's more, the person in the background of the Golden Eagle portrait is presumed to be Audubon himself. Here's where things get really interesting, though. While the more generic hunter in the egret’s background was included in the final set of now-famous prints created by printmaker Robert Havell, the man thought to be Audubon in the background of the eagle illustration vanished before publication. In his personal writings, Audubon left behind no explanation for why the image was removed, and it's a mystery that intrigues Audubon scholars to this day.

Before speculating on why the image was removed, though, it's first important to understand what might have motivated Audubon to include himself in the Golden Eagle portrait in the first place. Audubon painted from models: dead birds he pinned in positions to imitate what he observed in the wild. The birds were rendered so naturally because Audubon had a photographic memory, says Roberta Olson, curator of drawings at the New York Historical Society and a historian who has closely studied Audubon and his work. Most of the time Audubon procured his models himself by shooting them, but he wasn’t able to do so for the majestic Golden Eagle, as it was rarely seen, he wrote in volume two of his Ornithological Biography.

In the book, Audubon writes that in 1833 he traveled to Boston, where a museum proprietor showed him an injured Golden Eagle he had acquired at a market. Audubon bought the eagle to draw, but once confronted with the majesty of the bird, he was tempted to set it free. “But then, reader, some one seemed to whisper that I ought to take the portrait of the magnificent bird, and I abandoned the more generous design of setting him at liberty, for the express purpose of [showing] you his semblance,” he wrote.

Although he intended to euthanize the raptor humanely, Audubon's efforts failed and, with much inner turmoil, he ended up killing the bird with a sharp pin. “I thrust a long pointed piece of steel through his heart, when my proud prisoner instantly fell dead, without even ruffling a feather."

According to Olson, the encounter and the experience of painting the bird weighed heavily on Audubon. “He spent two weeks drawing it and after he had finished it, he had a mental breakdown because it took so much out of him,” Olson says.

The final watercolor depicts a triumphant female Golden Eagle, her claws piercing a snowshoe hare and beak open in a victorious screech. The eagle dominates the majority of the page, but if one looks closely, in the bottom left corner, you can see what is believed to be Audubon dressed as the quintessential American woodsman straddling a fallen tree trunk spanning a gorge. Strapped to his back is what appears to be a dead bird.

With no record of his reasoning, experts can only guess as to why he included himself in the painting. Olson believes Audubon might have painted himself in such a perilous position as a commentary on the terrible toll painting so many dead birds had taken on him, especially the Golden Eagle. At this time, Audubon was halfway through painting Birds of America and was exhausted from the effort. By painting himself into the Golden Eagle illustration—a piece he spent around 60 hours on, rivaled in labor only by the Wild Turkey—Olson says it could be read as an homage to the eagle’s inspirational power and the personal struggle Audubon went through when he had to kill the bird.

And what about the dead bird Audubon carries on his back? Olson says it is presumably the eagle’s mate. Just as the eagle killed the hare, Audubon killed the mate—symbolism that Olson says touches on a common theme for the artist. “Many of Audubon’s paintings comment about the cycle of birth and death in nature, which is important that the hare sacrifice for the next generation,” she says. “From death comes life.”

While all of this supports why Audubon might have included himself in the portrait, there is almost no information about why his figure was dropped from the final prints. Olson speculates that it could be because Audubon realized including himself would distract from the bird. But then why did he leave himself standing with a gun in the background of the egret portrait?

Another possibility is that Audubon didn't make the decision at all. He was an ocean away from his printmaker, Havell, who was working in England and may have taken some editorial liberties. Or, perhaps, there is some other reason. Unless documentation of the incident is ever discovered, it seems the case of the missing Audubon portrait will remain just another mystery involving Audubon's impressive legacy and work.

Correction: An earlier version of this story stated that the man in John James Audubon's Snowy Egret portrait is also believed to be Audubon. According to Olson, there is little evidence for this, and the person is likely a generic hunter painted by George Lehman, whom Audubon hired to paint the background of this portrait.  We regret the error.