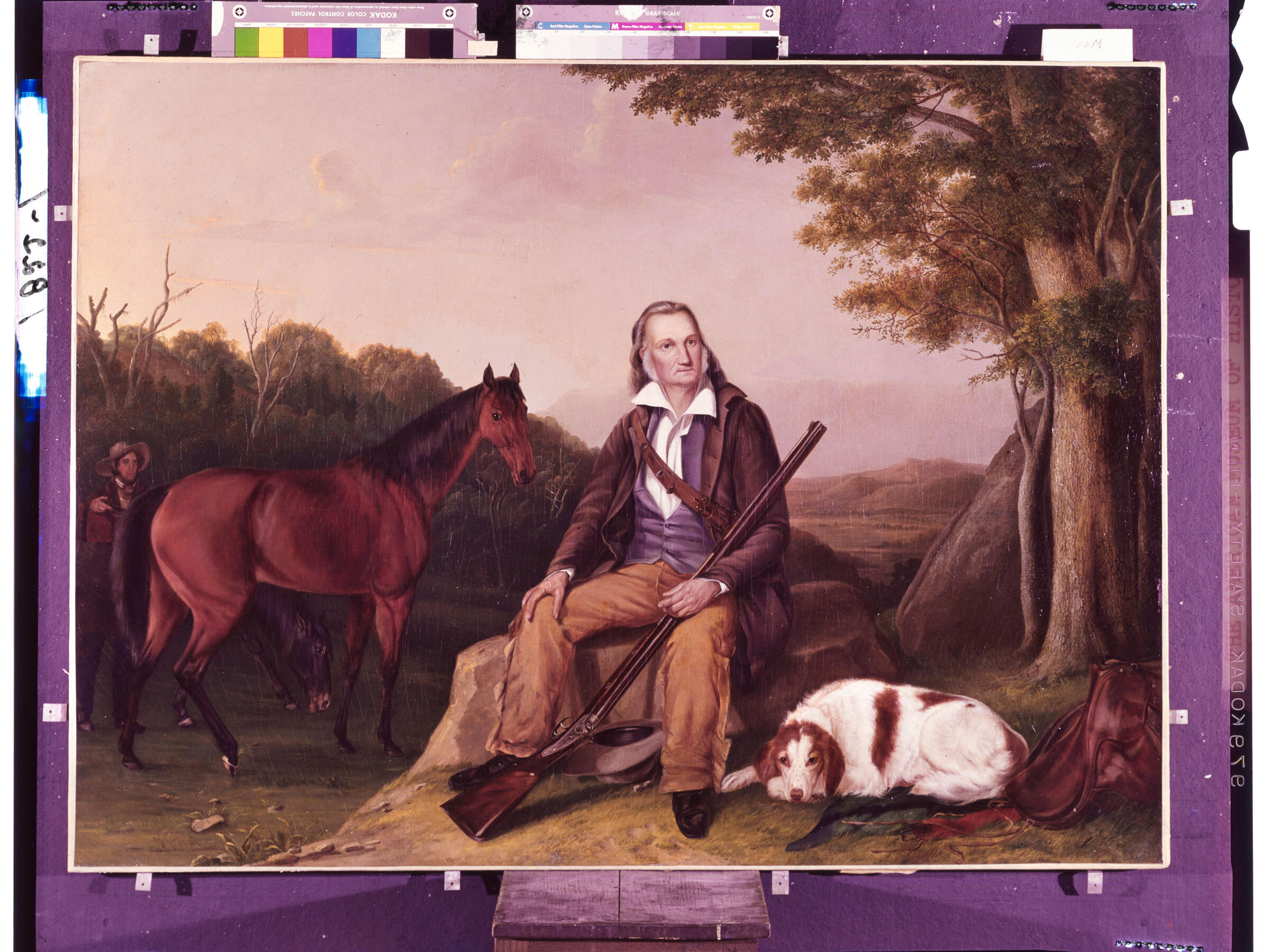 This piece, written by a historian and biographer of John James Audubon, is the first in a series of pieces on Audubon.org and in Audubon magazine that will reexamine the life and legacy of the organization’s namesake as we chart a course toward racial equity.

John James Audubon was a man of many identities: artist, naturalist, woodsman, adventurer, storyteller, myth maker. A now-legendary painter who traveled North America in the early 19th century, in an epic quest to document all of the continent’s avian life, he is above all known as a champion of birds. Today we see that legacy preserved in the National Audubon Society, but also in the cities, streets, and even birds that bear his name.

Audubon was also a slaveholder, a point that many people don’t know or, if they do, tend to ignore or excuse. “He was a man of his time,” so the argument goes. That’s never been a good argument, even about Audubon’s time—and certainly not in this one—because many men and women in the antebellum era took a strong and outspoken stand for the abolition of slavery.

Audubon didn’t. Instead, he dismissed the abolitionist movement on both sides of the Atlantic. In 1834, he wrote to his wife, Lucy Bakewell Audubon, that the British government had “acted imprudently and too precipitously” in emancipating enslaved people in its West Indian possessions. It was with remarkable understatement that one of Audubon’s earlier biographers wrote that “Lucy and John Audubon took no stand against the institution of slavery.”

They took a stand for slavery by choosing to own slaves. In the 18-teens, when the Audubons lived in Henderson, Kentucky, they had nine enslaved people working for them in their household, but by the end of the decade, when faced with financial difficulties, they had sold them. In early 1819, for instance, Audubon took two enslaved men with him down the Mississippi to New Orleans on a skiff, and when he got there, he put the boat and the men up for sale. The Audubons then acquired several more enslaved people during the 1820s, but again sold them in 1830, when they moved to England, where Audubon was overseeing the production of what he called his “Great Work,” The Birds of America, the massive, four-volume compendium of avian art that made him famous.

The Birds of America was a tremendous artistic and ornithological achievement, a product of personal passion and sacrifice. Audubon thought big from the beginning, making his work ambitious in its reach, with 435 engraved images of some 490 species, and impressive in its scale, with each bird depicted “size of life.” Audubon’s avian images can seem more real than reality itself, allowing the viewer to study each bird closer and longer than would ever be possible in the field. The visual impact proved stunning at the time, and it continues to be so today.

Even though Audubon found Black and Indigenous people scientifically useful, he never accepted them as socially or racially equal.

Although never fully acknowledged, people of color—African Americans and Native Americans—had a part in making that massive project possible. Audubon occasionally relied on these local observers for assistance in collecting specimens, and he sometimes accepted their information about birds and incorporated it into his writings. But even though Audubon found Black and Indigenous people scientifically useful, he never accepted them as socially or racially equal. He took pains to distinguish himself from them. In writing about an expedition in Florida in December 1831, Audubon noted that he set out in a boat with six enslaved Black men—“hands,” as he called them—and “three white men,” his emphasis clearly underscoring the racial divide in the boat and his place on the white side of it.

Audubon also, through his writing, manipulated racial tensions to enhance his notoriety. The tale of “The Runaway”—one of the “Episodes” about American life he inserted into his 3,000-page, five-volume Ornithological Biography, a companion to Birds of America—spins the tale of an encounter with a Black man in a Louisiana swamp. Audubon, who had been hunting Wood Storks with his dog, Plato, had a gun, but so did the Black man; after a brief face-off both men put down their weapons. Even as he described the tension easing, Audubon had already hooked into the fears of his readers. Published three years after Nat Turner’s slave rebellion in 1831, “The Runaway” presented the most menacing image imaginable for many white people—the sudden specter of an armed Black man. Audubon knew how to get people’s attention.

He also knew how to put himself in the most favorable light. The man and his family had escaped slavery and were living in the swamp, and as the tale unfolds, Audubon spent the night at the family’s encampment—companionably but also “quite at their mercy.” It was the fugitives, however, who were really most vulnerable. The next morning, Audubon took them back to “the plantation of their first master” and convinced the planter to buy the enslaved people back from the masters to which the family had been divided and sold. And that was that: Reunited but still enslaved, the Black family was “rendered as happy as slaves generally are in that country.” (Exactly what “happy” meant, Audubon did not say.) In the span of a single story—true or not, and many of Audubon’s “Episodes” were not—Audubon portrayed himself as both a savior of a fugitive family and a defender of slaveholders’ claims to human property rights.

There have long been lingering questions about Audubon’s own racial identity. His birth in Saint-Domingue (now Haiti) to one of his father’s two mistresses on a sugar plantation suggests he may have shared some measure of African descent. The truth of that may be impossible to know for sure even now. Audubon may not have known for sure himself, yet he took care to leave a specific impression. In an essay written for his sons, he described his birth mother as a lovely and wealthy “lady of Spanish extraction” from Louisiana, who went back to Saint-Domingue with Audubon’s father and became “one of the victims during the ever-to-be-lamented period of negro insurrection on that island.” Neither part is true, but both could have been useful to Audubon: Having a European mother killed by Black rebels reinforced a white identity, and in an American society where whiteness proved (and still proves) the safest form of social identity, what more could Audubon need?

Audubon made his place in American culture by creating a self-identity as outsized as his images of birds. Much of that is justified: As an artist he set a bar for realism in nature art that raised the world’s standards and continues to influence artists today. His paintings of birds and other wildlife were remarkable—full of exacting detail and often exciting drama, both of which make his work so vibrant and valuable. Although the veracity of his science has sometimes been called into question, his major written work, Ornithological Biography, remains a valuable resource and a very good read. And he left in his wake a movement of people ardent in their passion for identifying and protecting bird life, including the founders of the first Audubon societies, which took his name long after he died. But if we look at John James Audubon as a figure in history, not as a figure of his own myths, we come away with a truer picture of the man himself.

That is an important exercise, and not only for historians. Audubon’s Runaway could not escape the long reach of slavery, and neither should he—or any of us. In this critical time of reckoning with racism, we must recognize that the institution of slavery in America’s past has a deep connection to institutions in the present—our governments, businesses, banks, universities, and also some of our most respected and beloved organizations. Audubon didn’t create the National Audubon Society, but he remains part of its identity. As much as we celebrate his environmental legacy, we need to grapple with his racial legacy. If we could train our binoculars on history, now is the time to do so.

Gregory Nobles is author of John James Audubon: The Nature of the American Woodsman (University of Pennsylvania Press, 2017). He is also a member of the National Audubon Society and two local chapters, Atlanta Audubon and Michigan Audubon.