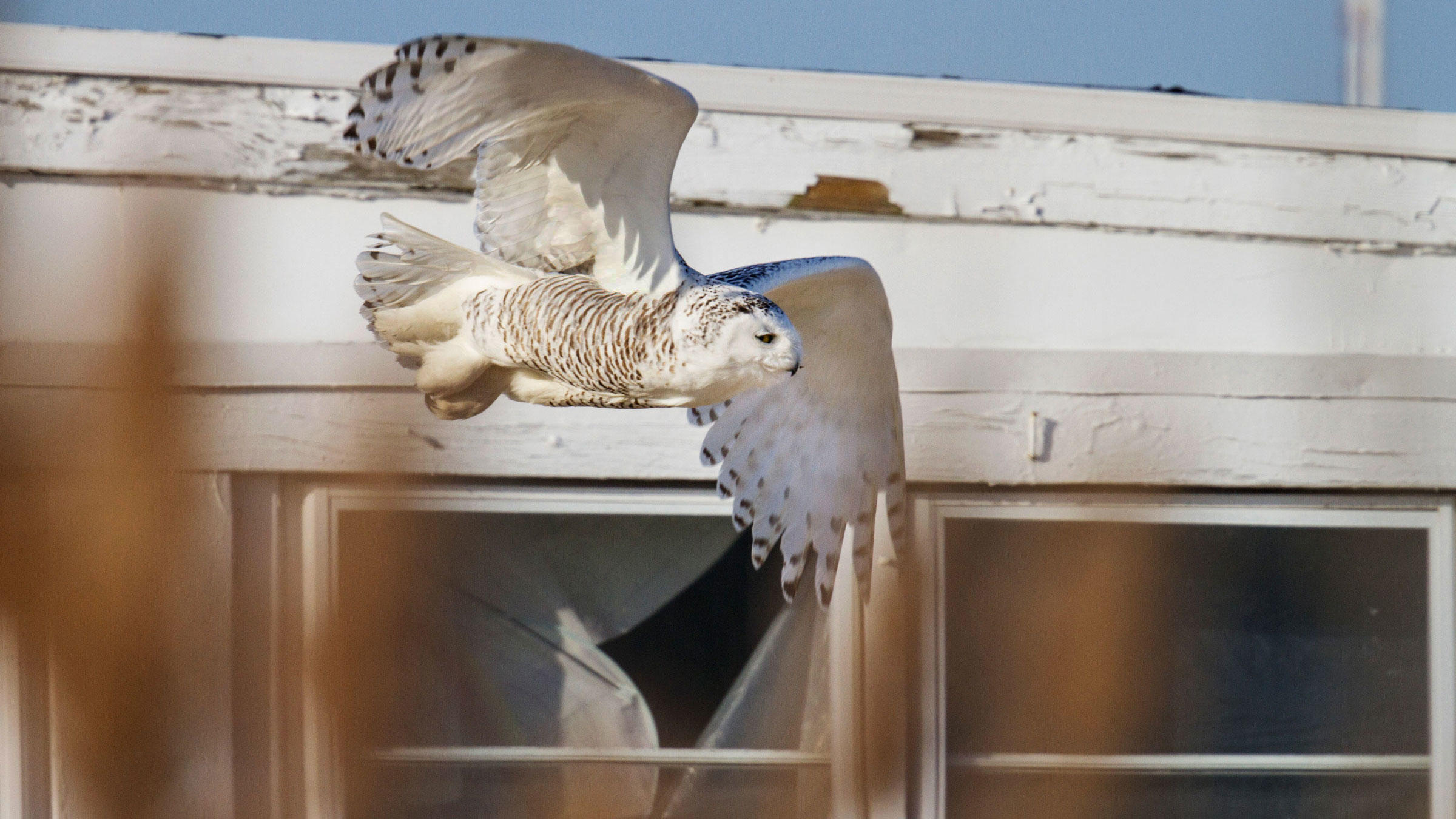 For the second year in a row, a Snowy Owl irruption has led to numerous sightings of these great raptors, south of their usual range. This one was photographed in Breezy Point, Queens, New York City on January 25, 2015. Photo: Francois Portmann

The Return of the SNOWstorm

Experts continue to track Snowy Owls through yet another southern irruption.

It's been a snow-white winter in a lot of the Northeast and Great Lakes, and in more ways than one. Along with record cold and blizzards, we're in the grip of the second significant irruption of Snowy Owls in two years, extending the window of opportunity for scientists trying to learn more about this huge Arctic raptor.

Last winter, the region from Minnesota to Newfoundland witnessed a extraordinary Snowy Owl invasion, the biggest in nearly a hundred years.

As a result, about 30 of us—scientists, bird-banders, wildlife veterinarians, pathologists, and many top Snowy Owl researchers—rapidly pulled together Project SNOWstorm. This all-volunteer, highly collaborative effort was designed to track and study the irrupting owls. We wanted to learn more about their ecology and the threats they face while they're wintering down here.

The results (some of which we detailed in the March/April 2014 issue of Audubon) were spectacular. Spending long, cold hours in the field, we live-trapped 22 owls between Minnesota and Massachusetts, then tagged them with high-tech GPS-GSM transmitters, and followed their movements in astounding detail. The lightweight units continually log the birds’ locations in their memory banks and periodically send those data to our computers through a cellular network.

Our data showed that some of the owls moved hundreds of miles in a few weeks, up and down the Atlantic coast, while others remained on the same Midwestern dairy farms or prairies all winter.

We were also astonished to learn that several of our tagged owls spent the bulk of the winter on the frozen surface of the Great Lakes, far off shore. These young owls were echoing a behavior that has been only recently documented among some adult snowies. While wintering on the Arctic pack ice, those adult birds hunt flocks of sea ducks that squeeze into permanent, open-water cracks called polynyas.

Our main focus was on tracking live owls, but even those that were found dead have given us fascinating insights. Our team of wildlife vets and pathologists performs necropsies on recovered Snowy Owl carcasses, determining the causes of death and testing their tissues for toxins and contaminants. Samples of their feathers, blood, and tissue are being used for genetic analysis; by examining stable chemical isotopes in them, we can also find out exactly where in the Arctic the birds came from, and changes in their diet over time.

We've found (contrary to conventional wisdom) that the owls were not thin and starving, but actually extremely fat and well fed. But many are also carrying a witches' brew of environmental contaminants in their tissues, from anticoagulant rat poisons to methylmercury, an air pollutant created in part by burning fossil fuels. Methylmercury can cause reproductive and behavioral problems in birds, including owls.

We knew that many young birds fail to survive their first year, but still the losses were tough. One individual was captured at Philadelphia International Airport and relocated 50 miles west to pastoral Lancaster County, Pennsylvania. It flew back to the airport, and despite our efforts to retrap it, was struck and killed by a jet.

Two other owls drowned by high winds and waves in the wake of a powerful nor'easter along the Massachusetts coast. A fourth bird died of undetermined causes at an open-pit gold mine in western Quebec.

In March and April, the surviving tagged owls started to move north. They quickly migrated past the fairly limited cell network in southern Canada, and back to the Arctic. But their transmitters continue to log GPS data every 30 minutes around the clock, storing it until they came back into cell range.

We hoped that some of the 2013-14 class of owls would eventually return—we just weren't sure how many, or when. Snowy Owl irruptions are sporadic and unpredictable, but the transmitters can store at least 12 years' worth of data. We could afford to be patient.

But we didn’t have to wait long. To our surprise, this winter has provided another major irruption of snowy owls in the East and Midwest—although not as intense as last winter's. Another difference: this irruption is centered more on the western Great Lakes, rather than the Northeast.

At least five of our tagged owls from last year—Erie and Millcreek, originally caught on the shores of Lake Erie; Century, captured at Logan Airport in Boston and later released on the northern Massachusetts coast; Braddock, tagged on Lake Ontario; and Monocacy, found in Baltimore—have come south again this winter, allowing us to download their stored summer data.

Several of the owls spent the summer in the same general area of the Ungava Peninsula in the subarctic of northern Quebec, a land of treeless tundra, glacier-scoured lakes, and herds of caribou. Erie, on the other hand, migrated west of James Bay and spent his summer along the southern shore of Hudson Bay, in Ontario's remote Polar Bear Provincial Park. Some of his movements trace curlicues on the waters of the Hudson Bay. This suggests that he was riding icebergs or ice floes that were swirling with the winds and tides. Braddock went even farther north into Nunavut, Canada.

Although she spent the summer in the remote subarctic, Monocacy has proven to be a decidedly urban owl down here. She spent last winter in downtown Baltimore, and had to be relocated from LaGuardia Airport in Queens this winter. Moved to the empty barrier beaches of Long Island, she bee-lined back to Brooklyn and then Bayonne, New Jersey, on the industrial waterfront of the Hudson.

Meanwhile, we’re actively tagging more owls this winter. We started with Delaware, a female owl that was injured at a Maryland airport last winter and spent the summer in rehabilitation. She was released with a transmitter in early December on Assateague Island, Maryland, Once we knew that she was adjusting well in the wild, she was retrapped and had her transmitter removed.

But it's been more of a challenge this year, in part because many of the owls are adults—still fairly naive and trusting by the standards of most wild birds, but cagier and harder to trap than last year's guileless juveniles were.

I've spent days on the shores of Lake Erie, trying to lure Snowy Owls into my bownet through sheets of softly falling snow. One bird, in the shadow of the Pierhead Lighthouse at Erie, Pennsylvania, swooped and dove and hovered over the lure, even landing some distance away and waddling almost into the net—but never allowing itself to be caught.

Others, on the New Jersey coast, made repeated passes before heading into the marshes to hunt rabbits and rodents. One made a low, sweeping dive, almost landing on what it thought was a strange driftwood log, but which was really me, huddled in the dunes and watching his approach breathlessly.

Despite those setbacks, we have managed to tag seven other owls this winter in Michigan, Wisconsin, Ohio, Maryland and New York, and we plan to tag more in Maine, New Jersey, and, Massachusetts. We're making a special effort, in cooperation with the USDA's Wildlife Services department, to tag Snowy Owls that are being relocated away from airports, to better understand how to keep them from returning to these dangerous environments.

Project SNOWstorm has been funded entirely by private contributions and donations from birding organizations. Everyone involved with it volunteers both their time and expertise. To learn more about our work go to www.projectsnowstorm.org. There you can also follow the movements of all of our tagged owls through incredibly detailed, interactive maps.