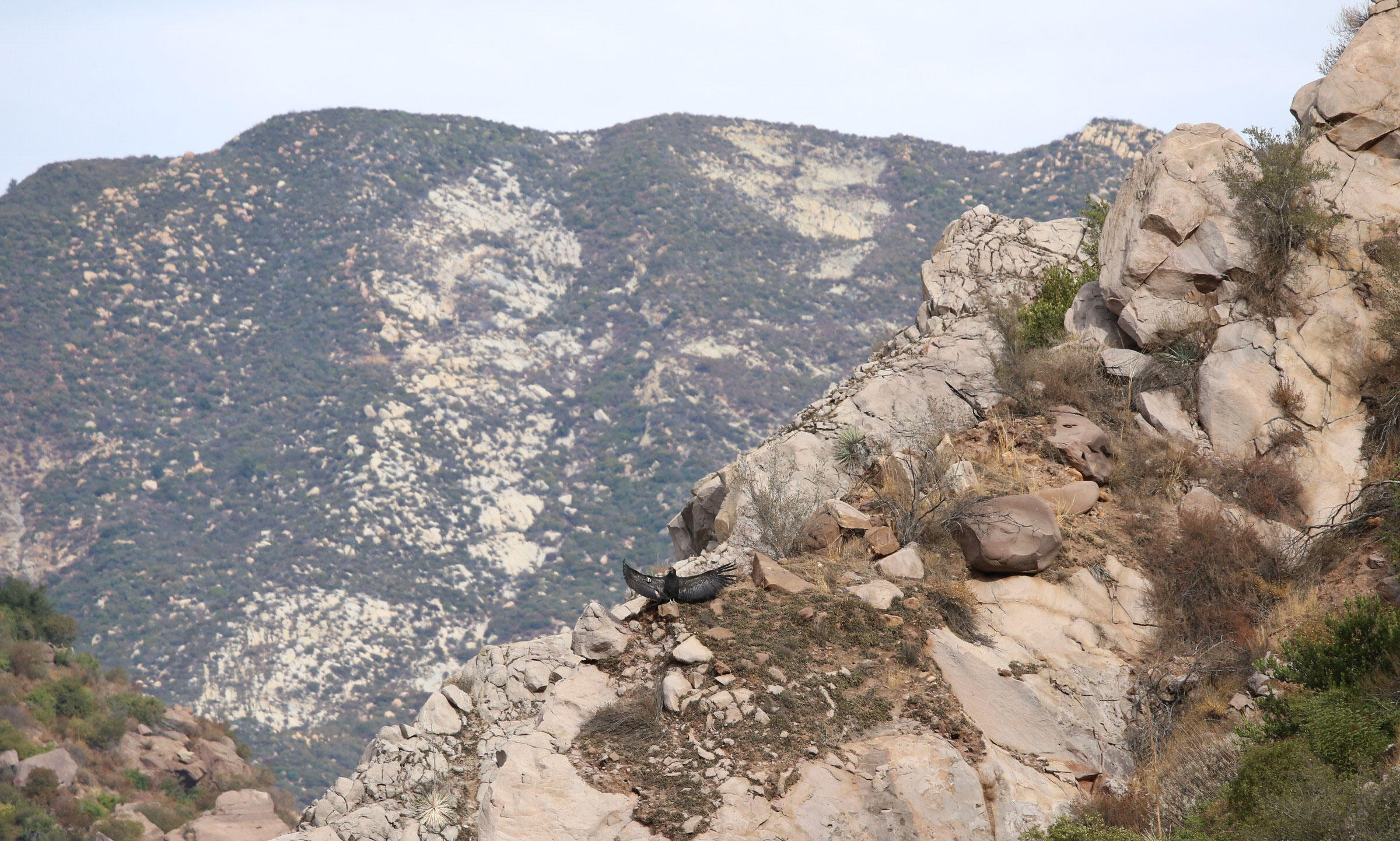 The Search and Recovery of Condor Chick 871, Wildfire Survivor

The canyon smelled of campfire smoke when a team of biologists arrived at the Sespe River, a slow-moving, boulder-littered stream about 50 miles north of Los Angeles. The western side was blackened and covered in ash from the Thomas Fire, the largest fire ever recorded in California. Prickly pear cactuses drooped on the denuded hillsides, and oak trees still stood in a few spots that avoided the worst of the blaze.

The biologists from the U.S Fish and Wildlife Service’s Condor Recovery Program were on the trail of Condor 871, the eight-month-old California Condor chick that—until recently—lived there. Last month, the Thomas Fire burned over the chick's nest located in the canyon. In total, the blaze scorched 440 square miles, destroyed over 1,000 structures, evacuated 100,000 residents, and required 8,500 firefighters from December 4 until the fire's full containment January 12.

In the days leading up to the fire, a live video feed from the nest, which had a dedicated online following, showed 871 taking short practice flights, but she had never truly flown. Joseph Brandt, a wildlife biologist with the recovery program, said chicks typically leave the nest much earlier, but for some reason 871 seemed to be waiting until the last minute.

As the fire approached, the biologists confirmed that she was still alive by tuning into the radio signal emitted by a transmitter attached to her wing. But when the fire reached the nest, her signal vanished.

With a wingspan of nine-and-a-half feet, California Condors once soared over most of the western United States. But by 1982 the population dwindled to 23 birds largely due to lead poisoning caused by eating animal carcasses containing lead bullets. The U.S Fish and Wildlife Service captured the remaining condors in 1987, and five years later started releasing them back into the wild. By 2016 the wild population had grown to 276 condors.

Even though the fire was intense, Brandt felt optimistic that Condor 871 had survived. In 2010, he presented data at an ornithology conference showing that since the reintroduction of condors in Southern California, wildfires had burned six active nests, and five of those chicks survived.

“These wildfires are something that condors are adapted to,” he said. “For as long as there have been condors, there have probably been wildfires in this part of California.”

He had more recent evidence, too: Five days before the search, another member of the Condor Recovery Team had picked up 871’s signal while hiking along the canyon’s ridge. And in the days following the fire, a GPS unit on her mother’s wing sent back a series of pings from the east side of the river. Brandt suspected that’s where the chick was.

Lines of red fire retardant still stained the sides of the canyon as the group crossed the river on January 2, about two weeks after the fire burned through the area. Nadya Seal Faith, a research associate at the Santa Barbara Zoo who works closely with the recovery program, switched on her radio receiver and tuned to the frequency for 871’s transmitter. If the condor was nearby, she would have heard a consistent beep, but the speaker emitted only static. They kept walking, kicking up small clouds of ash with each step.

Photo: Condor 871 practices flying near her nest before the fire. Courtesy of USFWS

Less than a mile from the car, Seal Faith spotted two adult condors perched on a rocky ridge above the river. Nylon tags printed with large numbers identified them as 871’s parents. The chick couldn’t be far away now.

Seal Faith and Brandt scrambled onto a boulder above the river to look for the chick. They scanned the eastern side of the river, which had almost entirely escaped the fire, and Seal Faith pointed towards a black spot about 100 yards above the canyon floor. There, the chick—now a fledgling, and nearly as large as her parents—perched on a rocky ledge on the unburned side of the canyon.

She had survived the fire, though with slightly tattered feathers. Upon closer inspection, Brandt said the tips of her primary feathers looked like they had been singed. “It may be that the chick fledged right when the fire was burning most intensely,” he said. Otherwise, the fledgling appeared to be in good health. She stretched her wings, and hopped from one rock to another.

Everyone involved with the recovery program had been rooting for Condor 871, and they were thrilled to find her alive. Thankfully, though, the condor population has grown large enough that losing one chick in a fire wouldn’t have a huge impact on the survival of the species—a fact Brandt considers a sign of success.

Wildfires aren’t a big threat to the condor population, he says, but that doesn’t mean it has fully recovered. The major threat is still lead poisoning. Since the reintroduction of condors in Southern California, lead has killed 10 times as many condors as wildfires have.

Since the reintroduction of condors in Southern California, lead has killed 10 times as many condors as wildfires have.

In 2013, the California legislature banned the use of lead ammunition in the state, an effort spearheaded by Audubon California. In the final days of the Obama administration, the U.S. Fish and Wildlife Service banned lead ammo and tackle use on its land; it was overturned by a newly-confirmed Interior Secretary Ryan Zinke on his first day in office.

Members of the Condor Recovery Program spend much of their time trying to save condors from lead. They capture all the condors in Southern California twice a year and test their blood. Poisoned birds go to the Los Angeles Zoo for chelation therapy, the same treatment lead-poisoned humans receive. Without this kind of intervention, condors probably wouldn’t survive on their own in the wild.

But lead rarely draws as much attention as wildfire. “This is the massive catastrophe versus the insidious poison,” Brandt said. “You wish you could draw that attention about lead.”