The Woman Behind ‘Birds of America’ 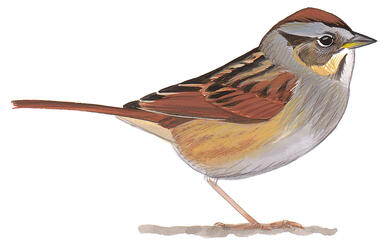 Lucy Bakewell Audubon was a determined figure who became the primary breadwinner for her family—which included her not-yet-famous husband—and pulled them through financially desperate times. In suppport of John James Audubon's artistic talents, she became a teacher and even founded a school at a time when women rarely earned wages. Oh, she also managed a household, bore four children, and tragically saw two die in infancy. Meanwhile, her life partner was absent for months, or years, at a time.

What was her husband doing? He was off painting birds!

Dowd, author of a new book, Audubon’s Sparrow, tells the Audubons’ story in the time leading up to the publication of Birds of America. The twist is that it's written largely in Lucy’s voice, through imagined diary entries, letters, and poems deeply informed by historical research. Years earlier, Dowd happened to pick up a biography of John James from her own husband's nightstand. She quickly became more intrigued by Lucy's story than his. In time, Dowd decided to write what she calls a “biography-in-poems” focused on her.

“Without Lucy, I’m not sure we would have known John James Audubon," Dowd says. "She was such a strong figure, and they were so much a couple. He depended on her very much.”

Most of what historians know about Lucy's reality is through the words of others. In Audubon’s Sparrow, which is due out for release in late April, Dowd presents what she imagines would have been Lucy's perspective, making it a deeply feminist retelling.

For example, towards the end of the book, Lucy offers a diary entry upon her husband's return to the United States from Europe, where he had been away for years working to find a publisher for his works. Records and letters tell us that he waited in New York, asking Lucy, who was living in Louisiana, to meet him there. But she insisted he journey to her, which he eventually did—an act Dowd believes put their marriage back on solid ground. In Audubon’s Sparrow, we can imagine the frustration of what she might have been feeling.

Yes, but when am I to see his face?

First he’s to the piney woods, the seacoast.
Thou knowest I must draw hard from Nature
every day that I am in America.
Detained now in New York by matters at the Lyceum,
and soon to Philadelphia—where he’ll pause
for me to join him. Come! Hurry!

How can he not understand my situation—
completing the lessons, collecting late tuitions,
money we have need of more than ever now...

And skins and plants he demands I gather—
whole trunks-full he’ll require for his future work,
and for his friends in England and in France,
who’d fancy a bit of wildlife from the Bayou.

He must not try to send a son to help me.

Let him come himself.

Of course, the central question Dowd’s book poses—“what does it mean to sacrifice for someone else’s art?”— applies far beyond Lucy Bakewell Audubon.

Many of history’s most famous creative figures were supported or cared for by women who sacrified to foster their achievements. Often, it was that woman's loving choice to do so, as to Dowd, Lucy’s own story illustrates. But such a choice is also impossible to separate from the societal expectations that steer women on this path.  “All of the artists were men, all of the composers were men, everything was men," Dowd says.

The book gets its title from a Birds of America plate of a Swamp Sparrow that is signed by the engraver in Lucy's name. Dowd and others have wondered: Was it Audubon’s complicated joke, equating his “tall and spirited” wife with a bird he described as “timid” and “destitute of song.” More likely, Dowd thinks, the gesture was a simple tribute to how much she meant to him. We'll never know, but Dowd’s book offers a remedy by letting us hear Lucy's song.

The third and final installment of The Complete Flock series opens March 6.