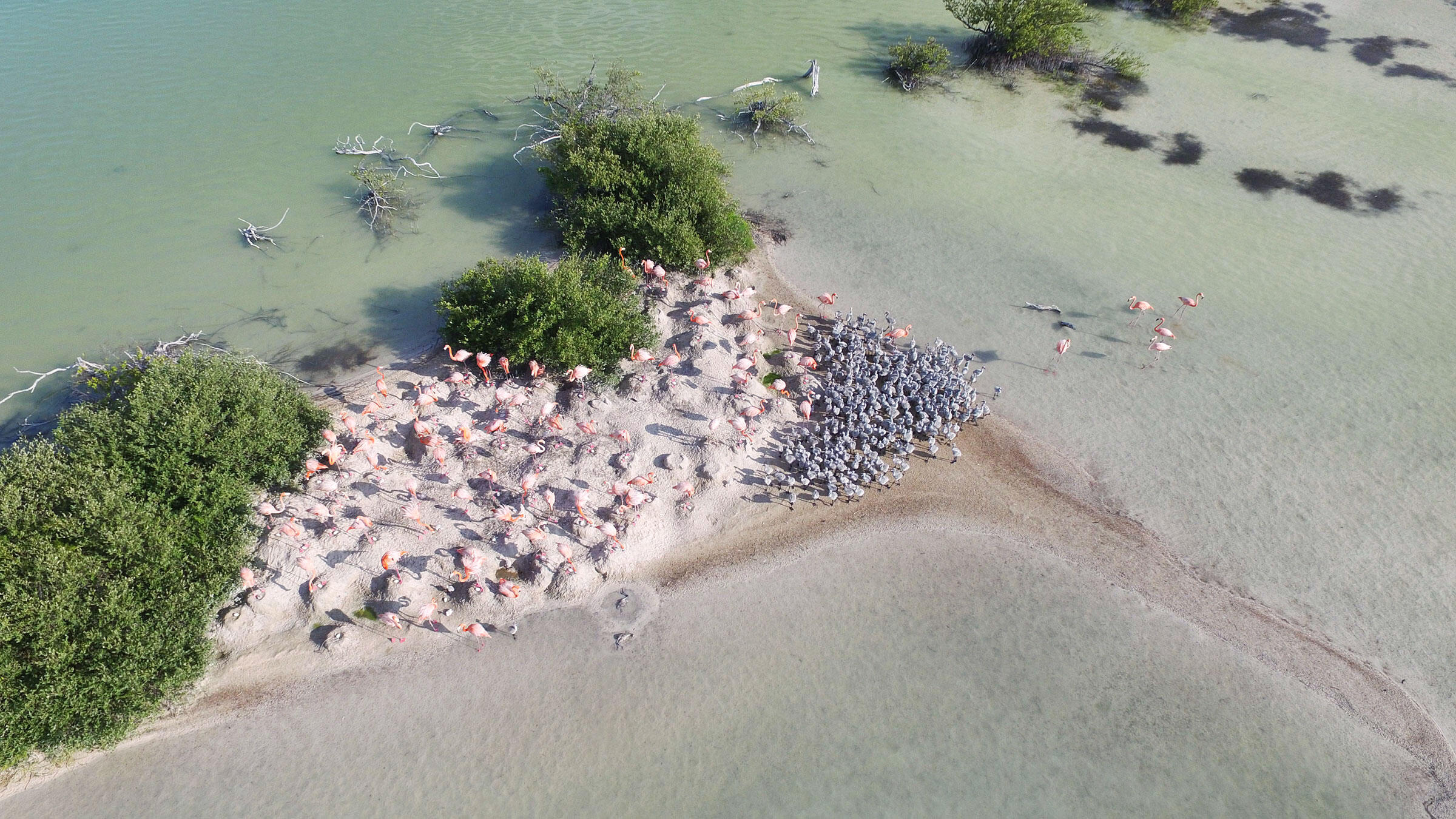 One of the Caribbean’s greatest conservation success stories began in the early 1950s, when ornithologist and conservation activist Robert Porter Allen followed a rumor to the southernmost island in the Bahamas, where he discovered one of the last breeding colonies of West Indian Flamingos.

“Allen ran into my grandfather and his brother Jimmy, hunting flamingos out in the saltwater lagoons,” says Randolph “Casper” Burrows, who has spent most of his life on Great Inagua Island. “Hunters would wait until they were nesting. They used long sticks and dogs and shotguns, and when they came in the flamingos would panic and trample each other. Then you’d have wild boars coming in later to eat the eggs.”

Nowadays, Burrows specializes in showing visitors the reclusive flamingos in their natural habitat. He’s one of several islanders who participated in Audubon’s Bird-Based Tourism Initiative, an innovative guide-training program that promotes conservation in Latin America and the Caribbean by creating economic opportunities in regions with exceptional bird life and biodiversity.

Great Inagua and Little Inagua islands are what Bahamians call “out islands” or “family islands,” off the beaten path for tourists and most Bahamians. Inagua’s relative isolation and unusual habitats make it an attractive environment for American Flamingos, as well as more than 130 other bird species.

At the beginning of the 20th century, the West Indian Flamingo (also called the Rosey, American, or Caribbean Flamingo), was nearly extinct throughout its range. On Great Inagua Island it was pursued by hunters for food and sometimes feathers.

When Audubon’s Robert Porter Allen arrived in the early 1950s, there were just “a few hundred scraggly birds” on Great Inagua Island, he reported. Allen, who is known for his successful efforts to rescue the Whooping Crane, began paying Inagua islanders to protect the flamingos, and started a campaign to convince locals to eat wild pigs instead.

Through the work of Allen, the National Audubon Society, and other conservationists, the Bahamian government created Inagua National Park in the mid-1960s, and established the Bahamas National Trust, which manages important habitats throughout the country. The park is now a Wetland of International Importance under the Ramsar Convention and an Important Bird and Biodiversity Area (IBA).

Due to these and other conservation efforts, the flamingos now outnumber humans on Inagua by a factor of about a hundred to one.

Only about 800 people live on Great Inagua, the third-largest island in the Bahamas. In Matthew Town, the only settlement on either island, there are no casinos or luxury hotels, though a handful of guesthouses offer rooms to visitors. The main industry on the islands is a Morton saltworks, which harvests a million tons of salt from giant evaporative saltwater reservoirs called “pans” that border the park.

The largest of the islands’ three national parks is Inagua National Park, which covers 45 percent of Great Inagua Island. A day in the park with Burrows is a uniquely colorful experience, with white sand and blue waves complemented by abundant pink feathers.

“We have to be careful because it’s easy to spook the birds,” Burrows says, as he carefully leads visitors to the edge of the scrublands surrounding Lake Windsor. About 200 feet away, several dozen flamingos stand stone-still in the shallows, facing into the breeze and ready to take flight.

Burrows notes that flamingos aren’t born pink; they turn that color when they reach adulthood, due to their steady diet of brine shrimp, which thrive in the salt pans. As filter feeders, the flamingos help to keep the lagoons healthy by keeping brine shrimp and other organisms in check.

Burrows looks up toward a line of 50 or more flamingos, flying toward the opposite side of the lagoon. “If you have low clouds and a really big flock, and the sun is just right, the reflection of the light off the backs of a big flock can turn the bottom of the clouds pink,” he says.

Burrows has helped his clients discover these birds and many others. But he says that “the bright pink birds” are still his favorite.

“We had 15,000 to 20,000 hatchlings this year, which means the total population may be getting up close to 100,000,” he says. “I feel so fortunate that I’ve been able to see them come back strong, in my lifetime. I think we’re looking at a bright future for this bird.”

Getting there: Visitors either fly into Matthew Town, which has the only airport, or arrive by private sailboat. The island has only a handful of hotels and resorts.

Where to visit: Inagua, which bills itself as the Birdwatching Capital of the Bahamas, is home to three national parks and reserves, as well as one of three remaining kerosene-burning, hand-cranked lighthouses in the Bahamas. Visitors can also explore beaches and limestone caves, and observe turtles on Little Inagua (a protected habitat for endangered sea turtles).

When to visit: Engage an Audubon-trained guide in late winter and early spring to see the flamingos’ head-bobbing, wing-flicking courtship rituals. A few weeks later, watch the adults feeding and standing guard over their fluffy white chicks.

Make a plan: This suggested Bahamas itinerary brings you to several distinct habitats that collectively provide an excellent representation of the country’s birdlife, including all of the endemics and West Indian specialties in the Bahamas.