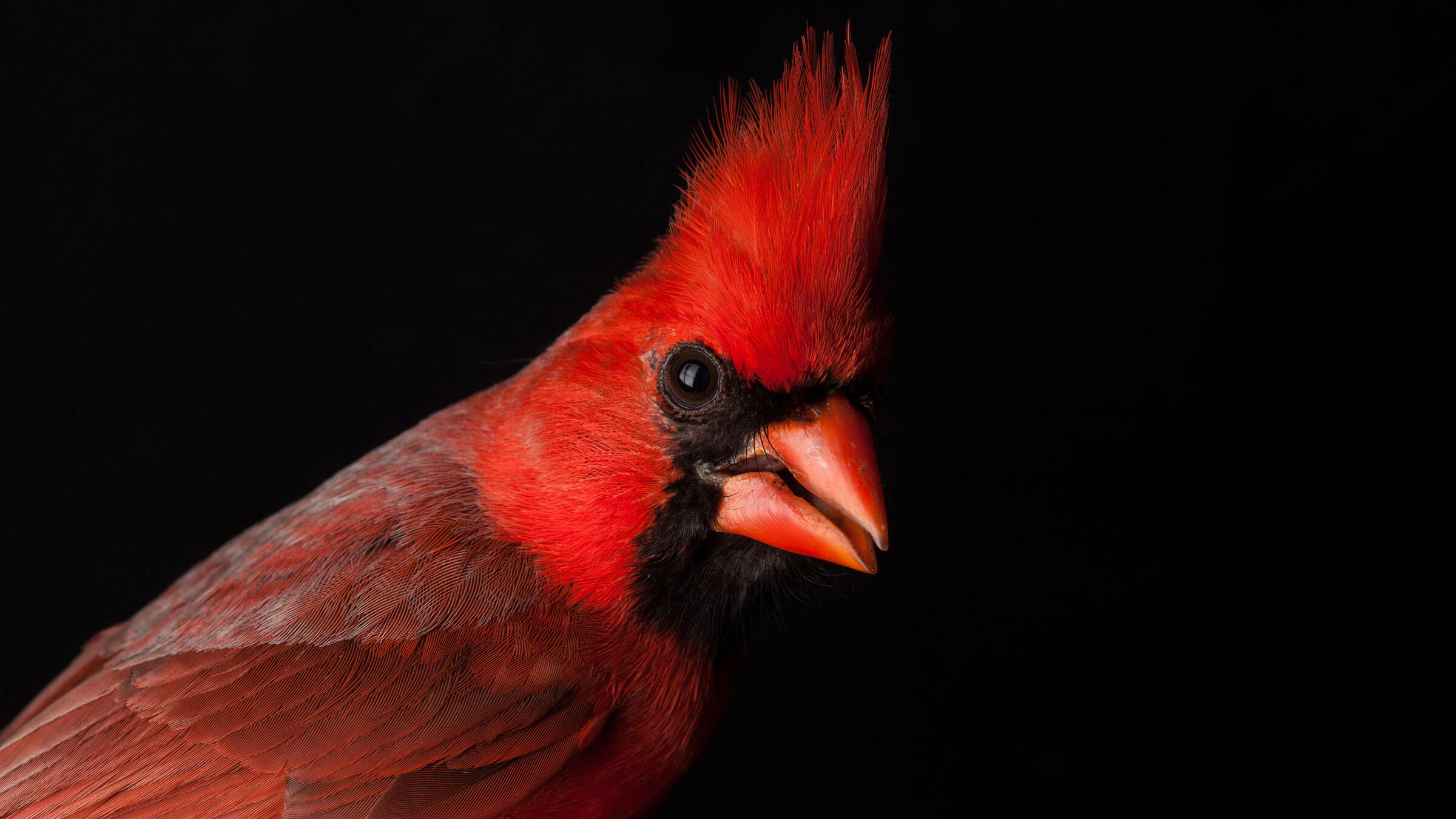 These Vivid Bird Photographs Nearly Fly off the Screen

“Does the world really need another photo of a cardinal?”

That's the question Sean Graesser asked himself a few years ago as he carefully untangled a Northern Cardinal from a mistnet in Connecticut. The ornithologist, bird bander, and photographer typically turned his lens on neotropical migrants—birds (including hummingbirds, warblers, and flycatchers) that, like him, split their time between the United States and Central American rainforests.

But the delicate beauty of the common, resident cardinal struck him. There was the red mohawk, of course, but there was also "the subtle tinge of grey in the back plumage," he says. The bird also had "this amazing beak that’s like a vicegrip on your fingers." Right then, he decided that, indeed, the world needed another photo of a cardinal. So he held the bird up to a black backdrop and took his shot.

Graesser’s portrait of the Northern Cardinal (pictured above) is part of his ongoing project to exhibit the lives of birds. In some images, he makes familiar U.S. birds unfamiliar through new perspectives and close-up portraiture. In others, he imitates John James Audubon’s detailed illustrations of birds posed artfully in their natural habitat that nearly fly off the page.

"To this day people are drawn to Audubon's prints because there's so much life and movement in them, even though there's a singular pose," Graesser says. "He invoked a feeling that you were looking into the life of the bird he was painting."

Working with a camera instead of pen and ink, Graesser brings this same spirit to his photographs, which were recently featured on the National Audubon Society Instagram account. Audubon spoke with Graesser (who is a seasonal employee of Audubon Connecticut) to learn more about his avian subjects and how he blends art and science in his photography. 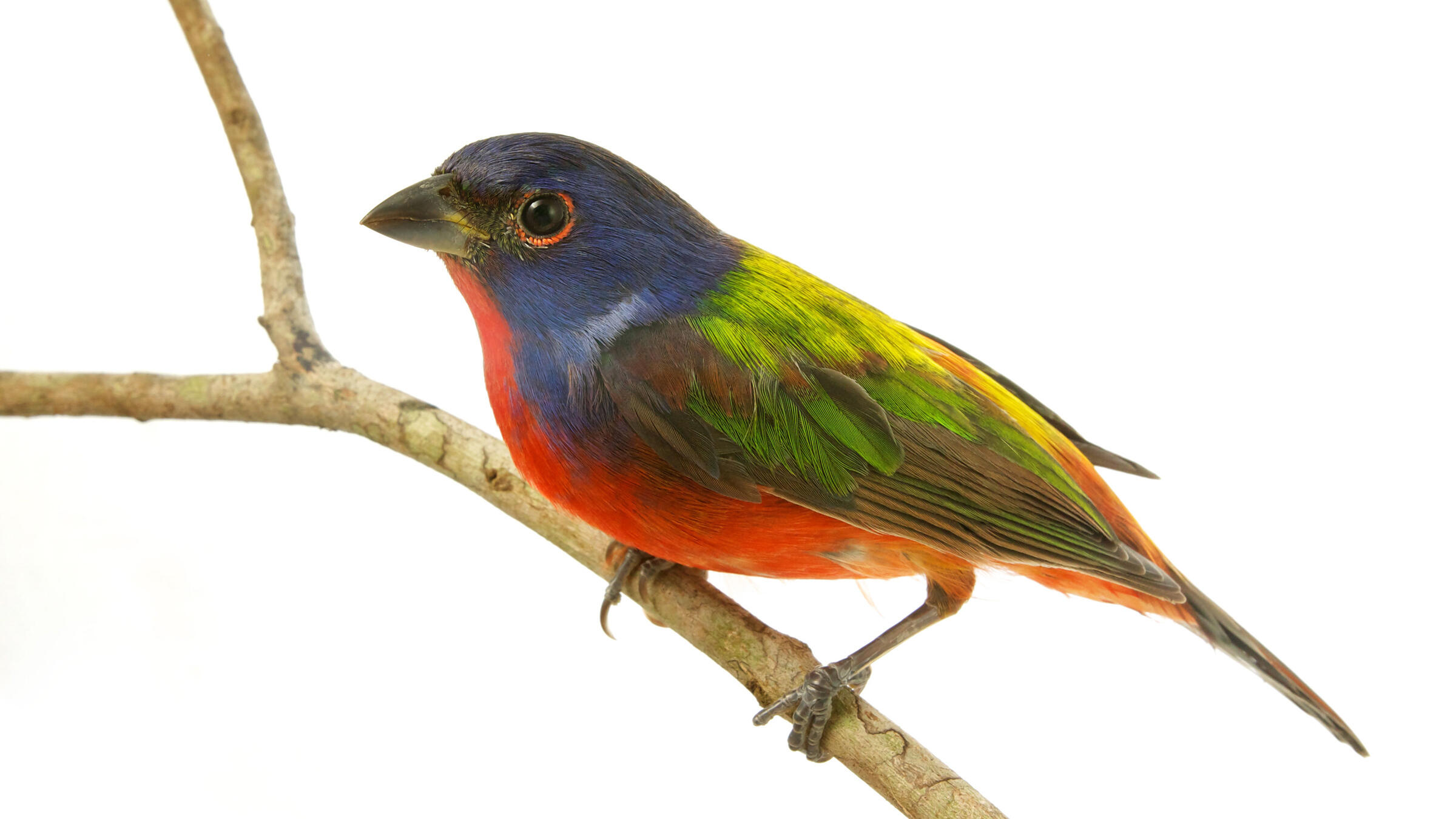 Even in the tropics, Painted Buntings are a rare sight. "The males skulk around and don't really show themselves," Graesser says. But he was determined to get a shot no matter how long it took. One year, he banded birds in Costa Rica for nearly three months and chased buntings in his spare time. Finally, on his penultimate day in the field, this male decided to cooperate. "He came onto a perch just on the edge of a clearing, and I was able to get that shot," Graesser says. "It took me a long time." 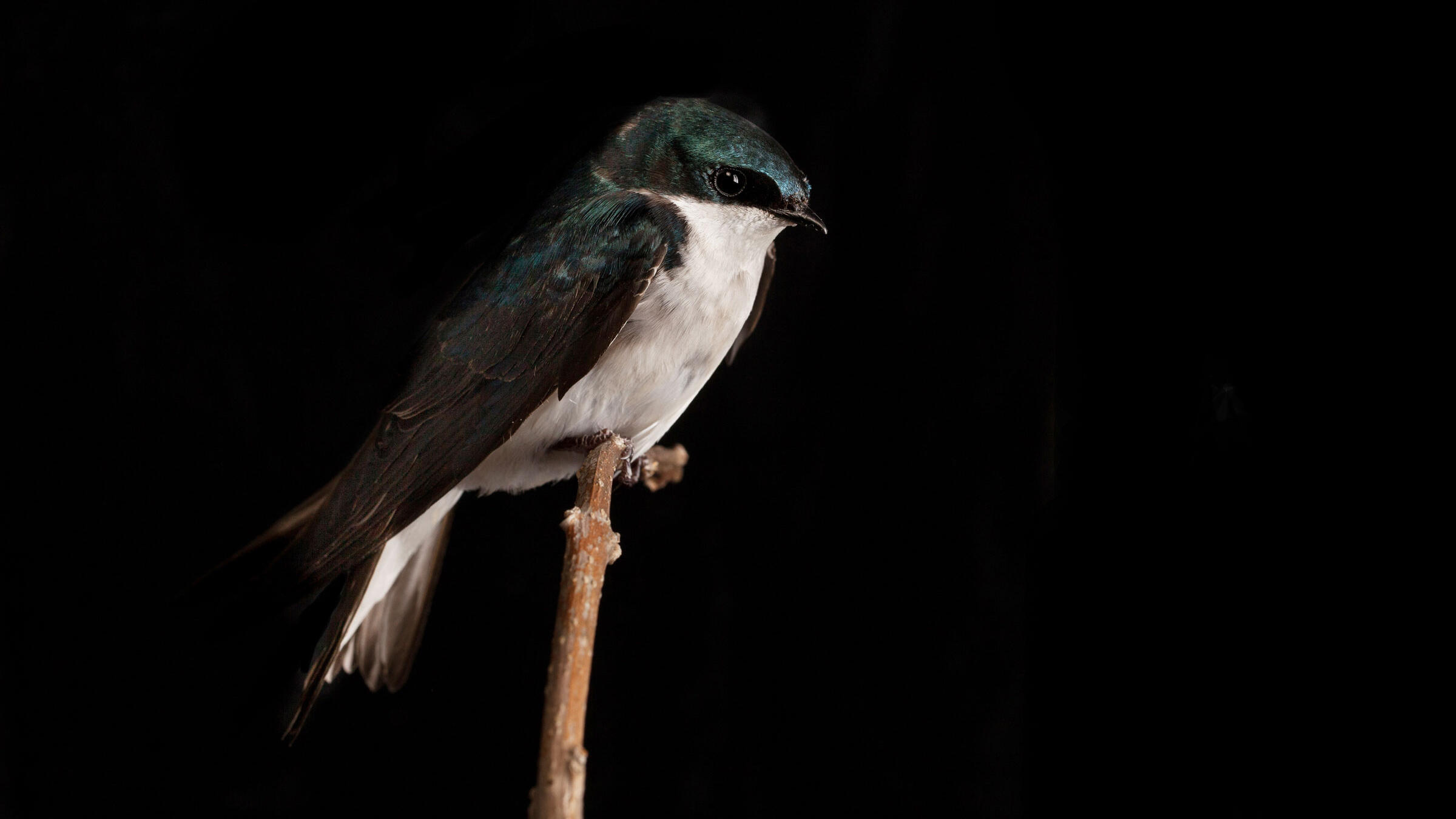 Graesser shoots his portraits in front of white or black backdrops to bring out the birds' natural coloring. This isn't difficult when he's banding birds; he simply holds the bird in his hand and positions it in front of the backdrop. Photographing active birds takes more patience—and often it takes the right bird, too. This Tree Swallow routinely visited this perch and never seemed bothered when Graesser walked by. So he placed the backdrop behind the perch and waited. "Sure enough, it flew to the perch like it always does," he says. He snagged this shot in front of a black background, which dramatizes the bird's bright and vibrant plumage. 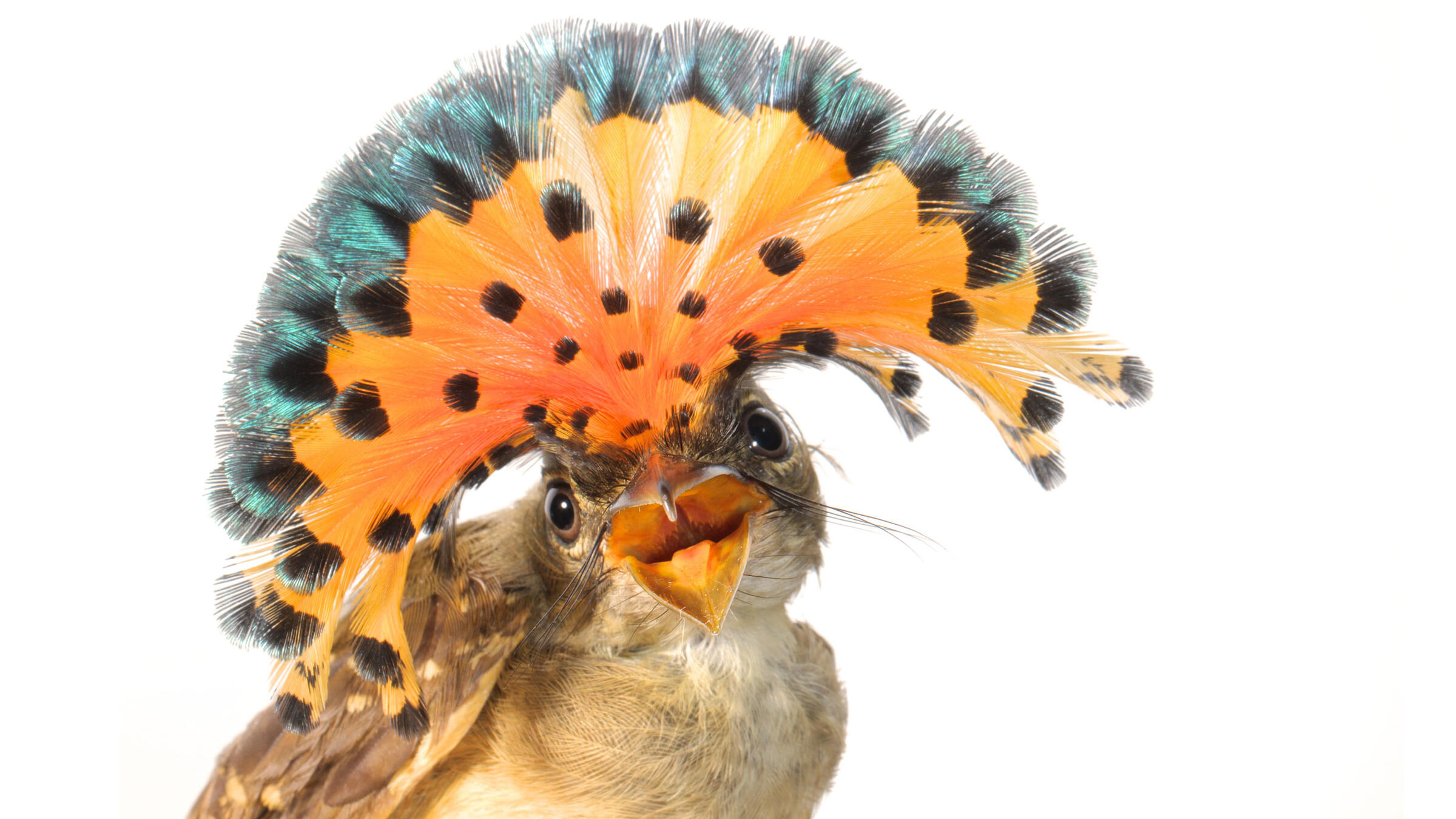 Royal Flycatchers tend to keep their explosive crests tucked away when they're not wooing mates or scrapping over territory (which is most of the time). But when they find themselves tangled in the fine mistnets used to catch birds for banding studies, they get mad. And when they get mad, they get pretty. This young male tried to scare Graesser into letting him go. It worked: After he weighed the bird and attached a lightweight metal band to his leg, he snapped a photo and let the feisty flycatcher fly. "The photo gives people a look at this amazing bird that you don’t regularly get to see with the crest up like that," he says. 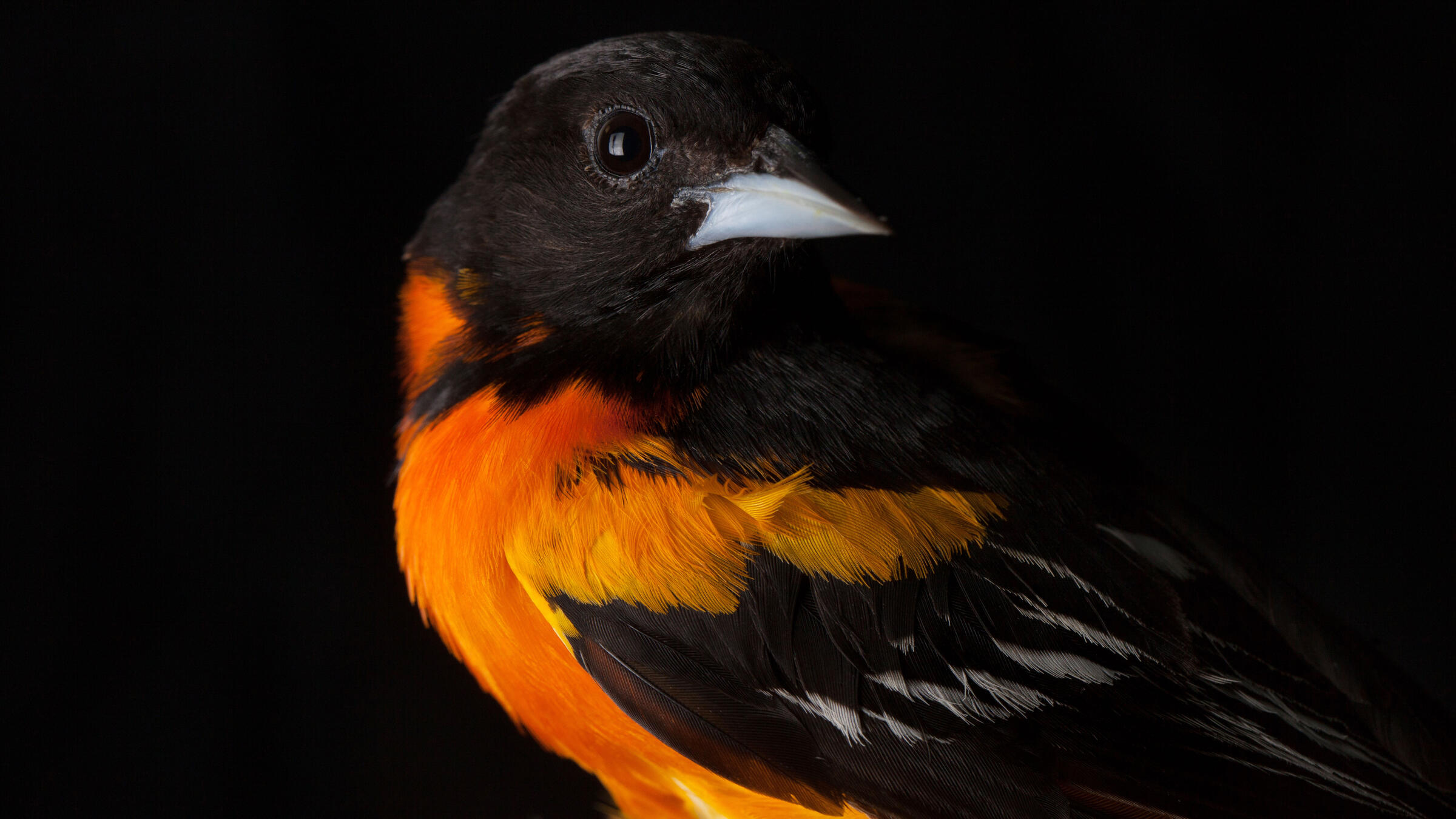 Baltimore Orioles are among the neotropical migrants that Graesser studies in both the U.S. and Central America. (This photo was taken in the U.S.) Some neotropical migrants lead double lives, engaging in different behaviors in each of their homes, but the Baltimore Oriole is more consistent. Unlike many of its migratory brethren, it doesn't often socialize in multi-species flocks in the rainforest and prefers a more solitary lifestyle. In both locales, orioles can't resist oranges. Graesser puts them out to attract the birds, although a homemade orange feeder would do the trick, too. 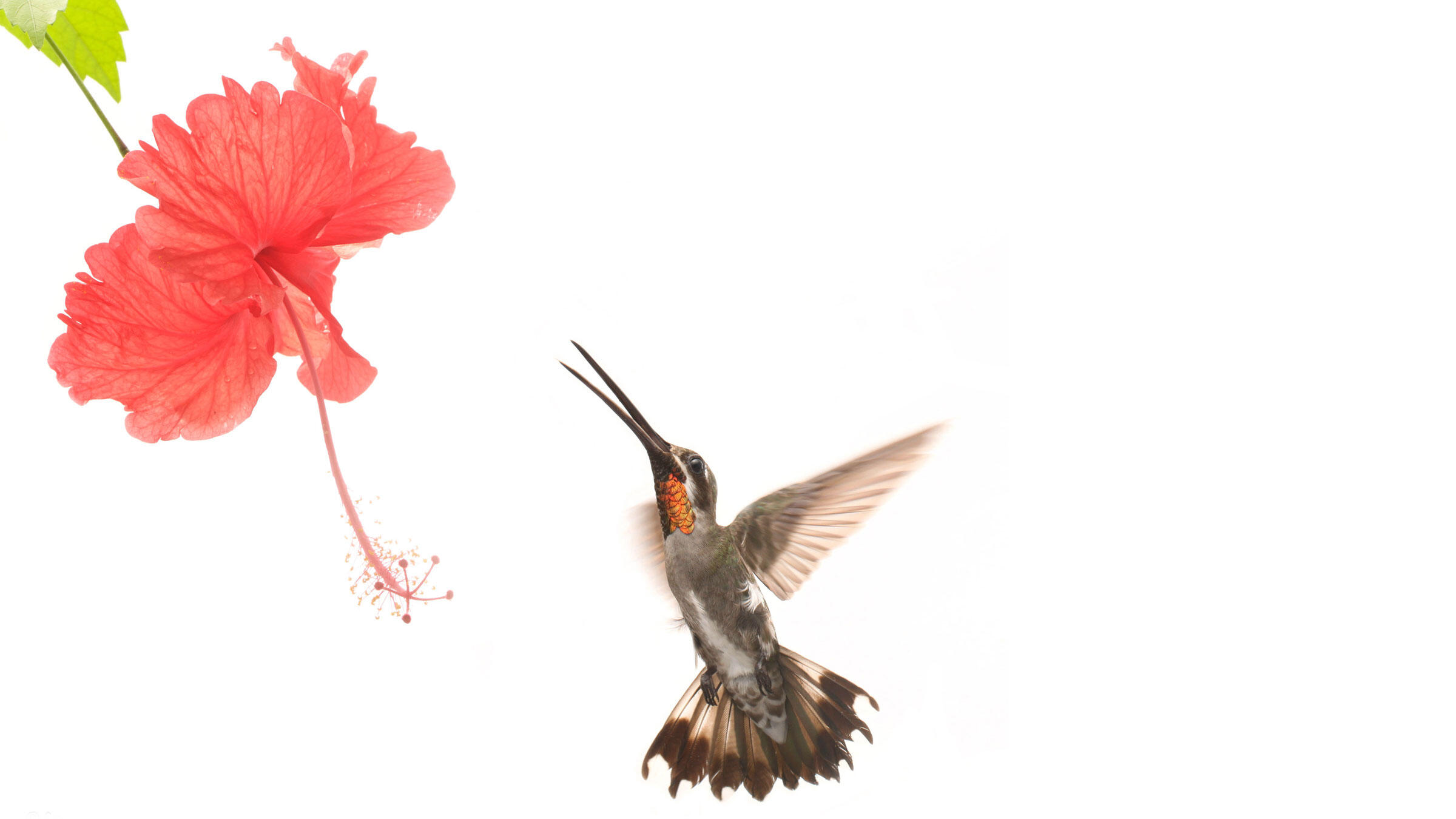 At the Nicoya Peninsula Avian Research Station in Costa Rica, Graesser (who co-founded the station) built what he calls a "hummingbird paradise"—an array of nectar feeders surrounded by flowering trees that attract hundreds of hummingbirds at once. With so many hummers at his disposal, he took his time setting up the perfect shot of this Plain-capped Starthroat approaching a flower. "I tried to draw on the Audubon-type of field sketch feel, but as a photo," Graesser says. 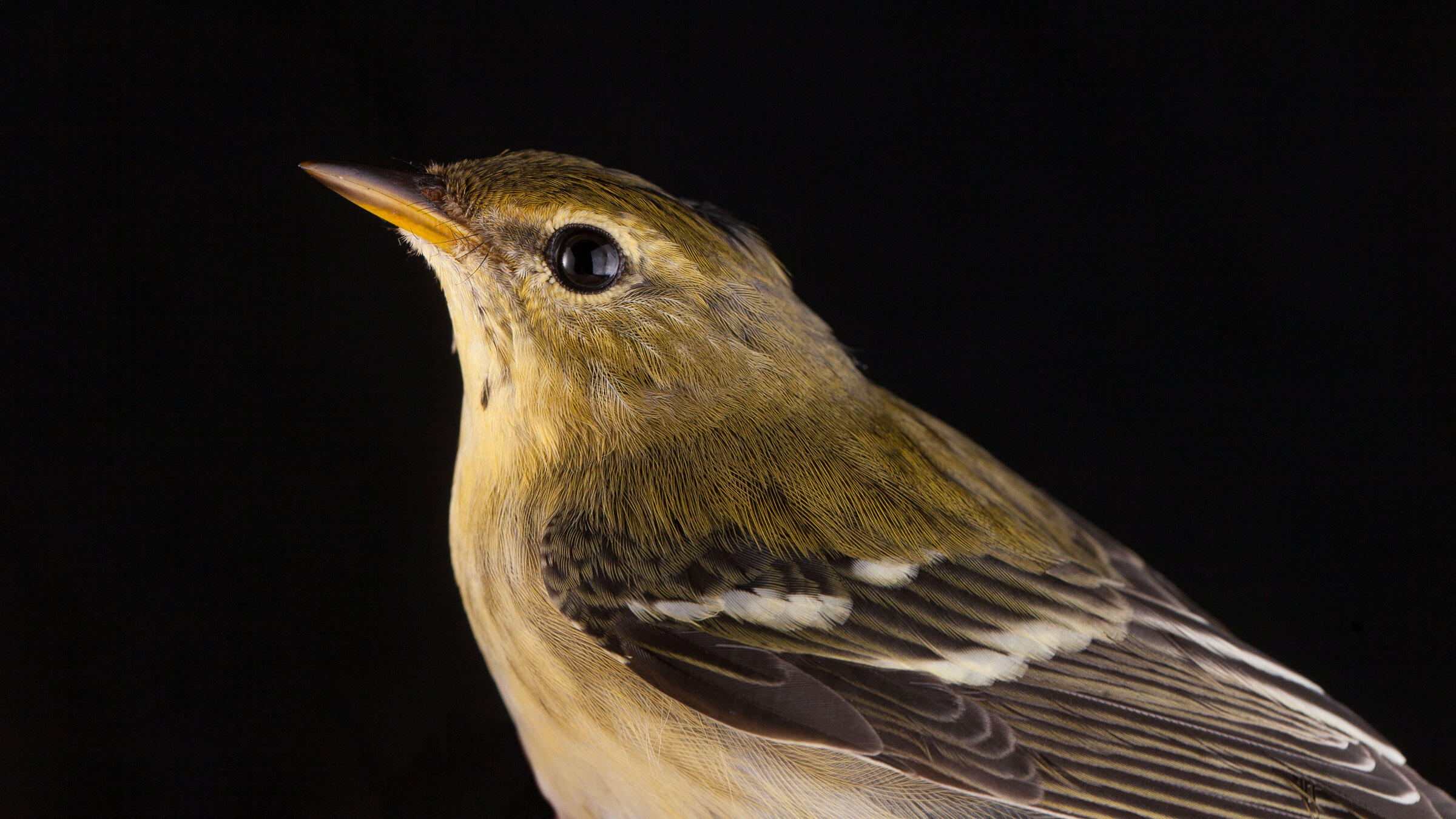 Because his photo technique so effectively brings out subtle details in color, Graesser is embarking on a new project: a photo guide to fall warblers. Warblers are notoriously difficult to identify in the fall when they molt into drab non-breeding plumage; even expert birders have to take a second look to distinguish some species. But seen through Graesser's lens, even this Blackpoll Warbler in its drab fallwear looks distinct. He hopes that by comparing his portraits of fall warblers, birders will learn to spot the differences in the field. 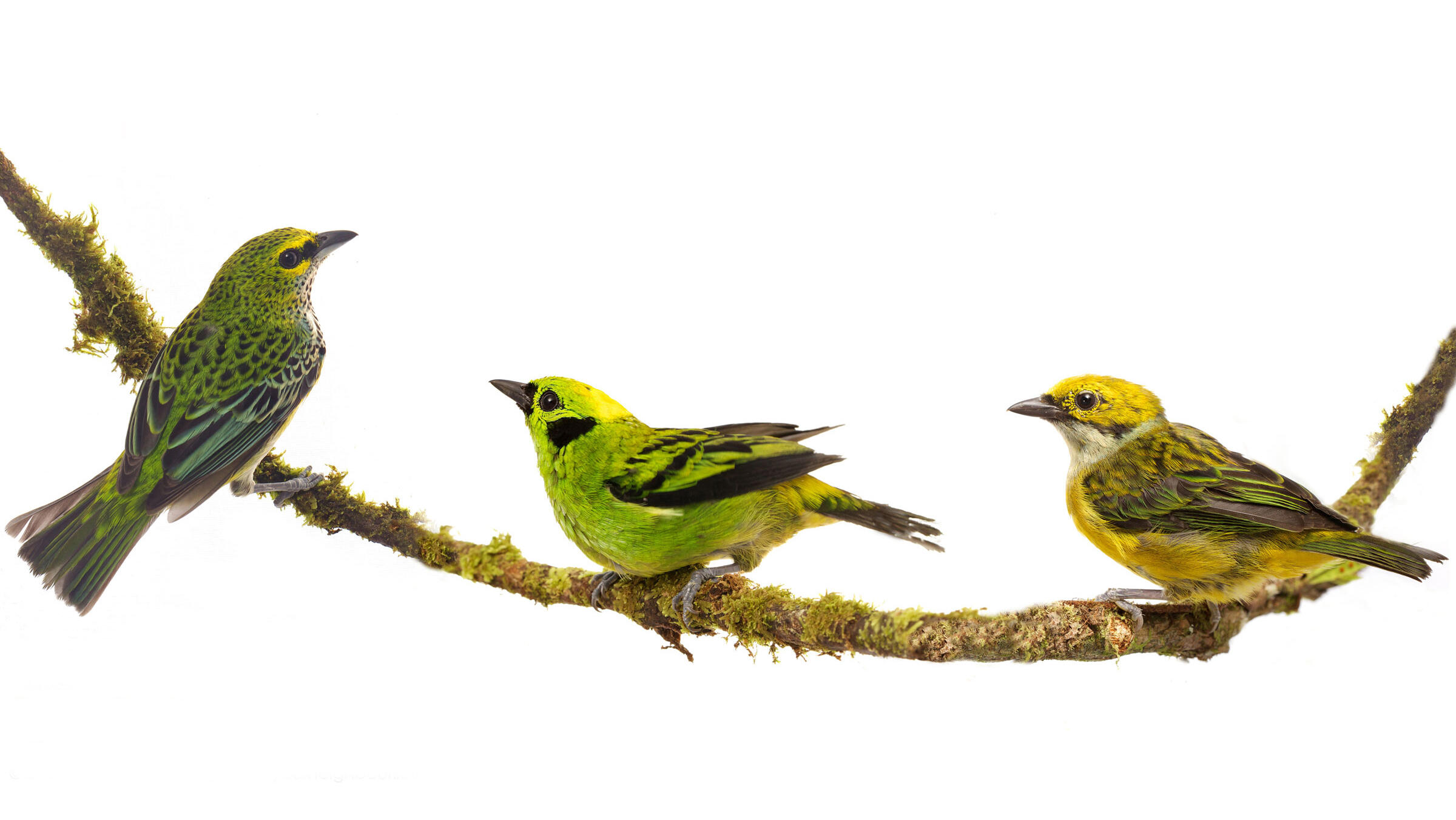 John James Audubon's drawings blended art and science. He didn't sketch living birds, but rather posed dead specimens to display as much variety in coloration and behavior as possible. Likewise, Graesser combined three separate photographs of three bird species—a Speckled Tanager, Emerald Tanager, and Silver-throated Tanager—into this single image. The arrangement makes it easier to compare and contrast the birds, and also imitates their wild behavior. Tanagers often gather in multi-species flocks to forage together in the rainforest canopy. "It would probably be a rare sighting, but they could all be on the same branch together feeding on the same fruiting tree," Graesser says. 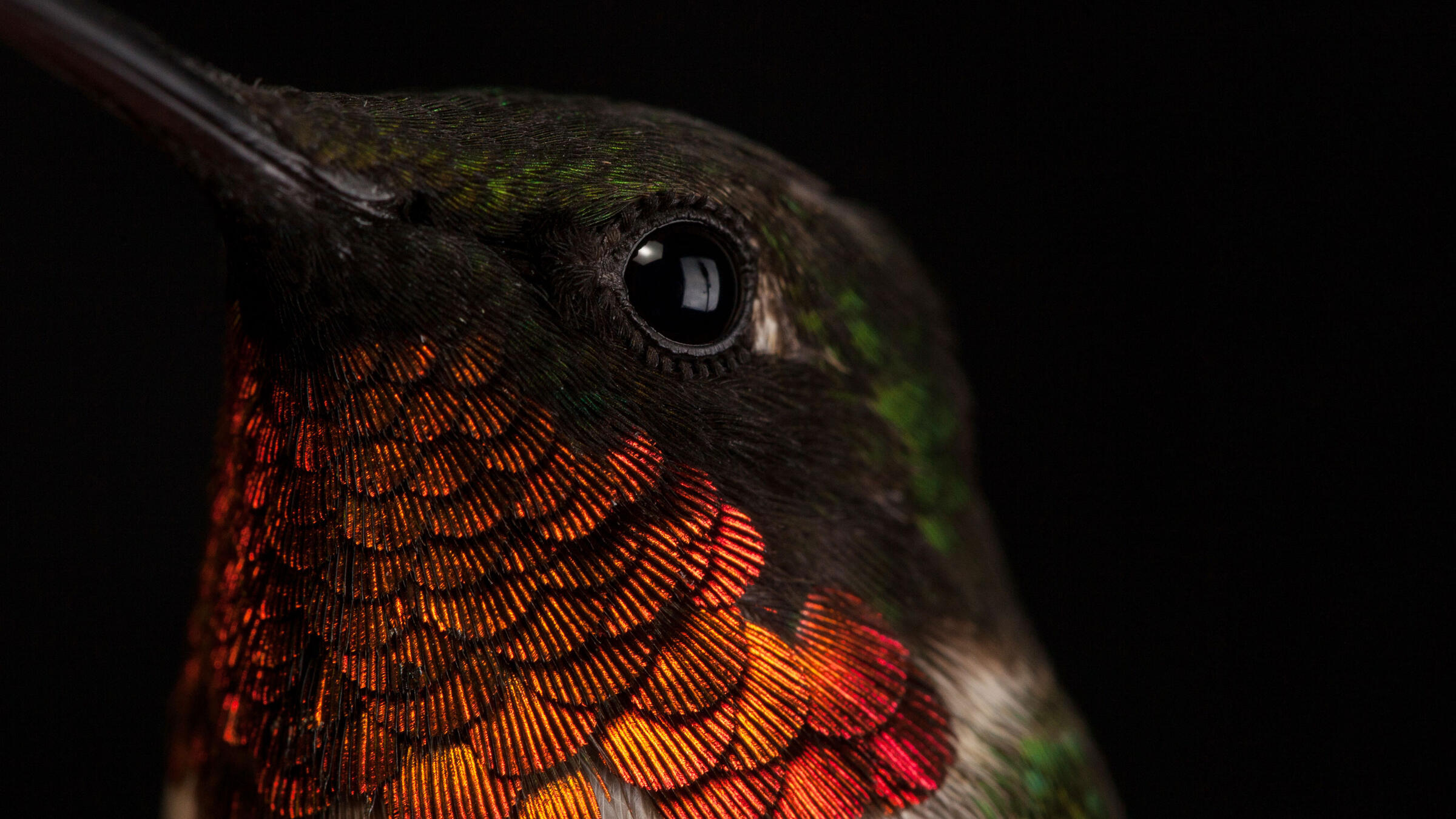 The flash of a Ruby-throated Hummingbird's iridescent throat patch (called a gorget) as it zooms by doesn't do it justice. In Graesser's photo—uncropped and taken with a macro lens—each gleaming feather looks like a tiny scale asking to be plucked. He says the biggest challenge was getting the angle and lighting correct to illuminate the feathers while also showing their structure. Graesser had several opportunities with this bird; it was recaptured in Costa Rica after being banded the previous year. "This bird that weighs less than a penny made a 10,000-mile journey back and forth since the last time I saw him," he says. 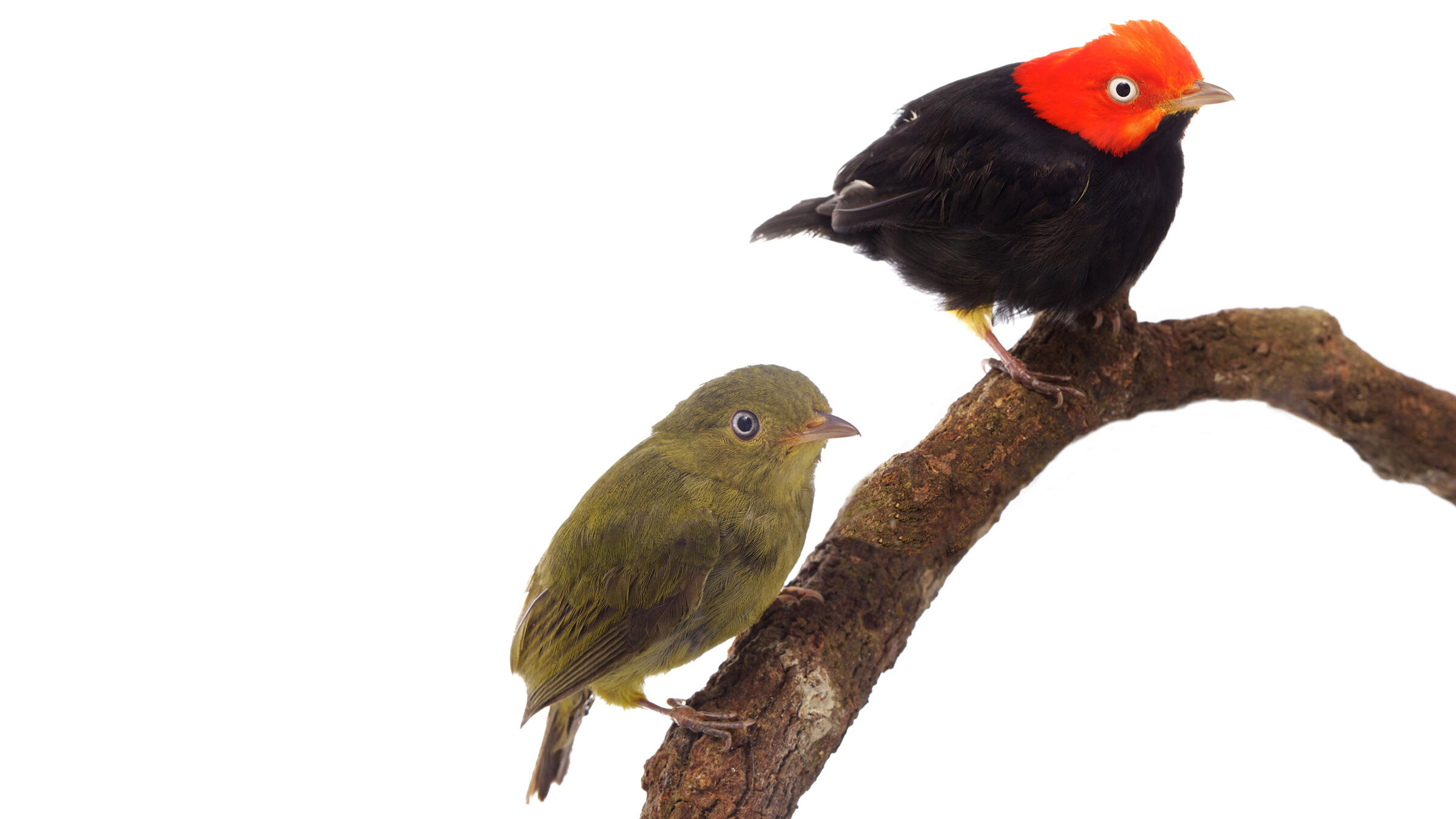 They might not know it, but Red-capped Manakins are famous on the internet. During mating season, several males come together in a communal lek and moonwalk like Michael Jackson to get the attention of females. It worked for the male pictured here; this couple frequently visited this branch, where the male would moonwalk to impress her. In the style of field guides, Graesser made this image of the male and female sitting side by side by stitching two separate photos together.