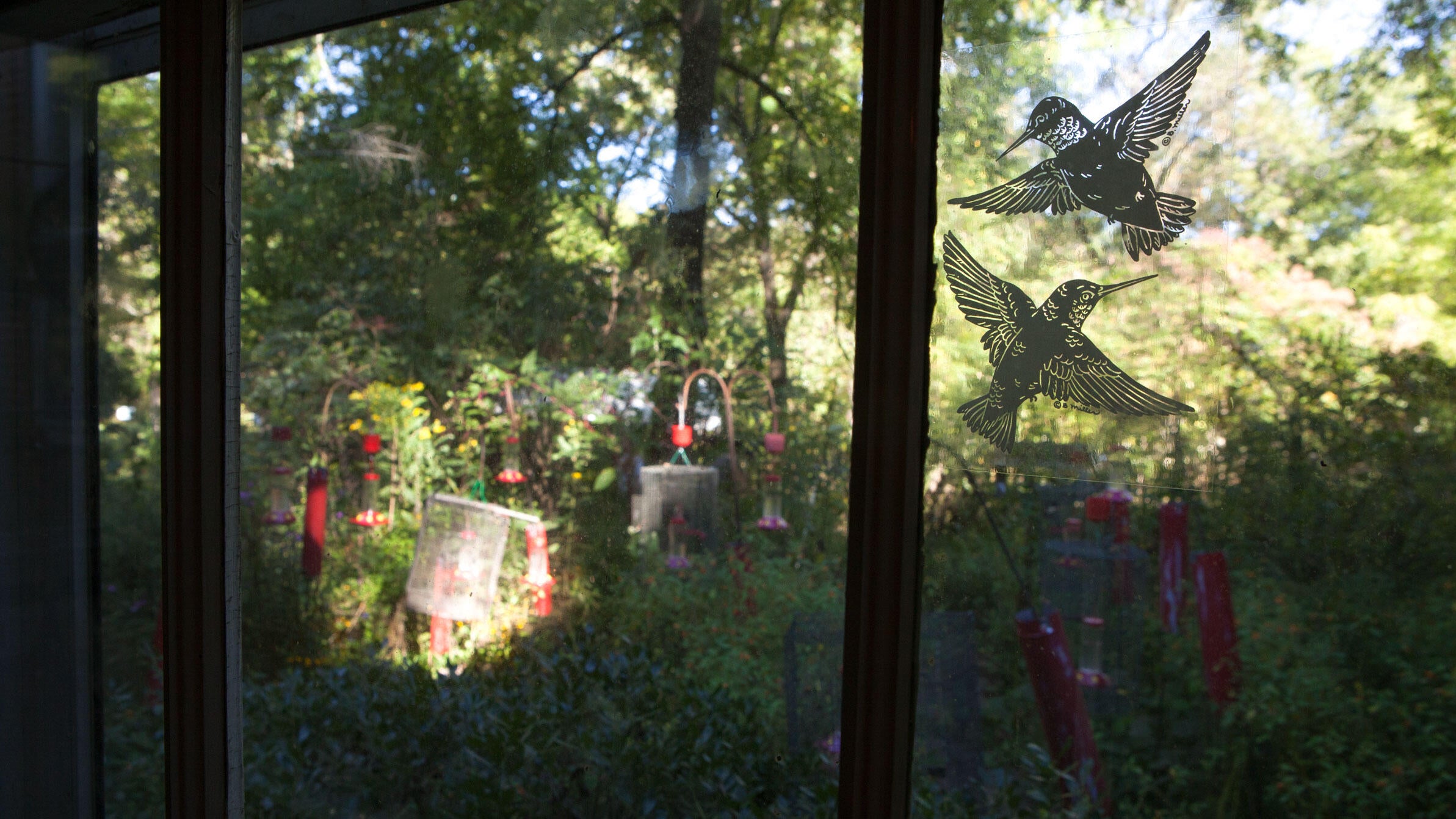 Think You Have a Bird-Friendly Backyard? Think Again.

Birdfeeders and trees help birds, but they also increase the likelihood of deadly window impacts. Here’s how to make your yard truly bird friendly.

Last spring, Justine Kummer was loafing on her couch when she heard a loud bang on the window in front of her. Startled, she ran outside to investigate the noise, and her heart sank as her fears were confirmed: A robin lay dead on the ground, killed by striking her windowpane.

Her story is far from unique; window strikes at people’s homes kill at least 150 million birds each year in the U.S. But for Kummer, the robin’s death was more personal. At the time, she was wrapping up the Birds and Windows Project, a University of Alberta citizen science endeavor studying what makes certain homes more dangerous to birds than others. That night, she dutifully filled out the online form she had designed, detailing the location and size of her house, its windows, and any bird-attracting features like feeders or birdbaths. Then she uploaded a photo of the dead robin.

“It really hurt,” Kummer says. “I thought I was going to get through the whole project without having to enter anything.”

Kummer’s robin was one of 930 collisions reported during more than 34,000 total days of monitoring by 1,300 citizen scientists. When she analyzed the data (published this month in The Condor), she found that birds tend to collide with windows in rural yards with trees and birdfeeders—the very picture of bird-friendly habitat.

“Those homeowners that want birds in their yard are probably killing most of them, unfortunately,” Kummer says. “The more birds that there are in the yard, and the more birds that are closer to a house and windows, the more likely that a collision is going to occur simply by sheer numbers.”

The findings make sense, but they're also disturbing. Hanging birdfeeders and growing native plants are among the best ways to provide food, water, and shelter to birds as they migrate across an increasingly developed continent. If homeowners want to attract and provide refuge for birds, they must also safeguard their yards against threats such as windows, toxins, and cats.

The good news is that it’s not difficult to make your windows—and yard—safer for birds. Here’s a step-by-step guide to get you started:

People take windows for granted; we don’t even think about them. When we see a framed patch of green leaves on the outside of a building, we intuitively understand that it’s an illusion—a pane of glass reflecting a nearby tree—if we notice it at all.

Birds cannot make this distinction. “If they’re flying straight towards a glass window, they won’t see it. Ever,” says Joanna Eckles, coordinator for Project Birdsafe, Audubon Minnesota’s initiative on window collisions. “What they see are the reflections of habitat or sky, things they know and need.”

Take a Bird's-Eye Tour of Your Home

Now that you know what a bird can’t see, stroll around your house and observe it from their perspective. Identify windows that reflect sky or greenery at certain times of day, or those that provide a clear view inside to what looks like nice habitat, such as houseplants or a water feature. If you find evidence of a window collision (like a dead bird or smears from feathers or blood), make that window a top priority.

The occasional collision might not seem like a big deal, but just one or two collisions per house per year can mean that hundreds of millions of birds are dying annually. “It adds up pretty quickly,” says Kummer.

Many people hang birdfeeders in a tree close to their house so they can easily watch the birds from a window. This is the worst place to put them. It draws birds close to windows while also giving them space to gain the necessary flying speed to hurt themselves.

Your options are twofold: Place feeder and birdbaths within three feet of the nearest window so that birds don’t hurt themselves upon liftoff; or place them more than 30 feet away so that feeding birds have plenty of space to clear the house.

Exterior window screens are largely out of style, but only a few decades ago, everyone had them to naturally cool their homes without letting in bugs. “With the advent of air conditioning, a lot of people don’t open their windows as much,” Eckles says. As a result, they often no longer install screens at all.

That’s a shame because exterior screens create a visible barrier for birds approaching windows, reduce reflection, and make for a softer landing in case of collision. They’re also easy to install and aren’t eyesores. What’s not to like?

If you’re remodeling or building your home, consider installing exterior screens to protect birds from your windows. If you rent or otherwise can’t install exterior screens, there are plenty of alternatives. You can hang BirdScreen, a product designed for this very purpose, or get creative with other kinds of netting.

Put Some Strings On It

Hanging strings, ribbons, or cords in front of your window is an inexpensive way to help birds avoid your windows. All you need is some medium-weight string (too heavy and birds might get tangled up) and a pair of dowels. Hang one dowel horizontally above the window; tie a piece of vertically hanging string to the dowel every four inches; and tie the ends to the other dowel to weigh the string down.

Eckles hangs string in front of windows on her own home. "The real beauty of a solution like that is you can put them up whenever you need them,” she says. According to Kummer, bird collisions tend to cluster around certain times of year, particularly during migration and when chicks are fledging. Once you identify those months with heavy bird traffic in your yard, you can hang and remove the string accordingly.

Looking for an excuse to avoid your chores? Blame the birds. Dirty windows are less reflective and can reduce collisions, Eckles says. “If you’re going to wash windows, wash them after the majority of migrants have moved through,” she says.

Use a Lot of Decals

Many forest birds readily dart between branches and leaves, so a single decal will not deter them. The barrier needs to be dense, as if it were impenetrable foliage, Eckles says. “What you’re trying to do is create enough of a pattern that a bird says: No, I’m not going to fly through there; I’m going to fly around instead.”

A single decal of a hawk stuck to a window is a common sight, but accroding to Eckles, they don't fool birds into thinking they're heading toward a real predator.  “One hawk decal in the middle plus four more could make a bigger difference,” she says.

And if you don't want to clutter up your windows, the American Bird Conservancy sells translucent tape, or you can go high-tech with decals that reflect UV light, which birds can see but people cannot.

If you hang feeders or otherwise invite birds into your yard, you need to make sure you’ve considered all threats. Lights directed upward can disorient birds when they migrate at night, so make sure any exterior lights are covered. Don’t use pesticides or other toxins on your property that could injure or kill birds. And while windows are a big problem, they come in second to cats as the biggest killers of migrating birds. “You absolutely cannot have free-roaming cats in the yard and put bird feeders up,” Eckles says.

That includes your neighbor’s cats, too.