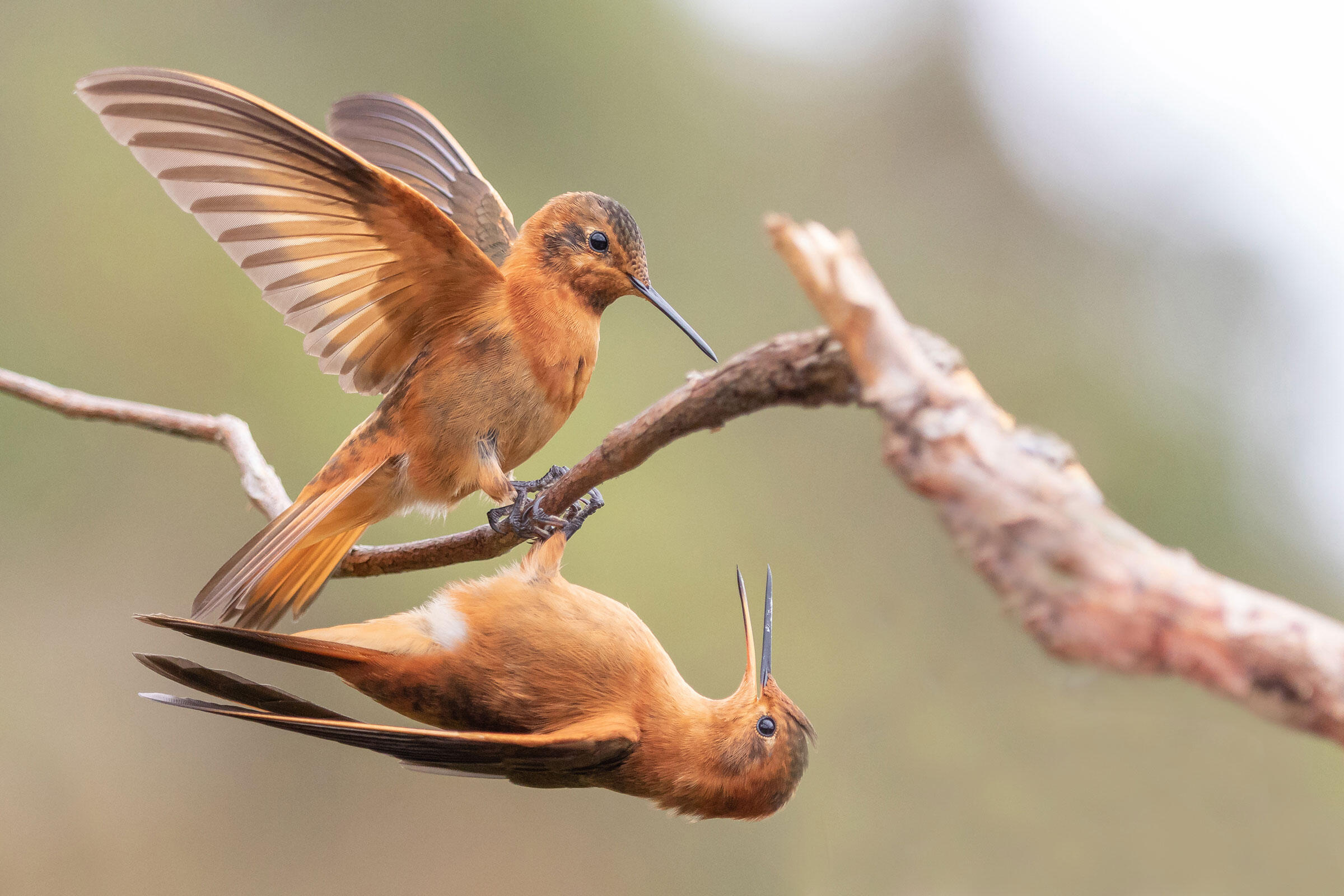 Beak against beak, two Shining Sunbeams defend their territory in the heights of the Colombian Central Cordillera. In this image, we captured the fight that preceded an attempt to drink from the same flower. With us was Harrison Vargas, a 12 year old boy, and one of the guardians of the birds we encountered during our journey. Photo: Niky Carrera Levy and Mauricio Ossa

This Duo Photographed Hundreds of Colombia’s Dazzling Birds This Year

While their images are spectacular, the people they’ve met along the way are just as big a highlight.

This is the second Colombia Big Year dispatch; read the first installment here.

Ángel Gonzalez stopped hunting birds because of his daughter. One night, the farmer arrived at his home in the mountains of eastern Colombia with an Andean Guan under his arm and his rifle slung over his shoulder. Outraged, his then six-year-old daughter called him a criminal, and asked him what the chicken-like bird had done to cause him to take its life. Shocked, Gonzalez told her that there was no meat in the house. She stubbornly replied that they would eat chicken eggs, or something else. Gonzalez took her concern to heart.  From that day on, he began to view wild birds differently—and he no longer hunted them. The shotgun barrel became a metal pipe put to use in the house. The wooden stock fed the fire that heats the farmhouse.

Gonzalez tells us that story after excitedly showing us seven endangered Mountain Grackles, the 1,347th avian species we’ve recorded on our journey to complete the first Big Year in the country. The farmer is now a birding guide in Gámbita, in the department of Santander, and one of many guardians of the birds we have encountered during more than 10 months we’ve been traveling across Colombia, tallying as many birds as we can in 2021. So far, we've recorded 1,417 species.

We’ve discovered first-hand the richness of our country, which boasts the greatest avian diversity on the planet. We’ve covered 10,439 miles of roads, we have descended from high, misty peaks to vast plains that extend as far as the eye can see, spotting dozens of bird species through the window of our truck. We have crossed 248 miles of rivers in boats, reaching remote sacred sites in the Colombian Amazon, inaccessible by other means. Thirteen flights have ensured we reach 28 departments the country, and we have trekked 733 miles, marveling at crystalline waters rushing over pink riverbeds; at small hummingbirds atop a mountain facing each other like medieval warriors, wielding their beaks as weapons; at the brilliant blue eyes or bright yellow plumage we caught site of as we have ventured through forests.

Some 1,800 cups of coffee and countless glasses of cold panela water with lemon have enlivened passionate conversations about conservation with Afro-Colombians, Indigenous people, villagers, children, and community forest rangers. We have laid down our heads on 220 pillows, many of them provided by the families who welcomed us into their homes and slept in hammocks during our visit.

With less than two months to go through four remaining departments, we know that we will experience many more tearful goodbyes with families who, like Gonzalez, not only opened the doors of their homes to us, but also have also shown us what they’re dedicated to protecting.