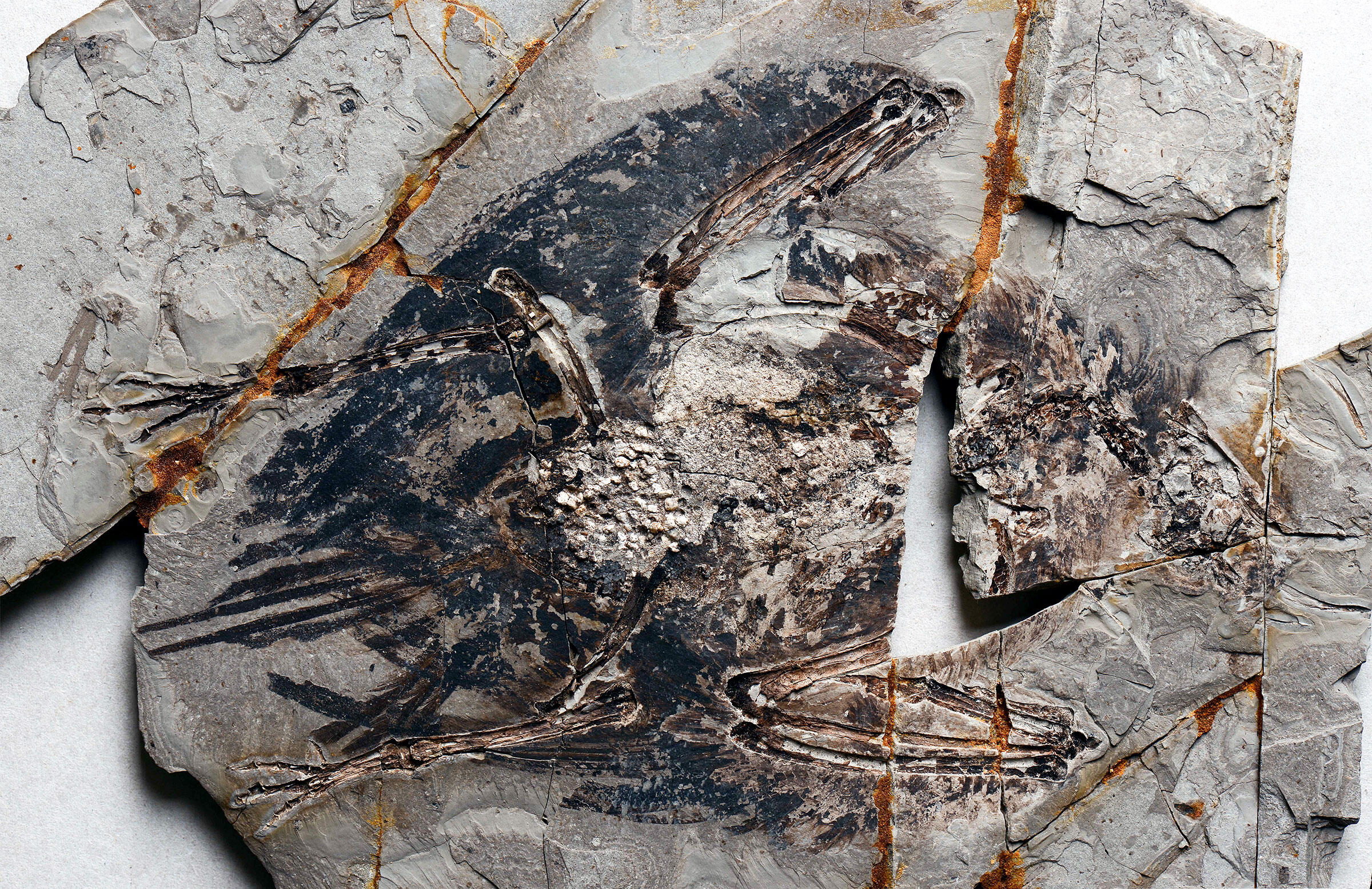 The research team was originally attracted to this Archaeorhynchus spathula fossil because of its well-preserved plumage, but further study revealed what appear to be the remnants of lungs. Photo: J. Zhang/Institute of Vertebrate Paleontology and Paleoanthropology

This Fossil Is Probably the First to Preserve Ancient Bird Lungs

If so, the similarity of the 120-million-year-old organs to those in modern birds sheds new light on avian evolution.

Fossils, in the popular imagination, preserve hard matter: bones, trackways in the rock, or perhaps even the occasional impressions of feathers in an exceptional skeleton. But when the remnants of soft tissues can be detected, they can unlock a realm of information missing if you only have a skeleton.

Take the late Cretaceous bird Archaeorhynchus spathula, previously known from four specimens with well-preserved bones: useful, but not about to set the world on fire. According to a paper newly published in PNAS, though, the fifth one is the kicker: Not only does it preserve extensive plumage, it appears to show a set of preserved lungs. If confirmed, they would be the first such set from a fossil archosaur—the family that includes crocodiles, dinosaurs, and birds—and suggest that the modern style of bird respiration evolved much earlier than suspected.

Birds have the most complex (and most efficient) respiratory system of any living vertebrate, which they need in order to handle the incredibly difficult task of flying. While mammal lungs pump oxygen in and carbon dioxide out, birds developed a different system. Their lungs don’t expand and contract: Instead, they use a network of air sacs that act like bellows, pulling oxygen through the lungs in such a way that they’re able to make use of it on both inhalation and exhalation.

“Not only can they meet the oxygen demands of flying,” says Jingmei O’Connor, a vertebrate paleontologist and co-author on the paper, “they can fly over the fricken’ Himalayas. Modern birds are ludicrously over-engineered.”

Archeorynchus was a relatively primitive member of the Ornithuromorpha, the group that includes all modern birds. It would have been about the size and shape of a pigeon, O’Connor says, with a toothless beak. It lived about 120 million years ago in the forests of China, a subtropical and seasonally chilly environment. The volcanically active region was prey to massive ash falls or occasional burps of poisonous gas that killed fish or dropped dead birds into the lakes.

These rapid burials often preserved soft tissues like plumage, which were what initially attracted O’Connor and her colleagues’ attention. The specimen—which O’Connor described as looking like roadkill—spans two slabs, and shows a pin-tail arrangement common in modern birds but previously unknown in fossil ones. (Picture a short, aerodynamic fan with two additional elongated feathers, like that of a racket-tailed hummingbird or a motmot.)

But the team also noted the presence of what looked like soft tissue remains: a pair of white-specked organs in the chest, visible to the naked eye. Stomach contents tend to preserve as a carbonized black smear; livers, with their high iron content, look reddish. These looked a lot like lungs. While writing the paper, O’Connor says, she mentioned these organs in passing; the point of the paper was to describe the animal’s plumage. But after six rounds of review the paper got rejected, she says. The stated reason? Not enough proof that the preserved soft tissues were actually lungs.

So the team got back to work.

The tissues looked basically identical to that of living bird, says O'Conner, a co-author on the paper.

Using electron microscopes, the they pored over 12 samples from the suspected lungs, comparing the tissues to 10 samples from elsewhere in the skeleton. The preserved features showed a miniscule honeycomb of tissue. When O’Connor contacted John Maina, a specialist in modern-bird respiration, he replied that the fossil appeared to show the subdivided region of tissue responsible for gas exchanges in bird lungs. The tissues looked basically identical to that of living birds, O’Connor says.

Archeorhynchus wouldn’t be the first fossil species to have preserved lungs: a Cretaceous mammal from Spain and a salamander from the Tertiary period have also been recorded with lungs. "I think that considering what we have, we've put together a really good argument,” O’Connor says. “Nothing is overwhelming evidence, but we're coming at it from several different lines: anatomical, topology, macroscopic and microscopic structure, and also, the fact is that lungs have preserved before in other animals."

Luis Chiappe, a specialist in early birds at the L.A. Museum of Natural History, agrees that O'Connor's argument is strong. “I think she’s made a very compelling case that those structures are part of the lungs of this animal,” he says. (O’Connor is one of Chaiappe's grad students.) While he hadn’t seen the paper prior to the team’s presentation last week at the Society of Vertebrate Paleontology meeting in Albuquerque, he says the preservation on the possible lung tissue looks spectacular. But, he cautions, there’s more research to be done.  Speaking to ScienceDaily, Corwin Sullivan, a paleontologist at the University of Alberta in Edmonton, Canada, also sounded a note of caution about whether it’s possible for relatively delicate lung tissues to be preserved in partial three dimensions.

If these are indeed lungs, however, their presence suggests that the pulmonary specializations that help birds take in oxygen were present as early as 128 million years ago, when the skeletal traces of respiration looked primitive. Since paleontologists usually only have skeletons to work off of, O’Connor says, it’s easy to assume that the soft tissue goes in step with the skeleton. But the lungs add to the growing evidence that skeletal adaptations actually lag behind soft tissue ones, and that the traits key to modern birds' success (digestion and breathing, for example) might have appeared quite a bit earlier than previously suspected.

“This is something that we need to be aware of when we're interpreting all these skeletons: Whatever we're estimating is a worst-case scenario," O'Connor says. "They most likely had greater abilities."