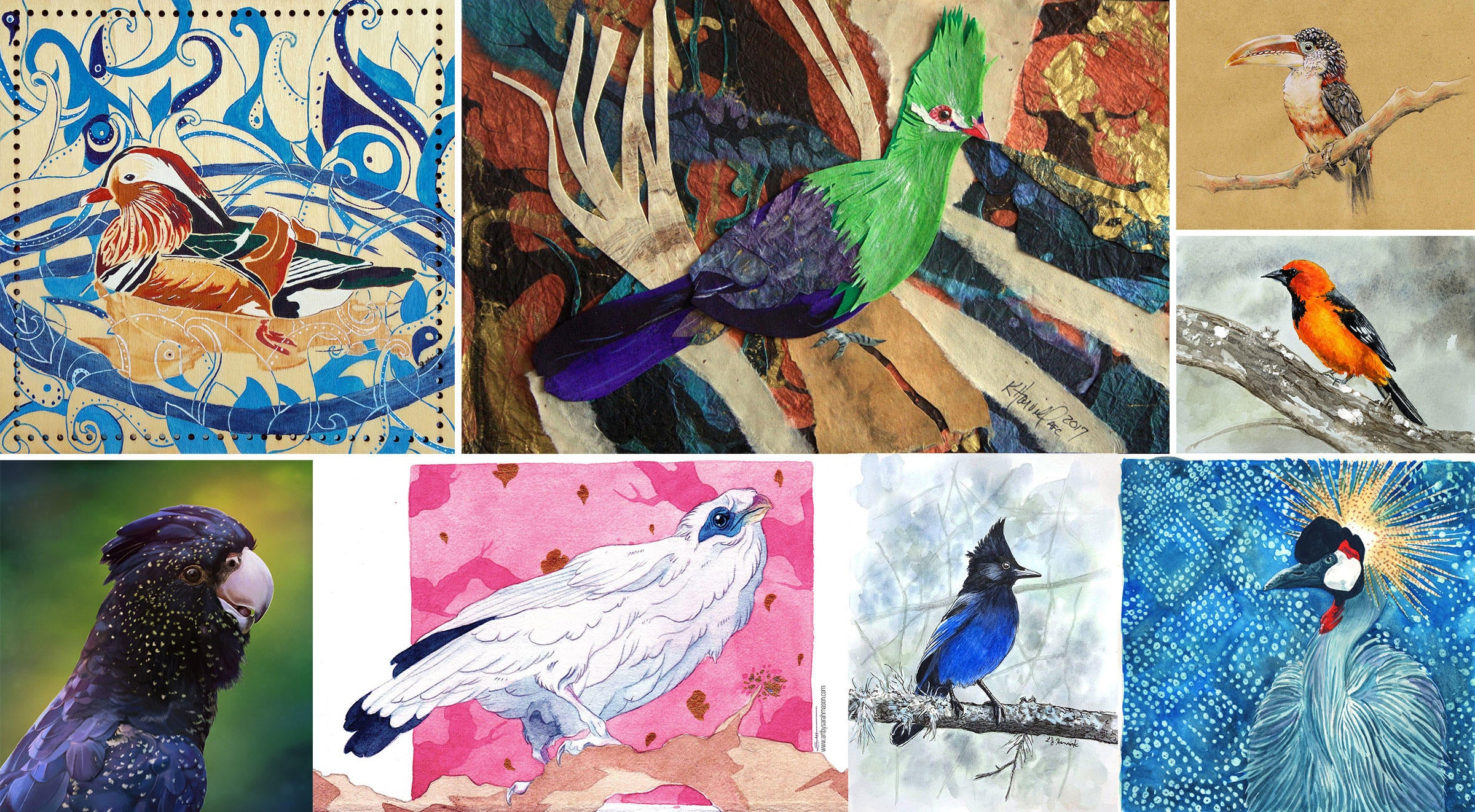 This Online Art Community Celebrates Birds, and the Results Are Wonderful

The BirdWhisperer Project fosters creativity while bringing artists together from all over the world—no matter their skill level.

During the month of March, artists across the world spent much of their time studying the same photo of a flamboyant Appenzeller Spitzhauben. Many of them initially knew nothing about this Swiss chicken, a hardy bird with mottled plumage, but that didn’t matter. For all of the artists, the goal was the same: To create an original work based on the image and then submit it to the BirdWhisperer Project.

Since 2016, the creators of the BirdWhisperer Project have selected a new avian species each month and posted a reference photo on the project’s Facebook page. The subjects have been diverse, ranging from famous individuals, like the “hot” Mandarin Duck (January 2019), to common backyard birds, such as the Northern Cardinal (January 2020). Once a new subject is selected, artists have a few weeks to create their works. At the end of the month, all submissions are featured in a photo album on the BirdWhisperer Facebook page.

A fortuitous meeting led Amanda Makepeace and Melissa Gay, both fantasy and sci-fi illustrators, to create the project. The two began chatting at JordanCon, an annual fantasy and science-fiction convention in Atlanta, in April 2015, and bonded over their common interests. They kept in touch through Facebook, and the following January, completely by coincidence, Makepeace posted a sketch of a raven just days before Gay shared her own ink drawing of a raven. And thus began a tradition: Using a reference photo of a bird, the two began creating their own artistic interpretations and sharing them on their profiles. Today, what started as a fun way for the friends to share their art has grown into an effort that spans the globe.

In the four years since launching,  the project has shared the works of about 80 different artists from roughly 10 different countries, and as of March 2020, the Facebook page, where viewers can peruse past months’ artworks, now has about 1,200 followers. The participants have diverse styles and backgrounds, from individuals across the U.S., U.K., and Germany, to an entire family in India. They also have varying levels of experience: Some are professionals, while others are just tapping into their artistic side. “It's about spreading a love of birds and a love of art making to people who maybe didn't think that they could draw, maybe people who didn't think they had any kind of talent, but they do,” Makepeace says. “We don't judge anybody. We love all of it.”

Karen Samuhel, of Conway, Arkansas, had always aspired to be an artist, and finally made the leap to painting full time after 25 years teaching in elementary school classrooms. It’s a move she describes as a “dream come true.” Samuhel mostly paints natural subjects like animals, landscapes, and portraits using watercolors and acrylics. She’s found birds in particular to be simultaneously challenging to portray and useful for honing her skills at rendering minute details: the different sizes of beaks, or the varying colors and textures of plumage. So when Samuhel heard about the BirdWhisperer Project from a colleague, she became intrigued to glimpse how other artists tackle these tricky subjects.

“You have the opportunity to see so many different ways to paint the same subject and at so many different levels, and it does spark your imagination to have a new idea for another time,” says Samuhel, whose first contribution to the BirdWhisperer Project was a Northern Bald Ibis in October 2017. “I have definitely learned from the others, and I've also learned that maybe I can take a few more risks with my painting.”

Even artists who have sustained professional careers in the field find value in the joint effort. Mariya Prytula is a children’s book illustrator who was born in Odessa, Ukraine, and now resides in Austin, Texas. She incorporates the vivid colors used by post-Soviet artists in her layered watercolor paintings of the natural world. Though Prytula has developed her own distinct style, she enjoys experimenting with the BirdWhisperer’s reference photos and is always eager to see other participants’ work.

“It gives me freedom and camaraderie, and I think that's important because we're all interested to take a peek into another artist’s mind,” Prytula says. She's gone beyond simply looking at what other artists create, and has started hosting bi-weekly Zoom Hangouts with other female artists to combat depression during the COVID-19 pandemic. When they get together, Prytula says, "the first question is: 'Can I look into your sketchbook?'"

Koral García Delgado, also known as Harkayla, is a fantasy artist who lives on a coffee farm in La Azulita, Venezuela. He learned about the BirdWhisperer Project from an artist friend, and has made eight illustrations so far. “As a bird lover and environmental activist, the project helps me to find hope between the chaos and the mess that the human footprint has done to our planet,” Delgado says. “It is a chance to bring some awareness about our feathered friends, spreading their beauty as a source of inspiration.”

The COVID-19 pandemic has, for the time being, scuttled Makepeace’s hope of expanding the BirdWhisperer Project into schools and libraries near her residence just outside of Athens, Georgia. She wants to share with children the delight of making art through painting or drawing birds. For now, though, she’s proud of the project’s reach, and glad to see so many people taking part. If anything, the project is the perfect outlet for so many people who now find themselves sheltering at home and looking to stay busy.

If you would like to participate in next month’s BirdWhisperer Project, all you need to do is grab your pens, pencils, paint brushes—or whatever your preferred medium calls for—and visit the 2020 tab on the BirdWhisperer website. There you can find the reference photos for all of the birds that have been and will be featured in 2020. Next month’s bird is the American Goldfinch, but, if you want, you can paint a past month’s bird. Makepeace will still post it at the end of April; it’ll just be shared in that species’ respective photo album.

After all these months, Makepeace still smiles when opening emails bearing the beautiful bird portraits she helped inspire artists to make. “It's nice that people are taking the time each month to focus on this,” she says. “Whatever they have going on in their life, they're making time for this as well, and that's a wonderful feeling. With all the things going on in the world, especially right now, it's nice that there's something like this that I think brings them joy.”

Several new murals have gone up in Hamilton Heights—check them out and see some videos of their creation here.