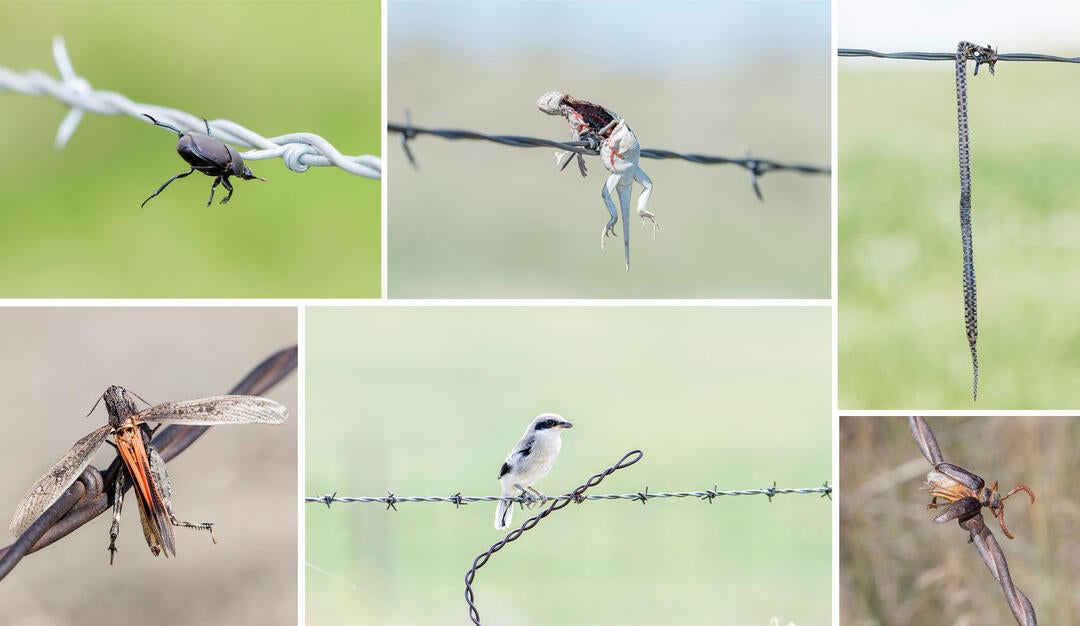 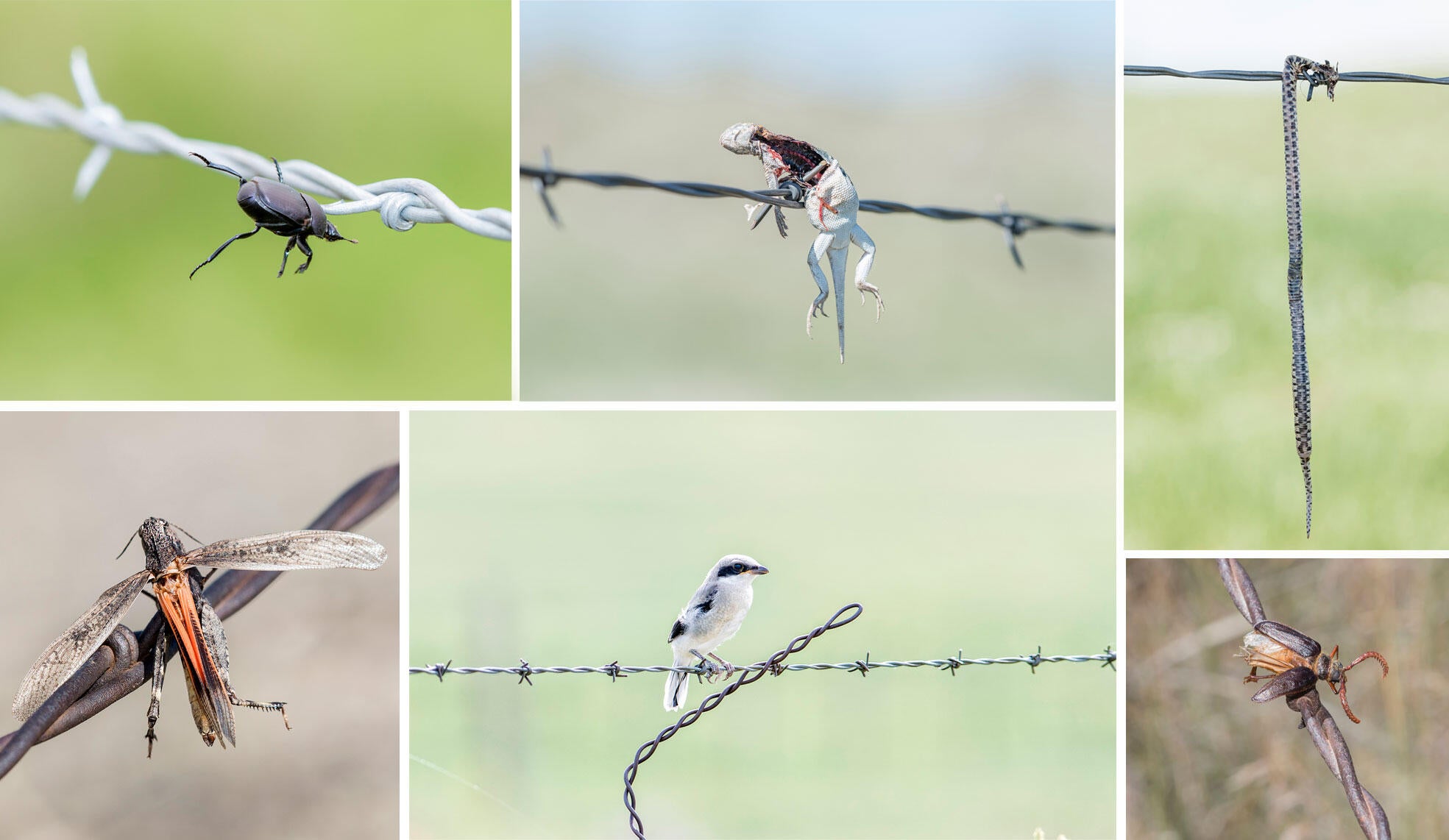 Rachel Hopper was driving through Colorado’s Pawnee National Grassland in 2016 when she spotted an insect impeccably impaled on a barbed-wire fence. She recognized it as a Haldeman’s grasshopper, a species she’d seen flitting across the region’s shortgrass steppe, but never dead, and certainly not like this. A professional photographer based in Fort Collins, Hopper suited up in snake-proof chaps, grabbed her Nikon D810 and tripod, and got to work.

Hopper has been an avid birder since the early 1990s, but that discovery marked her initiation to what she's come to call “shriking,” a niche form of birding devoted to observing shrikes—in her case, Loggerheads—and their impaled prey. “I was blown away,” she says. “This had been a part of nature that was right in front of me all along and I hadn’t seen it.”

Found only in North America, the Loggerhead Shrike hunts from tall shrubs and fence posts in open country. This nine-inch carnivore kills prey ranging from bees to birds to snakes, using its tiny hooked beak like a scissor to snap the vertebrae of heavy prey. Like the continent’s other shrike species, the Northern Shrike, Loggerheads often stick their prey on thorns or barbed-wire fences and return to snack on them later. This behavior has even earned them a telling nickname: butcherbirds. Unfortunately, both species have suffered steep declines due to habitat loss and pesticide use, with the Loggerhead losing 80 percent of its population since the 1960s.

Ever since that day, Hopper has returned to the grassland at least once a week each summer when Loggerheads breed, often with David Leatherman, a retired entomologist who has been her guide into the world of shriking. To avoid disturbing the birds, Hopper and Leatherman approach the caches only after a shrike leaves the area to hunt down more prey, and take pains to avoid going near nests.

“I was obsessed,” Hopper says. Using her 200mm macro lens, she has dilligently documented prey cached by this unusual songbird with a raptor-like personality. Her collection of these photos, aptly named Death on the Plains, features skewered beetles and grasshoppers, skinks and other lizards, as well as rodents and snakes.

“One of the objectives was to document the variety of impaled prey and see if there were patterns,” Hopper says. “But I also wanted to make these photographs as aesthetic as possible, presenting them in a way that is beautiful and brutal.”

Among the more macabre pierced prey they’ve documented were a decapitated western rattlesnake and the head of a Grasshopper Sparrow. “The sparrow head looked quite fresh and almost alive,” Leatherman says. “It surprised me.”

These larger prey items could be examples of shrikes using the barbed wire not as a larder, but as a fork and knife, says Amy Chabot, coordinator of the Loggerhead Shrike Working Group that was founded in 2013 to coordinate research and conservation efforts across the bird’s range. “Shrikes don’t have a problem killing the item, but they have a problem ripping apart the food or carrying it with their songbird feet,” she says. The sharp fence wire “is a way to secure your food to take manageable bites.”

On other occasions, Hopper has witnessed impaled prey that still show signs of movement.

On other occasions, Hopper has witnessed impaled prey that still show signs of movement. Some grasshoppers, for example, are toxic, so shrikes leave them impaled alive for a day or two so the toxins degrade. “It’s hard to watch that sometimes,” she says, “but it’s all part of nature and what shrikes do.”

Not everything the shrikes skewer gets eaten. Early in the breeding season, which kicks off in April, Hopper and Leatherman photographed a suite of impaled prey that remained affixed on fence barbs and unconsumed for weeks—a display designed to seduce females and mark the male’s territory, says Chabot. That changes later in the season, as nesting progresses and a male stocks a pantry close to his nest to feed his growing family.

Chabot says she’s impressed by the variety of impaled items Hopper has photographed, noting that she and other researchers have struggled to consistently find shrike pellets that could reveal the breadth of the bird’s diet across its range. “If photographers visited the same sites, time and again, and documented what prey were there, that would be really helpful,” she says. (She cautions, however, against disturbing the breeding birds or removing the impaled objects to photograph them.)

Such long-term projects could also help scientists recognize changes in prey populations over the years, giving them a stronger foundation for future shrike conservation. For example, Leatherman noticed that red-shanked grasshoppers—typically one of the most common impaled prey—were “basically absent” in the summer of 2017. “That year, the shrikes impaled a lot of reptiles,” he says.

As the birds return to the Pawnee National Grassland, Hopper is excited about another season of shriking. “We find something different almost every single year,” she says. Who knows what grisly, glorious discoveries await.

What Do Baseball Players and Shrikes Have In Common?

Research shows that this predator's mask might serve the same purpose as the eye black athletes wear.

Shrikes Have an Absolutely Brutal Way of Killing Large Prey

Famous for impaling their victims, these songbirds first use a special maneuver to break the necks of small rodents.