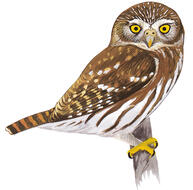 Among the mesquite thickets and cacti in parts of southern Arizona, it was once relatively common to hear the high-pitched, muffled whistle of a tiny but fierce predator. Where woodpeckers made cavities in giant desert saguaros, monogamous pairs of Cactus Ferruginous Pygmy-Owls often moved in to nest. They preyed on birds twice their size and darted from perches to pluck lizards off the ground for their hungry offspring.

Today, however, the diminutive raptors are running out of habitat. The federal government once considered the owls, which also live in Texas and Mexico, endangered in Arizona. But that protected status was later scrapped in a 2006 court victory for developers. Environmental groups challenged the decision and have continued fighting in court for the bird’s protection. In the meantime, however, new houses, roads, and an imposing wall along the nation’s southern border have carved up the bird’s home ground. Estimates now put the Arizona population at only around 100 owls.

“The Cactus Ferruginous Pygmy-Owl is a symbol of the Sonoran Desert, its fierceness,” says Noah Greenwald, endangered species director at the Center for Biological Diversity. “If we lose that part of the desert, we’ve lost a little part of what makes the area special.”

Now, the bird has a new shot at protection. Prompted by a lawsuit from Greenwald’s group and Defenders of Wildlife, the U.S. Fish and Wildlife Service (FWS) in December proposed to again give the owl protection under the Endangered Species Act, this time with a threatened listing throughout its range. The agency accepted public comments earlier this year and is expected to make its final decision by year’s end.

The reddish-brown-and-white subspecies of the Ferruginous Pygmy-Owl once had a broader range in Arizona that extended from the desert scrub of the borderlands to the cottonwood groves of the Salt River Valley in the Phoenix area. But urbanization, livestock grazing, and other human activities have fragmented its habitat. Meanwhile, fast-spreading wildfires, fueled by invasive buffelgrass, destroy the mesquite trees and columnar cacti the owl needs to thrive. “The broad-scale distribution has probably declined by more than half in Arizona in the last 100 years or so,” says Aaron Flesch, a research scientist at the University of Arizona’s School of Natural Resources and the Environment.

The subspecies also faces threats elsewhere in its domain. Agricultural development and urban sprawl consume its habitat along the border in Texas and the neighboring Mexican state of Chihuahua. Farther south, deforestation in Mexico’s tropical forests wipes out trees where the birds also nest. Given these widespread pressures, the FWS deemed that the risks were serious enough to merit protection under the act across the owl’s range. Although such a listing would only directly protect pygmy-owls north of the border, it could lead to strengthened binational cooperation on conservation of the bird, says Scott Richardson, a supervisory biologist with the agency.

The owl’s future in the borderlands could become still more precarious as its northern habitat grows even hotter and more arid, Richardson says. “Climate change, particularly in the Sonoran Desert, has the potential to affect the distribution of saguaros and even whether saguaros will remain where they are today,” he says.

On top of extreme weather, the tall border wall that slices through the owl’s habitat also poses a threat to its existence, according to the FWS. “Of particular concern is the potential for border infrastructure to reduce habitat connectivity into occupied pygmy-owl habitat in Mexico,” the agency wrote in its proposal to re-list the bird.

The Trump administration spent $15 billion to build roughly 450 miles of new and replacement wall along the nearly 2,000-mile border, which deeply scarred some ecologically fragile land. President Biden halted construction when he took office and has called on Congress to cancel funding for the wall. But that hasn’t yet happened, so the administration is using those funds for “activities necessary to address urgent life, safety, environmental, or other remediation required to protect border communities,” according to the Department of Homeland Security. That includes some new construction, such as closing gaps in wall segments, though the White House maintains it is only cleaning up the previous administration’s mess.

The re-listing proposal comes after years of litigation and political tensions surrounding the owl.

The wall and adjacent access roads may isolate Mexico’s pygmy-owl populations from those in Arizona and Texas, the FWS and conservation groups say. Previously, lower barriers in protected public lands blocked vehicles while allowing the passage of wildlife. But the Trump administration replaced them with steel bollards up to 30 feet high, blocking many animals from crossing the border.

While the barrier may not be much of an obstacle for many winged creatures, pygmy-owls like to stay close to the ground, cloaked in vegetation to avoid predators. Flesch says the birds generally won’t fly over trees. “Their flight behavior is such that you wouldn't expect these owls to be flying up over the border wall.”

The re-listing proposal comes after years of litigation and political tensions surrounding the owl. A population decline first prompted the FWS to list it as endangered in 1997. That year, a survey in the bird’s historical range in Arizona detected just a dozen sightings. The listing was a blow to developers, since it made it more challenging to build in habitat designated critical for the owl’s recovery. The National Association of Home Builders sued, arguing that, given its low numbers, Arizona’s owl population did not contribute significantly to the survival of the subspecies.

The builders make a similar argument against the new proposed listing. “If you look at the science, it’s pretty hard to make a credible argument that the entire pygmy-owl species is faced with a risk of extinction, given the size of its range and the number of owls in Mexico,” says Norman James, an attorney who represents the organization. He calls “particularly disturbing” the reversal of a 2011 FWS decision that the owl did not qualify for listing under the ESA because, while it was in serious trouble in the Sonoran Desert, it was secure elsewhere. But that decision was based on an incorrect interpretation of the law, a federal judge ruled in 2017. Then, in 2019, environmentalists secured a court-enforceable deadline for the FWS to reach a new listing decision.

The resulting proposal to label the bird threatened—which indicates that it is not in danger of extinction now but could become so before long—has drawn plenty of pushback, including from wildlife managers. The Arizona Game and Fish Department wrote that it opposes the re-listing, going so far as to argue that “the best available science shows the perceived threats to the owl do not exist.” Kenneth Jacobson, raptor management coordinator for that agency, says concerns involve the possible impact to existing conservation actions, including nest monitoring and a breeding and reintroduction program launched more than a decade ago in southern Arizona.

With opposition to the proposed listing coming from multiple directions, the final threatened listing is not a done deal. But to the Center for Biological Diversity’s Greenwald and other conservationists who have long fought for the pygmy-owl, renewed protection is the obvious choice. “It shouldn’t take 16 years to get a species that was already recognized as being imperiled protected again,” he says.