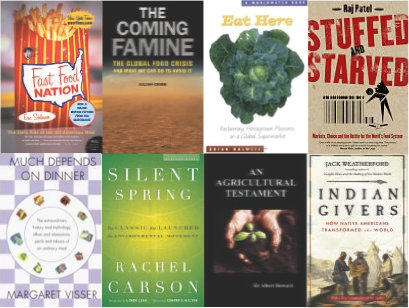 New books about sustainable food are coming out all the time, making selecting one or two to read a potentially overwhelming process. So we turned to the experts for suggestions. Michael Pollan, Anna Lappé, Dan Barber, and other influential activists and authors share their favorite books. Check out our special March-April Food Issue for more on sustainable cuisine, from farm (or sea) to table.

Dan Barber, Executive chef and co-owner of Blue Hill restaurant
Recommends: Much Depends on Dinner: The Extraordinary History and Mythology, Allure and Obsessions, Perils and Taboos of an Ordinary Meal, by Margaret Visser

Margaret Visser’s Much Depends on Dinner isn’t a cookbook (at least not in the traditional sense); it’s an anatomy of the American dinner table. Visser looks at ingredients from every angle—historical, philosophical, and gastronomical—providing not just a context, but a culture, for our food. Required reading for anyone who eats.

Halweil was way ahead of the curve in writing this book, which predates the many books on eating locally that soon followed. His book does not index the word "sustainability," but sustainability is what it is about. His argument is simple: eating locally is better for health, farmers, and the planet. The book provides plenty of evidence to support that statement. The book is distinguished by clear writing and an extensive review of data demonstrating the waste and harm of the present industrialized food system. Halweil presents many examples—international as well as domestic—of alternative farming methods, along with ideas for policies and personal actions to achieve a more sustainable food system.

Michael Pollan, journalist and author of seven books, including Food Rules: An Eater’s Guide
Recommends: Stuffed and Starved: The Hidden Battle for the World Food System, by Raj Patel

Stuffed and Starved is a terrific book that looks at the food question as a global rather than national issue, brilliantly connecting the dots between overweight in the West and hunger elsewhere.

Anna Lappé, author, Diet for a Hot Planet: The Climate Crisis at the End of Your Fork and What You Can Do About It
Recommends: Silent Spring, by Rachel Carlson

First published in 1962, Carson’s book is still one of the most persuasive calls to rethink our relationship to chemicals. So powerful, in fact, that the chemical industry launched a smear campaign against her and the book, including a Monsanto-published parody called "The Desolate Year" that detailed the famines that would be unleashed if Carson’s message was heeded. Whether you read the book years ago or will be reading it for the first time, Carson’s visionary writing, reverence for nature, and poetic passion is buoying in this dark time.

Frederick Kirschenmann, Distinguished Fellow, Leopold Center for Sustainable Agriculture, Iowa State University; and president, Stone Barns Center for Food and Agriculture
Recommends: The Coming Famine: The Global Food Crisis and What we Can do to Avoid It, by Julian Cribb

Anyone serious about "sustaining" a viable food system for the 21st century and beyond is aware of many challenges that we will be facing in the decades ahead—the end of cheap energy, more unstable climates, depleting fresh water resources, depleting soils, etc. But few of us have probably contemplated the cacophony of related events that will impact our current food system before mid-century. No one to my knowledge has provided such a comprehensive analysis of the many challenges we will face and why we need to begin planning for them now. In addition to his cogent analysis of the difficulties we will face he also provides some sound advice so we can begin preparing to avoid what could become an unprecedented crisis. I doubt that Cribb has all the answers, but all of us interested in a sustainable food system should read this book and become part of the conversation to determine how we can best redesign the global food system to meet the challenges ahead.

Fast Food Nation is very insightful on the damage not just to people’s individual health, but health of the planet as well. I have visited some of the feedlots, like those Schlosser highlights, in Colorado and Kansas and found them quite disturbing.

Vandana Shiva, environmental activist and author of nearly two dozen books, including Soil Not Oil: Environmental Justice in an Age of Climate Crisis
Recommends: An Agricultural Testament, by Albert Howard

In my view this is the most significant book ever written on agriculture. Albert Howard was sent by the British to India to improve Indian agriculture with chemicals. As he says, he found the soils fertile and no pests in the field. So he decided to put away his spray guns, and make the pests and the peasants his ‘professors’ to understand how good farming is done. The result is the agriculture testament. It is considered the bible of organic agriculture, and inspired the soil association in the U.K. It is a bridge between east and west and shows no matter where you are, farming in nature’s ways is the only sustainable foundation for food security.

My recommendation is not a single book, but a genre of books and a way of thinking about the world. More than anywhere else, I have found inspiration for my work in books that highlight Native American views on the way we live (or could live), and the contributions made by native cultures to some of the most basic aspects of our lives, including especially the food we eat. To that end, I would urge folks to read anything by Vine Deloria (God Is Red, For This Land) or Jack Weatherford (Native Roots, Indian Givers), in order to gain an understanding, not based in sentimentality, for the way the Earth can and should be treasured as not just a home, but a sacred dwelling place. In this view, food is a natural extension and symbol of the way we care for our home and maintain respect for each other. By dishonoring the land, we also diminish the food we depend upon and thereby destroy our relationship to all that really matters.

Eating Animals, by Jonathan Safran Foer
Filled with facts, figures, and descriptions full of grotesque details about how factory farmers go about the business of slaughtering chickens, turkeys, pigs, and cows, Jonathan Safran Foer’s Eating Animals makes a convincing case for becoming vegetarians. “I love sushi, I love fried chicken, I love a good steak. But there is a limit to my love,” he writes. “Since I encountered the realities of factory farming, refusing to eat conventional meat has not been a hard decision. And it’s become hard to imagine who, besides those who profit from it, would defend factory farming.” The story is personal: Foer details his educated decisions about what to feed his newborn son. The story is also personal for the farmers and activists, like the vegetarian rancher or vegan slaughterhouse builder, who explain for themselves their role in the meat industry. After devouring the story, a mix of memoir and investigation, expect to question your taste for meat.—Susan Cosier

The Blueberry Years: A Memoir of Farm and Family, by Jim Minick
When twenty-something schoolteachers Jim and Sarah Minick decide to start an organic, pick-your-own-blueberries farm in rural Virginia, their new neighbor, Joe, scoffs. “You want to farm like my grandmother!” says the man who tended juicy, pesticide-laden strawberries for four decades. “There ain’t no way you can grow a garden without a sprayer. Looks to me you either spray or pray!” But Minick persists and eventually—through a bumblebee fiasco, a tree he cut falling onto his house, a month-long mulch experiment, and many, many scars—his initial 1,000 blueberry bushes thrive. For more than 10 years (some better than others), these plants provide hundreds of pickers local, all-natural deliciousness to harvest while silently teaching: “Eating is a political and environmental act,” Minick writes. “Each bite affects our health as well as that of all creatures, from the soil microorganisms to the farmer.” The Minicks eventually sell this farm, yet they never stop believing in blueberries or in the organic way of life. On their new farm, they plant 50 new bushes, relishing the sweet taste of each round, blue fruit.—Michele Wilson