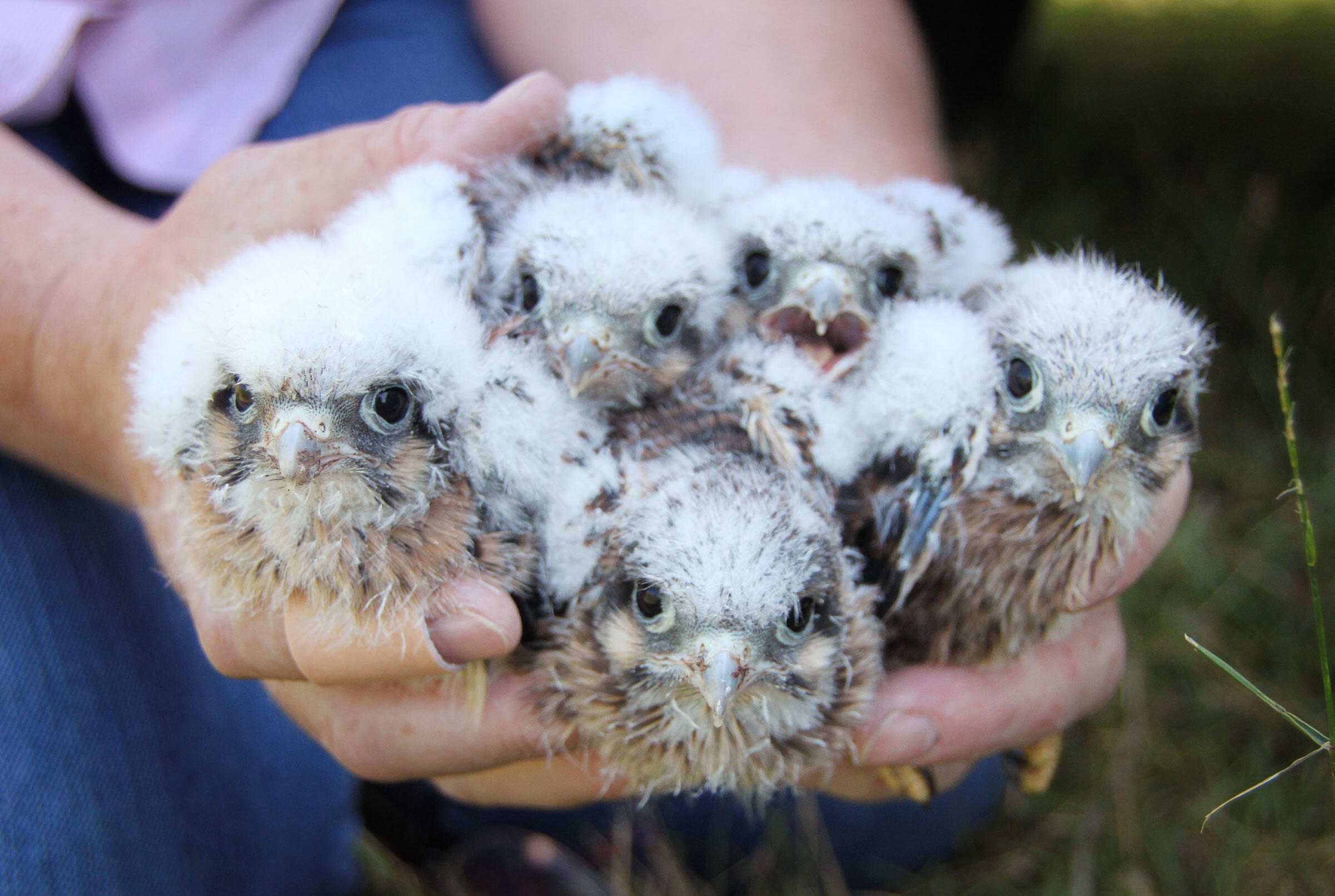 Tracking Kestrels One Feather at a Time

Researchers suspect that plucked DNA can provide answers to where climate-threatened American Kestrels are going.

For Janet Eschenbauch, her daughter-in-law Amber, and their close crew of volunteers, the month of July is so much more than backyard barbecues and beachside frolicking. July means waking up at dawn, piling into a beat-up green Subaru, and rumbling 50 miles into the Wisconsin grasslands. It means spending days peeking into wooden boxes for signs of American Kestrels, banding the birds, and collecting data about North America’s smallest falcons, which have been on an inexplicable decline for the past 50 years.

Eschenbauch, who leads Central Wisconsin Kestrel Research, says that in typical years, at least 40 percent of the kestrels they encountered were returners, recognizable by the tiny bands she secured around their legs. “Those were the birds that were going all the way down to Missouri and Mississippi [to winter], and they were coming [back] either to the exact same box or a box half a mile away,” she recalls. “I mean, you could count them. They came back years and years and years.”

Recently, however, she has noticed a new pattern emerging. During years with erratic weather, a phenomenon slated to grow in frequency with climate change, she recorded plummets—in one case, from 56 percent in 2012 to 23 percent in 2013—in the numbers of returning kestrels among the nest boxes.

While what is driving this change remains a mystery, Dr. Julie Heath, an ornithologist and associate professor at Boise State University, points to one possibility: climate change. “We have a lot of evidence that kestrels are changing their migration patterns,” says Heath, who studies how climate change is impacting migratory bird ecology, the movement of migratory birds.

However, there is no way to know unless monitors can track the birds during their seasonal journeys, a feat that is traditionally done through bird banding. But for a project of this large scale, Heath rules out bird banding. “When you band birds, very few birds are recaptured or recovered to collect information about from movements,” she says, citing the USGS Bird Banding Lab, which recorded a dismal 1.66 percent of banded American Kestrels were recaptured or recovered between 1960 and 2016 in the United States.

Instead, to find out where the birds go, Heath and other scientists are hoping to extract the answer by analyzing bird DNA with a technique that scientists at UCLA have dubbed genoscaping. The theory goes that migrating bird populations will return to breed in the same geographic region and will end up sharing similar pieces within their genetic codes. Scientists use these genetic variations to identify bird sub-populations based on their geographic origins, by creating a map, or genoscape. The DNA samples come from feathers collected by volunteers and, unlike in banding, there is no need to recapture or recover the same birds. “That means that every bird that’s captured becomes a piece of information, versus only very few,” says Heath.

In a 2014 study led by Dr. Kristen Ruegg, an evolutionary biologist at UCLA, researchers succeeded in genoscaping another migratory bird, the Wilson’s Warbler. Heath approached Ruegg, who co-leads the Bird Genoscape Project, and suggested this method be applied to study the declining American Kestrels. Today, under the Bird Genoscape Project, the American Kestrel Genoscape project is a budding effort supported in collaboration by the Peregrine Fund’s American Kestrel Partnership, Hawk Life International as well as researchers at Boise State University and UCLA. The American Kestrels are just one of several bird species being examined in this growing genoscape intiative, which received seed funding in 2015 to study six species.

At this moment, the American Kestrel Genoscape project is in its early stages, with 2016 being the first year that researchers are conducting broad sampling across North America. “We’re just starting to figure out what does the [genetic map] look like for American Kestrels,” says Heath, who says they are trying to answer preliminary questions like, “Where do we want to look on their DNA to find [genetic markers]? And what sort of diversity do we find across North America with different breeding populations?”

Along with Eschenbauch, Heath estimates about 30 groups ranging from Canada to Idaho, including a few Audubon chapters, are contributing kestrel data for genoscaping. This summer in Wisconsin, Eschenbauch plucked feathers from 36 kestrel clutches living in boxes managed by Central Wisconsin Kestrel Research as well as Madison Audubon Society (MAS), which runs the largest kestrel nest box monitoring program in the state. Brand Smith, the MAS nest box program coordinator, describes how Eschenbauch led volunteers in such a well-organized manner that the anticipated two-day affair required less than one.

Most likely, the feathers collected this summer will not be analyzed until next year. Heath says they are busy reviewing the preliminary samples from last season and hopes the panel will be finished within a year. “We have to first make the tool,” she explains. Then maybe, with help from scientists and citizen scientists around North America, “we can understand annual cycles and bird movements and start to think about conservation across the year.”