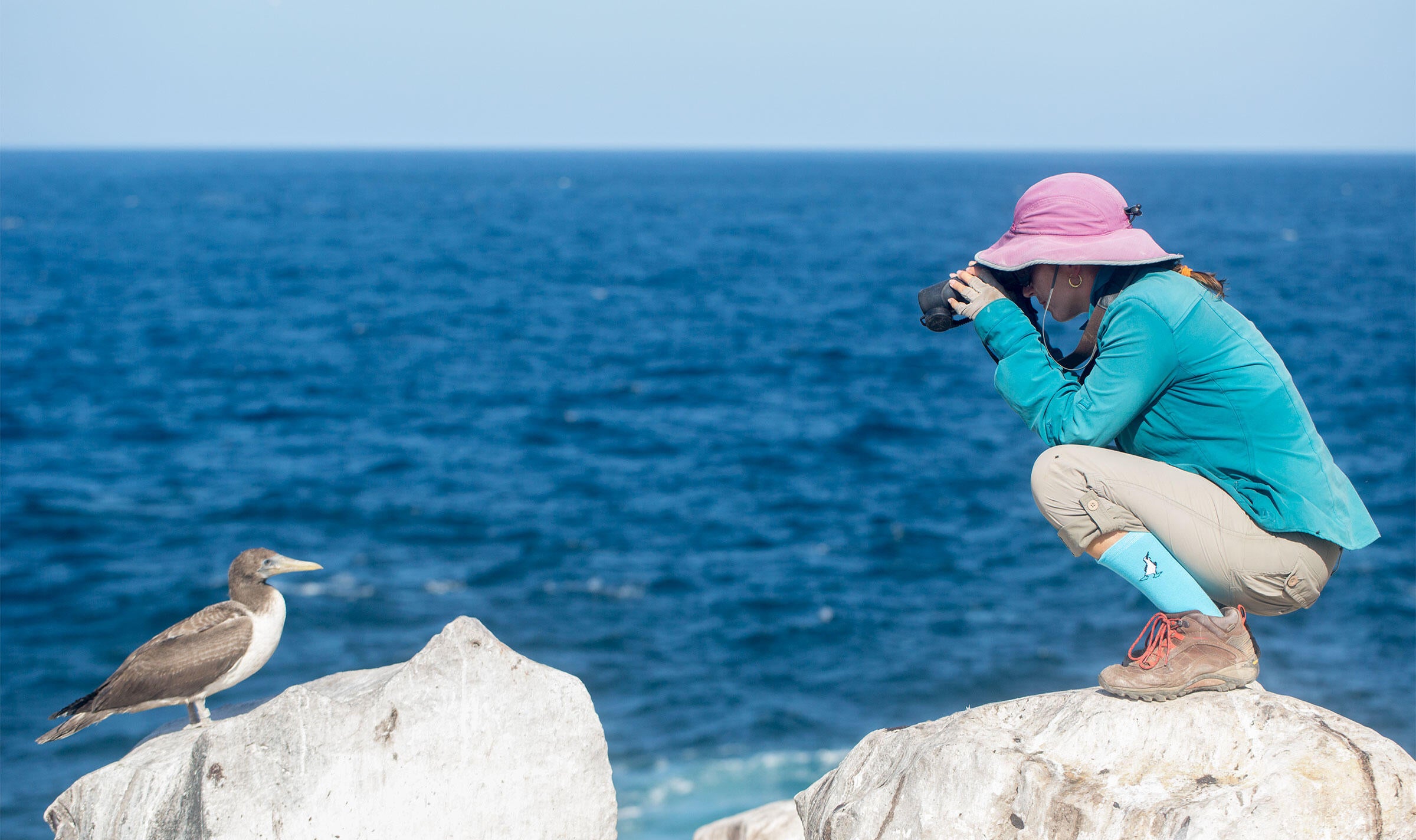 Jenny Howard, a graduate student at Wake Forest University, studies a juvenile Nazca Booby while wearing a pair of the Blue Feet Foundation's socks on Punta Cevallos in the Galapagos. Sock sales benefit Blue-footed Booby research on the islands. The species once bred in the hundreds at Punta Cevallos, but has vanished since the 1990s. Photo: Eva Gruber

Worried about a declining population of Blue-footed Boobies in the Galapagos, the boys decided to raise money and awareness—by selling socks that match the birds' famous feet.

Will Gladstone has a pretty hefty life list for a 13 year old. He’s spotted 190 species since he began keeping track about two years ago, after he heard three Pileated Woodpeckers squawking above him in the trees during a family vacation to Florida. Now, every weekend he asks his dad to take him to a new spot near their home in Massachusetts to study local birds. But he still hasn’t seen the one that’s taken up the most time and energy in his life: the Blue-footed Booby.

Last April Will and his younger brother Matthew started the Blue Feet Foundation, which sells bright-blue socks embroidered with a likeness of the booby to raise money and awareness for the species. Overall, the wide-eyed birds, which inhabit a coastal stretch from northern Mexico to southern Peru, are doing just fine. But a small, fairly isolated population on the Galapagos Islands has slumped in recent decades. All told, between the 1960s and 2012, the Galapagos population shrank by about two-thirds. “Nobody thinks they’re going extinct,” says David Anderson, a biologist at Wake Forest University who led the 2012 survey. But it’s not good news either. “For a long-lived bird like a booby, that’s a pretty amazing decline,” he says.

When Will learned of the boobies’ plight in science class, he decided to step up and help. The rising seventh grader, who says he wants to be a nature photographer or conservationist when he grows up, has a soft spot for the quirkiness of the species. “They’re sort of just a strange and unique bird, and they just have something special to them,” he says. “One day it sort of just hit me that because they have blue feet you could sell blue socks.” That, Will realized, was how he'd make money to save the booby.

To get the idea rolling, the brothers first held an online contest to pick the sock design. Once they had their top contenders, they consulted their friends for a second opinion. “A lot of people at school, they cheer me on," Will says. "They’re really supportive of me."

The next step was to take the shop live. With a little guidance from his parents, Will set up the website and stocked it with adult and kid sizes. Then, he waited . . . and waited for the orders to come in. It took about three months for the first pair to sell. But once word started spreading, the socks were snapped up quickly.

In the past year, the brothers have sold more than 2,000 pairs of custom-designed socks, shipping them to 18 countries and 47 states. All the proceeds (each pair costs $12.50) go to the Galapagos Conservancy, a nonprofit dedicated to protecting the islands’ wildlife. “We get a lot of emails from kids, most of them looking for help with their research project,” says Lori Ulrich, who leads the group’s membership department. But this email stood out to her because Will already had his venture up and running. She remembers thinking, “This kid’s got his act together, and he’s doing things by the book.” She gave Will permission to use the organization’s logo and waited to hear more about the project.

Now, the Gladstones are affectionately known as “The Sock Boys” at the conservancy’s headquarters. All told, the brothers have sent in $17,000—almost half the cost of a new project to send Anderson and his colleagues on a thorough, three-day survey of Blue-footed Boobies on the Galapagos coast last month. 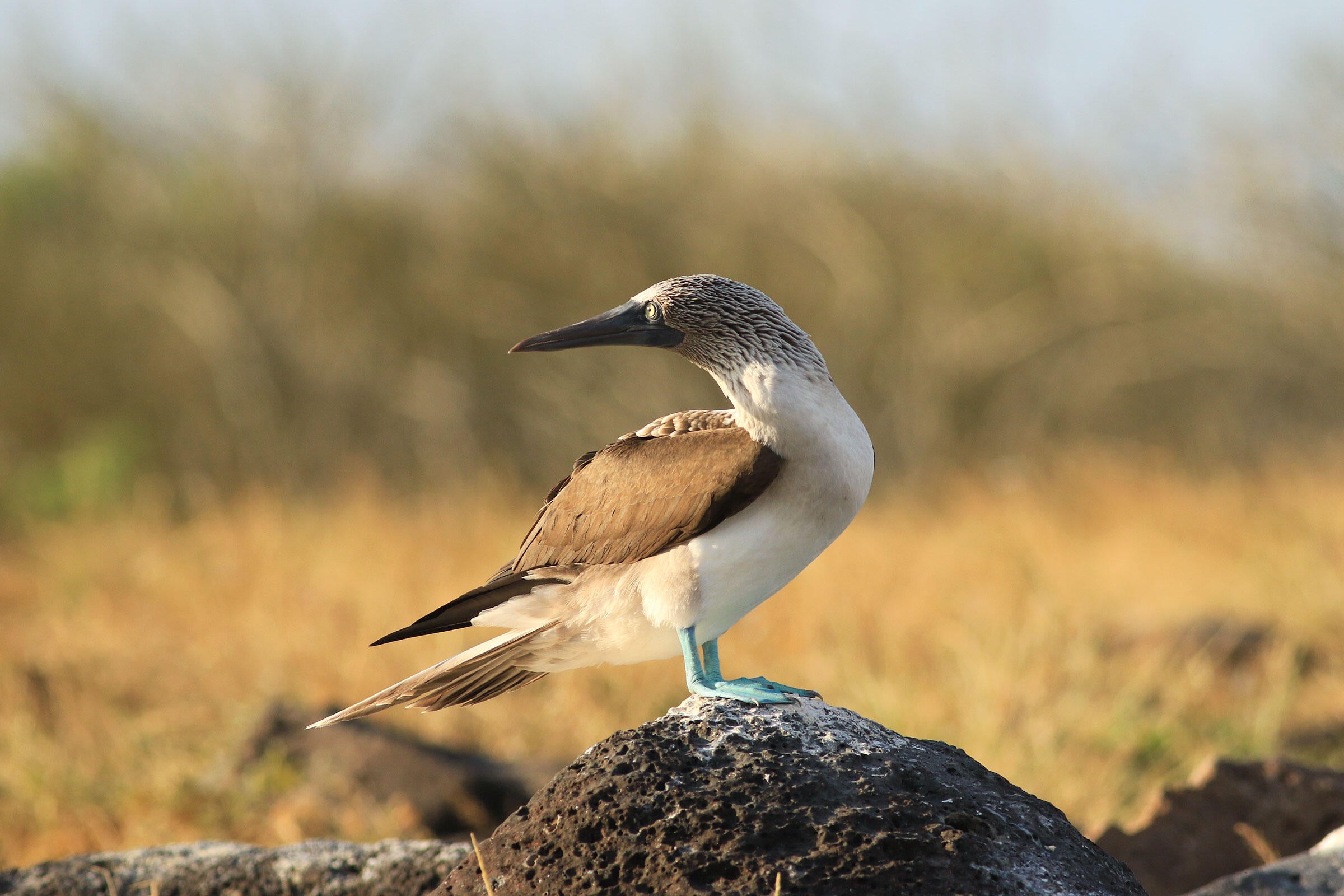 When Anderson and his team were last here in 2012, they found worrying signs of low reproduction rates among the boobies, possibly due to a shortage of wild sardines. The adults were healthy—none were starving—but the population wasn’t growing. This fall, however, scientists have heard reports of a boost in juveniles on the islands. Anderson and his team are checking those claims by tallying both young and old birds. One of the researchers, a local scientist named David Anchundia, will also spend a year sampling their diets.

For his part, Will is hoping to sell enough socks to cover the rest of the conservancy’s costs for the survey. The young birder and entrepreneur also encourages other kids to take action on the issues they care about. “Do some research on a problem and try to think of a creative solution,” he says. He and his brother may soon be expanding their offerings: Recently, they received samples of furry white socks in the mail, which they're considering selling to aid polar bear conservation efforts.

Starting the Blue Feet Foundation has been much more important than adding a booby to his life list, Will says. “It feels like I'm so different from everybody else, and I have this really cool thing in my life.” He’s met and received photographs from scientists and other Blue-footed Booby fans from around the world, including marine videographer Roberto Ochoa He, NFL quarterback Ryan Fitzpatrick, and the color-coordinated Blue Man Group. Will says such support is what inspires the Gladstones to spend their evenings after school filling orders, packing up socks, and doing their part to help the Galapagos boobies one shipment at a time.