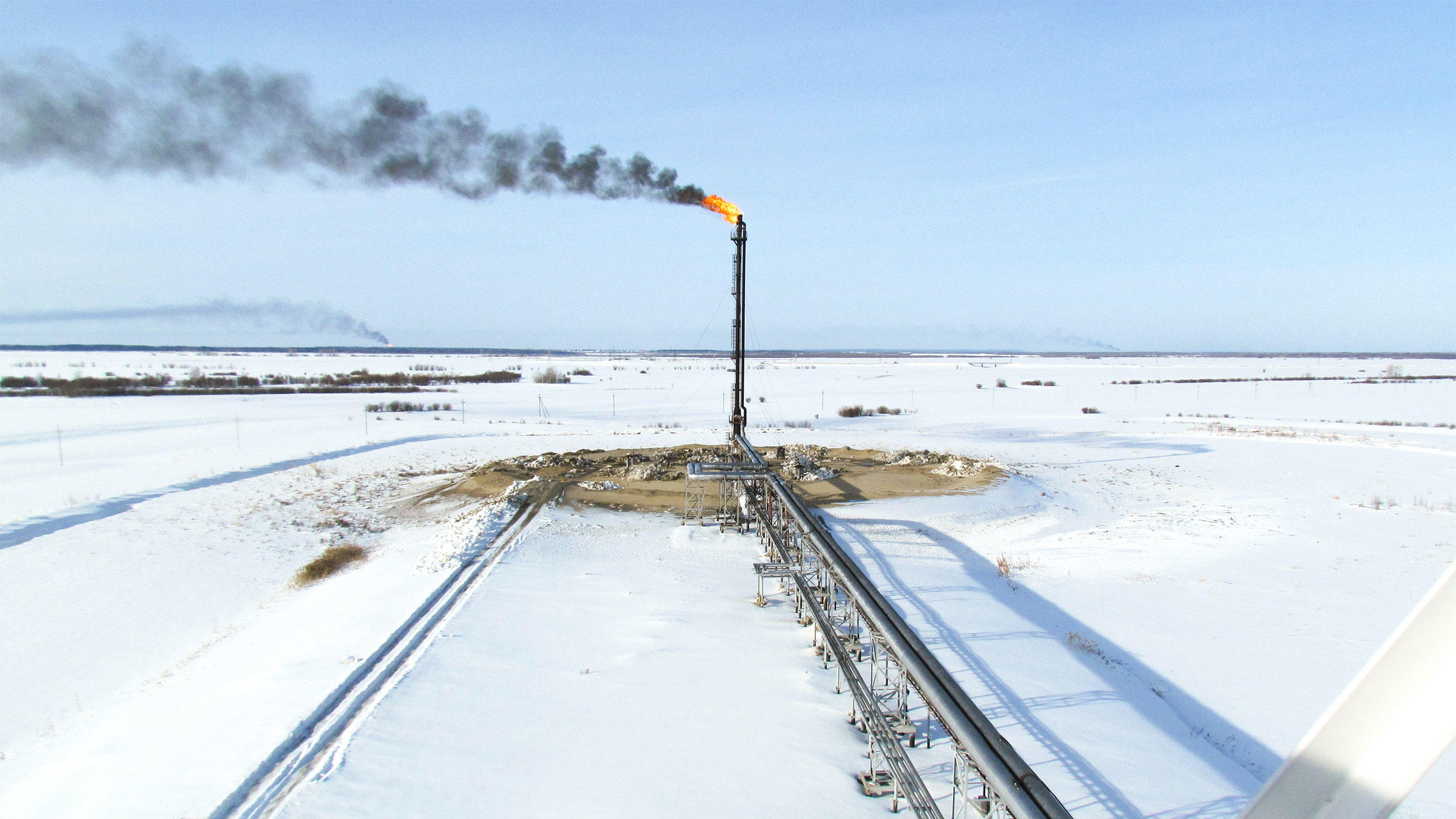 A rule that restricts wasteful gas leaks and keeps a powerful greenhouse gas out of the atmosphere will likely get overturned any day now. Here's why that's bad for everyone.

[Editor's note: In a surprise turn of events, on May 10, the United States Senate voted 49-51 on whether or not to overturn the methane rule, meaning that methane gas-emission restrictions will NOT be revoked. Instead, the Obama-era environmental protections, which focus on limiting the amount of methane gas released or flared from oil production facilities located on federal lands, will remain in force.]

The gas industry has a dirty little secret: It's leaking everywhere. A series of recent studies agree that around five percent of the natural gas produced on federal and tribal lands (some 13 million active acres in 2015) escaped their facilities into the atmosphere. That comes to some 126 billion cubic feet of fuel—enough to power 3 million homes for a year—lost annually.

In November, the Bureau of Land Management (BLM) published a rule that would have companies capture and sell this wasted gas. But their years-long effort will go to waste, along with all that gas, because Congress is moving rapidly to repeal it. This morning, the House of Representatives voted 221-191 to overturn the rule; soon, the Senate will vote on a similar measure. President Trump has already stated that he will approve the rule's repeal. (Yesterday, a group of 24 Democratic Senators sent a letter to Senate leaders in defense of the rule.)

The loss of gas has been a problem for years. But the scale of unintentional leaks—as opposed to operational venting and flaring—has become apparent only over the past decade. That’s because methane, the main component of natural gas, is odorless and colorless and therefore invisible in normal light. It wasn’t until operators set up infrared cameras that they could finally see what looks like smoke billowing from their storage tanks and valves.

According to a 2010 report from the U.S. Government Accountability Office (GAO), about half of that lost gas can be easily captured using existing technology, and then companies can sell it for a profit. In addition, it would generate about $23 million dollars in federal royalties and electricity for 1.7 million households, along with reducing carbon emissions equivalent to 3.1 million cars—every year.

After that report came out, BLM decided to update its 30-year-old regulations governing natural gas waste at drilling sites, at the behest of Congress, the Office of the Inspector General, and GAO. Staff spent more than five years conducting public meetings in New Mexico, Oklahoma, Colorado, and Nevada, and considered more than 300,000 public comments when crafting the rule. This past November, the agency published the final version, which requires oil and gas producers on public lands to monitor leaks and install technologies that capture roughly half of the lost gas.

But Congress, as well as the new administration, is set on overturning the methane rule. And they don’t just want to overturn this version; they want to prevent BLM from crafting similar rules governing methane leaks in the future. To do this, they’re wielding the 1996 Congressional Review Act (CRA), which lets Congress overturn rules made in the final 60 legislative days of a prior administration by a simple majority vote (with the president's approval). Until this week, the CRA had been used only one time. Then, on Wednesday, it was used to overturn a rule that barred coal companies from polluting streams near mines.

The rule is an odd target for lawmakers because there’s little to complain about, and measurable good comes from it. The federal government owns these lands, and so they have a right to decide how oil and gas companies behave on them. The rule reduces waste and lets industry sell the captured gas for a profit (which also generates federal tax royalties). Additionally, natural gas emissions are a public health issue. Methane is a potent greenhouse gas, with a heat-absorbing capacity at least 25 times that of carbon dioxide, and contributes to climate change. Other components of natural gas—like benzene, toluene, ethylbenzene and xylene, collectively known as BTEX—can cause breathing and neurological problems, and even cancer.

But the current Congress, led by Congressman Rob Bishop (R-UT) and Senator John Barrasso (R-WY), are dead-set on overturning the rule for a number of reasons. They don't deny that the wasted gas is a problem. Rather, they blame the leaks on poor infrastructure; claim the rule is a job killer; and refute BLM's authority to regulate the leaks in the first place—the same arguments the oil and gas industry makes.

The rule is an odd target for lawmakers because there’s little to complain about, and measurable good comes from it.

First, the lawmakers say that leaking is prevalent only because the growth of the natural gas industry is so fast, and because federal permitting for pipelines is so slow, operators are stuck with more natural gas than they can store or transport. There is some truth to that argument, says Andrew Light, a senior fellow in the climate program at the World Resources Institute. The fracking boom led to an explosion in gas production starting around 2005 through the use of methods that don’t do a great job containing leaks. “When you’re doing unconventional drilling, you’ve got a lot of unanticipated sources of leaking in the system,” Light says. “Also, there’s a capacity issue because basically you’ve got an infrastructure on natural gas to move it around the country that just wasn’t ready for this influx. So that’s going to create leaking.”

But the problem goes beyond the need for new natural gas infrastructure, as lawmakers claim. Nationwide, 300,000 miles of pipelines connect natural gas wells to processing plants to storage facilities to power plants and, ultimately, to your home. At just about every juncture in our existing infrastructure—and especially at production sites—there are opportunities for gas to leak. This is especially true when the pipes are old and poorly maintained; the majority of pipelines that gather gas on site and shuttle it around the country were built in the 1960s and 1970s. The BLM rule would require containment of many of these leak sources.

Lawmakers also argue that this is yet another job-killing regulation with which the oil industry doesn’t want to comply. “The Republican majority in Congress is taking action against excessive and unnecessary regulations,” Senator Barrasso wrote in a press release about the rule, a line echoed by Congressman Bishop. By having to spend money to install the equipment, those in the industry say they won’t be able to hire more workers. BLM estimates that it will cost the industry $125 million to $161 million annually to comply with the rule.

“There are some companies who don’t want to go through the outlay of the upfront cost and then reap a profit down the line,” Light says. “But that’s kind of true for everything, right?”

Alternatively, the regulations could create jobs. People will need to monitor the leaks on drilling sites and also install the methane-controlling technologies. According to a 2014 analysis from the Environmental Defense Fund, the growing methane mitigation industry includes over 70 firms at 500 locations across the country that offer well-paying jobs manufacturing and installing equipment.

Finally, lawmakers say that BLM doesn't have the authority to regulate air quality, which they claim instead falls under the purview of the U.S. Environmental Protection Agency (EPA). This is a revealing argument: In the past, Barrasso and Bishop had no qualms denying the EPA's authority to regulate greenhouse gas emissions, including methane, when it suited their ends—namely, to stall regulations that would have the fossil-fuel industry reduce their emissions. But here, they're happy to defer to the EPA and describe the leaked natural gas as "emissions" rather than wasted resources, which are undeniably under BLM's authority.

So, it looks like no matter how they have to argue it, Barasso, Bishop, and the rest of the Congress that supports overturning these regulations are set on getting their way, much to the detriment of those who care about clean air and the climate-threatened wildlife that doesn't have a say in any of this.