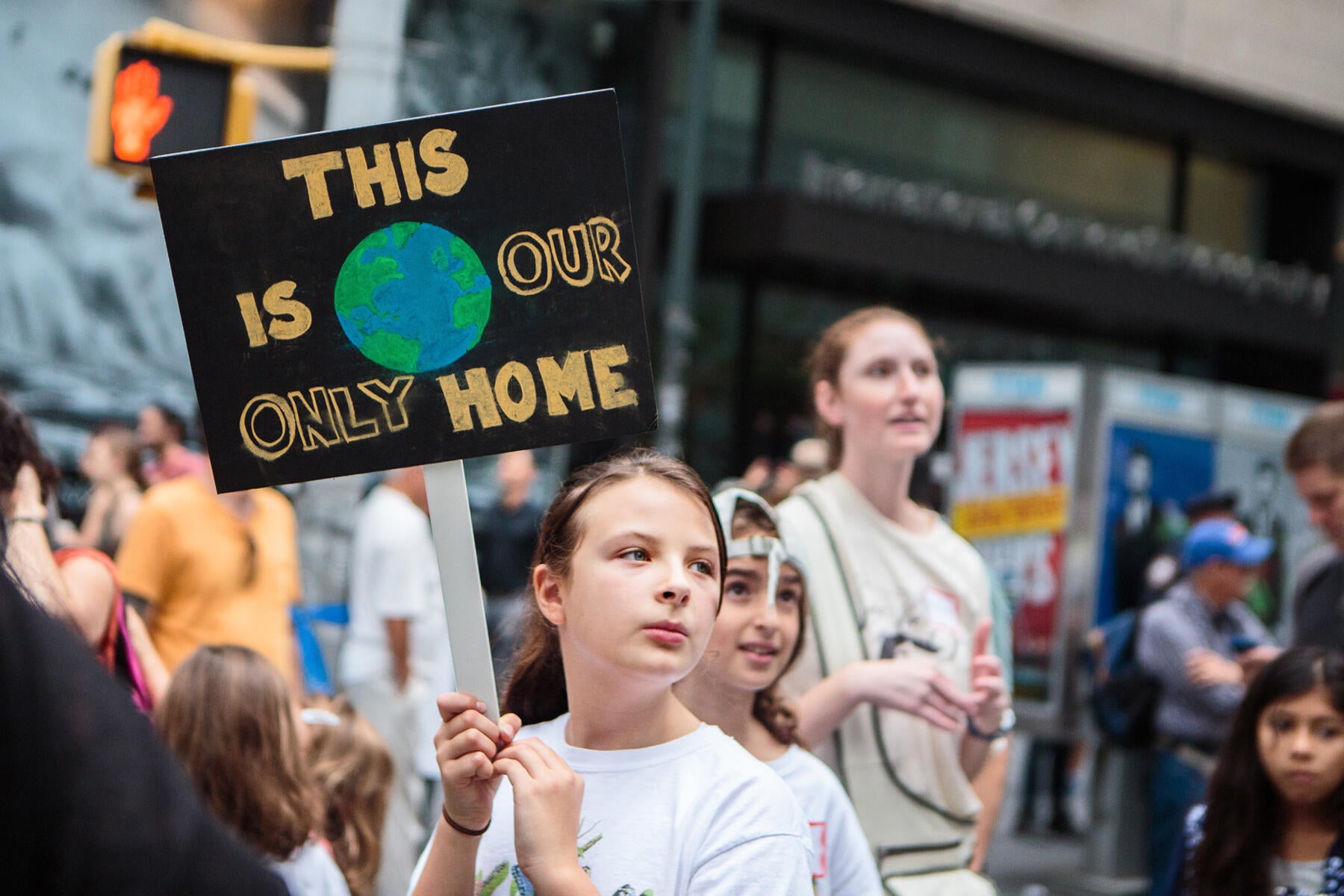 An Audubon member holds a sign at the People's Climate March in NYC in 2014. Photo: Patricia Monteiro

Claiming the unprecedented climate accord was designed to hurt American economic interests, President Trump has pulled the U.S. from the global pact to fight climate change.

For weeks now, the world has waited with bated breath for President Donald Trump to decide whether the United States will continue to collaborate internationally to reduce carbon emissions and prevent the worst impacts of climate change. Since his inauguration, he’s repeatedly delayed making a decision on whether to fulfill his campaign promise of leaving the Paris Agreement, the international climate accord that aims to limit Earth’s temperature rise to 2°C (and ideally 1.5°C). Without urgent, significant action, like the Paris Agreement, the planet will be irrevocably transformed, with some of the worst potential effects including flooded coastlines, dead and dying coral reefs, increased droughts and wildfires, wildlife extinctions—and tragic human impacts that will hurt the disadvantaged most.

For most people, this wouldn’t be a difficult decision: 195 countries have already signed on, and last week, the world’s economic leaders (excluding the United States) reaffirmed their commitments at the G7 summit in Italy. Major corporations— Apple, Morgan Stanley, Intel, Unilever, and Microsoft, to name a few—are all committed to climate action. These include Exxon and other oil and gas companies, and even some coal companies. Human rights and environmental organizations, including Audubon, want the United States to remain in the agreement to spare needless destruction to people and wildlife, present and future.

Despite this overwhelming support, Trump today announced that the United States will exit the Paris Agreement. In his speech in the White House Rose Garden, he expounded on an unfounded theory that the Paris Agreement is designed to hobble the nation by undercutting its fossil-fuel industry and redistributing its wealth to other countries.

“I cannot in good conscience support a deal that punishes the United States, which it does,” the President said. He boasted of the “highest standard of environmental protection” and promised to “work to ensure that America remains the world’s leader on environmental issues,” even as he signed an order to exit from the unprecedented environmental accord.

Get involved with a local chapter! Some recent successes:

In his speech, Trump didn’t specify how the United States would technically exit the agreement; the official pathway takes four years after the accord entered into force, which places the exit date as November 4, 2020, the day after the next presidential election.

The United States is the world’s second largest emitter of carbon, responsible for some 17 percent of global emissions, and so an important partner in any climate agreement. Its official exit means that the nation will no longer be held to its pledge to reduce carbon emissions by 26 to 28 percent below 2005 levels by 2025. It also removes the United States from diplomacy and trade related to climate change and renewable energy, and reduces its standing in the international community.

But a U.S. exit doesn’t necessarily doom international climate action. That’s because the Paris Agreement was designed to withstand the exit of a major world power—as long as enough of the international community persists in their efforts. Today’s announcement will ultimately test the strength of the pact itself, and whether the international community can stand up to the administration and its “America First” doctrine, which Trump said he would wield while trying to renegotiate a new deal for any future U.S. involvement in the agreement.

The Paris Agreement’s written goal is to cut carbon emissions, but the path to reaching that goal is transitioning the world toward a renewables-based economy. That will require extensive investment, technological development, manufacturing, and distribution—so much that countries can only succeed if they share the load over many decades.

In December 2015, at the COP21 meeting in Paris to draft the treaty, the authors of the accord estimated how much global buy-in the pact would require to power this transition. The authors figured that as long as half of the world’s economy and roughly a quarter of the countries are committed to renewable energy, they’d be able to work together to make it happen. So they came up with a number: 55. For the Paris Agreement to enter into force (in other words, when all members of the pact agree to respect it), 55 countries representing 55 percent of the world’s carbon emissions had to ratify the accord and submit their pledges detailing how they plan to reduce carbon emissions and by how much.

After the United States formally exits, 143 countries representing 65 percent of the world’s emissions will still be left in the accord—more than the target.

The U.S. exit will thus test the will of the international community to see Paris through without the United States, and world powers are posturing as though they intend to do so. Yesterday, Pilita Clark of the Financial Times reported that the European Union and China plan to announce “a green alliance to combat climate change and counteract any retreat from international action by Donald Trump” later this week—a public doubling-down on the Paris pact.

Meanwhile, the Trump administration seems to be doing everything in its power to ensure that the U.S. economy is left out of the global transition to renewables. In addition to beefing up the oil and gas industries—by rolling back the Clean Power Plan and reviewing a suite of rules and regulations that would prevent pollution, for starters— the Department of Energy is studying whether renewable energy subsidies put fossil fuels at a disadvantage, even though fossil fuels are subsidized, too. These subsidies were put in place to encourage the development of wind and solar industries here in the United States, and the study could serve as justification to undo them.

How You Can Help

Those actions don’t make the U.S. climate movement hopeless; it just means that the onus to reduce U.S. emissions will fall on citizens, states, and local governments without help from the federal government.

Already around the country, states and cities are setting their own carbon emissions goals and passing laws to meet them. After Trump's address, 61 U.S. mayors made a promise to uphold the goals laid out by the Paris Agreement, while the governors of Washington, New York, and California announced a new climate alliance. California is leading the effort in other ways, too: Yesterday its State Senate passed a bill to produce all of its energy from renewable or zero-carbon sources by 2045. Twenty-eight other states plus Washington, D.C. have set similar renewable energy standards. Many corporations have followed by setting their own reduced emissions targets.

All of these efforts ensure a U.S. market for renewable energy sources, which are already thriving. Solar and wind prices are falling fast, and last year the number of solar installations doubled compared to the year before.

Even though Trump is having the nation exit the Paris Agreement, the American people and local governments can still make a difference and help the countries that remain commited to the pact curb global emissions. If the international community holds it together and millions of U.S. residents commit to climate action locally, Trump may end up being a catalyst for the climate action that he so decries as unfair to American interests.