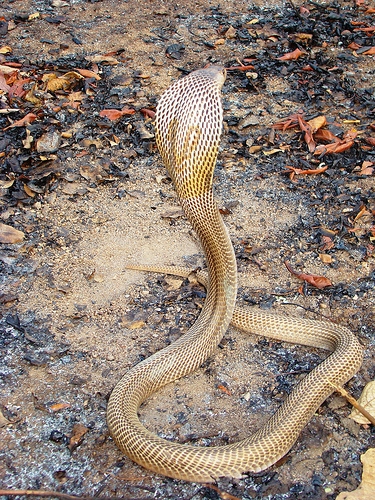 Cobras use their hood as a warning when they feel threatened. Photo: Vikas Sharma / CC BY-NC 2.0

Last week, Mohamed Salmo Miya was working in his rice paddy in Nepal when a cobra bit him. Although the snake tried to make its escape afterward, Miya wasn’t going to let it get away with the assault. Instead, the spry 55-year-old chased the snake, caught it, and then bit it back—several times.

Although Miya survived his bite, the snake didn’t. The venomous bite of the common cobra is highly neurotoxic, causing respiratory paralysis and tissue damage. With the ability to spread out the sides of its neck to form what looks like a hood, the cobra usually will not bite unless it feels threatened. Fortunately for Miya, he was rushed to the hospital after being bit by (and biting) the snake, according to The Guardian.

“I could have killed it with a stick but bit it with my teeth instead because I was angry,” said Miya in an interview, according to The Guardian.

Unlike the king cobra, the common cobra is not threatened; a good thing for Miya who won’t be facing any charges for killing the snake.