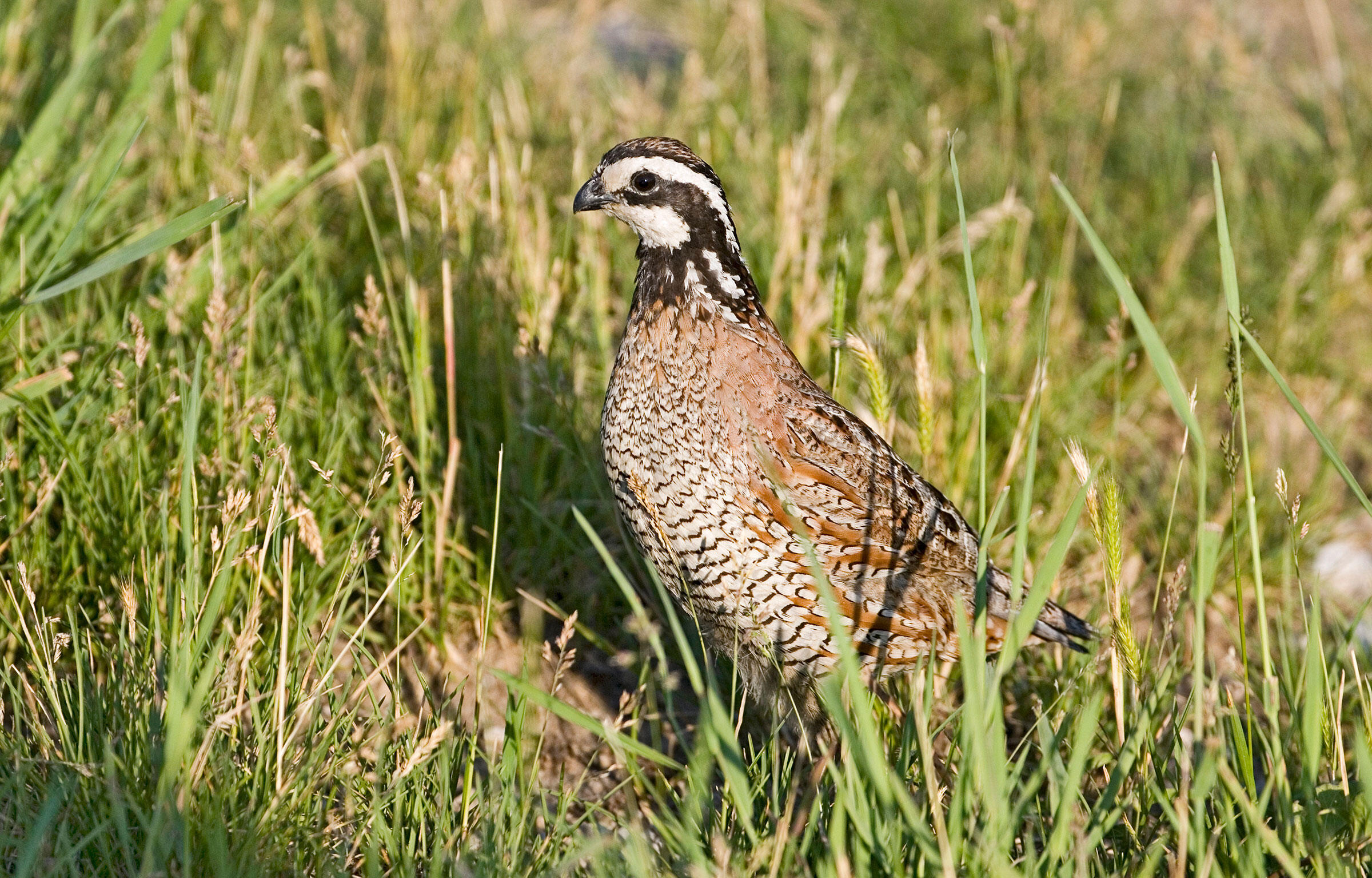 The Northern Bobwhite is the target bird for native-landscaping efforts in former coal-mining areas in western Kentucky. The species has failed to gain a foothold through straight reintroduction, but an uptick in grassland habitat could be the key to a stable population in the region. If the model works, it may inspire other grassland-reclamation projects across the country. Photo: Rick & Nora Bowers/Alamy

Step out onto the Peabody Wildlife Management Area in western Kentucky and you’ll hear the whistle of Northern Bobwhites, the chatter of Bell’s Vireos, and the screech of Northern Harriers. As far as the eye can see, the landscape is painted with lush shrubs and glassy ponds.

But buried deep out of view is a skeleton from Peabody’s past: the Bucyrus Erie 3850-B, the biggest power shovel in the world during the 1960s and ‘70s. In its 23-year lifespan, the “Big Hog” scraped 80 million tons of coal from the hills around Paradise, a quaint boom town stationed 20 miles west of Peabody’s southern border. The history of Paradise stretched long before and after Big Hog, but as mining loosened its grip on the area and pollution intensified, residents and businesses fled.

The land that became Peabody Wildlife Management Area would have been abandoned as well, if not for a slew of federal regulations to clean up old mining lots. In 1977, a decade before the Big Hog operation shut down, the Surface Mine Control and Reclamation Act (SMCRA) established guidelines for extractive industries, directing them to purge water pollutants and heavy metals from their dormant properties on a five-year timeline. Since then, more than 2.6 million acres have been reclaimed by state and tribal governments under SMCRA, with millions more across the country left to be salvaged.

At Peabody, the comeback is visible but incremental. Starting in the 1990s, conservationists have been tackling a portion of the 46,000 acres—now owned and managed by the Kentucky Department of Fish and Wildlife—with weed killer and strip disks to coax Northern Bobwhites, Henslow’s Sparrows, and other historic species back to the property. With grassland habitat in sharp decline across the country, the hope for researchers and conservationists is that sites like Peabody can help fill a disappearing niche for struggling biota. And while the end goal is clear, the roadmap for restoration is much less so.

Grassland ecologist Ashley Tanner is one of the hopefuls. She watched Peabody inch back to life while running vegetation surveys for the University of Tennessee from 2010 to 2012. The sight of Mississippi Kites coupled with the area's high bird diversity thrilled her, but the real shock came when she visited her grandparents in Pennsylvania one Christmas. The post-industrial landscape there looked like western Kentucky: flat, bushy, and unruly. “I was like, holy cow," Tanner says, "this was a reclaimed coal mine." This was what could be achieved at Peabody.

Emphasis on the could. For decades, Peabody has been plagued by shoddy restoration work, says Jerry Durham, a resident of the area for 70-plus years. “We used to call it a wasteland,” he recalls of the early mine reclamation that left bumpy scars across the land. “You couldn’t drive any kind of vehicle over it; you couldn’t hardly walk over it.”

Eventually, neglect gave way to invasive plants. Lespedeza cuneat, better known as sericea, was sown across the tract to anchor the tired, brittle soil. Originally from Asia, the white-budded legume was first introduced to the United States in the late 19th century. It then spread across the Southeast, thank to its tenacity and ability to resprout from its roots. “It’s a plant that grabs at your ankles every chance it gets,” says Chris Lituma, an ecologist at West Virginia University. Without a watchful, informed eye, the plant also conquered Peabody.

For small wildlife like the charming bobwhite, sericea has one upside: The clumpy sprigs serve as the perfect hiding spot from birds of prey and other predators. “Animals can’t necessarily identify native versus non-native plants—they’re not botanists,” Tanner says. “But they can identify the different kinds of structure [and uses].”

Camouflage aside, sericea doesn’t hold many perks for birds. The seeds have little nutritional value and are hard to digest, and the plant hosts few insects, which are the go-to snacks for bobwhite hatchlings. Patrick Keyser, a plant scientist at the University of Tennessee, Knoxville, studied the species’ health on Peabody from 2010 to 2013. “These quail were nutritionally deficient,” he says. “They were hungry.”

With that in mind, in 2009, state fish and wildlife staff started attacking the weed a few hundred acres at a time and replacing it with native grasses. All told, they spent more than 9,000 human hours overhauling Peabody’s plant community over a six-year period.

Much of that labor was meant to benefit the bobwhite, a favorite among birders and hunters in the Eastern United States. Populations of the chubby, chestnut quail declined by 70 to 90 percent nationwide between 1965 and 1995, due in part to grasslands being converted to farmland. To bolster their population in Kentucky, more than three million captive-raised bobwhites were released across the state over the course of 40 years, ending in the mid-1990s. The effort failed; the vast majority of the birds died in the jaws of coyotes and raptors.

By 2015, bobwhite populations in treated sections of the tract had increased 56 percent.

“It’s been one of the toughest nuts to crack,” says John Morgan, the small game coordinator for the Kentucky Department of Fish and Wildlife. Overall, he’s pleased by how quickly quail have responded to the native grasses that have replaced the sea of sericea at Peabody. “We put a grocery store out there and gave them some choices,” he says. By 2015, bobwhite populations in treated sections of the tract had increased 56 percent. The 2017 fall survey showed a slight bump in numbers as well.

Despite these heartening results, Morgan and the quail team remain concerned. The birds’ year-to-year reproductive success is low on Peabody, and without a regular supply of baby bobwhites, the site will never sustain a stable population. Morgan wishes he could track the eggs as they hatched to see exactly what’s going wrong. One factor, he says, might be that bobwhites nest best in clumps of shrubs and forbs, which are still in short supply in the landscape. Until the staff can learn to cultivate those plants, the birds will have to get by on Peabody's scanter resources.

If the quail fare well, however, the rest of the grassland denizens will follow. The Northern Bobwhite is an indicator species of sorts; its presence hints at a rallying, recovering ecosystem. In western Kentucky, Northern Harriers and Red-tailed Hawks have posted strong numbers in quail-filled clearings. American Kestrels and Barn Owls are filling up nest boxes around Peabody, and Bell’s Vireos are remarkably common for an area so far east. The place once made famous by a coal-shoveling machine now serves as a getaway from the miasma of industry.

It's still too early to call Peabody a success. The reclamation process, as slow as it is, can be capricious when nature gets its way. Grasslands are a prime example of successional habitat: Once a few years have elapsed, trees will creep in and shade out the shorter plants, eventually transforming the landscape into forest. There are other natural cycles that can help reset the land—a fire every now and then, or energetic snacking by four-legged lawn mowers. But fires don’t jive well with human activities, and herbivores don’t survive long in the food chain. So, that leaves fewer disturbances to clear the way for grasslands.

To some land managers, forests seem like the obvious choice for reclamation. They house a wide swath of wildlife and deliver the lush greenery that's often equated with healthy habitat. Virginia, for instance, considered converting reclaimed mines into quail habitat, but ultimately decided to turn them into elk-friendly woods. Kentucky, on the other hand, is betting on grasslands far and wide. Earlier this year, a 12,000-acre grassland-focused education center opened on the eastern side of the state. About a third of it is former mine lands.

The Peabody model isn't meant to work everywhere. But with coal mines closing at record speed, the importance of understanding the different outcomes grows. For Tanner, who now lives in Oklahoma, the struggle lies in helping others realize the potential of reclaimed lands. “There’s a difference between feeling great about coal mining and feeling great about a reclaimed coal mine,” she says. Scientists don’t have time machines; they can’t go back and stop mining from laying waste to Paradise. But what they can do is seize the opportunities that process has created, Tanner says. “It’s important for biologists not to turn their noses up at that sort of space.” 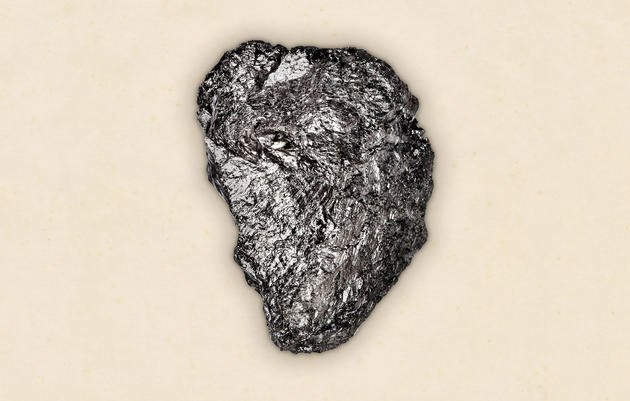 Here’s the Ugly Mess Coal’s Decline Could Leave Behind

Some of the biggest companies haven’t been setting aside resources to clean up their mines, and the Interior Department is stepping in. 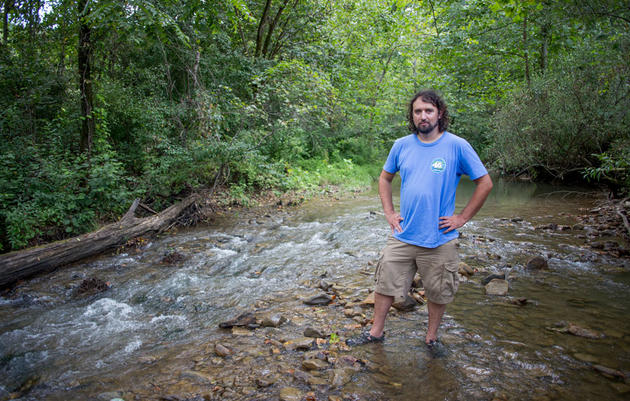 With Matt Hepler’s help, Appalachians are leading investigations, lawsuits, and economic ventures to reclaim neglected lands and tainted waters.​ The White House seems determined to get in their way. 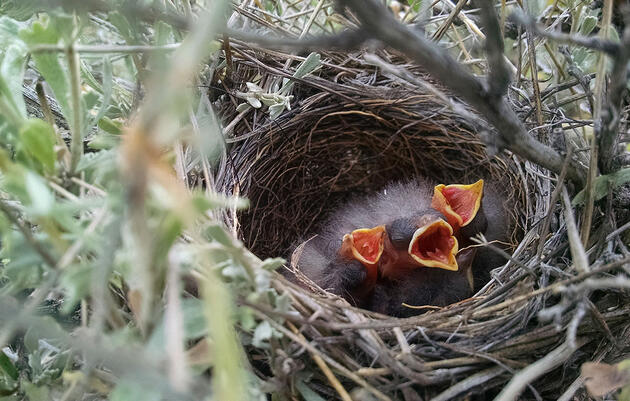 Scientists and federal experts are finding that habitat restoration in oil and gas fields can have unexpected consequences for Wyoming's songbirds.