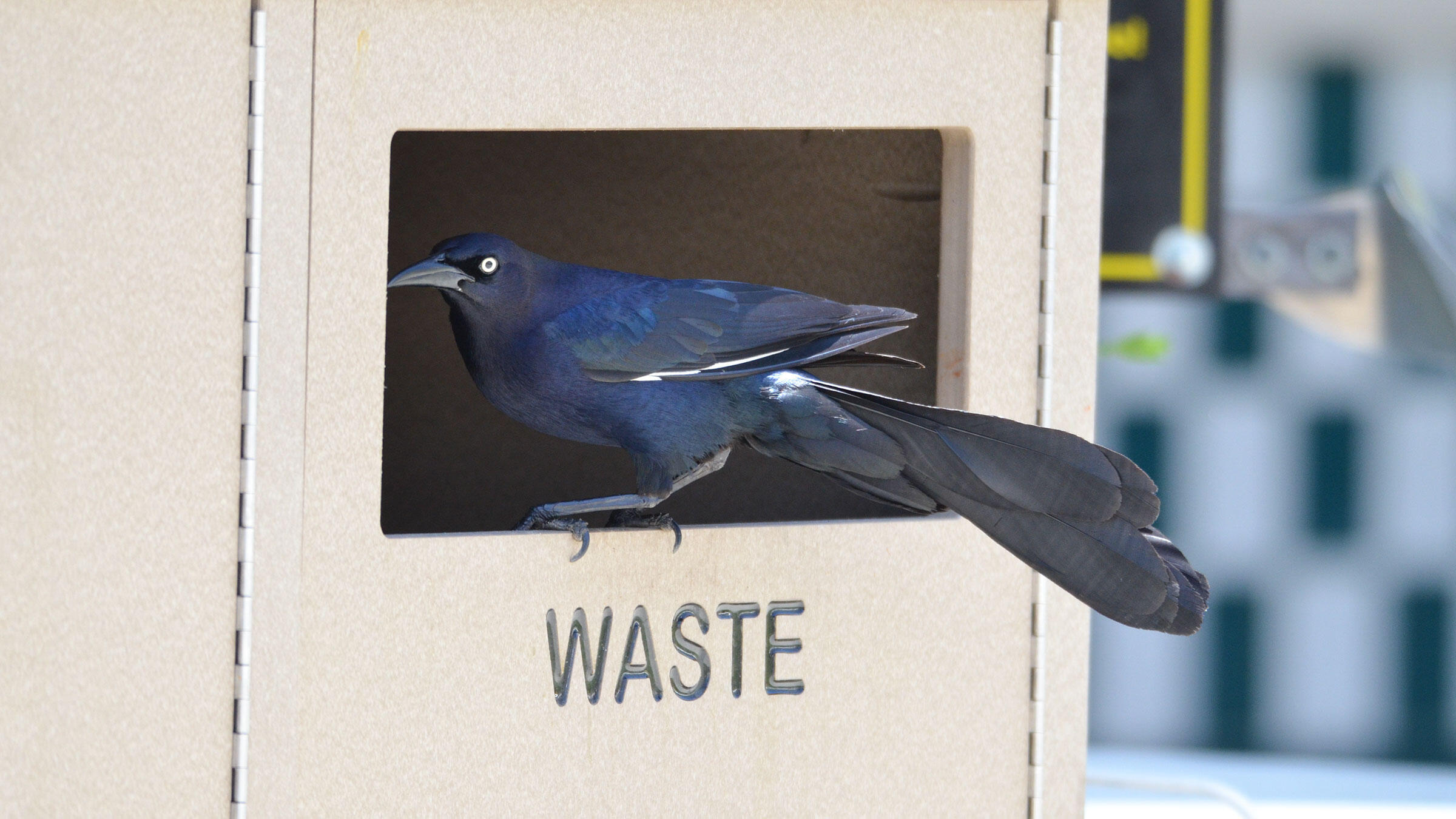 Old habits die hard—but not for the Great-tailed Grackle.

This desert-adapted bird doesn’t need much beyond grain, trees, water, and its own wits for survival. Once confined to Central America, the big, brash species began moving north 200 years ago, and now covers an immense region from northwestern Venezuela up to southern Canada—a range increase of more than 5,000 percent. Its global breeding population is estimated to be a healthy 10 million, thanks to the bird's capricious and adaptive nature.

For Cambridge University research fellow Corina Logan, the idea of an entrepreneurial blackbird was one worth studying. Logan thought the Great-tailed Grackle would make an interesting candidate to analyze “behavioral flexibility"—the vaguely defined term for how swiftly an animal can alter its behavior to match a unique situation.

She was on the right track. As a junior research fellow at the SAGE Center for the Study of the Mind, Logan began testing the skills of eight wild Great-tailed Grackles from parks around Santa Barbara, California. The birds were made to play the well-known Aesop’s Fable paradigm, which Logan says has never before been conducted on any species outside the corvid family. The experiment tests a bird’s problem-solving power by posing glass cylinders full of water with bits of food floating just outside of the animal’s reach. To grab the morsels, the subject must drop in pebbles to raise the water levels.

Unlike crows, grackles aren’t notorious for using tools, Logan says; yet after a few hundred trials, most of the study birds figured out how to nab the snack. They also proved their knack for efficiency—preferring heavy pebbles to light ones—and flexibility by turning to the small stones when Logan made the larger ones ineffective.

For the second test, she homed in on the grackles’ ability to master a task and then shift their approach as the circumstances changed. She presented the same sample of birds with silver- and gold-colored tubes of food. “I didn’t even have to train them for this one,” she says. At first, Logan placed peanuts and bread in the gold tube only. Then she changed the rules by switching the food to the silver tube. The speed at which the grackles learned to associate the new color with the reward clued Logan in to how flexible they really are.

In both learning and reversing, “grackles outperformed three species in the crow family and rivaled Darwin’s Finches” in the same tests, Logan says. But skill and speed didn’t always align. Individuals that scored high in problem solving weren’t necessarily the quickest to adjust during the gold-silver swap, she adds.

This mismatch led her to wonder if behavioral flexibility and problem solving could be two independent traits. In the field of animal cognition, Logan says, the two are often viewed as an interconnected measure of intelligence. But the birds in her study used a variety of approaches to tackle each task, hinting that the idea of behavioral flexibility may be quite flexible in itself.

So, in her latest round of experiments, Logan dove deeper into pitting adaptation against inventiveness. She tried three tool-based tests on Great-tailed Grackles: stick use, string pulling, and stone dropping (this time onto a platform-based apparatus). Her results, published earlier this week, showed that the grackles weren't particularly spontaneous when it came to overcoming these novel problems: Though they were able to tackle the tests after being trained, they didn't have the capacity to try new behaviors. This contradicts the theory that behavioral flexibility and innovativeness are interchangeable, Logan writes, and proves that a lack of one doesn't exclude the other.

Ornithologist John Marzluff, who’s been testing cognition in crows for years, thinks that Logan’s work draws attention to the non-uniform nature of bird intelligence. “[Logan] clearly demonstrated variability that different individuals have when it comes to learning,” he told National Geographic.

Other scientists in the field find Logan's initial data pool too small. “It’s a huge effort to carry out all of these different tasks and look at the relationship between them,” says Andrea Griffin,  who studies behavioral flexibility in Common Mynas and Noisy Minors at the University of New Castle in Australia. She thinks it’s too early to jump to conclusions: “You’re not going to see correlations when you’re looking at eight individuals,” Griffin says, “but it doesn’t mean that they’re not there.”

Logan is already working on fixing this vice. “Future studies will include having a much, much larger sample size to study from,” she says. She also hopes to track Great-tailed Grackles throughout their lengthy 12-year lifespans and sweeping ranges to see if flexibility differs with age or location.

“One of my quests is to figure out what it is that we’re actually looking at,” Logan says. “For me, behavioral flexibility is something that we need to kind of figure out from scratch.”