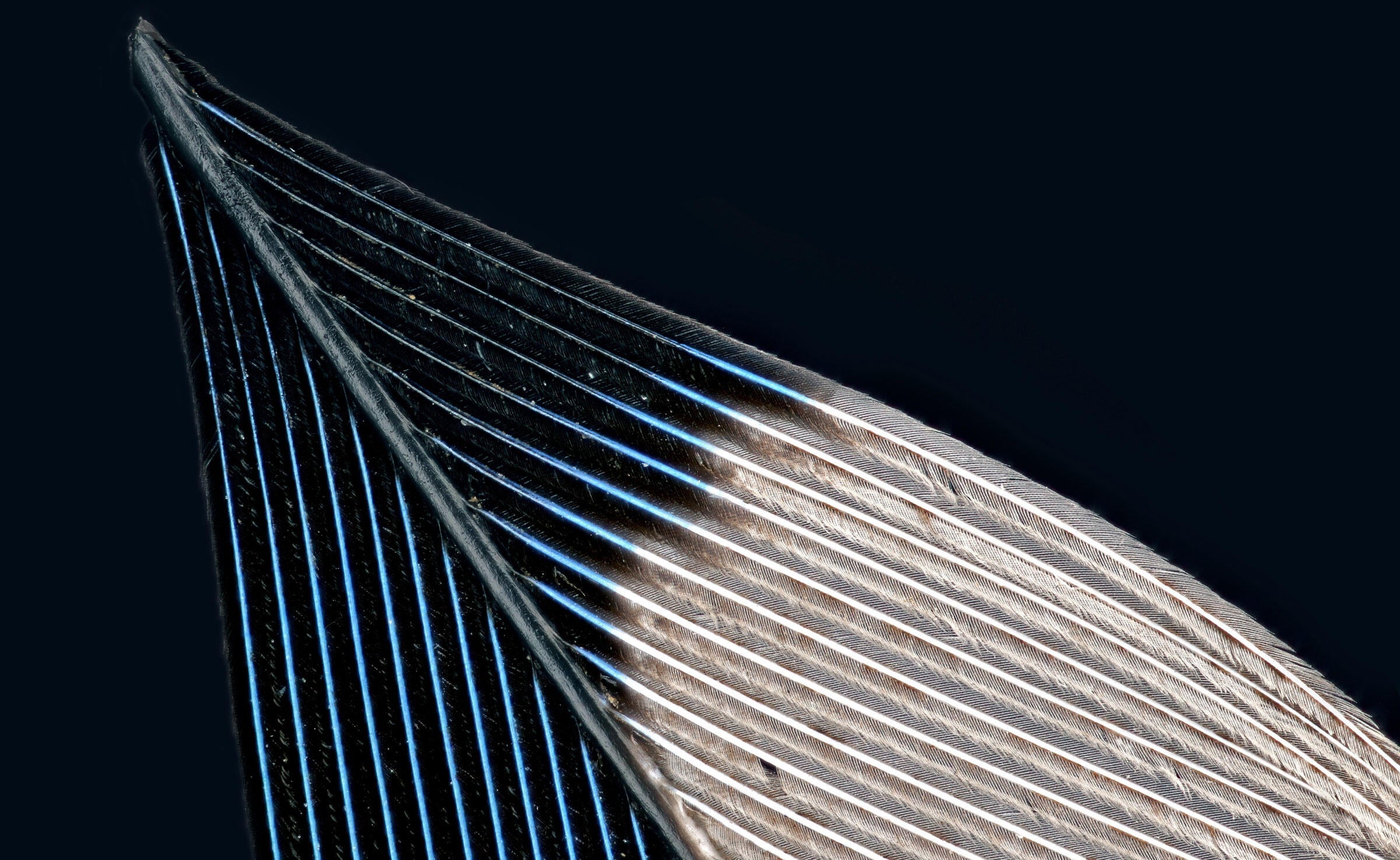 An up-close look at a Blue Jay feather reveals its complex, bristly structure. But there are even more details that are unseen—microscopic keratin particles that are equally as intricate in their design. Photo: Macroscopic Solutions/Flickr CC (CC BY-NC 2.0)

From radiant jewel tones to bold browns and black—here's a complete, concise guide to bird coloration.

The iridescent ruby-red throat of an Anna’s Hummingbird, the stunningly bright blues and yellows of the (aptly-named) Blue-and-yellow Macaw . . . admit it, you get color envy every time you see a flashy bird. But have you ever stopped to think about how these creatures get to be so dazzling?

It’s not just an abstract question. Birds rely on their coloration and feathers to communicate with others of their kind, especially during mating season. Male House Finches, for example, look flushed when they have better access to food while molting—important knowledge for a female that’s seeking a healthy, resourceful mate. And male Eastern Bluebirds that sport ultraviolet hues and darker breast patches fledge more offspring—a good hint that they make better partners in the nest.

Color is so important to birds that they’ve evolved a whole host of ways to paint their feathers. Here’s a primer on how some of the different hues come about.

Blacks and browns come from the same pigment that's in human skin.

If you love the dark black of a crow or the brown stripes of an owl, you can thank a molecule called melanin: The same substance that provides color to our own skin and hair is also responsible for the darker colors on birds. These colors are especially prevalent on birds’ flight feathers—for good reason. Melanin is very strong, and allows the hardest-working feathers to better resist wear and tear. That not only allows the bird to remain in tip-top shape, but according to a decades-old experiment, also allows it to be 4 to 9 percent more aerodynamic. 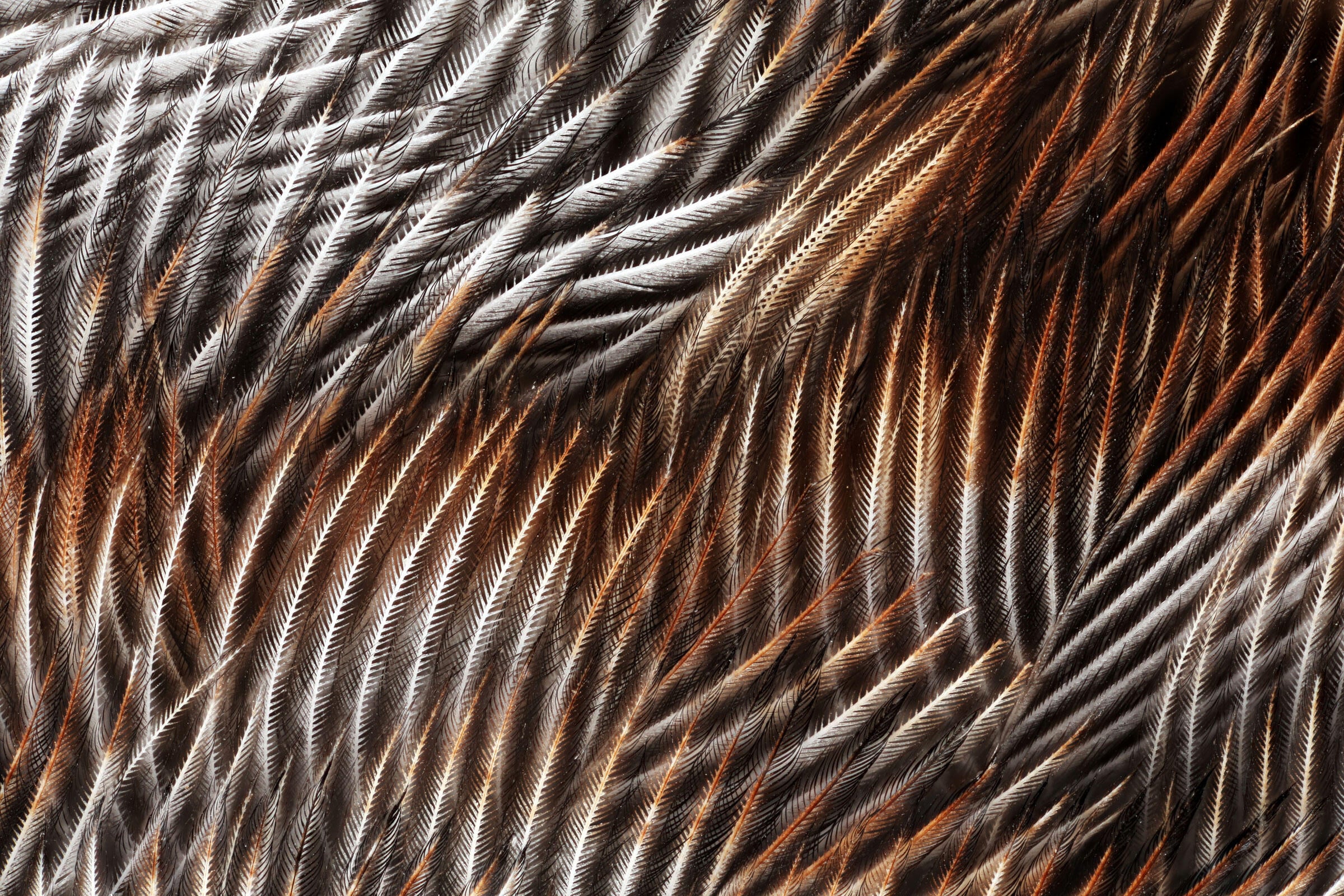 The brown on a White-throated Sparrow's feathers comes from melanin. The white represents the absence of pigment. Photo: Macroscopic Solutions/Flickr CC (CC BY-NC 2.0)

Warm colors come straight out of the food birds eat.

Melanin isn’t the only pigment that leaves its mark on feathers. The next group is called carotenoids, and they create most of the reds, oranges, and yellows in birds. There are more than 600 types of carotenoids, and they all require photosynthesis to make, so birds have to borrow them from plants and a few types of bacteria and fungi. This, for example, is how flamingos come to be pink: Newly hatched chicks are grey and have to accumulate the pink from their diet; darker flamingos betray their love for algae, while lighter ones get their carotenoids second-hand, from shrimp and other crustaceans. Carotenoids are also seen in songbirds, but tend to be rare among game birds. In January, however, researchers discovered that the extinct Pink-headed Duck—last seen in the wild in 1949—owed its pink crown to this pigment. The only other duck known to use carotenoids is Australia's Pink-eared Duck, known for . . . you guessed it . . . its pink ear spots.

The last group of pigments, named porphyrins, can only be found in a scant handful of birds. In 1868, British chemist Arthur Herbert Church discovered that some feathers are colored by a pigment he named turacin, after the turaco birds that he found them in. Turacin is about 7 percent copper, which is why it gives off such a blinding-red hue. Meanwhile, a similar pigment called turacoverdin provides green coloration. Parrots can also get their reds, oranges, and yellows from a special group of pigments called psittacofulvins.

Cool colors and iridescence come from crazy micro-structures in feathers.

Keratin is a crucial protein in human nails, rhinoceros horns, whale baleen, turtle shells, pangolin scales, and of course, bird feathers. The way it’s structured allows light to twist and turn and separate into a rainbow of iridescence. In essence, keratin allows feathers to act like a prism by scattering the longer wavelengths of light and reflecting shorter ones to emit gorgeous blues, violets, purples, and greens. Sometimes the feathers have air pockets, which allow them to display only one color at a time. That's how jays get their bright, tell-tale blue appearance. The light-bending protein can also be layered onto other pigments: for instance, mixing blue light with underlying yellow carotenoids makes green feathers. It's not all too different from your old-school color wheel.

And then there are some birds that still need “make-up.”

Feathers face their fair share of damages, too. They accumulate dirt, are exposed to ultraviolet radiation, and get worn down by parasites and microbes. Perhaps this is why birds spend so much time grooming. Study after study has shown that male birds with well-maintained plumage are healthier, more socially dominant, preferred by more females, and have higher reproductive success than their more haggard counterparts. It’s all thanks to preen wax, which is secreted by a gland near the base of the tail on every bird. The substance helps to keep keratin flexible, allowing feathers to stay water-repellent, providing protection against feather-degrading bacteria, and more. It also makes feathers appear more deeply saturated with color. Flamingos use the carotenoids in their preen wax to make the carotenoids in their feathers appear even more colorful. In a sense, the wax functions as a type of avian make-up.

This sort of cosmetic manipulation has been seen in at least 13 bird families. While most of them make their own ingredients, some use parts of the environment, like soil. Perhaps the best-known example of a bird that uses dirt as make-up is the Lammergeier, a species known for its bright orange underside, neck, and head. At one time its color was attributed to carotenoids; but now it's widely accepted as being sourced from iron-oxide-rich soils. No one knows why the vultures bathe in filth, though it's evident that the ruddiest ones get the most respect.

Well there it is . . . all the secrets to feather colors. If there's one thing to take away from this guide, let it be this: Birds can wear anything and still look extremely good. Bravo, birds, bravo.