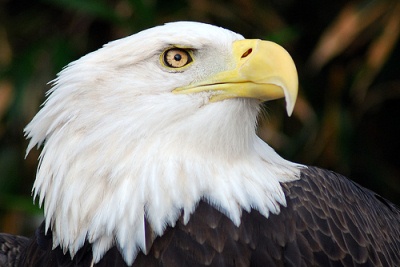 One of two captive bald eagles at the Salato Wildlife Education Center in Frankfort, KY. Photo: Pen Waggener / CC BY 2.0

This year’s presidential campaigns are noticeably bereft of serious environmental discussion (see "The Big Crackup"). Instead of pushing green issues, the candidates have chosen to focus on other topics, such as the economy. If it were a typical campaign season, however, Americans might have expected the Democratic candidate to be championing eco-causes.

“It’s become polarized in a way that it’s become a left/right thing,” says David Jenkins, vice-president of ConservAmerica, a Republican environmental organization that has supported land and water conservation and clean energy investment while emphasizing the importance of the history of conservation. “But this is a recent phenomenon. If you look back in history, you can see that conservatives are responsible for many of the conservation accomplishments.”

For instance, Theodore Roosevelt (a Republican president, though he did harbor some modern-day Democratic notions) protected vast swaths of land for public use, creating our first national parks. An avid hunter and fisherman, Roosevelt believed in the sustainable use of resources while preserving them for future generations. “I do not intend that our natural resources should be exploited by the few against the interests of the many,” said Roosevelt in his acceptance speech during the 1912 Bull Moose convention.

Other Republican presidents ranging from Calvin Coolidge, who spoke against waste of natural resources, to Ronald Reagan, who signed 43 wilderness bills into law, made conservation part of their mission during their White House tenure.

The environmental movement may have gotten a kickstart with Theodore Roosevelt (at least where presidents are concerned), but Democrats also played their parts. Presidents such as Jimmy Carter, who oversaw the Soil and Water Conservation Act and the Endangered American Wilderness Act, and John F. Kennedy, who helped lay the groundwork for the establishment of the EPA and modern environmental protection laws, were crucial in environmental protection.

Recognizing that both Democrats and Republicans share a pro-environment heritage, the National Audubon Society is partnering with ConservAmerica in an effort to create more environmental awareness and to emphasize the concept that conservation transcends party lines.

“Because Conservation Doesn’t Have a Party,” as the campaign is called, will attempt to highlight issues that everyone should be concerned about—from U.S. energy policy to the Endangered Species Act—through a website, which includes a blog. It will also encourage the public to get in touch with their local government officials and to sign the American Eagle Compact, an online document that highlights a common vision of stewardship and conservation of natural resources. Following through with that vision is vital not just now, but for future generations, according to Rob Sisson, president of ConservAmerica.

“In too many states when land decisions are made, the people who turn out to talk to legislators are the people at the extremes,” says David Yarnold, president of the National Audubon Society. “Enlisting people who can be advocates for conservation and not just for their parties will be a huge step forward.”