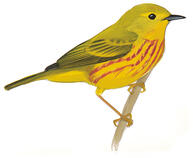 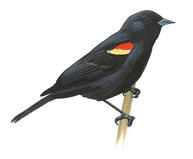 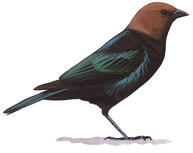 Spring is here and soon Yellow Warblers will begin arriving from their wintering grounds in Central and South America. Singing their sweet sweet sweet, I’m so sweet tune, these vibrant migrants breathe new life into moist scrub and wetland habitat across much of the U.S.

While the Yellow Warbler is best known for its cheery song, the birds also produce a seet call that many birders might recognize. Research has shown that these calls are distinct from the bird’s alarm call for predators such as Blue Jays, which prey on their eggs, and are specifically meant to warn against Brown-headed Cowbirds, brood parasites that often target Yellow Warbler nests. When a female hears the call, she rushes back to the nest to prevent the cowbird from laying an egg.

Now, according to research published last month in Communications Biology, it turns out another species might also benefit from these seet calls: Red-winged Blackbirds who nest near Yellow Warblers. “We’ve known about the seet call of the Yellow Warbler,” says Mark Hauber, a behavioral ecologist at the University of Illinois at Urbana-Champaign and co-author of the study. “What we didn’t know was that another species understands the seet call and considers it to be a danger to itself, too.”

Although cowbirds trick more than 200 bird species into raising their young, only Yellow Warblers produce a specific warning call that signals a cowbird’s presence. And though research has shown that several species, including nuthatches and hornbills, eavesdrop on their neighbors’ conversations to gather intel on predators or good feeding spots, this is the first report of one species recognizing another's brood parasite warning. This ability might help Red-wingeds in their own defenses against cowbirds, the researchers say.

Hauber and his colleagues conducted their research in central Illinois, where breeding Yellow Warblers, Red-winged Blackbirds, and Brown-headed Cowbirds overlap between April and June. For the first experiment, they placed speakers in nesting Yellow Warbler territory. Using playback of five different bird recordings—the warbler’s seet, the warbler’s general chip alarm call, cowbird calls, predatory Blue Jay calls, and a non-threatening Wood Thrush call—the researchers found that Red-wingeds appeared near the speaker while raising their own alarm calls in response to almost half of the seet calls. Other birds showed up only a couple of times for the seet calls. Meanwhile, the Red-wingeds turned up far less frequently for all the other calls.

For Shelby Lawson, a doctoral candidate in evolutionary ecology at the University of Illinois at Urbana-Champaign and lead author of the study, the more frequent appearances by the Red-winged Blackbirds made it clear that they had an ear for the warning calls. To further test out this idea, her team then set up another playback experiment in Red-winged nesting territory to see if the birds expressed similar signs of defense and aggression when hearing the seet calls, cowbird calls, Blue Jay calls, and the calls of other Red-winged Blackbirds, which can mean an intruder.

The researchers found that Red-winged males and egg-laying or incubating females almost immediately stopped their normal activity and sounded alarm calls or approached the playback speakers in response to Yellow Warbler seet calls and cowbird calls. But Red-wingeds also exhibited similar or slightly more aggressive behavior when the speakers played Blue Jay calls and other Red-wing calls, respectively. This indicated to the team that the Red-wingeds took the Yellow Warbler’s warning call to be as much of a concern as other common threats like predators or competition.

“It is super clear that they [Red-wingeds] understand the seet call to be some sort of alarm call or warning,” Lawson says, and “other birds aren’t responding similarly to these calls.”

What’s still not clear, however, is if the Red-wingeds take the seet calls to specifically mean a cowbird is present. To find that out, Lawson’s team will need to repeat the same experiment when the chicks hatch. At that point, cowbirds would no longer be a threat, and the Red-wingeds shouldn't react to the cowbird or seet calls.

Whether the Red-winged Blackbirds' eavesdropping skills actually translate to lowered brood parasitism also remains an unknown. Steve Rothstein, a behavioral ecologist at the University of Santa Barbara who wasn’t involved in the study, thinks that the benefits, if any, may be small. “You could make it more difficult for cowbirds to monitor the host nest, but cowbirds are often able to overcome this host aggression,” he says. In other words, if a cowbird wants to sneak into a nest, it usually finds a way.

Although questions linger, the connection between Red-winged Blackbirds and the Yellow Warbler’s seet call appears clear. So if you get the chance this spring to watch a Yellow Warbler flitting about, pay extra attention to its calls and an eye out for nearby Red-wingeds. Who knows, you might get to witness a cowbird chase.