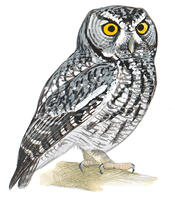 Sponsored by: Shorecrest Bed and Breakfast

About the Bird: A little owl with a distinctive voice, the Whiskered Screech-Owl lives mostly at high elevations in Arizona canyons, where they nest in the hollows of oaks and sycamores. Males sing to defend their territory and mating pairs call back and forth in duets. With 3 degrees of warming, which the world is on pace to reach by 2080, they would lose 28 percent of their summer range and likely no longer breed in the United States. The effect on the species' winter range is projected to be more dire—a loss of 85 percent throughout their habitat in Mexico.

About the Artist: Snoeman is a New York City–based artist with roots in graffiti. He works in a wide range of mediums with a focus on aerosol murals and mixed media illustration. Inspired by the city, he has become known for his gritty aesthetic and raw depictions of quintessential New York people, places, and things. His work can be seen in one form or another in cities around the world.