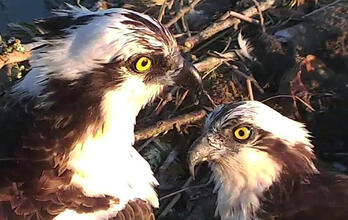 Rachel and Steve, America’s most famous Osprey couple, have laid their three eggs for the year, meaning that explore.org viewers will soon be able to watch their chicks grow into stunning adult birds.

That is . . . if nature plays along. These chicks will face a lot of dangers as they age, and though watching their nest cam—or any of the other wild bird cams out there—can be addicting, it can also be upsetting to see nature run its course in real-time. These are a few twists to look out for while tuning into the lives of baby birds of prey.

Over the last few months, millions of people watching the the Bald Eagle cam at the National Arboretum in Washington, D.C. got a taste of the fierce competition between raptor nestlings. One eaglet was born a few days before its sibling, and was thus noticeably bigger (a common pattern in most raptor species, including Ospreys.) In the first few weeks, it seemed like the firstborn was getting fed more than the younger sibling. Nest cam viewers were worried.

But it turns out that the chicks are perfectly fine: Both have grown to be healthy eaglets who now look more like mini adults than chicks. Sibling rivalry is just something most raptor nests have to endure. Since many birds of prey don’t drop their eggs all at once—they usually wait two or three days between layings—the chicks don’t hatch together, and the first egg tends to give rise to the biggest and strongest of the brood.

“I think there’s always some form of sibling rivalry,” says Dianna Flynt, the rehabilitation supervisor at the Audubon Center for Birds of Prey in Florida. “There has to be, because the stronger, older bird is going to be more aggressive when it comes to surviving. But sometimes, it’s very severe.”

For instance, an eagle chick can end up pecking its sibling to the point that it’s too weak to beg for food; other times, it will simply crowd out the younger one during feeding time. It's just the way life goes in an eagle nest, says Al Cecere, founder of the American Eagle Foundation, the nonprofit that’s running the Arboretum cam. If there’s plenty of food to go around—the happy case with the D.C. eagle family—the younger eaglet will soon catch up in size and strength.

Dining Out (of the Ordinary)

Food availability plays a huge factor in whether all the chicks in a raptor nest survive, Flynt says; it all depends on the natural ebb and flow of the ecosystems, as well as weather and other environmental factors.

But even if there’s enough food to go around, viewers may not want to see exactly what eagles and other birds of prey bring back to the nest. Last week, people checking in on the Audubon Society of Western Pennsylvania's (ASWP) Bald Eagle cam received a bit of a shock when a parent brought a dead cat back to the nest. Cats aren’t part of a Bald Eagle’s typical diet: They generally dine on fish and, depending on where they live, birds such as geese and gulls. Mammals are a rare culinary choice for them, and when they do eat one, it’s often already dead.

As ASWP said in a statement, “nature isn't always kind or pretty.”

From Predator to Prey

Raptors may be at the top of the food chain, but it takes some time (and a lot of growing) for them to get there. A chick meeting its tragic end is likely the most jarring thing that can happen on a live feed. Last year, a Bald Eagle snatched both of Rachel and Steve’s chicks from the nest, just moments after the Osprey parents had flown away. That’s a hard truth for nest-cam viewers: Eggs and baby birds are always at the mercy of the food chain. Adult birds of prey will pick up chicks from the nest, while raccoons and ravens will try to steal eggs for a quick meal.

And those are just the natural predators. Eagles feasting on carrion left behind by hunters can get lead poisoning from the bullets left in the animal. Or they can fly into power lines or get hit by buses or cars. If these tragedies happen during nesting season, it could leave chicks without parents to feed them.

But just because nest cams are unpredictable, doesn’t mean they should be avoided. The incidents mentioned above are dwarfed by the more blissful moments, and it’s fun to watch fuzzy, helpless chicks grow into awkward teenagers, and then full-fledged, regal birds of prey. Plus the cams are great educational tools, Flynt says. “It’s an opportunity to educate about nature and the process. There will be those who survive and those who don’t survive. But it’s all about learning.”