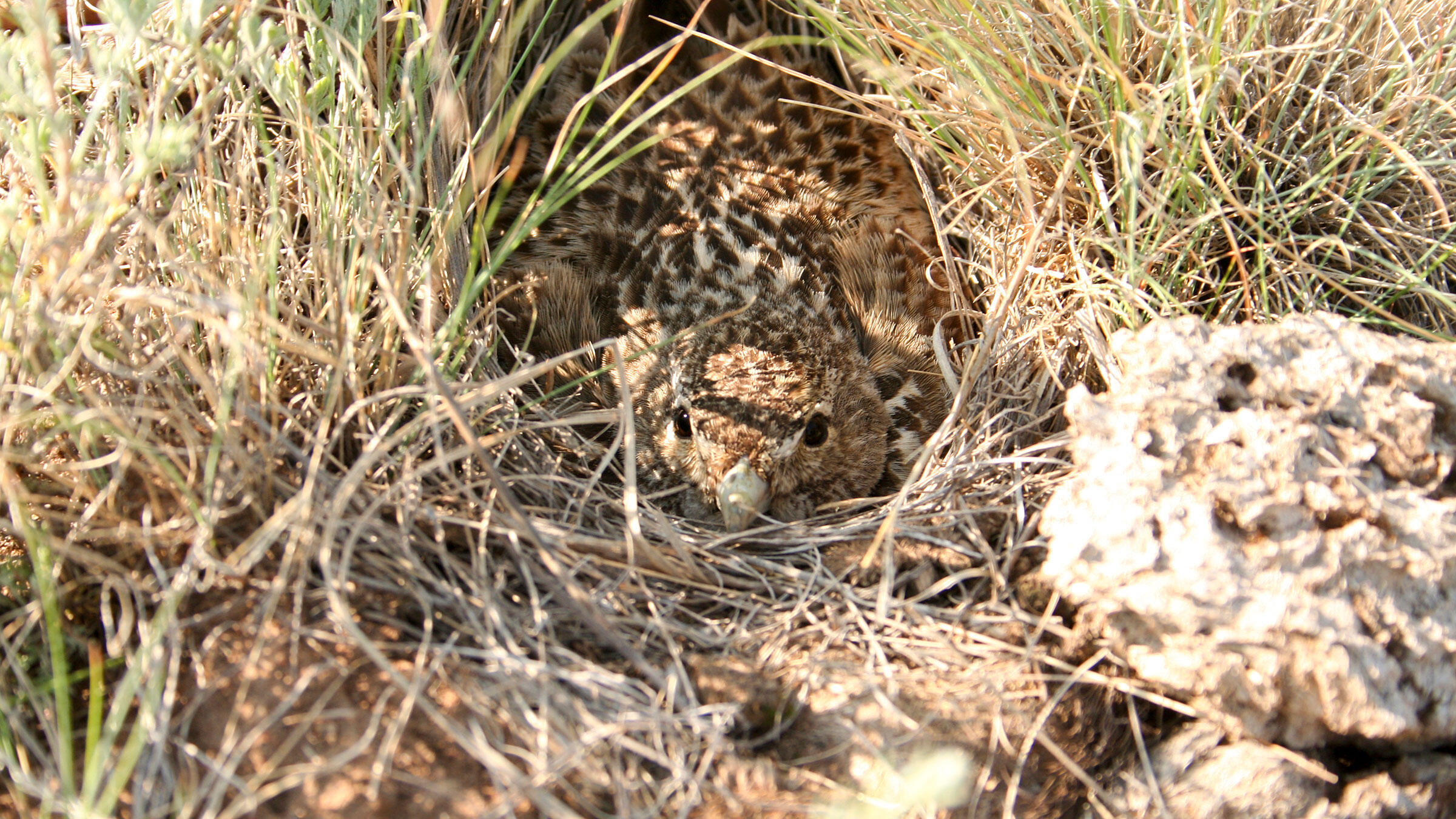 Female larks borrow dung from grazing animals to create a force field around their nests.

A few years ago, ecologist Johannes Kamp was on the Kazakh steppe studying the breeding ecology of the Black Lark. While searching for the birds’ nests in the high grass, he realized that all he had to do was flush the females out and look for nearby animal dung. Wherever there was horse or cattle dung that looked slightly “arranged,” he usually found a nest.

This wasn’t just coincidence. Kamp observed female larks carrying dung in their bills, sometimes fetching more than a hundred pieces over the course of a few days, and arranging them in rings around their nests. “They arrange the dung so orderly and in such a nice shape that it really looks like pavement, as you would lay at your front door,” says Kamp’s collaborator, ecologist Thijs Fijen.

Lots of birds add odd items to their nests. Bowerbirds are known for using sticks, berries, and even coins as decorations to attract mates, for example, and urban sparrows and finches work cigarette butts into their nests to ward off parasites. Dung seemed like an odd choice of building material, though, and a costly one. Finding the dung and constructing the rings takes time and effort, leaving the larks exposed to predators.

Fijen and Kamp suspected there must be some benefit to the dung “pavements” to justify those costs. So, with a team of researchers from Europe and Kazakhstan, they returned to the steppe to figure out what it was.

To test various theories, the team staked out 220 Black Larks, some in untouched steppe habitat and others in the meadows and fields of former Soviet wheat farms, now grazed by horses, sheep, and cattle from a nearby village.

First, they thought the dung pavements might deter predators by camouflaging the nest or masking the birds’ scent, so they monitored nest survival and predation rates. But they also thought the dung might protect the nests not from predators, but from livestock. Previous studies of Black Larks found that most nest failures were due to trampling, and livestock are a known hazard for other ground-breeding birds.

To test the anti-trampling hypothesis, the researchers collected soil from a river near the village and made clay “cookies” that would break when stepped on to take the place of real nests. They baked the clay in the sun on the hood of their car and then laid them out in a field, surrounding half of them with dung pavements and leaving the rest bare. They then borrowed a herd of cattle from a local shepherd and led them into the field to graze.

The researchers found that actual lark nests were preyed upon at similar rates, regardless of the size or presence of pavements—the dung didn’t seem to hide the nests. It did, however, keep the nests from getting trampled. The cattle were careful about not stepping in their own waste, so the researchers’ clay nests were less likely to get broken when surrounded by dung. What’s more, Black Larks seem to adjust the size of the pavements to their perceived trampling risk—where there were more grazers, the researchers found larger pavements.

The researchers also tested a third theory: To see if the dung helps regulate the temperature of the nests, they constructed artificial nests with data loggers inside. They found larger pavements provide greater insulation, keeping the nests warmer at night and cooler during the day. As a result, larks might be able to forage for longer without their offspring becoming too hot or too cold, the researchers think, leading to more food and faster chick growth. In the field, they did find some evidence to support that: Chicks from nests with larger pavements tended to grow faster.

For now, the researchers aren’t sure which benefit drives the dung engineering. Other lark species build similar, though smaller, structures from stones to regulate temperature. The dung pavements might be the steppe version of these.

“The environment of Black Larks consists of grass, grazers, dung, and little else, so it seems plausible that Black Larks or their ancestors initially used dung to fulfill the role of the stone ramparts of related species,” the team writes in a study published in The Auk this past fall. The fact that the pavements also protected the nests from trampling would have been fortuitous, spurring the birds to build larger structures.

On the other hand, it’s possible that the pavements developed in response to changing land use on the steppe and the increased risk of trampling that came with it. As the Soviet Union began to use the steppe for farming and grazing, pavement building might have evolved as a defense. Although livestock numbers have since dropped, the larks might continue it because it serves the additional purpose of temperature control.

Either way, it’s clear that dung is beneficial, even necessary, for the birds. “I think the grazers are essential to Black Larks to survive,” Fijen says. But there’s a balance to strike. There seems to be an optimal grazer density that the larks seek out; Fijen says the birds avoid areas with too many or too few. Black Larks need some, well, bullshit to get by—but not too much.