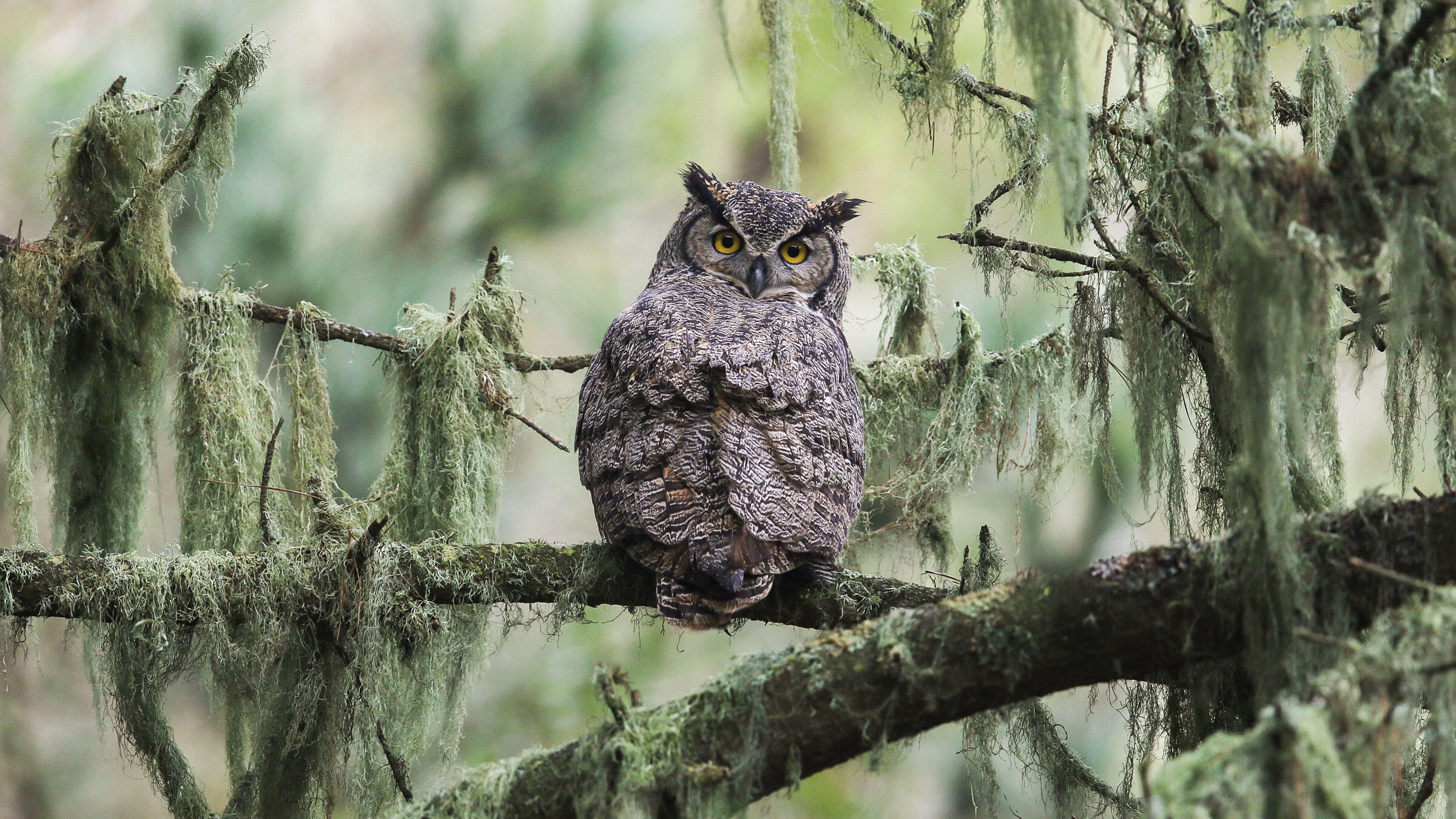 As he sat waiting for sunset one evening in Point Reyes National Seashore, Daniel Dietrich saw something move out of the corner of his eye—a Great Horned Owl. Instead of moving toward the bird, he moved away from it and up a hill. His goals: avoid flushing the bird, become eye level with it, and capture more of the beautiful lichen-drenched tree it perched in. Photo: Daniel Dietrich

Why Closer Is Not Always Better When Photographing Birds

The impulse to shoot your subject at close range can be powerful, but there are several reasons why that's not best for the animal—or the image.

I didn’t see my first owl in the wild until I was an adult. Owls had always been this sort of mythical creature for me. Perhaps I wasn’t supposed to see them. It seemed they only became visible when my eyes were closed, and they would vanish into thin air when I opened them.

One of the first opportunities I had to photograph an owl had an immediate and long-term impact on me. I was out hiking early one morning and noticed a large bird fly between two trees, then land not too far from where I was standing. I raised my binoculars and saw that it was a Great Horned Owl. I was off-the-charts excited. I immediately ran back to my car to retrieve my camera. Then I set up my tripod, connected the camera, checked the battery and memory card, and set off to photograph this elusive bird of prey.

The owl was still on its perch when I returned. I slowly weaved through the brush to get into the best position to photograph the bird. As I reached the optimal spot, the owl flew from its perch into the open air above a treeless field. In the blink of an eye a dozen ravens launched their assault. They drove the owl at a staggering pace, pulling at its tail feathers during the pursuit. They dove at it from above and below and from both sides as the owl hastened its retreat.

I stood mortified. Did I just do that? Did I flush that owl from its perch and subject it to that relentless attack from an unkindness of ravens? I swallowed hard.

In the ensuing years, I learned a great deal from experiences like this—not just with birds, but with bobcats, elk, and many other creatures I love to photograph. The number one lesson has been: Closer is not always better. 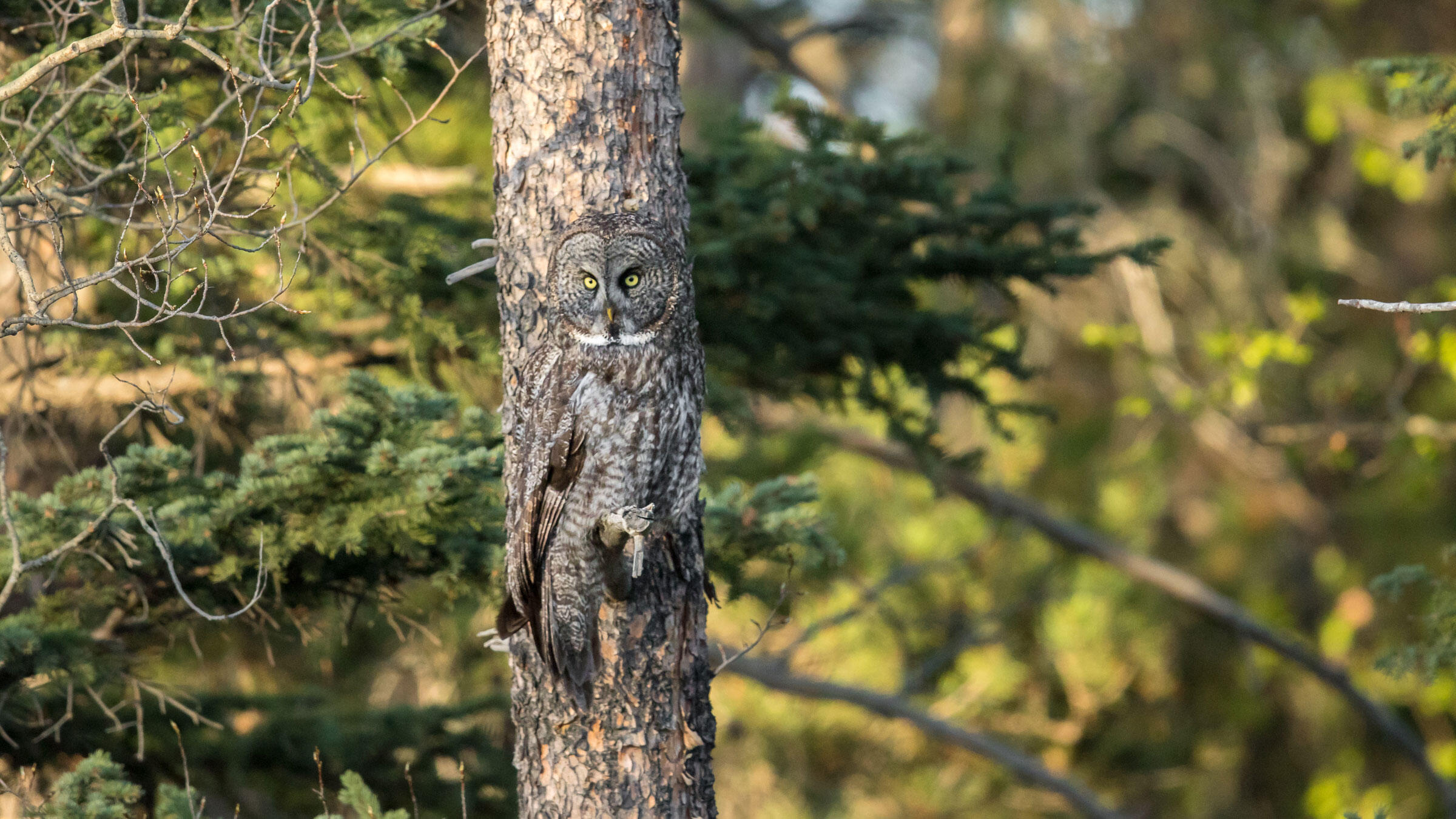 Great Gray Owls are masters of camouflage: They blend in perfectly with the trees they hunt from—an adaptation that makes for a powerful image. Dietrich found this Great Gray Owl by sitting and watching for movement as it flew from perch to perch. Photo: Daniel Dietrich

On that morning with the Great Horned Owl, my selfishness not only blew my shot, but it had a profound impact on my subject. Owls are night hunters. They rest during the day. They need to rest during the day. My approach caused the bird stress and resulted in it needlessly expending energy it requires for survival. What if this was a female on a nest?

This past summer I was watching a Great Horned Owl nest from about 100 yards away with my scope. A gentleman parked his car not far from mine, exited with his camera, and walked directly under the nest to get a shot. The female owl grew increasingly nervous as he approached. When the shutter started clicking, the mother flew from the nest to a nearby telephone pole, exposing her helpless chick to predators.

Observing wildlife from a distance not only best serves birds' interests, but it can provide big benefits to our photography. What we gain most is knowledge. By watching our subjects for extended periods of time we are able to learn patterns in their behavior. Understanding these patterns allows us to best determine where we can place ourselves to have the least amount of impact on our subjects and where we have the best opportunity to capture the desired behavior.

In the many hours I spent watching these Great Horned Owls without my camera, I gained a tremendous amount of knowledge. I learned where the pair hunted. I learned the favorite perches they hunted from. I was able to determine the direction they were most likely to fly after capturing their prey. I learned that often the male would cache food for a nesting female in nearby branches. I then could be immediately ready to shoot when I saw the female leave the nest, knowing she’d jump back in with a rodent in her mouth before setting it in the nest to feed her chicks. This knowledge provides us with opportunities to capture more unique moments in nature, rather than just odd angle shots from below a nest.

Patience also sometimes rewards us with the heavily desired close-up images. For example, Great Gray Owls that I have photographed like to hunt along roadsides. They perch on low branches or fence posts and listen intently for rodents. If they don’t detect prey in a short amount of time, they launch and fly parallel to the road to a new perch where they start the process over again. If you remain still, their hunting pattern may very well cross right in front of you. I have had this happen several times and have been able to capture both in-flight shots as well as successful hunts at very close range. 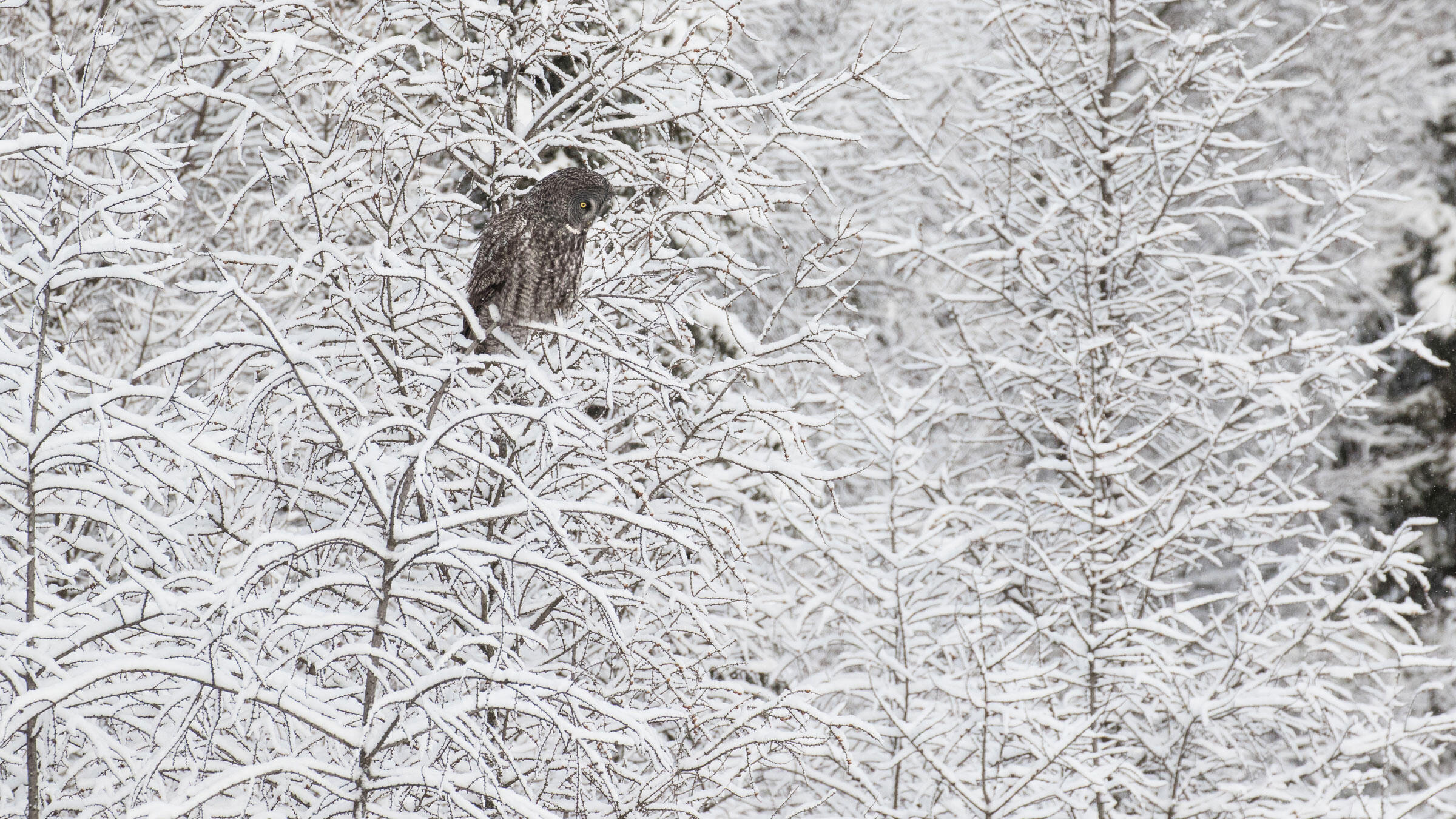 While out searching for Great Gray Owls one winter evening, Dietrich found this individual perched a fair distance away. Instead of moving closer he waited, and the bird flew toward him. He captured this shot as the owl sat listening for a meal. When it eventually flew toward him again, he photographed the owl successfully hunting at very close range. Photo: Daniel Dietrich

And while close-up images of owls are exciting, shots that showcase subjects in their natural environment can be even more so. Showing an owl perched in a lichen-covered tree, or in perfect camouflage with the surrounding forest, can create stunning photography. It also enables viewers to understand the types of environments birds live in, which can help inspire conservation efforts. There are many photographers who have found incredible success focusing strictly on these ‘animalscape’ images.

We can have a profound impact on the subjects we photograph in nature. The urge to get close will always be there. In some cases these images feel rewarding when we capture them. But it isn’t always better. Consider taking a step back instead of forward. Consider the well-being of your subject first. Consider watching your subject to glean greater understanding of its behaviors, so that you can capture more unique images later. And consider if an environmental shot showcasing your subject is better for both your photography and the animal.

Daniel Dietrich is a full-time wildlife photographer and owner of Point Reyes Safaris.