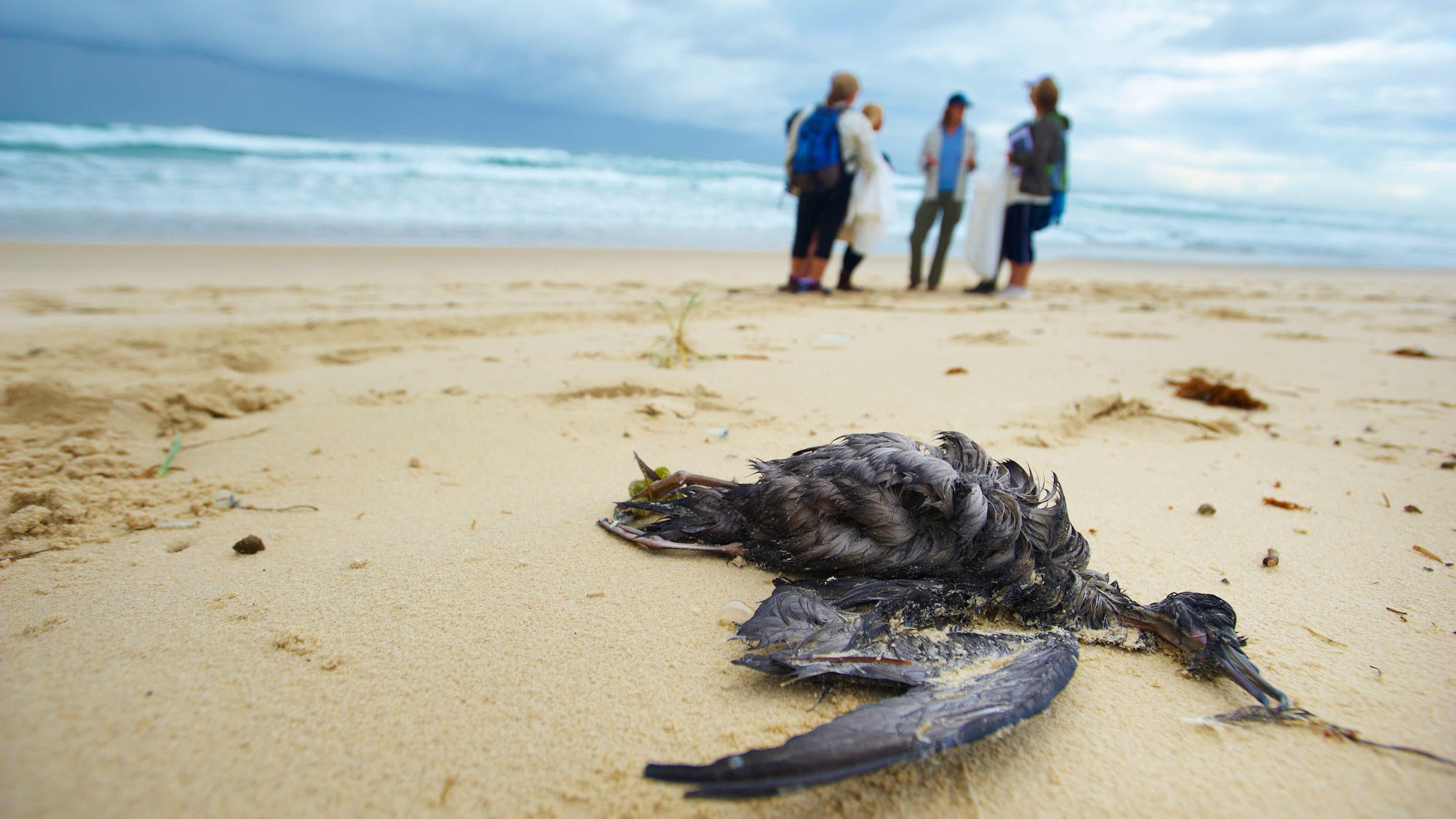 Plastic fragments are eaten by a substantial number of seabirds, including this Short-tailed Shearwater. Photo: CSIRO

It’s a gruesome scene: the carcass of a shearwater washed up on the beach, having starved to death with a stomach full of plastic trash. Unfortunately, that scene’s become increasingly common. It’s estimated that eight million tons of plastic are dumped into the ocean every year, and despite its lack of flavor or nutritional content, many seabirds confuse this plastic with food. Around 60 percent of the world’s seabirds species eat plastic, according to one estimate—a number so large it suggests the birds actually pursue the floating bits. But do they?

New research suggests so. According to a study published today in Science Advances, these birds aren’t gorging on plastic indiscriminately or by mistake. Instead, senses honed by evolution to lead them to the best foraging opportunities are betraying the birds. It turns out that, if you’re a seabird, plastic actually smells like dinner.

When phytoplankton are being eaten by zooplankton, they produce a sulfurous-smelling chemical called dimethyl sulfide, or DMS. Not all seabirds can smell DMS, but some species that specialize in eating zooplankton such as krill use its odor as a way to locate potential meals.

Matthew Savoca, the University of California, Davis graduate student who led the new study along with his advisor Gabrielle Nevitt, remembers the lightbulb moment when they realized that this ability could be leading birds astray. “I was a first-year Ph.D. student and looking for a project to work on, and I was just looking at some data on seabird plastic ingestion, talking with Gabby about how sad it is,” he says. “I forget who said it first, but we thought, hey, I wonder if they can smell the plastic. It was such an interesting idea, and we realized it just might work.”

Plastic doesn’t start out smelling like plankton. But as a piece of plastic debris spends time floating in the ocean, its surface may be colonized by DMS-producing algae and bacteria. Over time, Savoca and Nevitt speculated, the “biofilm” living on the plastic may produce enough of the chemical to confuse foraging birds.

To measure whether the plastic produces enough odor to attract birds, Savoca and his colleagues started by submerging mesh bags of plastic beads in seawater off the shore of California for a month. When they retrieved them, they took them to a lab operated by the university’s Department of Viticulture and Enology that has special equipment to detect volatile sulfur compounds. Every single sample, including all three of the common types of plastic they tested, was producing significant amounts of DMS after only a month in the ocean.

The next step was to confirm that being able to smell DMS made birds more likely to eat plastic. Looking at data from 55 studies of 25 different species of tube-nosed seabirds, such as Blue Petrels, Short-tailed Shearwaters, and Sooty Shearwaters, the pattern was obvious: Species that are responsive to DMS ingest plastic five times as often as those that aren’t.

Determining whether a particular seabird species is responsive to DMS takes a lot of work, but luckily evolution has provided a shortcut: DMS-responsive species tend to be those that nest in burrows. “These birds have a nestling period that lasts months or even in some species close to a year, so for a very, very long time they’re developing underground, in almost complete darkness where there are no visual cues,” Savoca says. “The olfactory information they have is vast, while they have a nearly total absence of visual information, so the olfactory regions of their brains really proliferate tremendously.”

Savoca hopes that uncovering this connection will spur efforts to keep a closer watch on the seabird species most vulnerable to plastic ingestion. “Often burrow nesters are not well monitored for this problem, because they’re rare and hard to find,” he says. “But what this study shows is that we should actually put more effort toward monitoring those species, because they seem to be at greater threat.”

But just paying more attention to prone species isn't enough. Preventative measures should also be taken. According to Anne Gaskett and Megan Friesen of The University of Auckland, authors of a recent review on sensory-based strategies for seabird conservation, Savoca's study "shows us that the seemingly vast problem of plastic pollution is one we can tackle.” As such, Savoca would also like to see his research encourage materials scientists to take up the challenge of creating new types of plastic with surfaces less hospitable to DMS-producing algae and bacteria. This is a man-made problem, after all, so it's on us to come up with a solution.