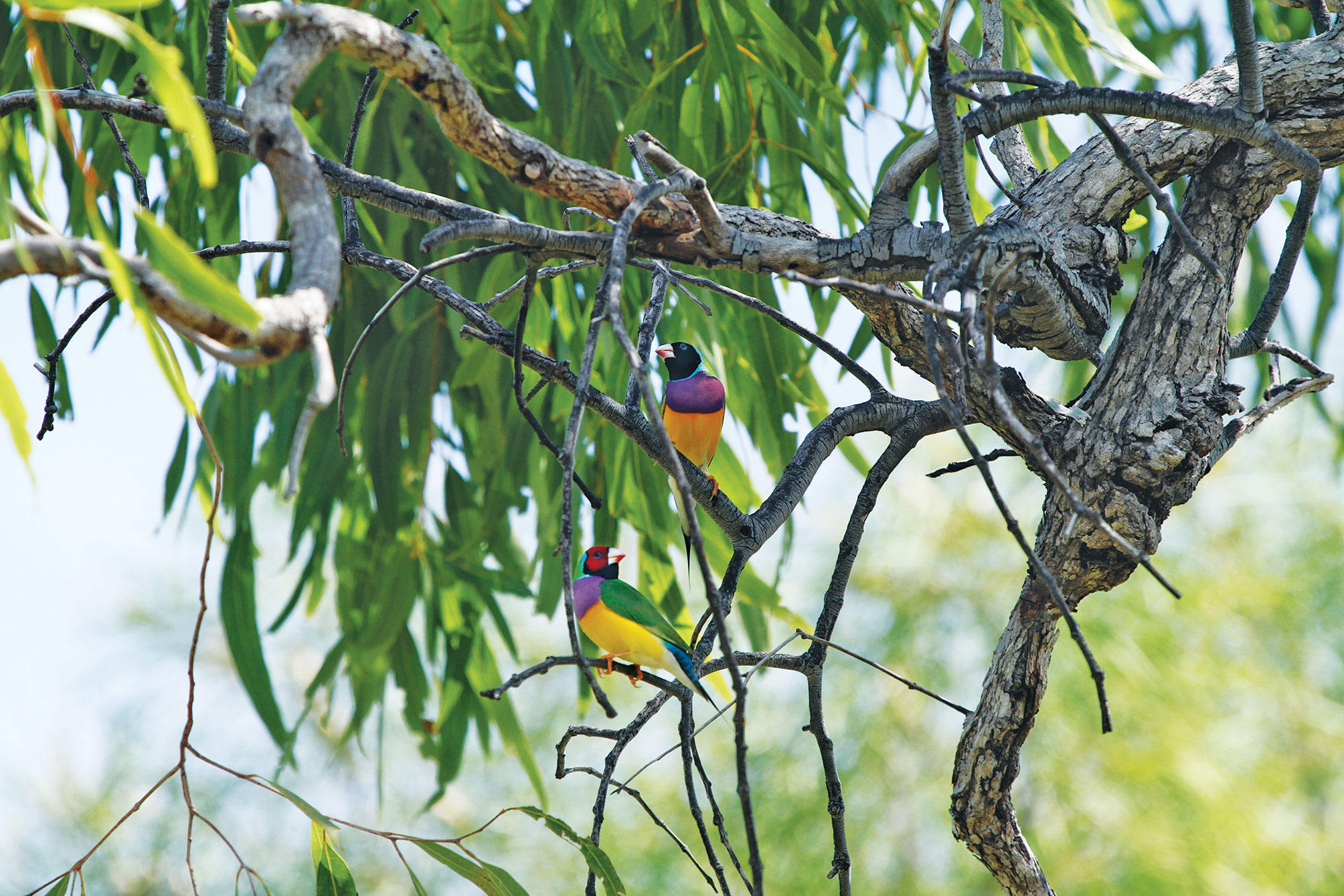 A new burn program led by Kija rangers is helping bring back the beloved birds while delivering hope to an impoverished community.

Tiny, rare, and rich in color, Gouldian Finches are called “jewels of the outback”  for good reason.

With just under 2,500 remaining in the wild, the once-common Australian bird is a stunning sight—for anyone so lucky to find it. The birds’ range is largely bound to the Kimberley, a spectacularly rugged region that marks Australia’s last frontier. From April to October, the area experiences a naturally dry season that culminates in ferocious late-season fires, wiping out flora and essential habitat. Fires have always been around in the Kimberley, but never at this scale or frequency.

Historically, Aboriginal tribes set small, prescribed burns to prevent late-season wildfires around their homes. But when European colonists displaced the tribes in the early 20th century that practice died out, and eventually infernos began to regularly decimate the entire landscape. Many seed-dependent birds starved in these barren savannas—especially Gouldian Finches, which rely on spinifex, a seed that grows solely in areas that have been untouched by fire for at least three years. The late-season fires also wiped out shrubs and hollow trees, leaving the birds with nowhere to hide from feral cats and other predators.

In 2013, British ecologist Alexander Watson learned that Aboriginal Kija park rangers had created a prescriptive burning plan for the Kimberley but lacked the money and equipment to put it to use. Watson realized the plan could give the finches a fighting chance. So he and the rangers launched the Fire and Feathers program, funded by the Australian government and various conservation groups, which hires indigenous-owned fire stations to set small, controlled burns early in the dry season around six populations of Gouldians. The rangers first burn the bush by dropping incendiaries out of choppers along a pre-arranged route. They then follow up on foot, sweeping the ground with grip torches to get a more precise burn. The rangers also monitor the finches by installing cameras in their breeding area.

The rangers first burn the bush by dropping incendiaries out of choppers. They then follow up on foot, sweeping the ground with grip torches to get a more precise burn.

After just three years the project has already seen tangible success. Though the rangers won’t have concrete population data until later this fall, they say Gouldian sightings have been on the rise. “This is one of the rare cases where we saw a problem, we did something about it, and the birds are coming back,” says Kira Andrews, a project supervisor from the nonprofit group Rangelands.

Watson’s next target is to quadruple the project’s range to 60,000 square kilometers, covering almost all of Kija country. “The rangers aren’t just protecting finches,” he says. “They’re protecting assets like towns and reservations. They’re protecting roads and a whole range of things their community depends on.”

Aboriginal groups like the Kija make up 40 percent of the Kimberley’s population, but have very few resources to subsist on. These groups experience extremely high levels of poverty, unemployment, and suicide. In this way, the fires represent a lifeline for the Kija. The program not only restores their land, but also trains them for jobs in threatened-species management and open up career opportunities for the communities. And the Kija are not alone; many tribes across Australia have struck conservation partnerships with nonprofits to preserve local wildlife. The Olkola people, for example, are surveying endangered Golden-shouldered Parrot nest sites, while the Gumbaynggirr people are stewarding a habitat reserve for Wedge-tailed Shearwaters on Muttonbird Island. The locals know that if the birds recover, so too will their connection to the land.

Rising from the Ashes

The fairy-wren nests in river grass, which doesn’t burn easily. In the dry season, however, wildfires wipe out entire patches of the songbird’s habitat. After a controlled fire, the grass grows back far more quickly.

The crimson-faced Partridge Pigeon nests on the ground. Late-season blazes can reduce plant cover, making the birds and their young more susceptible to predators, such as dingoes and feral cats.

An endangered desert marsupial, the bilby is mostly ears and snout. It prefers open country with a patchy mixture of bare soil and grass clumps—a landscape best created by mosaic burns.