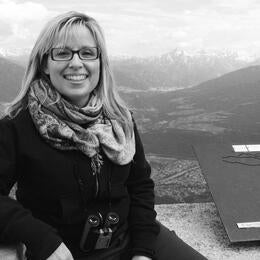 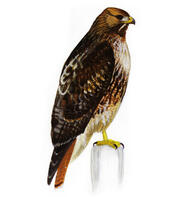 Red-tailed Hawks can be vexing birds. We tend to think of Northern Harriers and Rough-legged Hawks as hovering raptors, but Red-tails will also hover when the wind and occasion calls for it. They're bulky, all-purpose predators that primarily feed on mammals, but they're nimble enough to catch pigeons, too. They also vary in plumage based on age, range, and individual traits. You can have Red-tails with no belly band, Red-tails that are chocolate brown from head to toe, and even Red-tails without an actual red tail.

What can make all of these variables even more frustrating is that these birds are everywhere. In fact, Red-tails are so widespread and common that more often than not, when you see a raptor that you can't identify, chances are good it's a Red-Tailed Hawk. But how do you know for sure? Next time you're trying to figure out if you have a Red-tail, use these six basic questions to work your way through the ID.

Is the tail red?

Sure, it's obvious, but always check the tail. Most adult Red-tailed Hawks have a rusty-red upperside, though the lighting might affect how much of it you can see from below. Juvenile Red-tails often have brown tails crossed by darker horizontal bars, and in the West, many adults have some narrow barring on their red tails. The tails on the Harlan's subspecies are pale and mottled, and usually lack any sort of red.

Is the bird beefy?

Another great way to start is shape: Is the raptor in question hefty and sturdy looking? That helps you eliminate smaller, daintier raptors like falcons and Sharp-shinned and Cooper’s Hawks. Broad, beefy hawks are generally classified as Buteos, and the Red-tail is one of the beefiest.

Do the shoulders form a white V?

One of the best tips for IDing birds of prey is to look at their backs. Do any of the larger shoulder feathers (also known as scapulars) look white? If you notice a white V, that's a classic sign of a Red-tailed Hawk. But there are exceptions. Out west when young Swainson’s Hawks first return from spring migration, they, too, can have white patches. In those cases, look at the wingtips. Do the tips not quite extend down to the tail? Then it’s for sure a Red-tailed Hawk. If they do reach the end of the tail, it's a Swainson’s Hawk.

If you’ve asked yourself these questions and still aren’t convinced, keep going.

Is it wearing a dark bib?

Many raptors sport a dark bib, including young Bald Eagles and Broad-winged and Swainson’s Hawks. Red-tailed Hawks may have a dark belly band or be completely dark brown or blackish in the front, but they will never have a bib-like feature.

Red-tailed Hawks don't have feathers that go all the way down to their toes. With “booted” species, such as Ferruginous or Rough-legged Hawks, the color is so different from the breast that the bird looks like it's wearing pants, even when soaring.

Does it have the face of a Muppet?

If you've got a perched hawk, take a good, hard look at its face. Is the mouth huge with yellow in the corners? Does the beak look overly big for its face? If so, you've probably got yourself a Ferruginous Hawk, not a Red-tail.

So there it is. While we didn't hit on the really tricky Red-tail variations, like albinos and leucistics, keep these questions in mind the next time you think you might have a Red-Tailed Hawk. Even if it doesn't turn out to be one, these same clues could still help you identify your mystery raptor.