The Strobel plateau is famous for its brutal and constant winds, like the ones stirring up the water in the background of this picture. Hooded Grebes nest in the most sheltered area of the lake. Photo: Ugo Mellone

Guardians of the Grebes

To protect climate-threatened Hooded Grebes, volunteers camp out at remote, high-elevation lakes in Patagonia for the entire breeding season.

In 1974 a team of scientists trekking along the remote volcanic plateaus of southern Argentina made an unexpected discovery: a new species of grebe nesting on high-elevation lakes. In the short time since, the Hooded Grebe has become one of the most endangered birds in Patagonia. The divers breed exclusively on wind-battered lakes in the shadow of the Andes, where several factors are pushing them toward extinction.

In summer Hooded Grebes build floating nests atop beds of red watermilfoil on lakes fed largely by snowmelt. Climate change has led to drier conditions in Patagonia, making bodies of water that are suitable for nesting harder to come by. In the 1980s scientists estimated that more than 100 lakes on Patagonian plateaus served as breeding colonies for at least 5,000 Hooded Grebes. Today there are only 20 lakes on which scientists can regularly find the 800 remaining individuals, says Kini Roesler, conservation director at Aves Argentinas.

To help the species hang on, researchers and volunteers with the NGO and BirdLife International partner Aves Argentinas camp next to colonies for the entire breeding season, mid-October through mid-April, monitoring the birds from the time they perform their flamboyant mating dance through edging their young. The program, which includes predator removal and habitat protection, has helped prevent the population from dipping even lower, Roesler says.

When Italian photographer Ugo Mellone, who earned a Ph.D. in behavioral ecology and studied raptor migration, learned of the birds’ plight, he was captivated. “I started to pre- visualize the story I could tell,” he says, “the grebes and their behavior, the landscapes where they live, and all these people trying to save the species.” 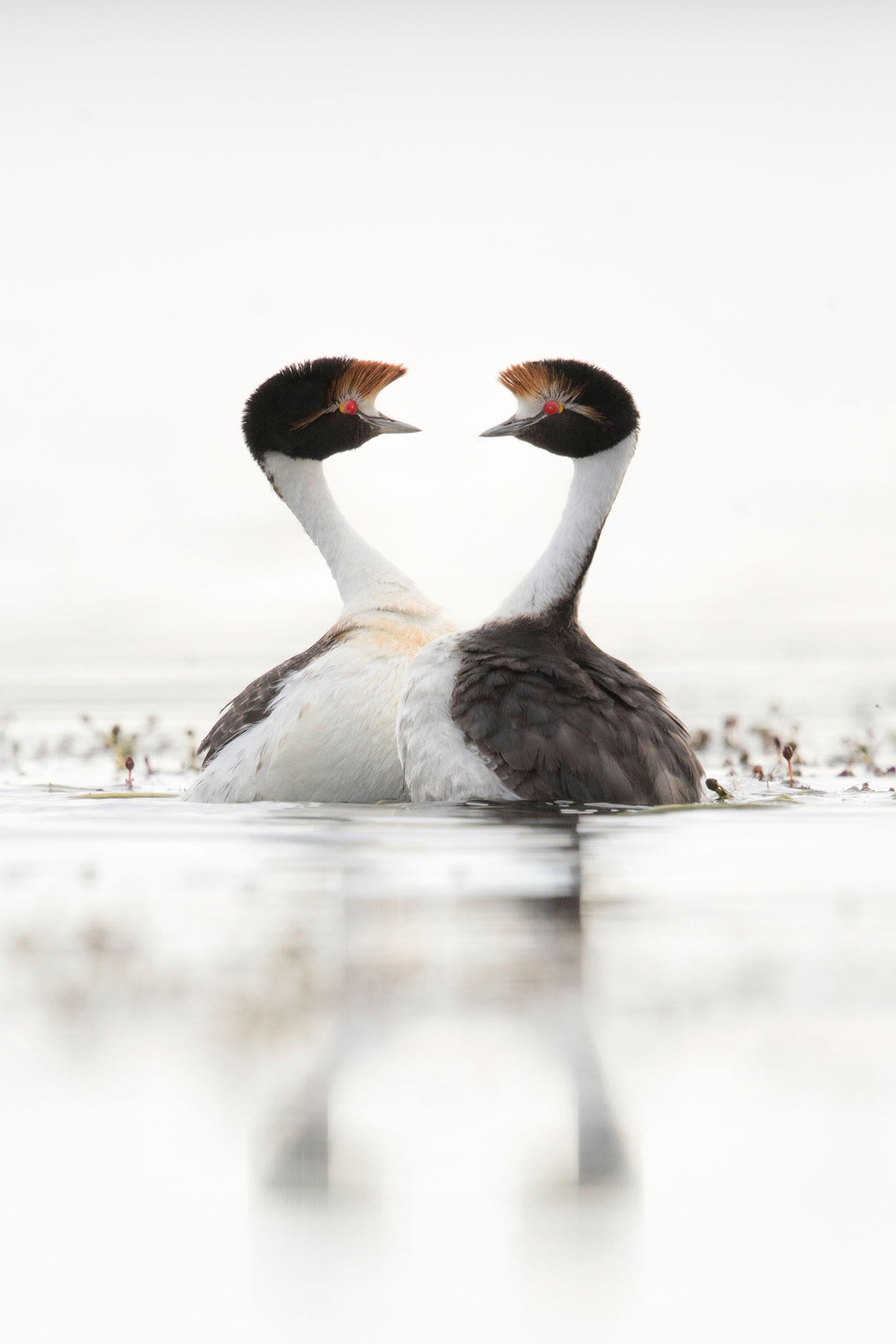 Hooded Grebes perform an elaborate mating display. At this moment in the ritual, the birds press their chests together and use their feet to rise up and skim across the surface of the water, shaking their heads in sync as they eye one another. At other moments, the birds press their chests together and swim in circles while whipping their necks back and forth in a reverse head-banging motion. 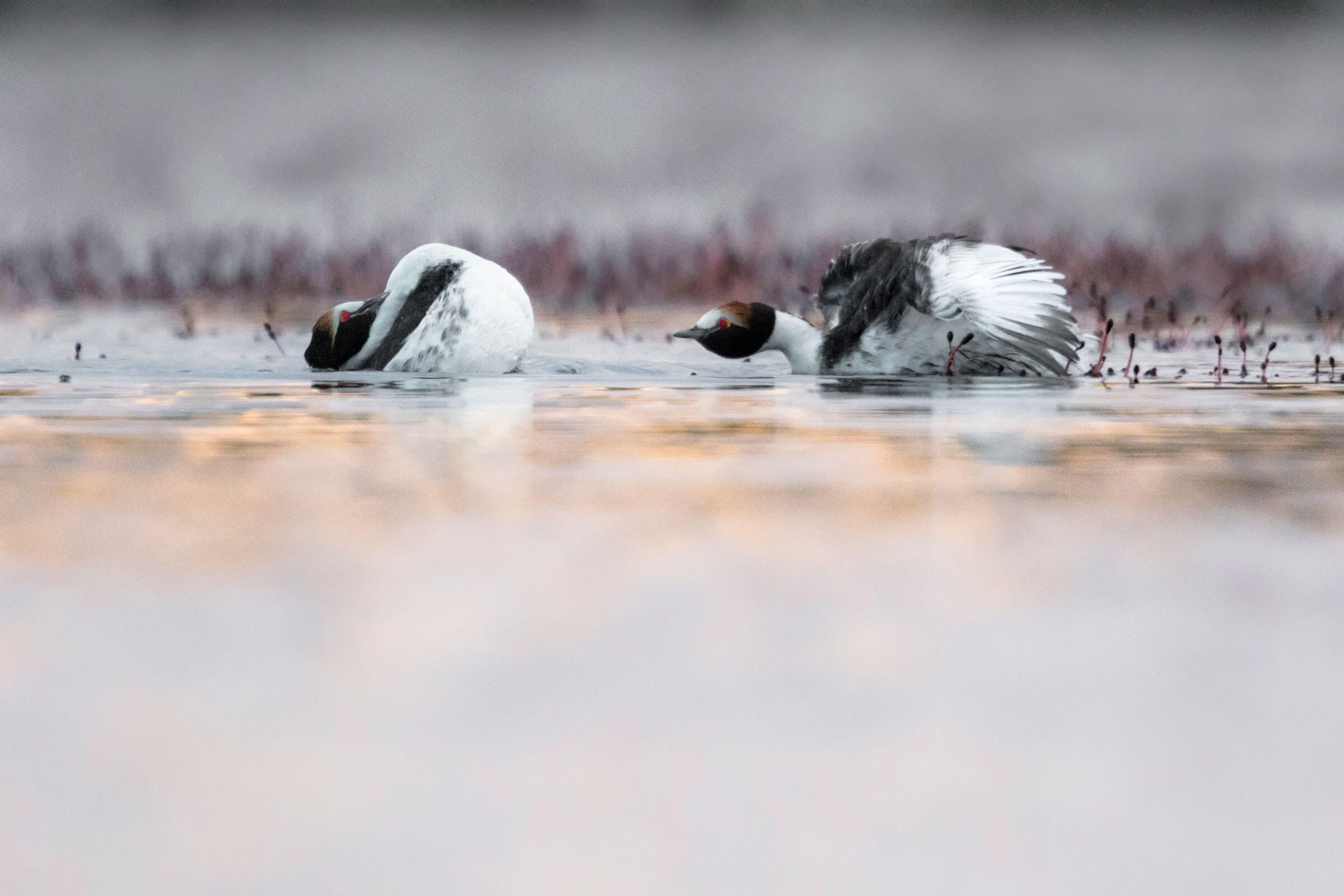 One of the challenges Mellone encountered when photographing these birds was capturing their fast dance movements in the low light of early morning and evening. Wind, waves, dust, white feathers, and the remote location all made for difficult photography conditions. Having many days in the field was critical to creating shots like this one. “I [could] spend all the time that I want to study light and behavior of the birds and try to do my best to get the best pictures,” he says.

Andrés de Miguel (left) collects abandoned eggs from Hooded Grebe nests as part of a captive-breeding effort to boost populations (adults typically abandon one of their eggs). The eggs are transported to a captive-breeding facility where they will be incubated until they hatch. Researchers are working to figure out how to raise these chicks in captivity and eventually release the critically endangered birds back into the wild. 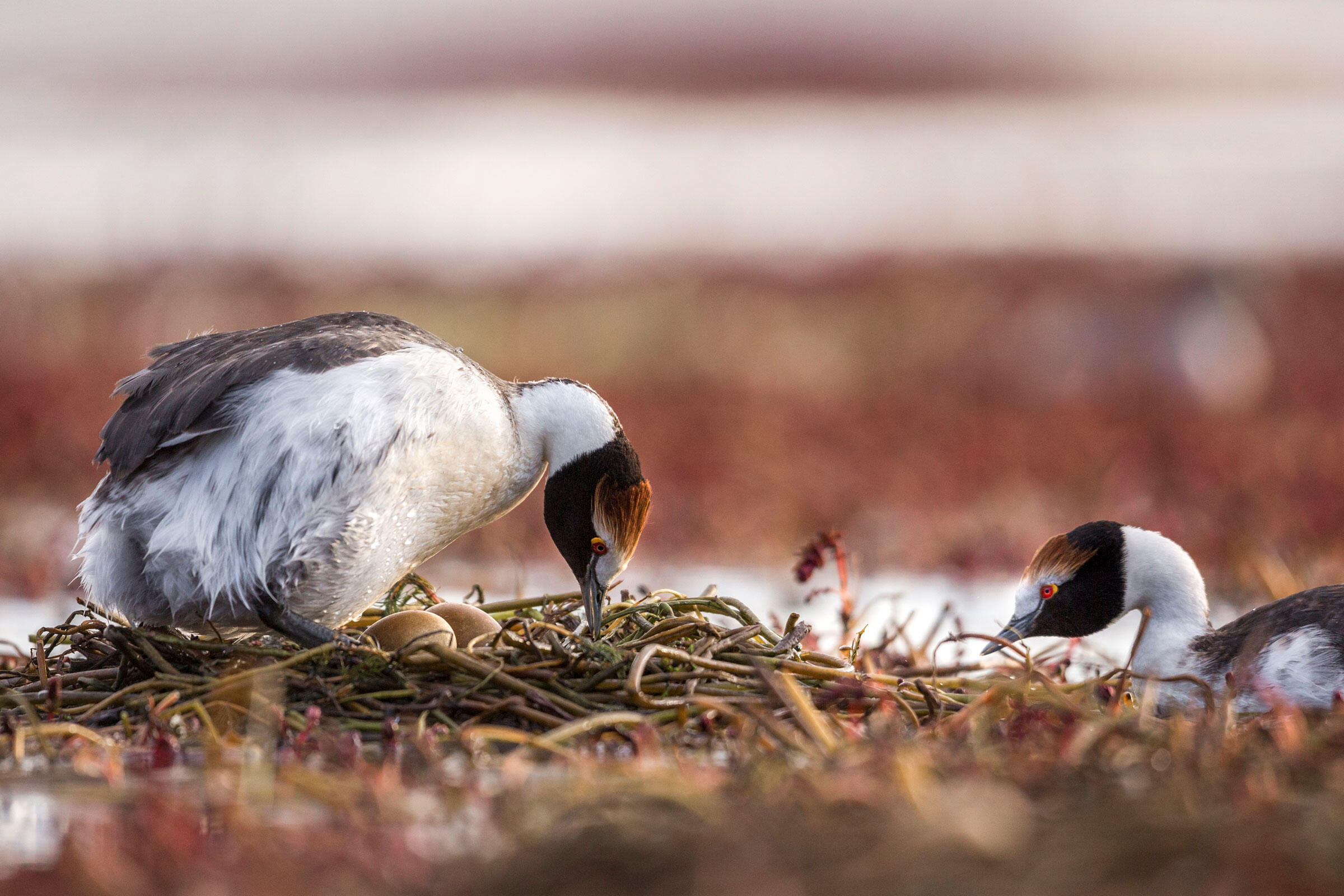 Once mated, the birds build their floating nests and typically lay two eggs. After the first one hatches, they abandon the second, unless both chicks break out in quick succession; in such instances, the parents raise both babies. Ninety-seven percent of the time grebes only raise one chick, Roesler says. 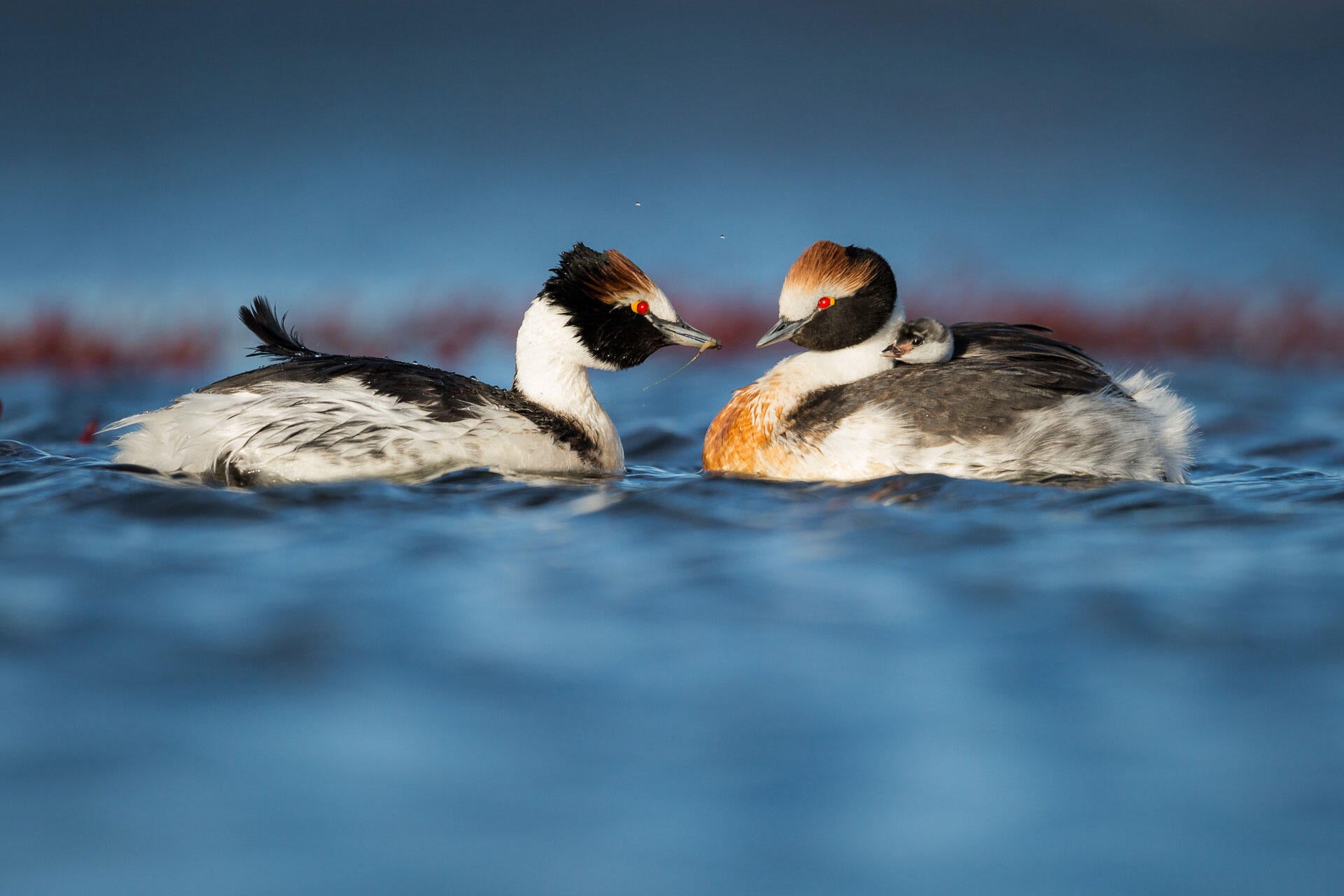 One parent carries a newly hatched chick on its back while the other dives for little shrimp-like crustaceans to feed to the youngster. Chicks spend the first three to four weeks of their lives hitching a ride on their parents’ backs. Hooded Grebes aren’t afraid of people, says Mellone, though he used a floating camouflage blind to avoid disturbing them while capturing this intimate family portrait. 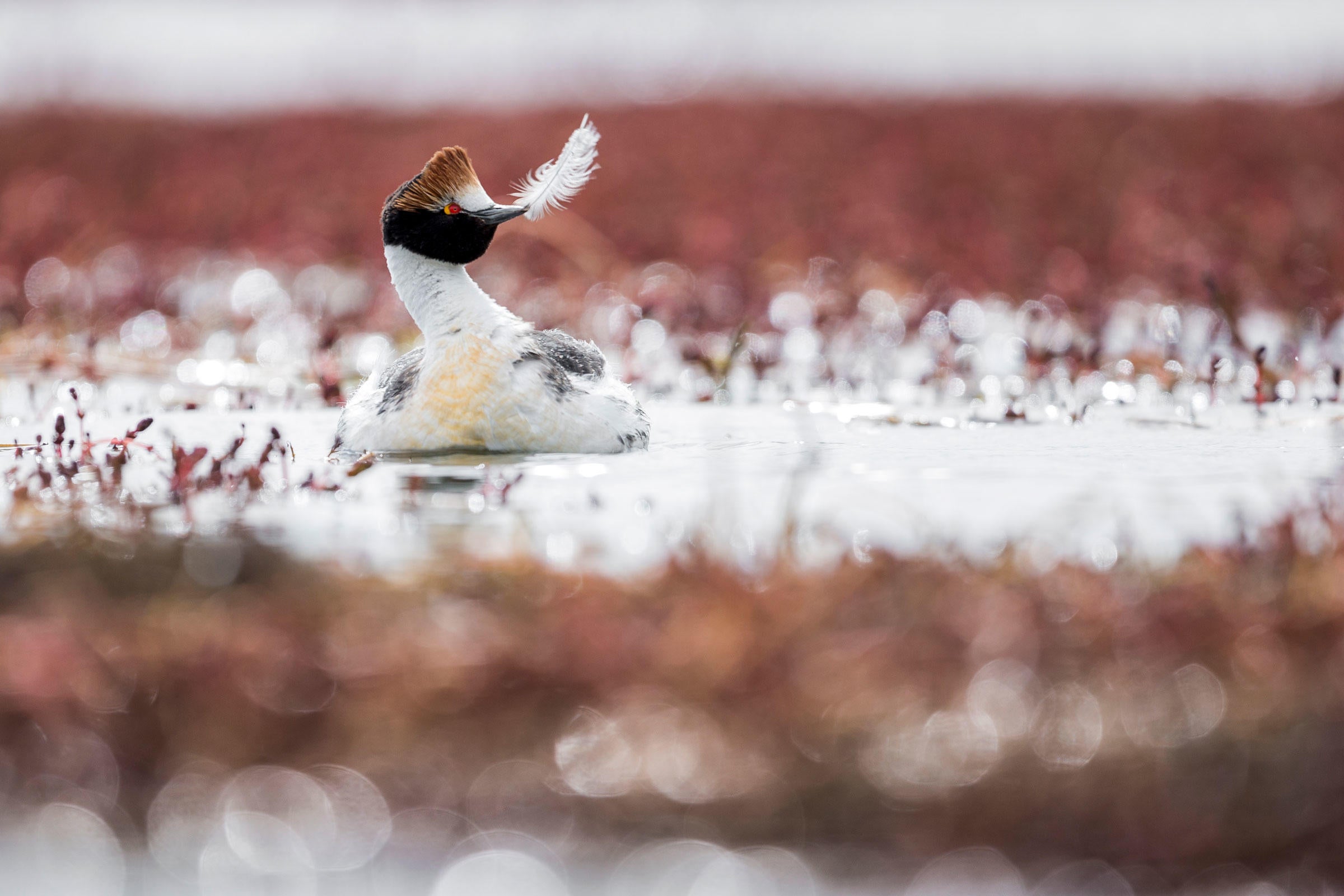 Like other grebe species, Hooded Grebes are known to eat feathers. Ornithologists believe the birds do so to help with digestion. Feathers in the gut could help fully absorb food or filter out any hard, indigestible bits like fish bones or crustacean shells, says Roesler. Grebes eventually expel the feathers in little pellets.

Mellone arrived at this lake (left) on the Buenos Aires Plateau to find Hooded Grebes displaying but building no nests. The birds require milfoil, an aquatic plant that grows up to the lake’s surface, to build floating nests. A few days after Mellone first arrived, evaporation dropped the water level, exposing milfoil and creating ideal breeding conditions. The lake and larger plateau are within Patagonia National Park, which protects about 130,500 acres of land in Argentina. This year Chile created a park within its borders with the same name; eventually conservationists hope to create a binational park, says Roesler, spanning from Chilean forests to the Argentinian desert. 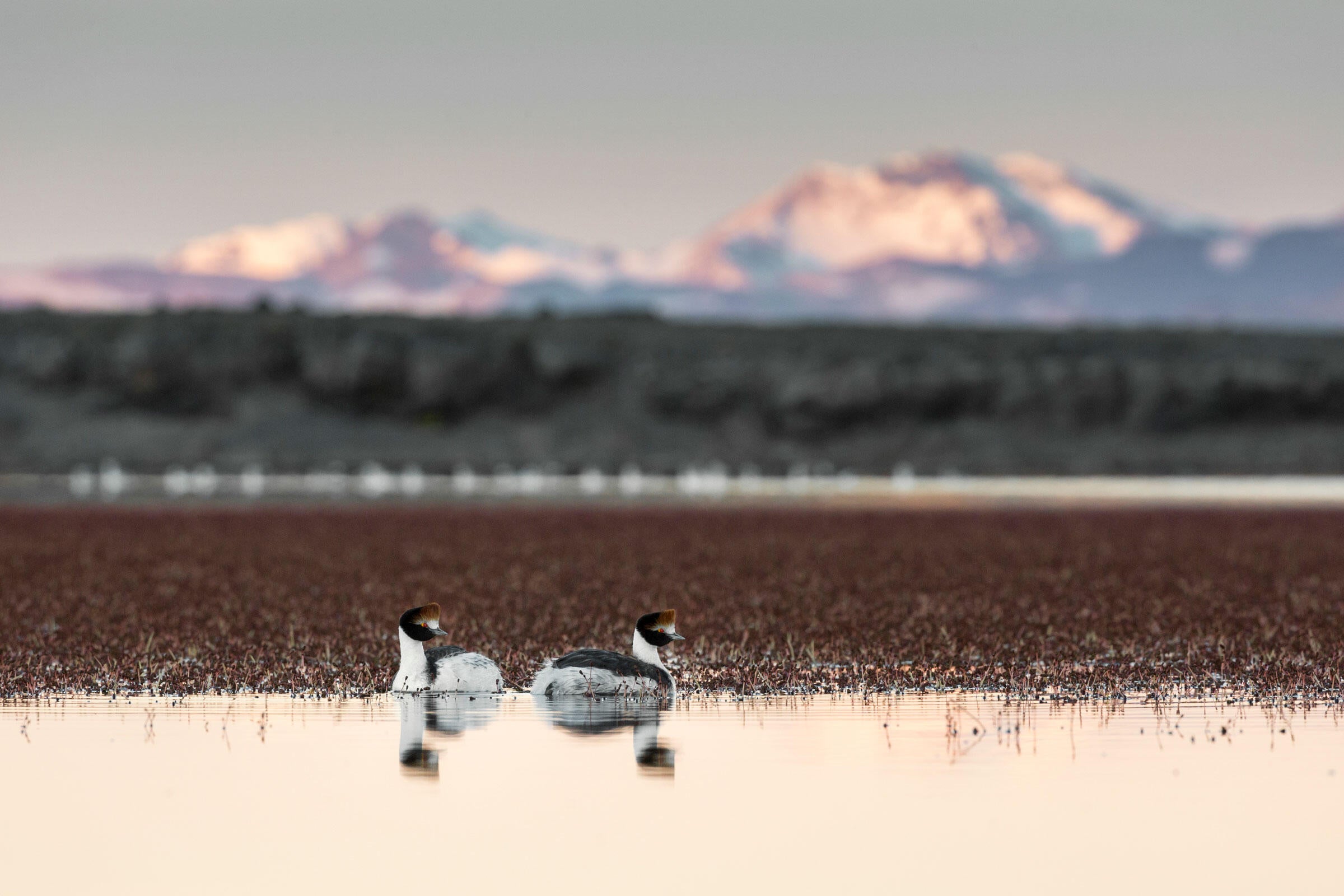 During the vulnerable time before chicks fledge, Aves Argentinas researchers and volunteers act as “colony guardians,” protecting the birds by hazing Kelp Gulls, for instance, and removing American mink that were introduced to the region.

Come February, the birds fly 100 miles east to overwinter on estuaries in Santa Cruz province. Some of the guardians will follow them there while others return home, anxious about their avian wards but confident they have done all they can to ensure the survival of another generation.

This story originally ran in the Fall 2018 issue. To receive our print magazine, become a member by making a donation today.