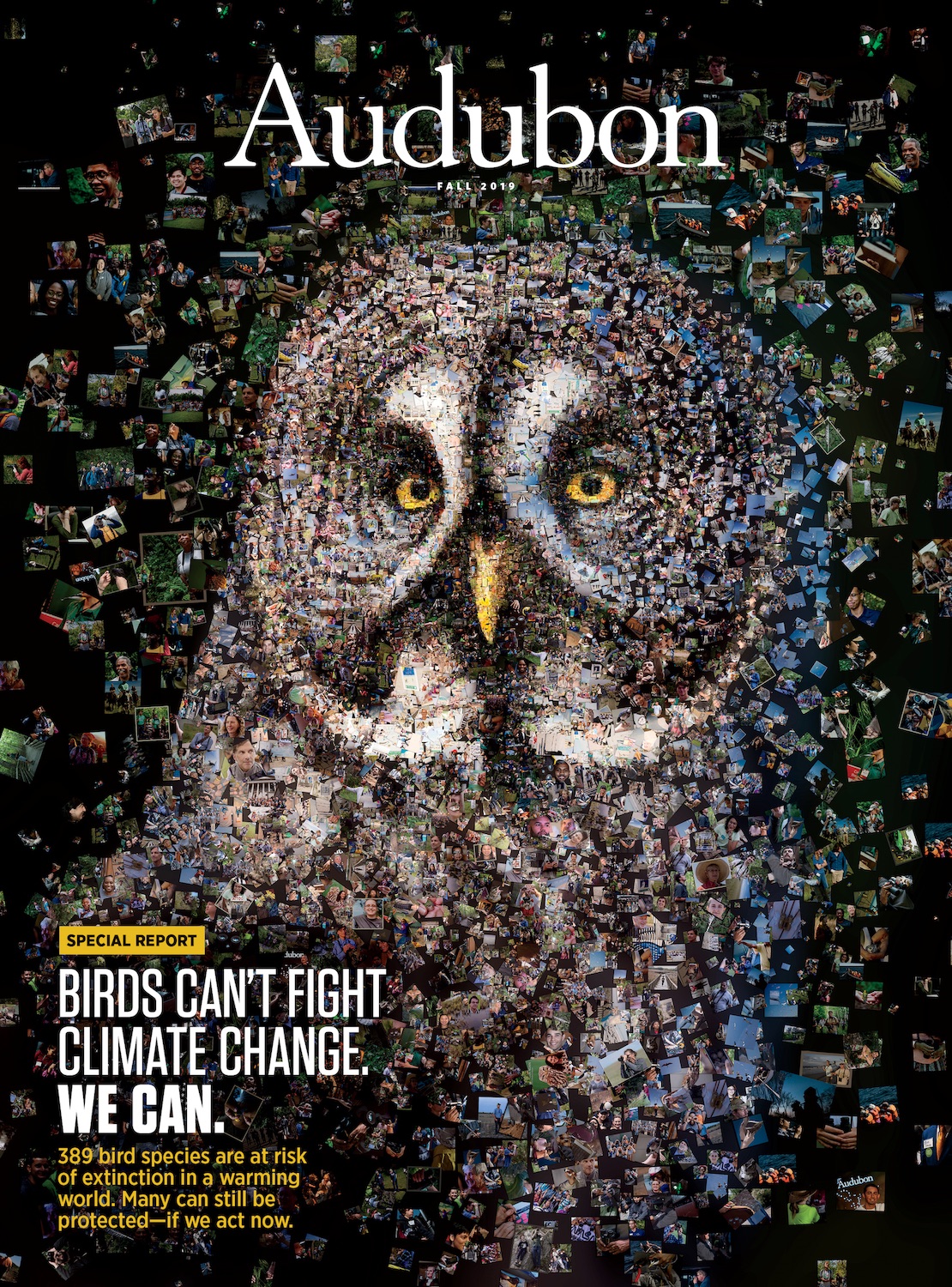 (Click on the image to zoom in on the pictures that make up the mosaic, or tap to load a larger image on mobile)

When Audubon magazine last published a special issue on birds and climate change, in 2014, the Golden Eagle that graced our cover created a powerful impression. The image was made up of hundreds of John James Audubon’s illustrations reflecting birds found to be threatened by climate change. Five years later, the science has advanced. The number of climate-threatened birds has increased. And so has the urgency with which people must act to prevent global warming’s most devastating effects. For this issue’s cover, we wanted an image that was equally impactful but also empowering. So we turned to the same artist and asked him to execute it with a twist.

The choice of the owl, too, is symbolic of the opportunity this moment in history holds.

The mosaic of a Great Gray Owl you see here is comprised of photos of Audubon’s staff and volunteers, spanning its network of chapters, centers, and state offices, taken over the past five years as they engaged in activities from bird walks and native-plant restoration to shorebird stewardship and lobby days with legislators. Visual designer Charis Tsevis took two weeks to arrange the 403 images sent to him into a photorealistic piece with meaning and depth.

“Thematically, this image has two fundamental premises: community and action,” says Audubon’s art director Kristina Deckert. “We could’ve used scientific imagery, or data, or birds, to make up the owl. But instead we used imagery of people doing the work because the story now is not whether climate change is happening, but what are we collectively going to do about it?”

The choice of the owl, too, is symbolic of the opportunity this moment in history holds. Audubon’s new climate report finds that the Great Gray Owl could lose 97 percent of its current summer breeding range if the global temperature increases by 3 degrees Celsius above pre-industrial levels. The owl’s Arctic habitat is warming faster than anywhere else on Earth, and once its remote taiga forest becomes unlivable there are few places farther north to which it can retreat. If we hold warming to 1.5 degrees, however, only 59 percent of its summer habitat would be lost, giving the Great Gray Owl a tangible foothold with which to survive a changing world.

Birds Are Telling Us It's Time to Take Action on Climate

We dedicated our entire fall issue to tackling the challenge of climate change, because humanity has no other choice.