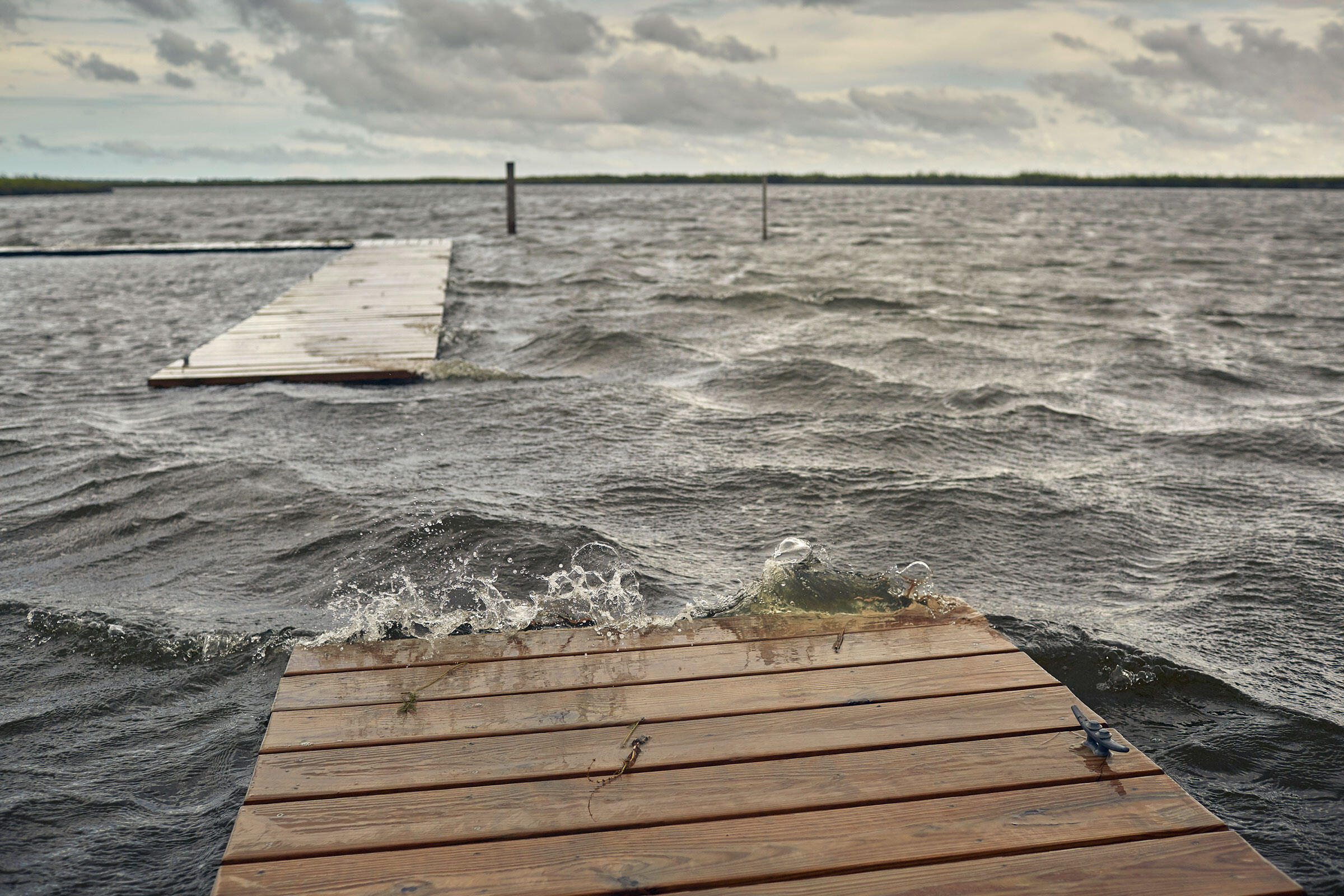 The Fight to Save Pine Island

As rising seas imperil its historic structures and famed waterfowl flocks, staff at the Audubon sanctuary are determined to defend the refuge by saving its wetlands.

When Robbie Fearn moved from the mountains of Alabama to the North Carolina coast in 2013, he didn’t realize that climate change would consume his career. The former wildlife-hospital director had been tapped to oversee the Donal C. O’Brien Jr. Sanctuary and Audubon Center at Pine Island, situated at the north end of the 120-mile-long string of barrier islands called the Outer Banks. A wild haven tucked among timeshares, the 2,600-acre property sits at the heart of one of the largest waterfowl wintering sites on the Eastern Seaboard.

But as Fearn quickly learned, the realities of climate change are unavoidable at Pine Island. Founded in 1910 as a duck-hunting club and managed by Audubon North Carolina since 2010, the property is pressed between the Atlantic Ocean and the Currituck Sound, a shallow estuary that separates the northern Outer Banks from the mainland. Every year, both bodies of water creep a little higher. Downpours and storms, intensified by climate change and heaped atop rising seas, now flood the sanctuary and its neighboring towns routinely.

At the same time, erosion is gnawing away at the estuary’s edges, clouding the sound with sediment that, in some places, has helped kill 95 percent of the aquatic vegetation. That die-off means less food for what Fearn calls “puddle ducks,” such as American Wigeon, Northern Pintail, and Green-winged Teal. Recent waterfowl counts on the sound have tallied 30,000 birds—a stark difference from the 300,000 reported in the 1970s. Nearly 200 bird species depend on Pine Island, and with continued warming, almost half will see their range shrink so substantially that they’ll be vulnerable to extinction, according to Audubon’s climate report.

They’ll face even tougher odds as climate change asserts itself more forcefully along the Carolina coast. When Hurricane Dorian hammered the Outer Banks in September, Pine Island’s sponge-like marshes helped to protect the property from the disastrous flooding seen on other barrier islands, Fearn says. But swelling seas could soon drown even those natural defenses. The rate of sea-level rise in the area—nearly one-fifth of an inch per year today—is expected to accelerate, pushing the water level up a full meter by the end of the century. Currituck Sound loses an average of roughly 70 acres of wetlands per year, and Pine Island has already sloughed off eight acres of shorefront since 2006. “I don’t know if the marshes will last another century,” Fearn says. “Once we get to two meters, the ability of the marsh to function will be compromised. At one meter, though, we have a chance.”

That’s a chance Fearn and his colleagues don’t intend to miss. With the effects of climate change threatening to wash away both Pine Island’s heritage and its future, they’re working to make the sanctuary more resilient while there’s still time. “The hope is that we can intervene now to get the marshes to adapt,” Fearn says. “We can help them help us.” 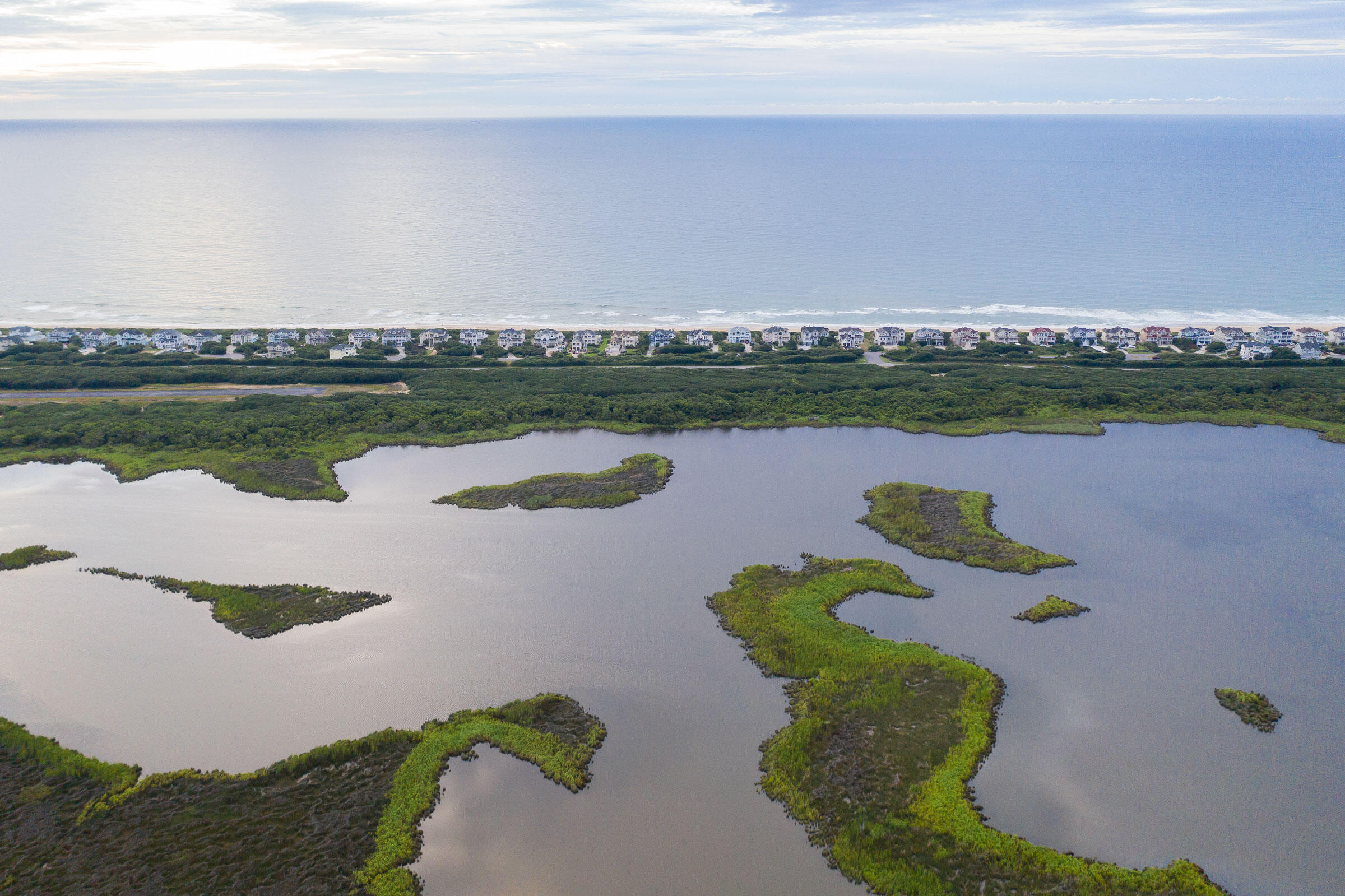 Homes occupy a narrow strip of the Outer Banks wedged between the Atlantic Ocean and the Currituck Sound near the Pine Island sanctuary. Photo: Justin Cook 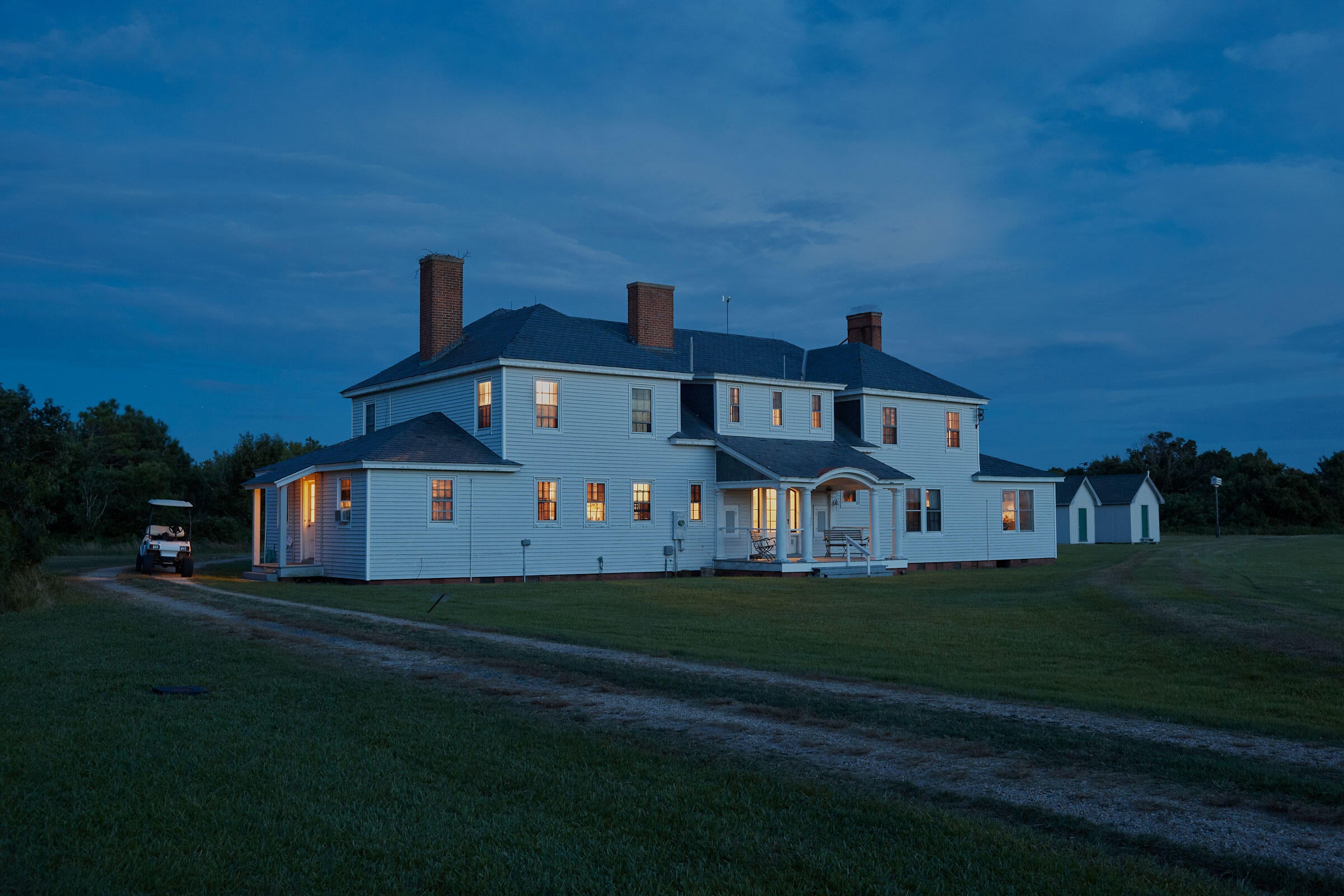 Plans for Pine Island's future include elevating the 1913 hunting lodge to save it from rising seas. Photo: Justin Cook 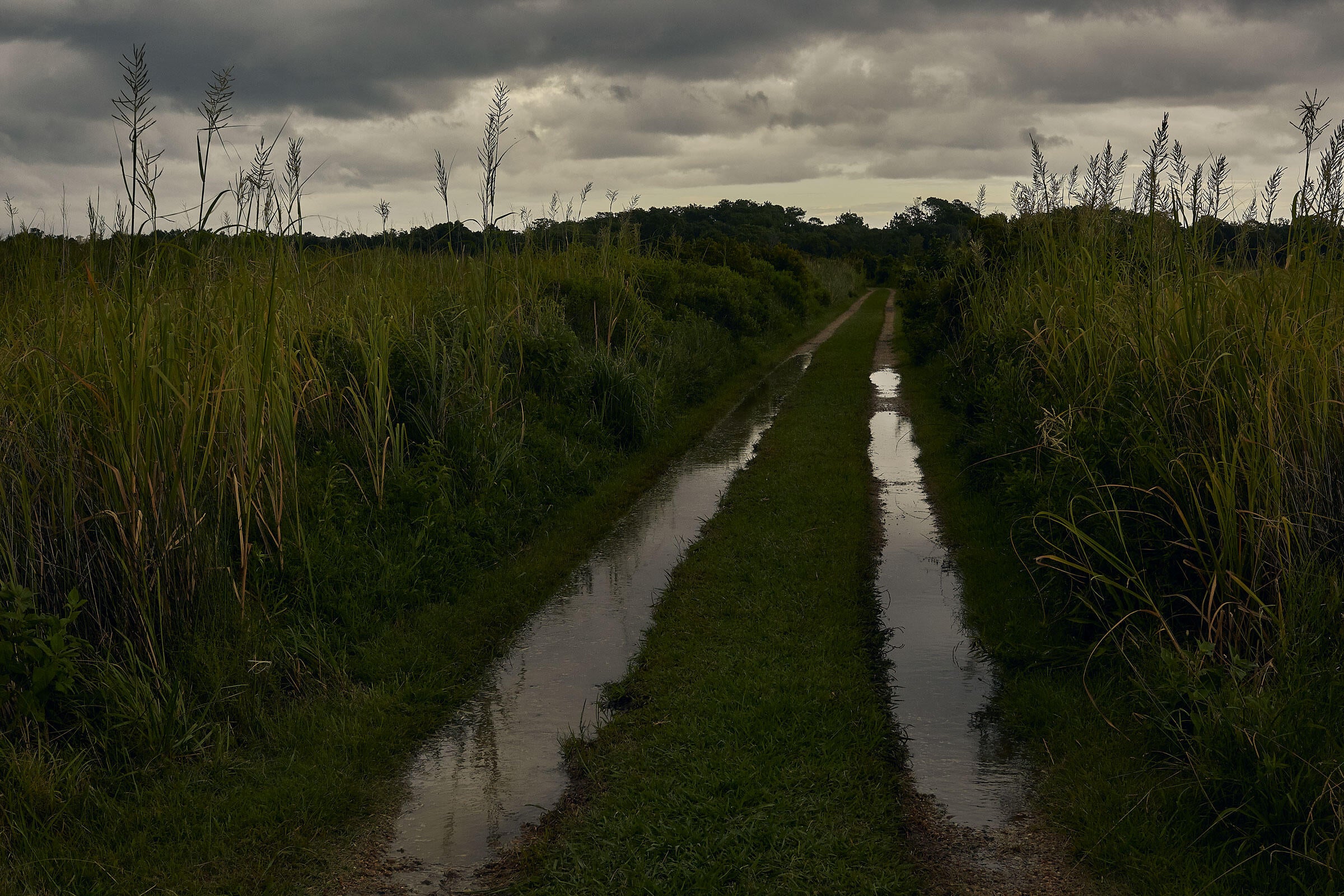 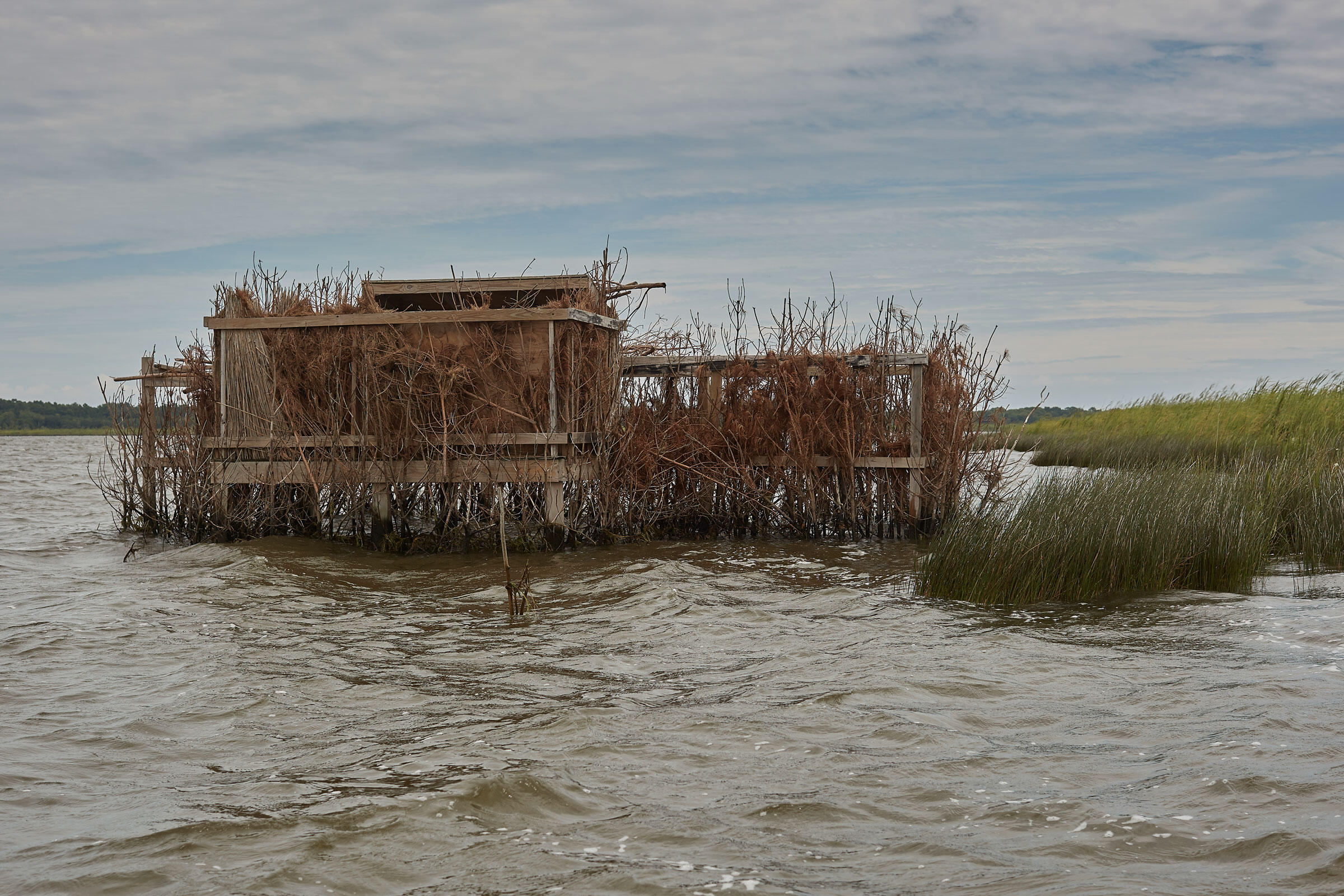 Duck blinds at Pine Island, still used for carefully managed hunts, hearken back to days when hundreds of thousands of waterfowl used the Currituck Sound in fall and winter. Photo: Justin Cook 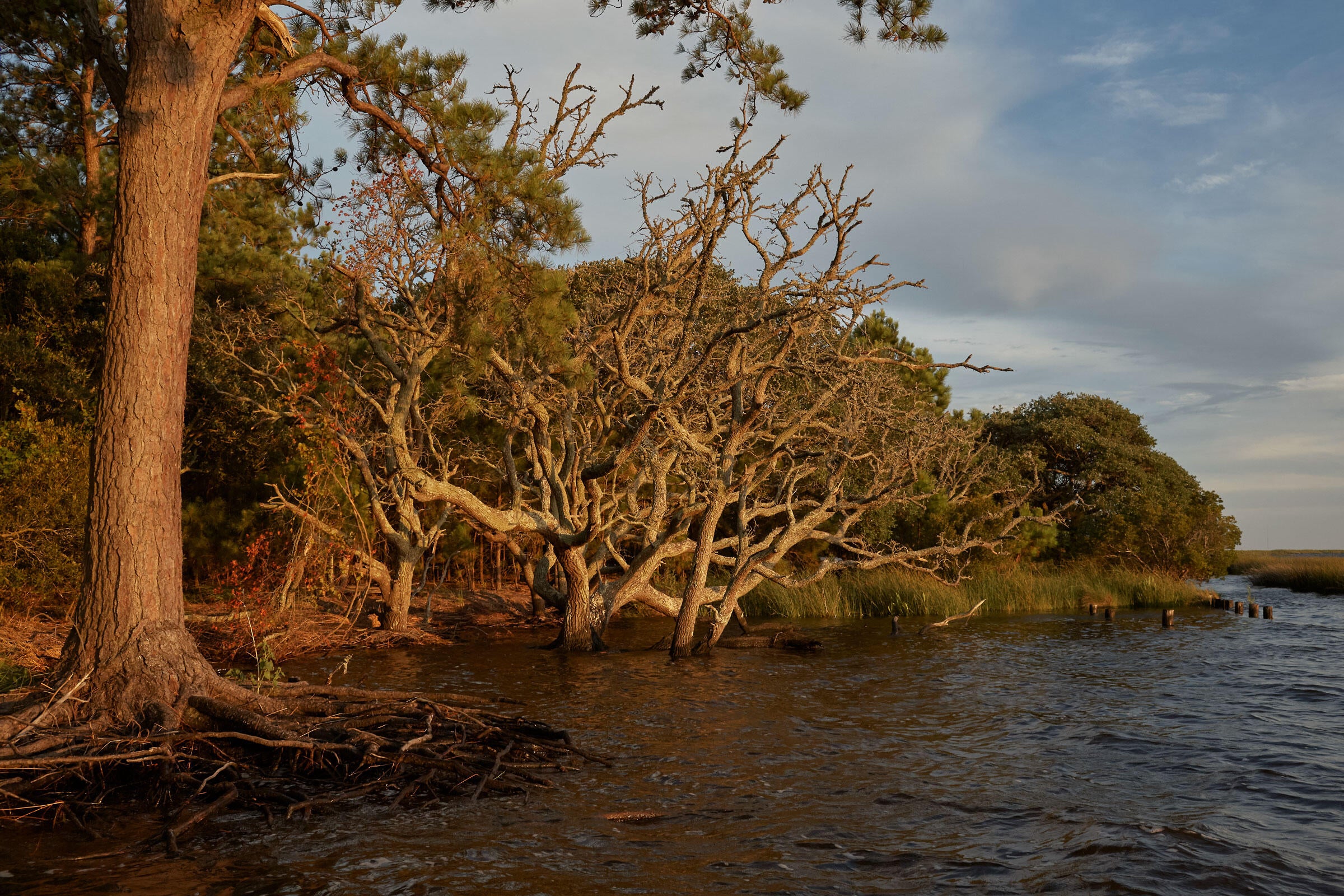 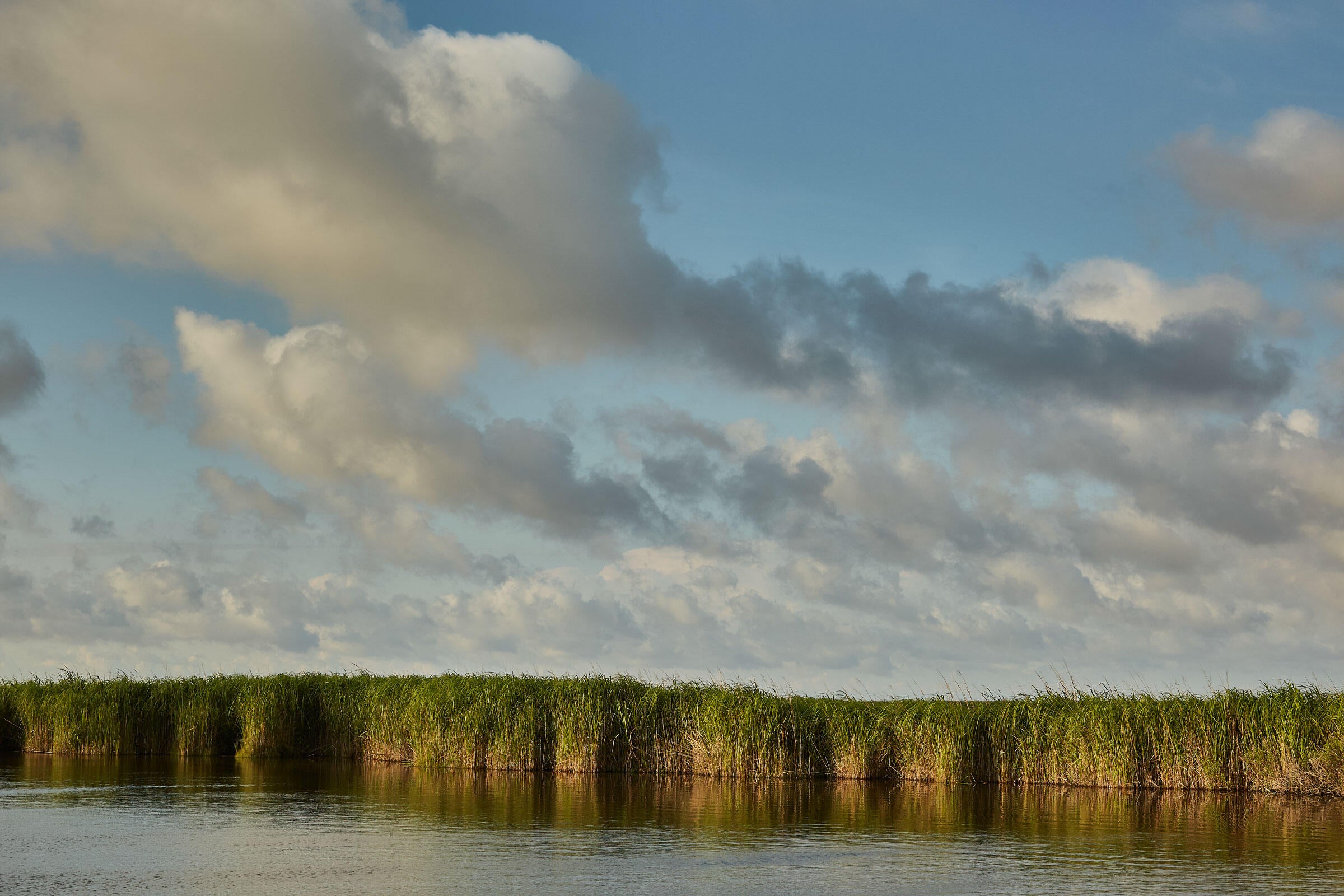 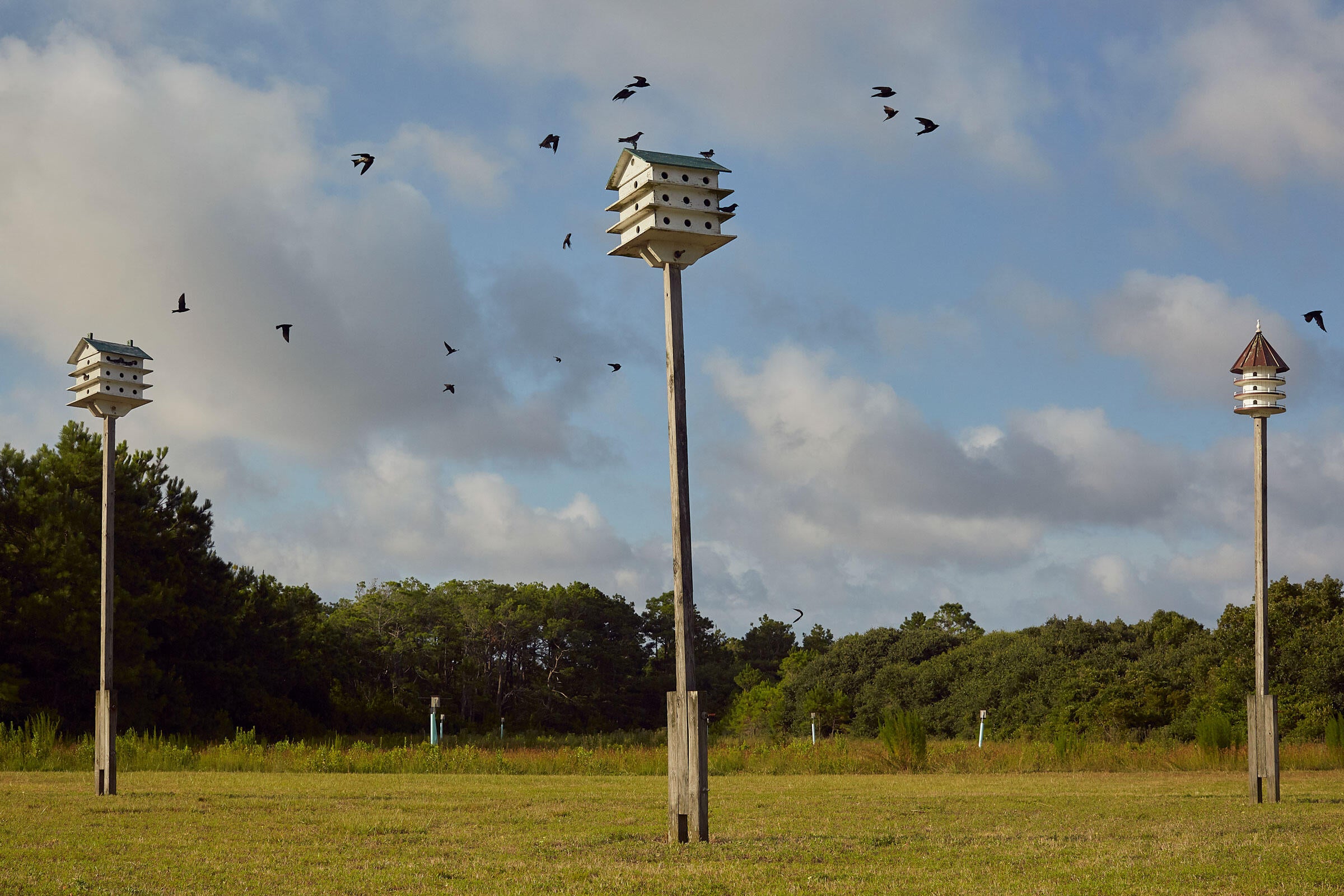 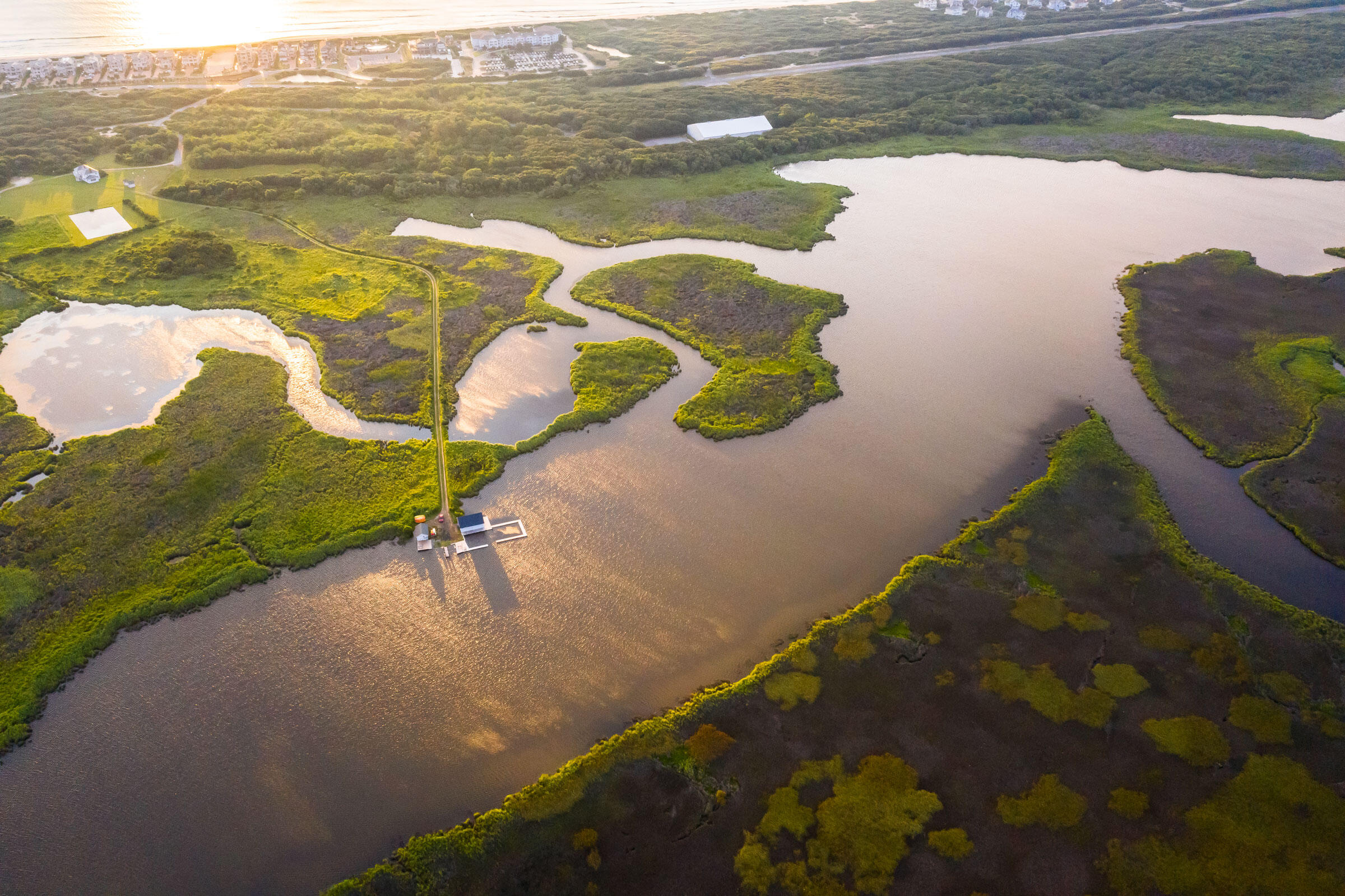 If the work at Pine Island goes as planned, the results may convince property owners to preserve and restore wetlands in other Outer Banks communities, where they’ve been largely paved over, exacerbating erosion and flooding. While seawalls and bulkheads have long been go-to coastal defenses, experts agree that wetlands offer stronger, cheaper protection against climate change. As sea levels rise, marshes can, too, by trapping sediment and plant matter and building up root material, says Bo Dame, a coastal ecologist at Chowan University who conducts research at Pine Island. This accumulation can create higher ground that shelters low-lying inland zones from surging waters. “If you save the marshes,” Dame says, “you save the rest of the system.”

That mindset is beginning to take hold across North Carolina as residents and local governments try to get ahead of the next climate-change-driven disaster. After Hurricane Florence, which killed 43 people and caused billions of dollars in damage in the state last fall, Governor Roy Cooper launched an initiative to slash greenhouse gas emissions and make the state’s coastal areas more resilient. As state officials work out the details of the resiliency plan due next March, they say they want to draw data and inspiration from existing scientific efforts, like those at Pine Island. With its extensive marshlands and its gates open to researchers, the sanctuary is the perfect place to fine-tune techniques for preserving coastal habitat that shields birds and people from the storms to come.

On a blazing-clear morning this June, representatives from Currituck County and the North Carolina General Assembly joined Dame and other scientists on a tour of Pine Island to learn about the realities of and possible responses to rising seas. With Fearn at the lead, they trudged down the trail from the historic hunting lodge to the boathouse, only to find their path blocked by a foot-deep pool of Currituck Sound spillover. With no way around it, they retreated inland.

Erosion has made this part of the property especially prone to flooding; Fearn has already had to raise a dock here by more than a foot. Starting this fall, Audubon North Carolina will use satellite imagery, soil and plant studies, and sea-level-rise models to map out Pine Island’s transition, flag other flood-prone problem areas, and identify the habitats that can still be salvaged. They also plan to build a pavilion and potentially a laboratory where experts like Dame can conduct their own research, and members of the community can see climate experiments in action. 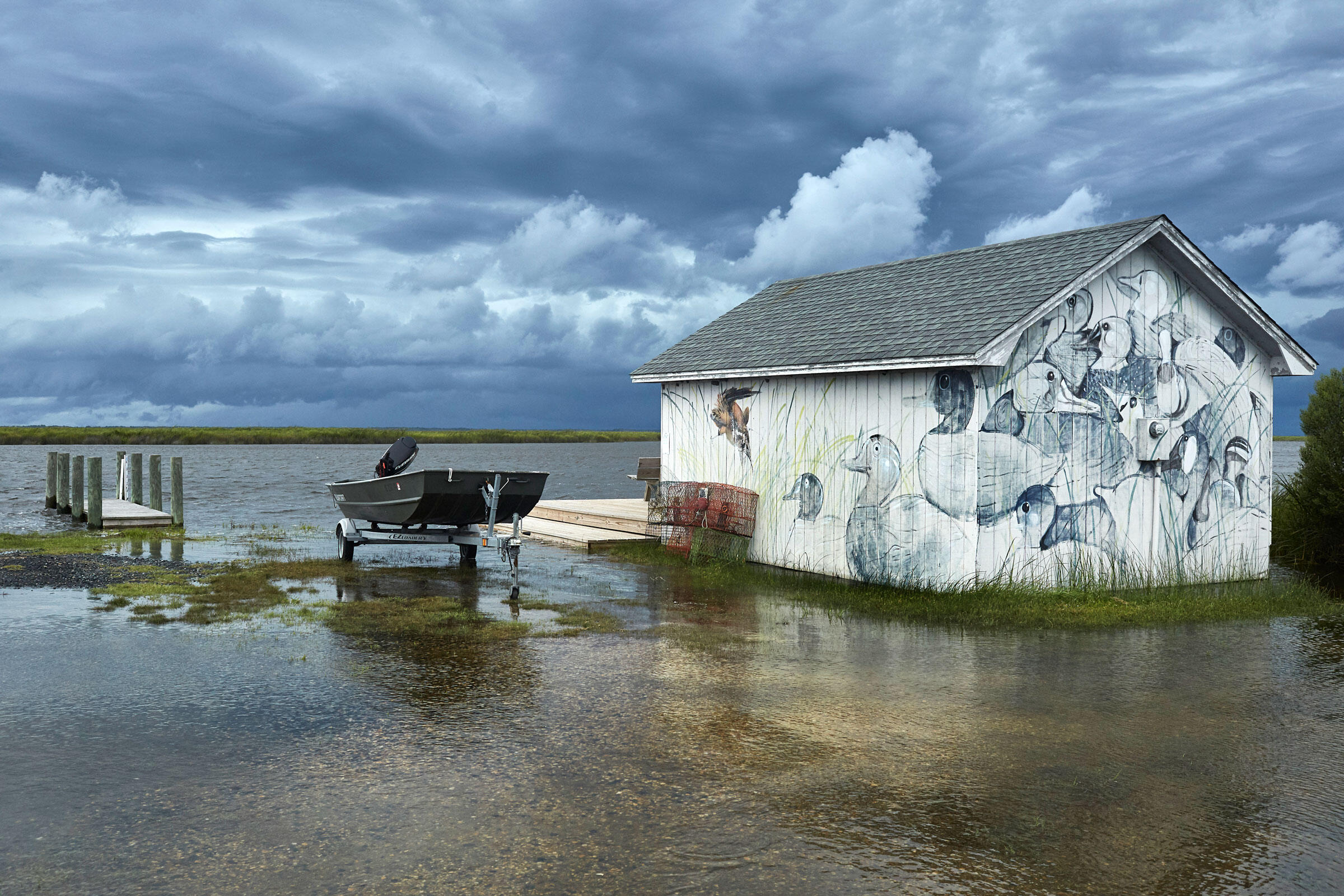 One of those trials involves building what’s known as a living shoreline. Next year Fearn and his crew will install a wood-and-vinyl breakwater just offshore that’s permeable enough for fish, crabs, and water to pass through, but which will soften wave action enough for sediments to build up behind it. Then they’ll seed that new terrain with native grasses like needlerush to hold it together and strengthen the property’s fortifications, which should ease erosion around the boathouse.

The living shoreline concept is of particular interest to residents of the northern Outer Banks, says Chris Layton, the town manager of nearby Duck, which is now adding climate resiliency to its 15-year land-use plan. Michael Regan, the head of North Carolina’s Department of Environmental Quality, is eyeing Pine Island’s progress for the state’s climate adaptation and resilience plan, too. “We don’t have to look far for effective solutions,” he says. “Wetlands like those at Pine Island have shown they serve as a buffer against intense storms and flooding. They have the ability to self-heal.” Choosing wetlands over walls may seem strange to some longtime Outer Banks residents, but Regan says change is overdue. “We can’t keep putting Humpty Dumpty back together the same way and expect different results.”

These tools won’t work everywhere, though, and experts say that some prime Outer Banks real estate may have to be abandoned to nature as part of a strategic pullback. The designs for Pine Island’s future embrace this need for thoughtful retreat: Audubon North Carolina has identified higher ground for the new lab and pavilion and is raising funds to add a seven-foot-tall base to the century-old hunting lodge. Fearn hopes elevated boardwalks between buildings will allow visitors to amble through the property, even as its verdant paths transition to full-blown wetlands. 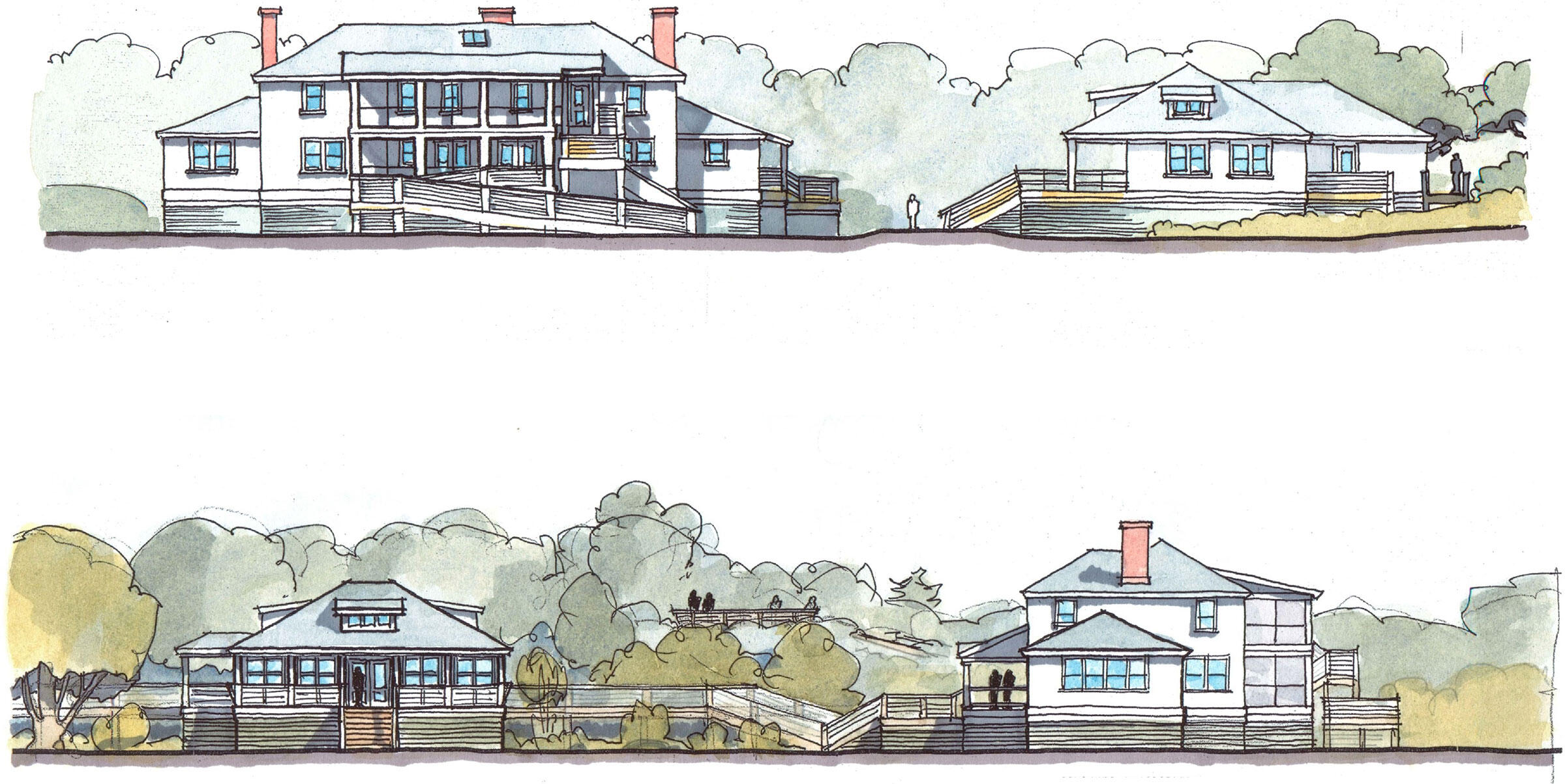 Retreat is not the same as giving up. Fearn and his team are fighting to save the marshes, fighting for the survival of the northern Outer Banks and its heritage. He carries around this sense of mission as he makes his daily rounds of the sanctuary and falls asleep to the whistles of Chuck-will’s-widows. “To me, the past is a symbol of what the ecosystem could be supporting,” he says. “When I hear people talk about how waterfowl would blacken out the skies here, it gives me inspiration. That’s the future I want for the Currituck Sound.”

This story originally ran in the Fall 2019 issue as “Island Retreat.” To receive our print magazine, become a member by making a donation today.​