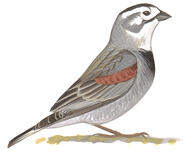 Decades later, on a Friday this June, chapter president Nancy Casey opened an email from a member and learned that Mitchell was also a slaveholder. Quick research further revealed he wrote a book defending the disgraceful institution. Fourteen hours and many frenzied calls later, she announced the chapter would change its name. “This isn’t about erasing history,” says Casey, now leader of Blue Ridge Audubon. “This is about understanding that these types of things can hurt people today.”

The decision came amid a new wave of reckoning with the white supremacy, systemic racism, and colonialism that shaped this nation’s past and persists today. Sparked by mass protests—and momentum racial-justice advocates have built over decades—cities, schools, the military, and more are reexamining symbols of this history. Wildlife, too, carries the weight of a problematic human past. In August, the American Ornithological Society (AOS) renamed a bird that honored avian collector John P. McCown, a Confederate Army general.

“More people are now seeing the massive scale of racial oppression and subjugation that forms the underpinnings of our country and so many of our social and cultural institutions,” says Harvard University historian Tiya Miles, an expert in 19th-century Black, Native American, and women’s history.

These tainted foundations also prop up modern conservation, environmental, and scientific groups, which were shaped by ideas of white naturalists who benefited from Black and Native American knowledge and explored land emptied of its original inhabitants. Some propagated racist ideologies. This summer, organizations like the Sierra Club and American Museum of Natural History publicly confronted the dark side of their legends, John Muir and Theodore Roosevelt.

The National Audubon Society, too, began unraveling the myth of John James Audubon.

The National Audubon Society, too, began unraveling the myth of John James Audubon—its and this magazine’s namesake. The influential naturalist and artist enslaved Black people in the 1810s and ’20s and held white supremacist views, among other fundamental flaws. Until recently, scholars and stewards of his legacy minimized these facts; this summer Audubon president David Yarnold condemned them for the first time. “Audubon’s founding stories center on the groups of women who came together to end the slaughter of birds for their feathers (mostly for fancy hats), but we have glossed over the actions of the American icon whose name we bear, as well as the racist aspects of our organization’s history,” he wrote.

Grappling with both may facilitate a more welcoming birding community today. Wildlife biologist Danielle Belleny, for example, says she feels slightly betrayed that she was taught to hold such flawed figures on a pedestal. But, she says: “I do appreciate that people are now coming forward with this history, even if it is a bit late.” She and others who organized Black Birders Week, a grassroots effort this summer, have called for elevating contributions of non-white naturalists whose stories have been largely sidelined.

She is also among thousands of birders who support a campaign to revise all of North America’s nearly 150 eponymous bird names, erasing the specter of racism and colonialism from field guides in one swoop. To date, such upending of convention goes too far for the AOS scientists who govern names—though they’re easing a path for more bird-by-bird name change proposals with social justice in mind.

In any case, it’s not enough to change a name or apologize for the past, says writer and professor Lauret Savoy, who specializes in U.S. conservation history and race. These needed actions must be joined by an honest look at how race and racism once influenced—and continue to influence—organizations’ identities, as well as transparent steps to incorporate justice, equity, and diversity in all work today. “The very necessary structural work must be the key,” she says.

Toward this, Yarnold said Audubon will more deeply examine its history and prioritize equity, diversity, and inclusion in its hiring, training, and mission. Blue Ridge Audubon, for one, bought binoculars that its volunteers will use to create a program at a city recreation center to bring the joy of birds to a more diverse audience. “You’ve got to make connections and show up for people rather than just inviting them to us,” Casey says. On this and many fronts, Audubon and the broader community have work to do.

This story originally ran in the Fall 2020 issue as “A Historic Moment.”​ To receive our print magazine, become a member by making a donation today.