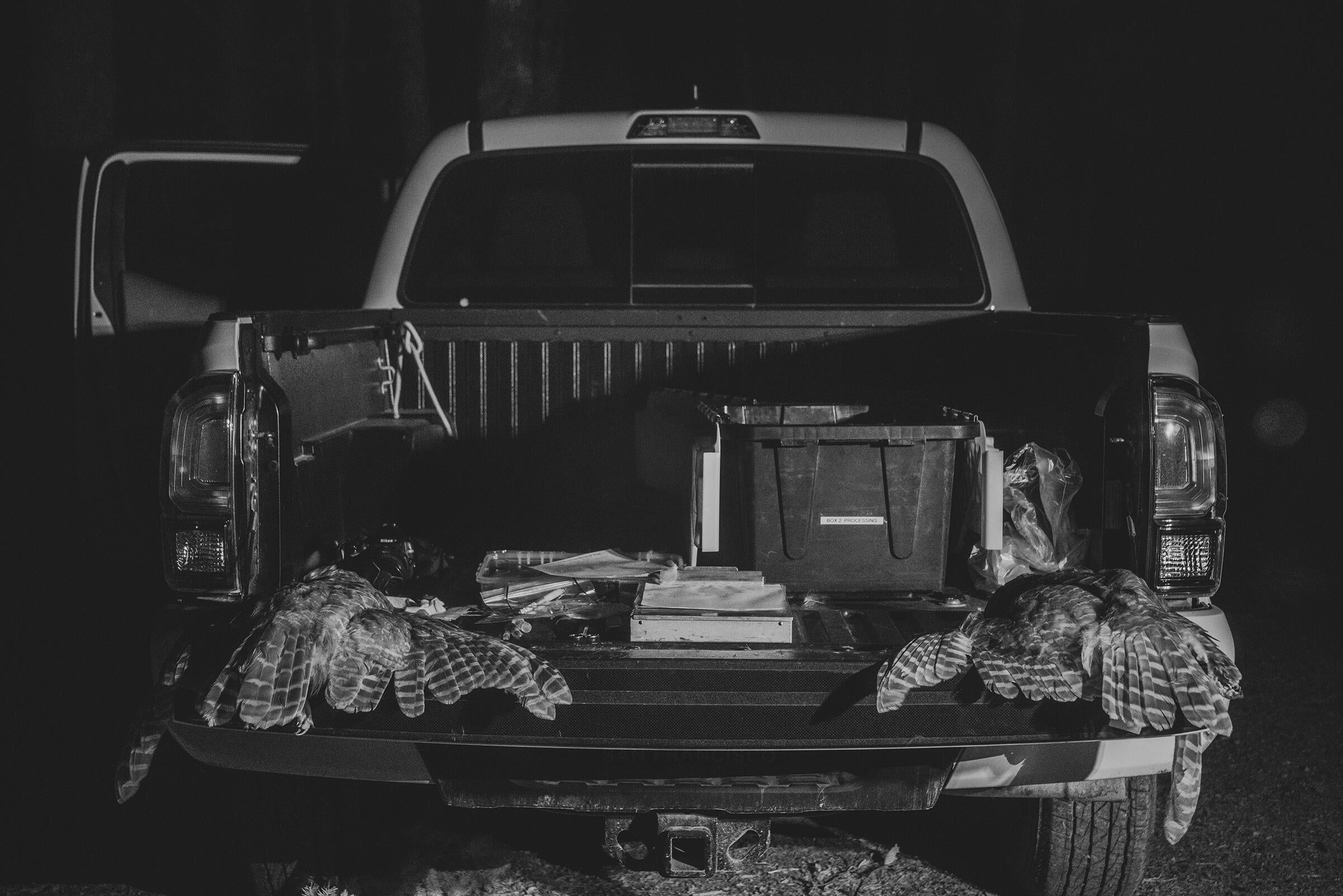 Preventing the Pacific Northwest icon’s extinction calls for aggressive intervention, including killing another owl species. Will we act fast enough?

Night hangs over the Hoopa Valley Reservation. Stars spill toward the evergreen horizon as Mark Higley, a wildlife biologist for the Hoopa Valley Tribe, places a speaker on an unpaved road. Soon a recorded bird call—Who cooks for you? Who cooks for you all?—tumbles down the Northern California valley. A few minutes later, the faintest of replies. These hoots slowly build as the Barred Owl draws closer, bracing for a turf war, until the calls are almost on top of one another, on top of Higley, filling the entire night.

Then a handsome young male materializes in a copse of hardwoods, calling expectantly. Higley points a 12-gauge shotgun at the dark-eyed bird, eponymous horizontal bars resplendent on its upper breast, and the crack that follows shatters the air. Wings splayed, the Barred Owl lingers a moment before gravity prevails.

The digital owl continues to call from the speaker, and before long another voice resonates through the woods: a female. The second owl swoops up the valley like an echo, and Higley reprises this sober scene. Call, aim, blast, fall. Tufts of down float across the road like moths.

After placing the dead male in the truck bed, Higley smooths the bird’s neck feathers—a movement at once quick and gentle. He does not enjoy killing owls. But he tries to extract as much purpose from it as possible: swabbing their microbes, drawing their blood, collecting their stomach contents, anything that might be of use to science. He has been sending the bodies to museums and universities, but the birds are saturating collections like they are saturating Northwest forests. “Now my freezers are packed full of birds I can’t get rid of,” he says. “Eventually I’ll have to start burying them.”

Photographer Morgan Heim made these images in the dark, using special equipment to minimize disturbance to wildlife. Assistants illuminated subjects with an infrared flashlight that, while invisible to owls and the naked human eye, allowed Heim to prefocus her camera, which was modified to record infrared light and used infrared flashes.

Higley performs this heavy task night after night as part of a broader effort to save another raptor, the Northern Spotted Owl. A polarizing icon of the Pacific Northwest, the Spotted Owl captured the national spotlight during the so-called Timber Wars of the 1980s and ’90s that pitted loggers against newly minted environmental activists. The bird’s 1990 listing as threatened under the Endangered Species Act (ESA) reverberated through the region and reshaped forest management. Yet scientists say it is now spiraling dangerously close to extinction.

Named for its cloak of white marks, the Northern Spotted Owl—one of three subspecies, along with the California and Mexican Spotted Owls—dwells in mature, structurally complex forests stretching from Northern California into British Columbia. While Timber War tensions may have cooled, loggers still prize the girthy trees that buttress this ecosystem. And two new threats have emerged: the explosive growth of Barred Owls, which have expanded westward into Spotted Owl territory where they’re considered invasive, outcompeting the smaller bird and vacuuming up prey; and catastrophic wildfires, worsened by climate change and historical forest management practices, that could suddenly wipe out those owls that are left.

“These things are all intersecting in a way that dramatically increases the challenges we’re facing,” says Bob Sallinger, director of conservation for Portland Audubon, one of several groups that sued the U.S. Fish and Wildlife Service more than three decades ago to get the bird on the endangered species list. “The Spotted Owl is in a significantly more dire situation than when it was initially listed.” 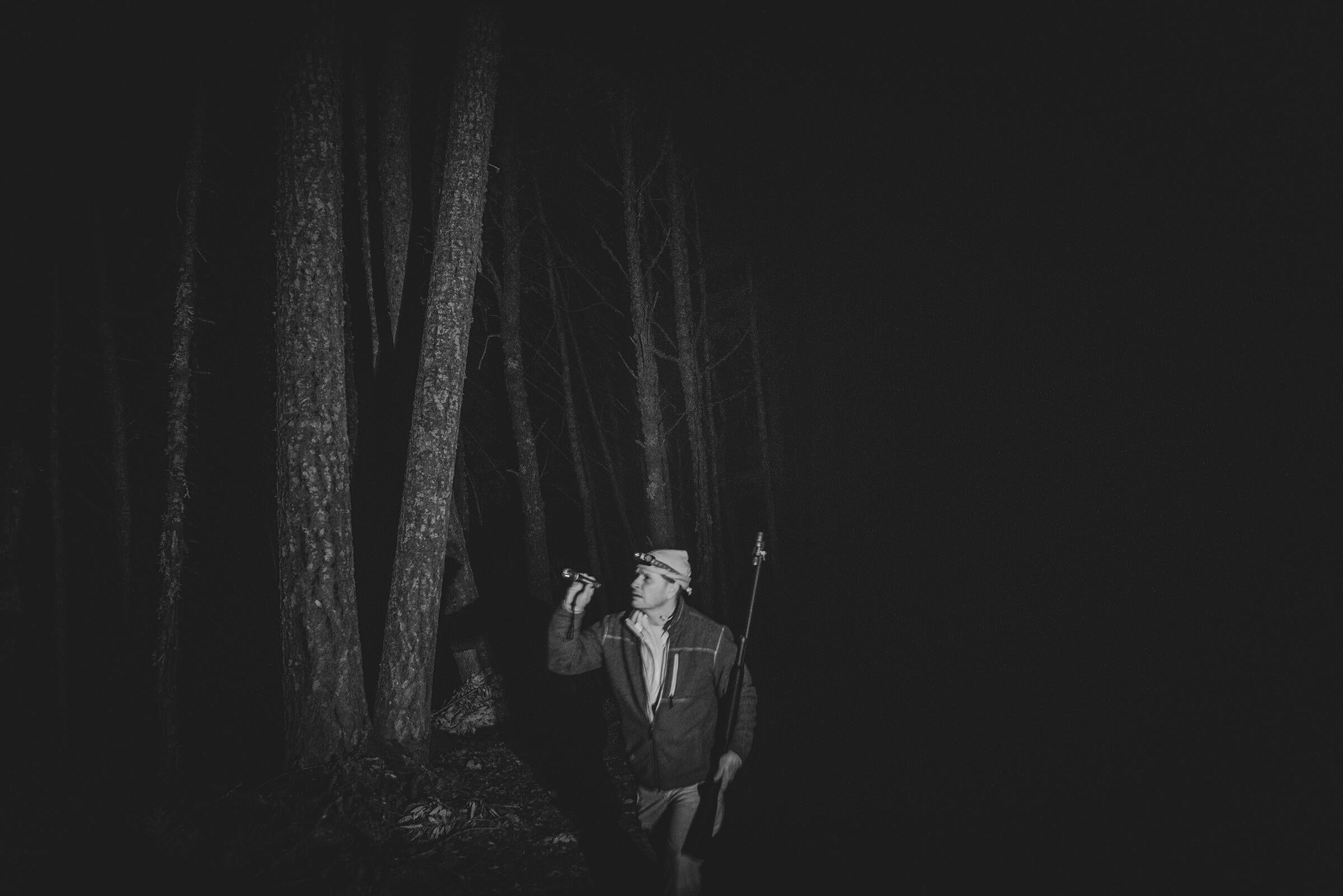 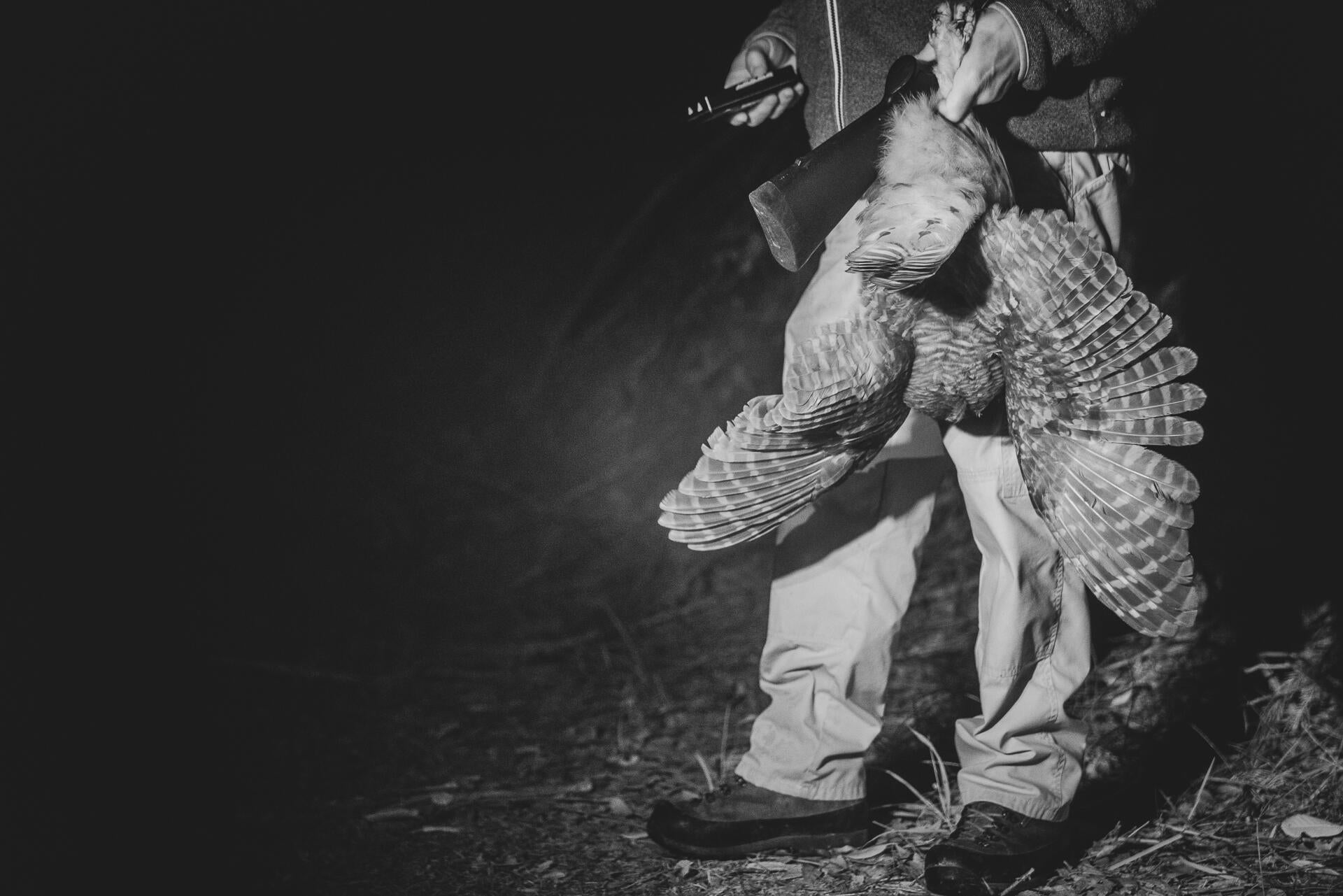 Mark Higley carries an invasive Barred Owl he shot on the Hoopa Valley Reservation. He hates killing the birds but knows it is an effective strategy to help save the native Northern Spotted Owl. Photo: Morgan Heim 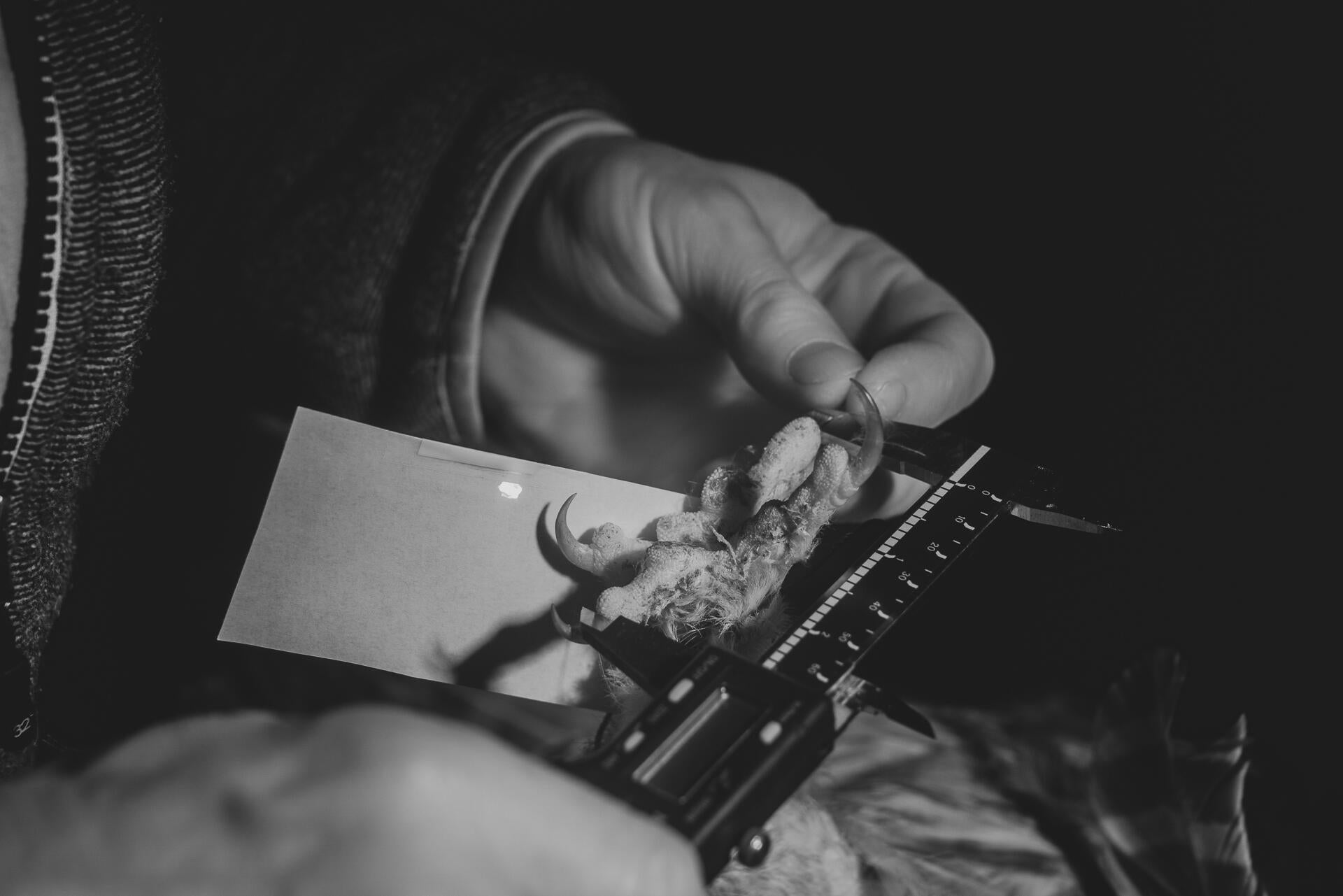 Mark Higley measures the foot of a Barred Owl he shot as part of an effort to save Northern Spotted Owls. He gathers as much data as possible from each bird so that their deaths serve a purpose. Photo: Morgan Heim

The U.S. Forest Service’s best estimate is that between 3,000 and 5,200 Northern Spotted Owls remain on federal lands. An analysis in Washington, Oregon, and Northern California last year found that between 1995 and 2018, Spotted Owl populations in many areas shrank by at least 65 percent. In some places where the owls used to number in the hundreds, researchers could find only a single bird, if any. “The populations are really at a tipping point right now,” says Alan Franklin, the study’s lead author and a research scientist with the U.S. Department of Agriculture’s National Wildlife Research Center. “Something has to be done quickly.”

“Something has to be done quickly.”

Paul Henson, who led the FWS recovery program for the bird until his retirement in June, says the situation calls for action on multiple fronts: Preserve the best remaining habitat, control the Barred Owl, and manage forests to avoid the most serious wildfires. But progress on some points has been sluggish. And despite a 2020 acknowledgment from the FWS that the threatened subspecies should now qualify as endangered, the Trump and Biden administrations both declined to change its status, citing “higher-priority actions” for other species.

So, three decades after Time splashed the handsome nut-brown bird across its cover, an unsettling question emerges: Will we rise to the challenge in time to save the Northern Spotted Owl?

he cathedral-like forests where Spotted Owls nest and hunt under a closed canopy are vestiges of an ancient Pacific Northwest. Stewarded by first peoples since time untold, these bountiful lands have brought forth incredible biodiversity that makes the spectacular routine, including cedars 15 feet across and redwoods 300 feet high. Around the mid-19th century, European settlers began to more aggressively fell such giants, and the transformation of the forests began.

The timber industry soon dominated the regional economy. After World War II, having thinned private timberlands of their most valuable trees, logging companies turned their new gasoline-powered chain saws toward federal forests. Back then, the Forest Service viewed trees as crops ready for harvest and underestimated the old-growth ecosystem’s value. When the logging trucks arrived, the agency opened its gates. Timber harvests increased throughout the 1960s and ’70s, putting the industry on a crash course with the emerging environmental movement.

Meanwhile, scientists arrived at two key realizations. First, old-growth forests—those around 150 years and older—were in fact immensely productive, diverse ecosystems. Second, a rare owl subspecies was closely associated with them. Throughout the 1980s activists took to the courts to challenge timber sales and even put their bodies between trees and chain saws, but habitat essential to the Northern Spotted Owl and other wildlife continued to topple. By 1987, as timber harvests on public lands reached an all-time peak, concerned environmental groups decided to use a new legal tool to compel action: Portland Audubon, Seattle Audubon Society, and others petitioned the FWS to add the owl to the endangered species list.

It took lawsuits and another three years for the agency to finally list the bird as threatened and then a judge’s intervention to enforce its protection. In 1991 the first of several court orders had a dramatic, immediate effect, pausing new timber sales. But the restrictions arrived just as globalization and a souring economy were straining the lumber industry. Its supporters began sporting T-shirts with the motto “Save a logger, eat an owl.” Franklin recalls being chased by vehicles and shot at in the dark while studying owls in a logging community. “Things did get ugly,” he says.

Tensions boiled over, surging beyond this mossy corner of the country. In 1993 President Clinton convened a forest summit in Portland, Oregon, where he and his cabinet listened to timber executives, scientists, activists, and others. The eventual outcome, the 1994 Northwest Forest Plan, was a milestone, outlining the first federal, landscape-scale environmental policy across the region, agencies, and species. “From an ecological and a conservation perspective, the Northwest Forest Plan, in my opinion, has been a tremendous success,” Henson says.

Even so, timber companies have chafed at the plan’s restrictions on how much they can cut, and legal challenges over logging levels continue to this day. One major battleground has been over how much land the FWS considers critical habitat—basically, the places deemed essential to the bird’s survival. Anytime the federal government undertakes, funds, or permits activities that may affect that habitat, such as logging or road construction, it must ensure the actions will not lead to the owl’s extinction or permanently hobble its recovery.

Critical habitat for the Northern Spotted Owl has been a political football ever since it was first designated in 1992, says Susan Jane Brown, senior attorney and wildlands program director with the Western Environmental Law Center. In 2012, the FWS—better understanding the threats to the bird’s survival—upped the designation by almost 40 percent to nearly 9.6 million acres. In 2021 Trump-appointed officials in the Department of the Interior slashed the extent of critical habitat by 3.4 million acres—despite Henson warning such an action would lead to “the eventual extinction” of the subspecies. The Biden administration later reversed that decision, though it excluded roughly 200,000 acres in Oregon related to the settlement of a timber industry lawsuit. 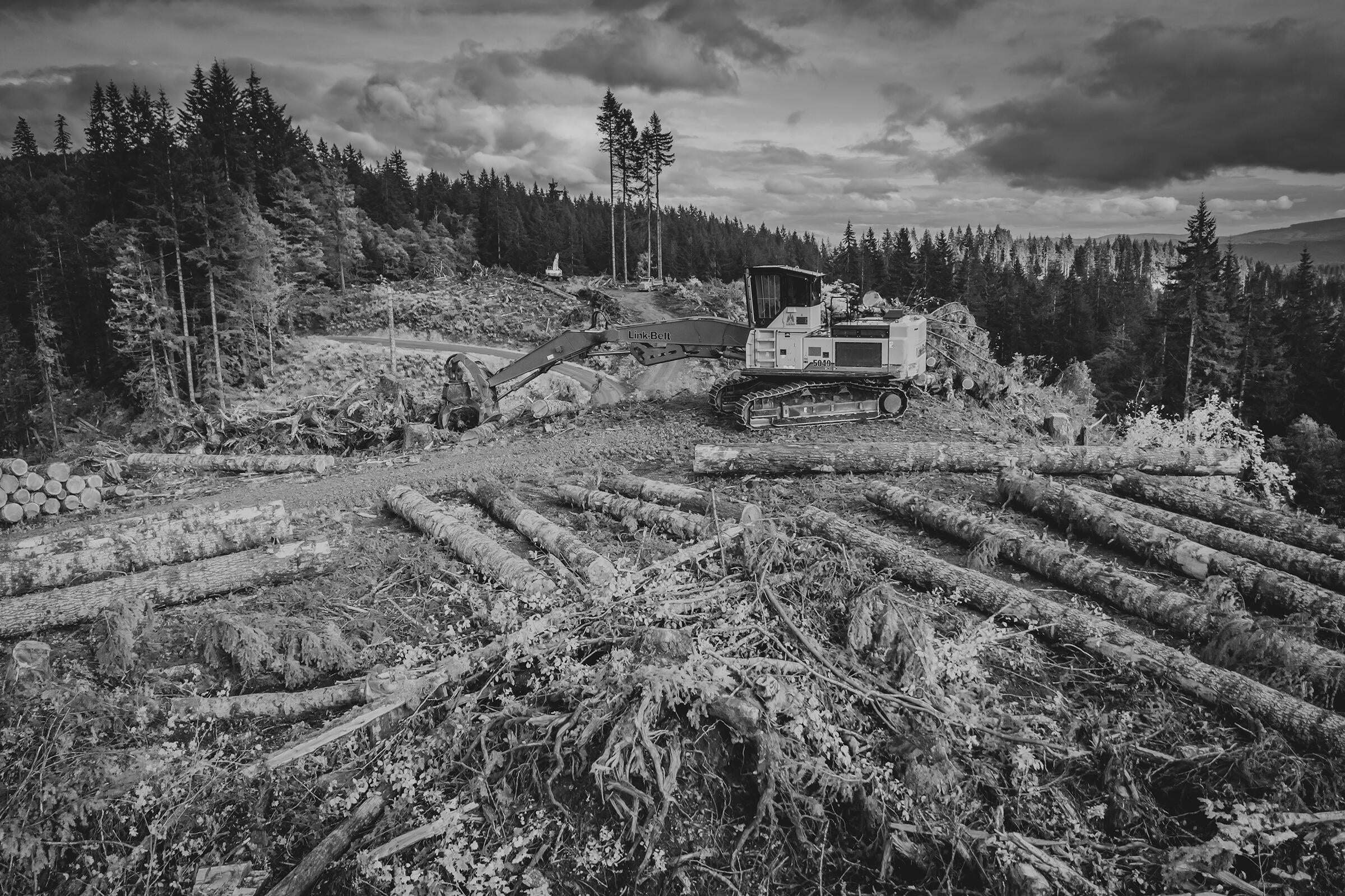 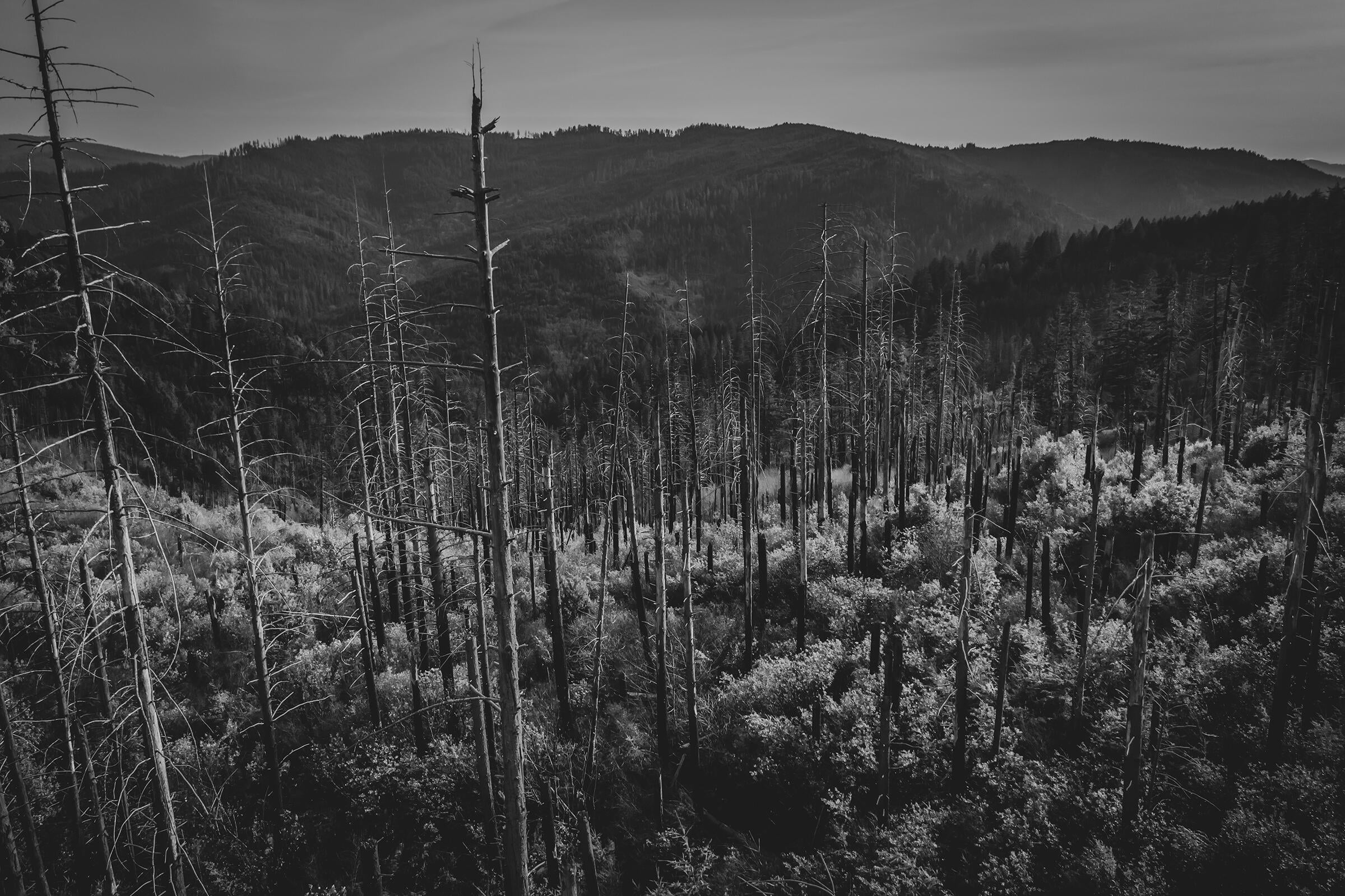 The scars of a 2009 fire linger in what was Spotted Owl nesting habitat adjacent to the Hoopa Valley Reservation. Photo: Morgan Heim

Given the bird’s perilous position, Brown says federal land managers should halt all commercial logging in its critical habitat that isn’t aimed at restoring forest health. Her organization is filing lawsuits on behalf of conservation groups against Bureau of Land Management timber sales and logging plans. “I cannot believe we are fighting over critical habitat still,” she says. “If you take that political football off the board, you can get down to brass tacks about how we restore and manage the forest. And then what do we do about Barred Owls?”

Since the early 20th century, Barred Owls—perhaps aided by warming boreal forests, settlers planting corridors of trees across the Great Plains, or both—have ventured from their eastern home north through Canada and back south along the Pacific coast. There, the bird’s broad diet gives the larger, aggressive interloper another advantage, enabling it to occupy smaller territories than the Spotted Owl, which eats only tree-dwelling rodents.

Spotted Owls wouldn’t be as vulnerable to the invasive species had people not logged so much old-growth habitat, Sallinger says. To some observers, killing wild animals is an unacceptable answer to those past mistakes. “But it’s even more unacceptable to let a species go extinct,” Sallinger says. “The highest priority needs to be placed on preventing the extinction of the Northern Spotted Owl—including lethal control of the Barred Owl.”

eith Hamm steps out of his truck off an old state highway shrouded in low-hanging fog. Hamm, conservation planning manager for the family-owned timber firm Green Diamond Resource Company, peers through his binoculars downslope where two streams meet among towering tan oaks and cedars. His colleague Desiree Early Dorvall, a soft-spoken wildlife biologist, quickly loads snow-white mice into a container made from a modified PVC pipe. She slides the plastic tube, now squeaking softly, into a pocket of her backpack and begins to trek with Hamm in search of Spotted Owls.

While its business is cutting down trees, Green Diamond’s state- and federally approved habitat conservation plans require it to balance logging with environmental protection. The company clear-cuts some of its property but practices selective harvesting on one-quarter of its 385,000 acres in northwest California to protect streams and wildlife. On parts of its land, from 2009 to 2014 Green Diamond led the first experiment in removing Barred Owls to observe whether Northern Spotted Owls rebounded. They did: Spotted Owl survival climbed roughly 8 percent and reproduction ticked up. Not only did the population on the company’s land stop shrinking—it grew.