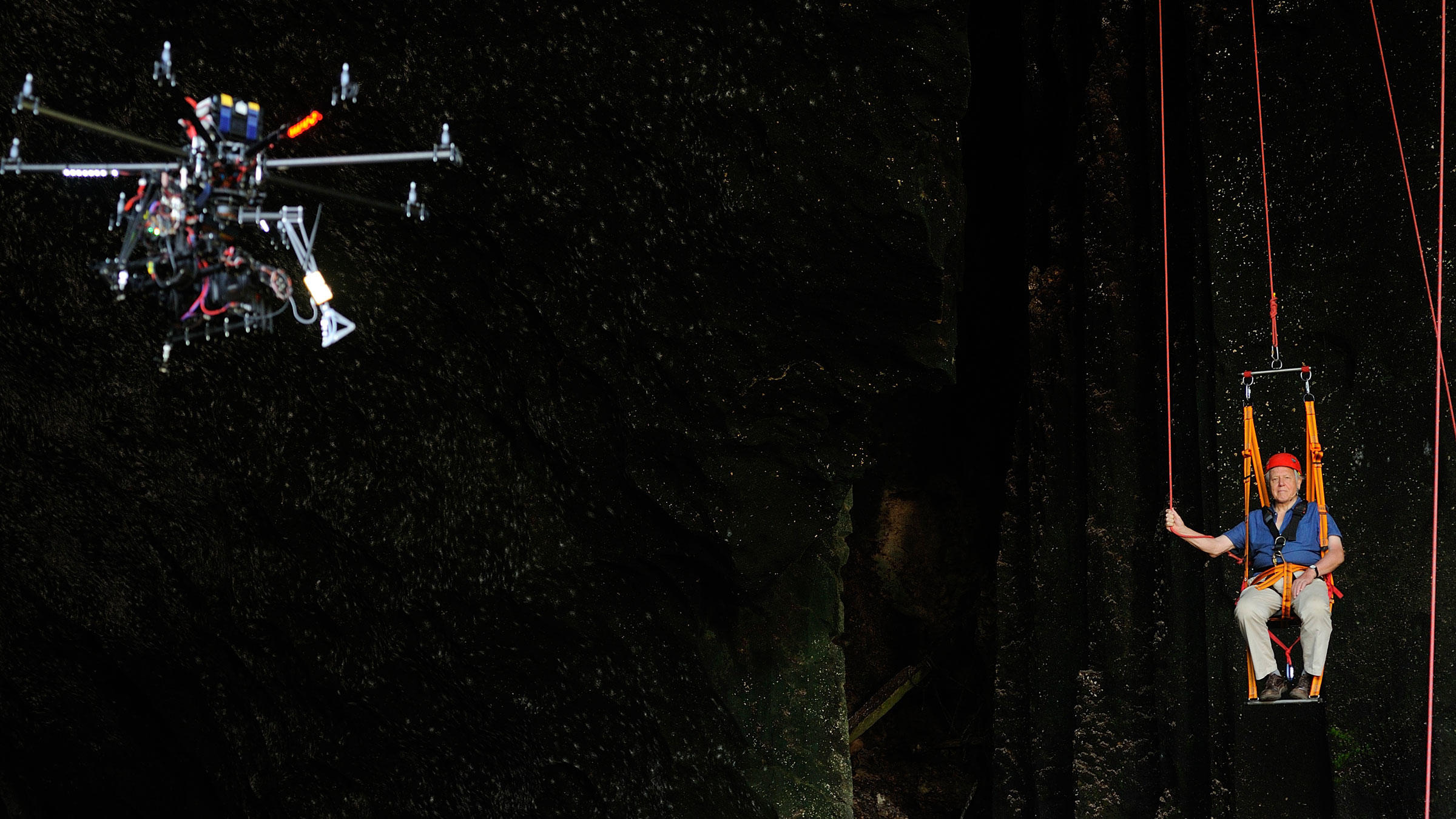 David Attenborough Shows His Wisdom, But Never His Age

The James Bond of wildlife broadcasting still does his own stunts to bring nature to your living room (or mobile device).

David Attenborough may be 88 years old, but you will not find him eating green Jell-O on a Barcalounger. Recently, the octogenarian was braving minus-40-degree weather in Antarctica one day and piloting a glider alongside a digitally rendered pterosaur on another. “Rather more fun than sitting in the corner slobbering, isn’t it?” he teased last June at Wicken Fen National Nature Reserve, near Cambridge, where I found him filming scenes for Conquest of the Skies, a three-part series in 3D about the evolution of flight.

For more than 60 years—in black and white, color, HD, and, recently, 3D—the legendary broadcaster has introduced millions of people to bowerbird courtship displays, lyrebird mimicry calls, and countless other amazing wonders of the natural world. In Britain, where he lives, Attenborough was recently voted the most trusted figure, in a public poll, and is widely considered the “greatest living national treasure.” (He’s also an extinct treasure: A Mesozoic reptile, Attenborosaurus, bears his name.)

Wicken Fen’s meadows and sedge beds make up one of the most species-rich habitats in Britain, and offered an ideal setting for filming dragonflies. Attenborough lay on the grassy bank of a canal beside a foot-long fossil cast of a griffinfly, a giant dragonfly-like predator that conquered the skies during the Carboniferous Period. The sky above was cloudless and warm, and Attenborough wore his signature blue, short-sleeve collared shirt and khaki slacks, in the fashion of a gentleman naturalist.

As the crew from Atlantic Productions aligned the 3D cameras, Attenborough ran a comb through his thick silver hair. By his nature—and that of his work—Attenborough is not one to rely on hair and makeup people. A couple of months earlier, in Borneo, he had gamely offered to hang from a rope 250 feet high inside the Gomantong Caves as a million bats flew past him on a feeding exodus. In Scotland he took part in a high-speed boat chase down a loch with a flock of swans.
“I joke that Daniel Craig always does his own stunts for Bond, and, well, David does his own, too,” said Anthony Geffen, the series producer. “He doesn’t want someone else to.”

When David Attenborough speaks, it is in a soothing, melodic voice that can take the form of an enthusiastic whisper. “Let me tell you, when you’re sitting next to a gorilla, you don’t shout,” he told me.

This day at Wicken Fen, murmuring to himself, Attenborough rehearsed the lines he’d prepared for his “piece to camera,” the classic field bit he is sometimes known to utter while short of breath. Attenborough carefully scripts each program himself, leaning on scientific papers and various specialists, but will often tweak the wording of a line right up until the shot. “He’s careful not to exaggerate things, because then you quickly run out of platitudes—he lets the stories be told by the creatures around him,” Geffen said. “But often he will highlight an extraordinary thing, or he’ll just suddenly think, ‘Well, isn’t that just a better way into the story.’ ”

Attenborough began slowly in his distinctive cadence, as if lecturing to a class of undergraduates. “This is a cast of the oldest fossilized wing yet discovered,” he said to the camera, which was affixed to a 10-foot crane. “As you can see, it looks very like that of a dragonfly. Except that it is . . . gigantic.”

Take two. James Manister, a scientist working with the production company, pointed out that the fossil was in fact the oldest “complete” wing fragment. Attenborough started in again. “It was found in rocks dating from 290 million years ago, in North America. And its owner must have had a wingspan of around 60 centimeters.”

With dramatic flair, he scrunched his face: “It was a monster.”

Even Americans who might reach for the name David Attenborough—“Is that the Planet Earth guy?”—would easily recognize his voice, which has pretty much become synonymous with natural history television. (It has also lent itself to self-parody; Attenborough fans will enjoy the mock narration he did last year, for BBC Radio 1, of a Great Britain-U.S. women’s Olympic curling event: “Off she goes, gently but flamboyantly launching the oversized walnut down the frozen river . . .”)

Across his astonishing career, Attenborough has written, narrated, or appeared in more than 100 programs. Taken together, they amount to an unabridged survey of life on earth—from the planet’s origins to its polar habitats to insects to birds to evolution. But Attenborough’s earliest interest was fossils.

As a child he kept a museum of stones and fossils in his family’s home in Leicester. At 13, purportedly without his parents’ knowledge, he bicycled alone for three weeks to the Lake District and back, on a collecting trip. In grammar school he read about the journeys of the 19th century British naturalists; at 14, he once said, he thought “that the only thing any decent, red-blooded male could want to do in life is climb Everest.” (He has trekked around the north and south poles, and many places in between, but alas, never to the world’s highest peak.) Attenborough went on to study natural sciences at Cambridge but realized he was not cut out to be a scientist. At 26, after a two-year stint in the Royal Navy followed by a spell editing children’s science textbooks, he landed his first job as a BBC producer.

Back then, animal TV programs consisted of a London Zoo employee, under glaring studio lights, describing an animal that he’d plucked from its cage. “These poor creatures looked like oddities—I mean, they looked like freaks,” Attenborough told an audience in 2011. “I thought, why can’t we show the animals in the wild?” Sixteen-millimeter film limited the quality of pictures taken inside a dark rainforest, but Attenborough figured that the BBC could at least film zoo people trapping the wild animals and then describe them later in a studio. Zoo Quest, which pioneered on-location wildlife filmmaking, began in Sierra Leone, where the crew, including Attenborough as the sound recorder, captured a White-necked Rockfowl. When the zoo employee fell sick, Attenborough pinch-hit in the presenter role: In Guyana, he got a close-up with some anteaters; in New Guinea, Zoo Quest was the first to capture a bird of paradise display in the wild. Recalling this a few years ago, Attenborough said: “I thought, what a racket. Wow, if I can play my cards right, I can get away again.”

Today there are few corners of the planet where David Attenborough hasn’t traveled—on his programs, he’s fond of beginning a sentence on one continent and completing it on another—although he’s as happy at his Richmond home, on the outskirts of London, gazing at the ducks and rare plants in his garden pond. Since Jane, his wife of nearly 40 years, died in 1997 of a brain hemorrhage, Attenborough has lived there with his daughter amid displays of fossils, aboriginal art, and books on many subjects. He doesn’t think of himself as a savvy socializer (“I’m not very good at cocktail parties,” he’s said) or a misanthrope (“I’m not obsessed by the natural world to the exclusion of human beings,” he told me). However, there is one human issue that keeps him up at night: Population growth—the world’s numbers have tripled since Attenborough started making programs. He’s affiliated with Population Matters, a U.K.-based think tank, and is outspoken on the issue: “I believe that almost every ill that afflicts the world today can be put down to increasing population size,” he said.

At Wicken Fen, while the cameramen set up another shot on a footbridge by the visitors center, Attenborough sat quietly by himself in a lawn chair under a canopy. He’s still spry, but as he ambled around, slightly hunched and swaying, his body resembled an aging elephant. At his feet rested a black Samsonite briefcase stickered with “DA,” which contained The Times, a handwritten address book, and an outmoded cell phone.

The next scene on the bridge (ultimately scrapped from the film) involved Attenborough describing a prehistoric dragonfly on the railing that would be rendered using computer-generated imagery. Since the mid-1960s, when he ran BBC Two and oversaw the introduction of color television, Attenborough has kept apace with technological advances as a means to tell better, current, unseen stories. For Conquest of the Skies, he wondered at the outset how the producers could get cameras in the air to simulate a true bird’s-eye view. Atlantic Productions then developed, from scratch, a 3-D “octocopter” that holds two cameras side by side, which it says is the first of its kind. “He’s not a gadget king, but I’m constantly talking to him about new technology, and he loves it,” said Geffen, who has made 10 programs with Attenborough, including Micro Monsters 3D, which used fiber-optic cameras. Their next project, about the Great Barrier Reef, will employ satellite photography and cutting-edge underwater cameras. “He’s like a kid,” Geffen said. “ ‘What can it do, let’s have a look at it.’ ”

Take one. Attenborough reached the empty spot on the railing and looked to the camera: “How is it that these ancient dragonflies grew to be that size, whereas no dragonfly today can?” he asked. “The answer seems to be with the air. Or, rather, the amount of oxygen that’s in the air.”

Attenborough’s great talent is in distilling the stuff of lengthy scientific papers into pithy, descriptive sound bites, and telling stories that manage to feel fresh despite the fact that we’ve all seen countless clips of hummingbirds and coral reefs. In Britain, Attenborough programs draw on a certain national nostalgia, but it’s nevertheless remarkable that an 88-year-old in grandpa pants has managed to stay relevant—and as popular as ever—in the age of Finding Bigfoot and Pit Bulls and Parolees (two Animal Planet hits).

The director called for another take. Excusing himself for a moment, Attenborough walked behind the camera and pulled a field guide out of his briefcase.

“Classic David,” remarked Geffen. “This is going across the world, and he wants to make damn sure it’s right.”