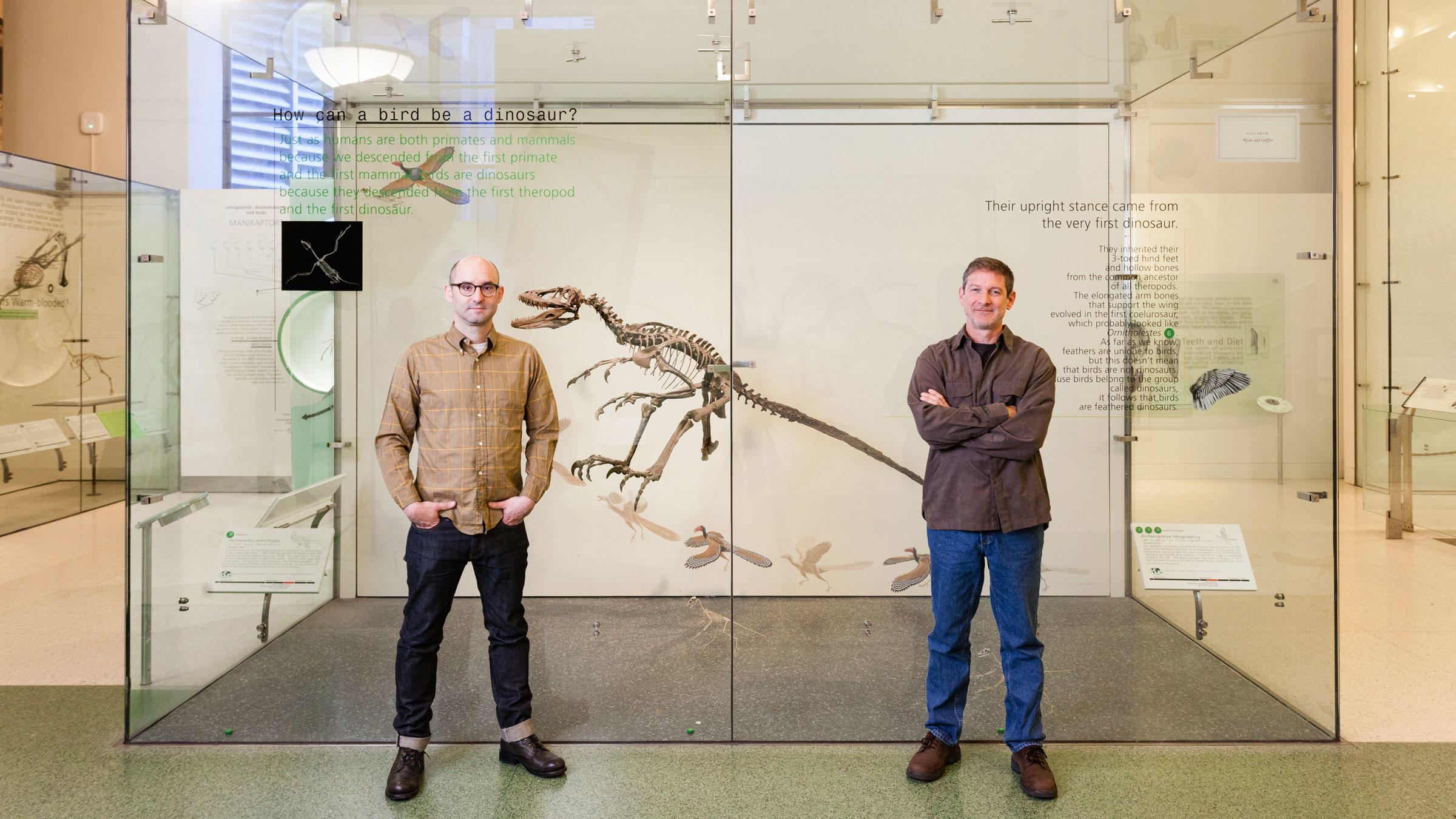 Raising Dinos From the Dead

Mick Ellison and Jason Brougham bring prehistoric creatures back to life. Not in a Jurassic Park kind of way, but through art. Ellison has photographed countless fossils and illustrated dozens of dinosaurs, while Brougham has created life-sized sculptures of everything from pterosaurs to the skull of a mechanical T. rex replica.

One of the biggest challenges the two artists, both employed at New York’s American Museum of Natural History, face is reconstructing Microraptor gui, a pigeon-sized, four-winged dinosaur that lived about 130 million years ago. Microraptor was a non-avian dinosaur (it didn’t survive the enormous extinction event at the end of the Mesozoic), but studying bird-like dinosaurs can help unravel how feathers—and flight—evolved. “We’ve been working on it for years,” says Ellison. “It just keeps changing as more fossils are discovered.”

The first Microraptor fossils, found in northeastern China, were so poorly preserved that nobody realized they had four wings. “It was like someone took a chicken bone and rolled over it with a rolling pin,” says Brougham. Then, in 2000, paleontologists dug up specimens that appeared to have feathered legs. “I remember being completely baffled,” says Ellison, who has been flying to China to photograph such finds for a quarter-century. “At first you don’t accept it. But then more and more fossils were found that clearly show the feathering.”

In 2003 Brougham was tasked with creating two Microraptor sculptures for the museum’s “Dinosaurs (Ancient Fossils, New Discoveries)” exhibit, which is still touring the country. He pored over Ellison’s photos, created the models, and went back and forth with the curator, paleontologist Mark Norell, and then-researcher Xu Xing on every detail. “I really wanted to make it look like a living animal, not like a monster or a cartoon,” he says. “It’s hard to make it look real because it has four wings, and there’s nothing like that alive today.”

Microraptor might have climbed trees, so for feather coloration, Brougham looked to flickers for inspiration. “I figured if I started with a real bird, I knew I was within the range of possibility,” he says. “Then I had to change it slightly to not be a dead ringer for a living bird.” Everyone was pleased with the outcome.

Fast-forward to 2012, when Brougham learned that his best guess for the color pattern was just one of the things he’d gotten wrong. In the intervening years, a Chinese scientist had unearthed a complete skull, revealing that the snout was longer than previously thought. Ellison was working on a Microraptor illustration to accompany a Science paper, piecing together the anatomy from thousands of photographs he’d taken of dozens of fossils. Close examination revealed they’d had the tail wrong, too. It didn’t end in a wedge but in two long plumes—the earliest known example of a sexual display in a feathered creature. “Then came the really big discovery,” says Ellison: The bird had black, iridescent feathers, determined by analyzing preserved pigment-bearing organelles called melanosomes. So much for the flicker pattern.

Numerous mysteries remain: Was Microraptor a tree dweller, and did it need elevated perches or could it just leap into flight from the ground? Did it fly, or merely glide? And what, exactly, did Microraptor do with its hind wings in the air? Did it spread them wide, hold them back parallel with its tail, or hang them down from its body? A couple of years ago Ellison and Brougham joined a team trying to get to the bottom of that enigma by flying Microraptor models in a wind tunnel at Harvard. One had a good glide ratio with its legs down, but the results were inconclusive. “It’s a question that drives everybody crazy,” says Brougham.

As paleontologists make new discoveries, Ellison, Brougham, and their ilk will translate the findings into art. They’ll spend months on the endeavor, knowing that as close as they think they’re getting to how the animal looked all those aeons ago, they may never get it right. But who knows, maybe they’ll discover the Microraptor holy grail. “I just know there are exquisite specimens, probably in a drawer somewhere, that are going to answer all the questions of what, exactly, this animal looked like,” says Ellison. If they ever materialize, you can bet he'll be on the first plane.

Editor’s Note: Read more about the relationship between dinosaurs and birds from Audubon Magazine: Which Came First: The Dinosaur or the Bird? and Did Dinosaurs Have Feathers?