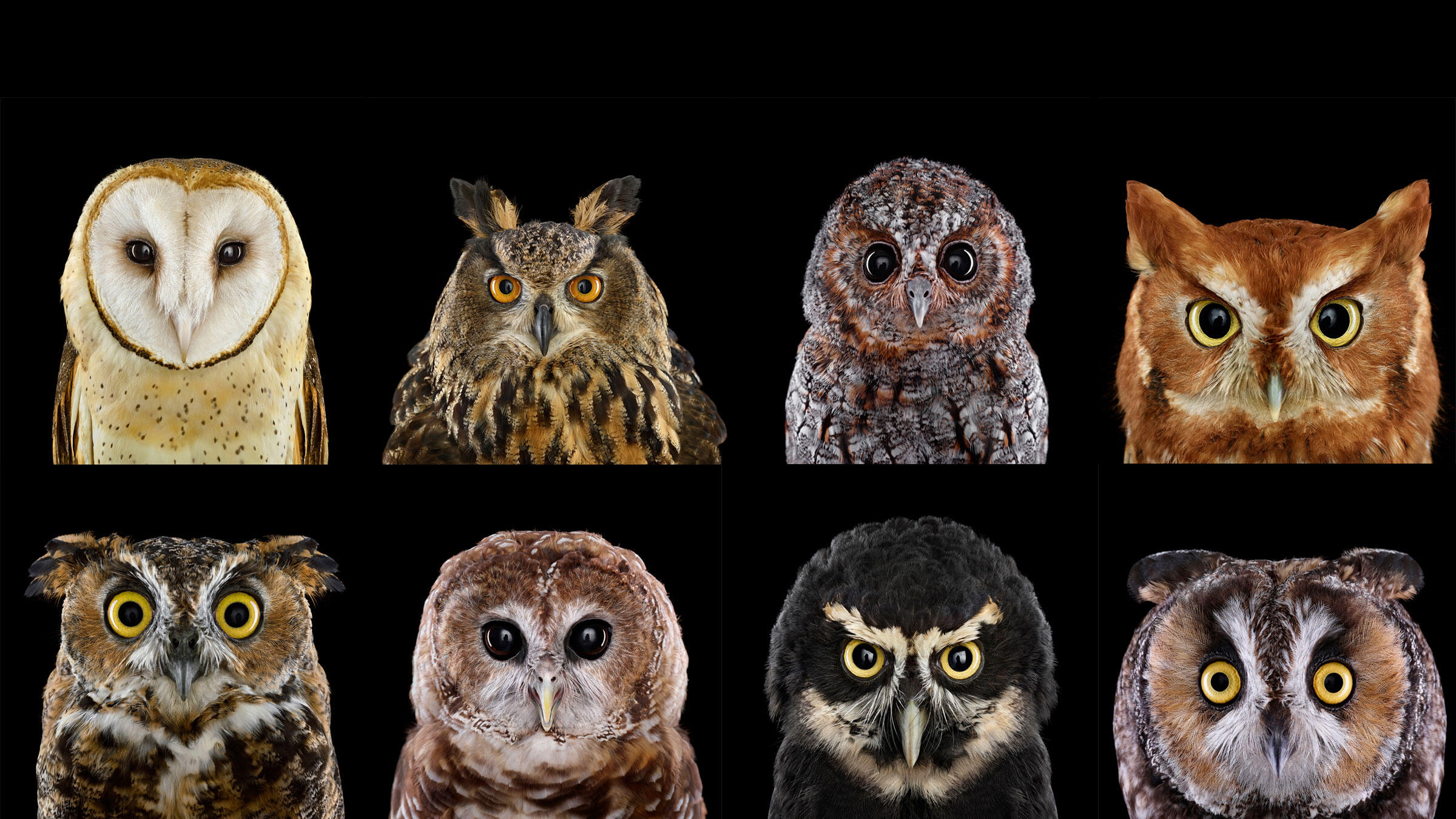 It’s not easy to get owls to mug for the camera. Even in captivity the birds remain aloof, unruffled by the flash and unmoved by attempts to bribe them. Photographer Brad Wilson learned that lesson firsthand after trying to win over owls from the World Bird Sanctuary in St. Louis and The Wildlife Center near Española, New Mexico. He spent hours with each bird, trying to capture its direct gaze. “It’s hard to get animals to look at you like humans do,” he says. “That shot became my holy grail.”

Wilson is an expert at point-blank portraits. His series “Affinity” features 65 species, including a white rhino, a white tiger, an Arctic fox, and an Egyptian Vulture. But owls were the most compelling and challenging subjects, he says. It takes years of building mutual trust before an owl will accept physical contact from a single person, says Wilson, and “owls don’t extend that privilege to other humans.”

Wilson wanted his images to accentuate the nobility and independence of each captive bird, minimizing its dependence on its caretaker. Many had wing injuries, for example, which he concealed in his pictures. The owls’ human perches likewise hid themselves, contorting their bodies to stay out of the frame. It was a gesture to the birds, a way of saying that although their wild days are behind them, they still have their dignity.

Size: 7-9 inches tall; less than half a pound

Range: Southeastern Alaska through western Canada and the western U.S. to central Mexico

The Western Screech-Owl plays host to a surprising houseguest: blind snakes—worm-like reptiles that dwell underground—that the owls ferry, live, back to their nests. This unlikely act of mercy is actually a child-rearing strategy: Parents that share their nests with the strange bedfellows have better success at raising young. That’s because the snakes devour pests like ants and flies, whose larvae consume food reserved for owlets.

Range: The world’s most cosmopolitan owl, nests on six continents but avoids the northernmost reaches of North America, Europe, and Asia

The constellation of spots that spreads across the Barn Owl’s head and décolletage are not just ornamental: The more spots a female has, the more resistant she seems to be to parasites, and the more attractive she is to males. A seemingly supernatural ability to pinpoint noises and spot prey in low-light and even blackout conditions, coupled with near-soundless flight, makes these owls the perfect night stalkers.

No bird is safe from the Eurasian Eagle-Owl—not even its kin. The mighty strigiform goes after Tawny and Snowy owls, as well as such larger birds as Gray Herons. On China’s alpine meadows, the eagle-owl and the Upland Buzzard hunt the same voles and beady-eyed pikas. The buzzards conduct their business by day; the owls take over after dusk. With its 6.5-foot wingspan, it’s also been known to hunt foxes and fawns.

Range: East of the Rocky Mountains, U.S. to northeastern Mexico

The Eastern Screech-Owl can thrive in the most chaotic urban environments. It is one of the few raptors to live in New York City, including in Central Park, in the middle of Manhattan, where the species was reintroduced. To coexist so closely with civilization, the screech-owl has learned to skim off songbirds at feeders and squat in human-created crannies. Still, the street-smart bird remains secretive, stymying ornithologists eager to learn more about it.

Range: Common in summer from southwestern Canada through the western U.S. to Mexico; winter range in Mexico is poorly known

The Flammulated Owl’s husky voice doesn’t quite fit its pint-sized body. It can slow down its vocal vibrations by slackening the layers of skin around its throat, creating a low-pitched hoot. In spring and summer the owl idles in western mountains, feasting on insects. It was once thought not to migrate, but its insectivorous habits and recent studies showing that it’s unable to go into torpor, or mini hibernation, confirm that it travels south in winter.

Range: All of continental North America and much of South America

Great Horned Owls are natural foster parents. A single female in captivity has been known to play surrogate to more than a hundred owlets in her lifetime. In the wild these birds are just as nurturing, with females keeping constant tabs on their young. When it comes to territoriality, however, tenderness turns to ferocity. Couples will fend off neighbors through hooting contests, and even set upon them with fistfuls of talons.

Size: 15 inches tall; half a pound

Range: North America, Europe, Asia, and locally in North Africa, with some wintering south to Mexico and southern China

The Long-eared Owl is a frequent target for other birds of prey, including Great Horned Owls and Barred Owls. When facing a formidable threat, it has a few tricks up its wing. It might pull in its plumage and stand up straight, elongating its body to look more imposing. The small owl may also sway side to side, feign an injury, or flop around its nest while screeching owlish imprecations.

Range: From Mexico north through Arizona and New Mexico to Utah and Colorado

Of the three Spotted Owl subspecies, the Mexican is the rarest one in the U.S. Highly localized within its wide range, it seeks out cool, shady canyons, often in areas surrounded by the hot, dry slopes of desert mountains. It doesn’t breed every year; when it does it prefers spacious tree hollows in old-growth trees. If such sites aren’t available, the bird will adopt secondhand nests of other birds or occupy shallow caves in canyon cliffs.

Range: Mexico and Central America to the northern two-thirds of South America

The Spectacled Owl has little to fear from predators, since it roosts in the canopies of rainforests and gallery woods, where assailants are few. It eats almost anything; during one lurid encounter in Panama, one slaughtered a three-toed sloth, then feasted on its mangled body. The bird is aptly named for the bandit-like mask around its eyes—black spectacles on a fleecy white head for the young, white frames on a dark head for adults.

How Baby Owls Nap Without Falling From Their Trees

It's all about that toe strength.

How Falconry Turned One Man's Life Right-Side Up

After spending his childhood on the mean streets of D.C., Rodney Stotts found new purpose as a raptor expert and role model for school kids.