Note: Following this piece on whooping cranes in the May-June issue, a loyal reader registered disappointment that I hadn't mentioned the tremendous contributions of George Archibald and the International Crane Foundation in establishing the captive-reared flock that now migrates between Wisconsin and Florida (see "The Man Who Saves Cranes"). So I'll take this opportunity to credit Archibald and the foundation for their heroic work. And special thanks to the foundation for being part of the successful lawsuit that has given the wild population a fighting chance by protecting the vital freshwater inflow to their winter habitat. —T.W.

On the cold, misty morning of February 12, 2013, Iliana Peña, conservation director for Audubon Texas, and I are trying to feel good about the future of whooping cranes. In Captain Tommy Moore’s metal birding boat, Skimmer, we are cruising the Intracoastal Waterway inches from the western shore of the Aransas National Wildlife Refuge on the Texas Gulf Coast. With us is Wade Harrell, whooping crane recovery coordinator for the U.S. Fish and Wildlife Service.

In 1937 President Franklin D. Roosevelt designated the refuge, thereby protecting the 47,200-acre Blackjack Peninsula between Aransas and San Antonio bays. Since then it’s grown to 115,000 acres and been named a Globally Important Bird Area. Today the refuge helps sustain somewhere between 178 and 362 whooping cranes, up from 15 in 1941. The Fish and Wildlife Service thinks the number is probably around 257 but can’t say for sure because it has come up with a controversial new system of estimating rather than counting. These birds migrate from breeding grounds in northern Canada to wintering habitat here in south Texas. 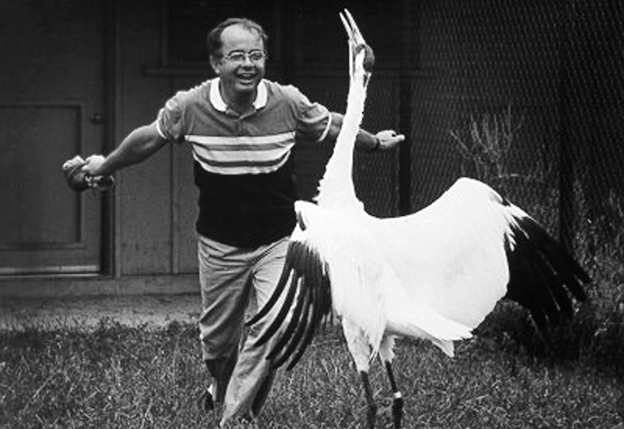 A second population of about 100 whoopers, started with captive-reared birds fed by volunteers and aviculturists in crane costumes and imprinted to follow ultralight aircraft, migrates between Necedah National Wildlife Refuge in central Wisconsin and Chassahowitzha and St. Marks National Wildlife Refuges on Florida’s west coast. They’re doing well in the wild but reproduction is low. A non-migratory flock established at Kissimmee Prairie Preserve State Park in south-central Florida seems to have failed, but another of about two dozen in southwest Louisiana shows great promise.

During the past 70 or so years the naturally migrating population has increased at an average of 4.5 percent annually. Still, Peña and I have a bad feeling about the onslaught of new threats in Texas—climate change that is flooding salt marshes and bringing habitat-wrecking black mangroves up from the south, and coastal development, drought, and water withdrawals from the Guadalupe and San Antonio rivers that have raised salinity in bays and estuaries, thereby killing the blue crabs and other invertebrates that sustain the cranes. A recent federal court decision may have resolved the water-withdrawal issue, but persistent drought, possibly related to climate change, remains a concern.

Even on dark days, birders have to work to sustain dark moods in the Aransas National Wildlife Refuge. Opening the show for us and eliciting smiles from all hands are reddish egrets dashing around the marsh, hopping and changing direction like Keystone Kops. A seaside sparrow carols from his spartina perch. Great blue herons in astonishing profusion hunch, puff, and preen. Ospreys hover and perch on buoys. Great and snowy egrets stalk salt ponds and scull overhead. White pelicans in tight clusters roost on sandbars. Brown pelicans fold their wings and dive. A northern harrier wobbles low over the marsh. Patrolling the wet flats are dunlins, marbled godwits, willets, long-billed curlews, dowitchers, oystercatchers, avocets, greater yellowlegs. A white-tailed hawk amiably shares a roost with seven great blue herons. Bottlenosed dolphins roll in our wake and bow wave. Are we really getting paid for this? Peña and I ask ourselves.

Although whoopers are the tallest birds on the continent (five feet high when they stand erect), they dwell in low vegetation, better to spot predators. So the refuge’s high, brushy western shore, rife with bobcats, coyotes, and feral hogs, is a write-off. But the vast eastern marsh is whooper heaven. Dominant plants include pickleweed, spartina, and inland salt grass. Early in the season cranes feast on wolfberries—fleshy red fruits clustered on water-tolerant shrubs.

“Whoopers,” announces Captain Moore over the loudspeaker. There are two adults 100 yards out. They are nearly a third bigger than the nearby great egrets and great blue herons, bigger even than sandhill cranes. Through our binoculars we can see their yellow eyes, red-black cheeks, and bald, scarlet crowns. It seems impossible that feathers can be this white. Their tail plumage is short but luxuriant, pointing down unlike those of so many other species. They strut and probe, lifting their black legs like dressage horses. It’s easy to see why these birds have become North America’s inspirational symbols of conservation, capturing our hearts and minds.

"The variance [between high and low estimates] is more than we would have liked,” he told Peña and me. “We’re trying to work on ways to narrow it. I think the new method is moving us in a direction where we can get a more precise estimate of birds.”

The 2012-2013 estimate, released five days after Peña and I left south Texas, doesn’t inspire confidence. It’s somewhere between 178 and 362 birds—probably around 257, says the service. But Harrell had told us something that goes a long way toward justifying his agency’s position: “When you have new staff come on board, you need a way to be consistent so there’s data you can compare from one year to the next. For the first time ever we have a written protocol I can hand other biologists so they can understand exactly how we fly surveys.” That’s an essential element. There are, alas, no more Tom Stehns.

“Tom did a complete census; he knew the birds for decades, had an incredible knowledge of what to expect,” says the Gulf Coast Bird Observatory’s Chavez-Ramirez. “New people can’t do that. On the one hand, we need a standard technique, but the new protocol doesn’t collect the additional information that Tom’s census did—like potential mortalities. We need to find other ways to gather that information.”

The Texas Commission on Environmental Quality, the same outfit that had been degrading the native ecosystem that supports humans and whooping cranes in Aransas and San Antonio bays, reports that similar water withdrawals have destroyed the economic and ecological viability of Nueces Bay, near Corpus Christi. This once-rich estuary now produces far fewer oysters, crabs, and shrimp.

When it hasn’t been corrupted by gross freshwater diversions, San Antonio Bay, which contains the Aransas National Wildlife Refuge, annually has fed the local economy with $1 million from crabbing, $6 million from recreational fishing, $17 million from oystering, and $30 million from shrimping. And that doesn’t take into account the living resources in Aransas Bay or trade in fuel, food, and equipment.

“Texas has a water system based in the 1900s,” declares Blackburn. “And we’re dealing with 21st-century problems.” That system has been killing cranes. But if the recent court victory by the Aransas Project and its allies survives appeal, at least the Guadalupe- San Antonio River system will be dragged into the 21st century. So the whooping crane’s future is suddenly brighter.

Unfortunately, however, the 21st-century problems aren’t confined to the wintering grounds. Migrating whoopers stop near or in tar sands strip mines and tailing ponds, and lately they’ve been showing up with feathers fouled by black material. While the contaminant has yet to be positively identified, tar sands waste is the prime suspect. And rapidly proliferating wind-turbine projects along the cranes’ migration route threaten flying birds and, worse, destroy stopover habitat.

So the message for the nation’s bird lovers, local shrimpers, fishermen, and coastal residents is this: Rejoice briefly at a major win, then focus on the future. Start advocating everywhere for intelligent water management and whooping cranes, and start planning a winter trip to Aransas National Wildlife Refuge.

Learn more: Google “Texas Whooper Watch” and learn how you can help managers increase their knowledge of crane behavior and identify migration stopover sites, nontraditional wintering areas, and new threats. For the latest information, go to tx.audubon.org and fws.gov/refuge/Aransas.

Take action: Learn more about the Aransas Project and how you can get involved on behalf of whoopers at thearansasproject.org.

Get inspired: The best way to save whoopers is to go see them in the wild. To observe them in the Aransas National Wildlife Refuge, contact Captain Tommy Moore’s Birding and Kayak Adventures in Rockport, Texas, at 361-727-0643.