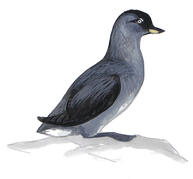 A couple of days after Christmas, Carl Haynie and his wife, Terry Risdon, made the three-hour drive from their home in Sammamish, Washington, to the same remote beach they’ve visited every month for five years. They passed through the Seattle suburbs, hugging the rugged coast to reach their isolated, one-kilometer stretch on the Olympic Peninsula. Haynie and Risdon are beach bird monitors, two of the more than 1,200 volunteers who patrol shores from California to Alaska, recording any dead birds that wash up in their survey zone.

Haynie, a software developer and longtime birder, likens the outings to treasure hunts. “You never know what you’re going to find.” He’s spotted carcasses of such rare birds as Pink-footed Shearwaters and Black-footed Albatrosses, and deduced the identities of 40-plus species by a wing, head, or foot alone—sometimes all that’s left. But the pair had never seen anything like what awaited them that December day.

Dark bumps peppered the beach. Walking over to one, they realized the coast was littered with dead Cassin’s Auklets. The softball-size seabirds showed little wear and tear, despite having been spit out of the ocean and rolled across the sand. Risdon began picking up carcasses; after a quarter-mile her bucket was overflowing. By the survey’s end, they’d collected 62 auklets. “It was pretty crazy,” recalls Haynie. “We’ve found dead birds before, but never more than 20 in one go. And we’ve never seen more than two Cassin’s.”

Worse, it turned out their stretch wasn’t the only beach seeing record numbers of dead Cassin’s. Since October, in what biologists are calling an unprecedented die-off, thousands of the birds have washed ashore, from central California north to British Columbia. Dozens of experts from disciplines as wide-ranging as oceanography, pathology, and climatology—plus the volunteer army—are working together to gather pieces of the puzzle. As of early February, when Audubon went to press, the wreck was still unfolding, and the primary culprit was thought to be something the scientific community dubbed “the blob.”

Every avian species that winters at sea inevitably suffers losses, especially after big storms. But when Cassin’s started washing up, people took notice. It’s not that the birds are endangered—not even close. Their global population is 3.5 million strong. It’s all about what they eat. These diminutive birds dine largely on zooplankton, tiny marine creatures near the bottom of the food chain. “That makes them a very useful ecological indicator,” says Bill Sydeman, a senior scientist at the Farallon Institute, a marine ecology nonprofit; he’s been studying Cassin’s for three decades. “If ocean conditions change, auklets might be an early warning sign.”

It became clear that something was up in late October, when volunteers began reporting seeing 10 to 100 times the normal number of Cassin’s bodies. “That’s a lot,” says Julia Parrish, a University of Washington seabird expert who launched the Coastal Observation and Seabird Survey Team (COASST), whose 700 volunteers include Haynie. “That doesn’t actually translate into knee-deep in bodies, but in the stretches with the highest number of birds—350 per kilometer, probably the highest wreck value we’ve seen in the Lower 48—you’re only going a few steps before you see the next one.”

Because the birds usually sink or are eaten before they wash ashore, Parrish estimates that in addition to the 3,500 recorded on land, tens of thousands more have died and disappeared at sea.  Cassin’s seem to be the only seabird affected. “It’s curious,” says Parrish. “If the bottom was falling out of the food chain, we might expect to see a wide variety of species stressed. It could be that Cassin’s are dying out early.”

By November experts had a solid grip on the magnitude and extent of the wreck, thanks to the volunteers from American and Canadian beachcomber groups. But they still didn’t know the cause. That requires corpses—the fresher, the better.

An email asking COASSTers to collect dead Cassin’s was on Diane Bilderback’s mind when she went to survey her stretch near Bandon, Oregon, on November 22. A volunteer since 2006, Bilderback figured she might be busy, because a big storm had hit the night before. The surf was huge that day, the waves capped with thick sea foam whipped up by the water. Bilderback watched an auklet tumble onto the beach. “I could tell it was still alive,” she says, “but not for long.” She kept walking. When she returned 20 minutes later, it was dead.

With gloved hands, Bilderback placed the bird in a Ziploc bag, following instructions outlined by the U.S. Geological Survey’s National Wildlife Health Center in Madison, Wisconsin, where the auklet was headed. At home she transferred it to the best place to keep it cool: her refrigerator. On Monday she packed the chilled carcass in a Styrofoam cooler lined with icepacks, boxed it up, filled out the paperwork, and took the package to FedEx (the go-to folks for transporting animals, including live pandas and sea lions). Tuesday the auklet arrived on schedule.

If there’s an American wildlife mystery in the air, the scientists at the National Wildlife Health Center are likely on the case. They identified the deadly fungus that causes white-nose syndrome in bats. They proved that the “aflockalypse,” when thousands of blackbirds fell from the sky four winters ago, wasn’t caused by an environmental catastrophe but by New Year’s fireworks (spooked birds crashed into stationary objects at night and died). And last winter they figured out that West Nile virus, typically seen in summer, killed 20,000 Western Grebes in Utah.

When Bilderback’s auklet arrived, wildlife pathologist Julia Lankton got to work. In a pressurized necropsy room built to contain the nastiest diseases, Lankton swabbed the bird’s mouth and cloaca before examining the feathers, skin, mouth, eyes, and ears for trauma or lesions. Everything looked intact, just like with the dozen-plus other Cassin’s she’d received. She opened up the bird, cutting into its white-feathered belly. She removed each organ, and took tissue samples for viral, bacterial, fungal, parasitic, and toxicological tests, some of which can take weeks (“not exactly the 50 minutes people expect from watching CSI,” she says).

Lankton’s findings confirmed what pathologists in California and Oregon had found. “Most are juveniles born this year,” she says. “They’re emaciated, and very rarely have we found any food in their stomachs.” Food loss might have prevented the birds from feeding actively, but Lankton couldn’t rule out an underlying disease or toxin that’s messing with their ability to find food. The final diagnostic test results are due in February.

Still, she’d uncovered important clues: Every bird was starving, and most were young-of-the-year. “We think it’s involved with copepods and krill [the zooplankton Cassin’s eat] and the really unusual ocean conditions we’ve seen this year,” says the Farallon Institute’s Sydeman. “But we don’t know how it all fits together.”

That’s where the blob comes in.

“The blob” is the name Washington climatologist Nick Bond gave to the enormous, anomalously warm, 100-meter-deep mass of water that formed in the Gulf of Alaska in early 2014, due to abnormally weak winds in the North Pacific. Another one formed off Baja California last year. And the typical upwelling of cold, nutrient-rich water off the West Coast never materialized last summer because a low-pressure trough between California and Hawaii weakened the winds that drive the process. “It’s been a weird year,” says Nate Mantua, a climatologist with NOAA Fisheries. “Water temperatures have been 5 to 8 degrees Fahrenheit warmer than usual from British Columbia to California starting about midsummer, and I don’t have any good explanation about why this happened.”

Mantua says he can’t link the blob’s  formation to human-induced climate change, and predictions of a strong El Niño—which carries tropical waters north—were wrong. “It’s not unprecedented,” Mantua says of the warming, “but it is up there with the extremes in historical records.”

While the warm water brought rare visitors, including Band-rumped Storm-Petrels and pygmy killer whales, it doesn’t support the energy-rich zooplankton communities that Cassin’s eat. Bill Peterson, an oceanographer with NOAA Fisheries, samples copepods twice a month. When local winds died down in late September and the blob moved in, “copepod species I’d never seen in my life showed up off the Oregon coast,” he says. Unlike the boreal copepods—“big, full of lipids, and they make everybody that eats them fat”—these tropical ones are “skinny.” He suspects that the blob drove the krill too deep for auklets to reach, and flushed the “fatties” out of the area.

Jaime Jahncke, a biologist with the California nonprofit Point Blue, saw something similar happen off central California. “In September, instead of getting krill in our nets, we were getting gelatinous zooplankton, which Cassin’s don’t eat,” he says. “It was a dramatic change from what we saw earlier in the year, and in previous years.”

Jahncke and Peterson’s observations hint that the Cassin’s prey was likely diminished all along the West Coast in the fall. Another important fact: 2014 was a banner breeding year for Cassin’s, both in British Columbia, where three-quarters of the population nests, and in the Farallon Islands, off San Francisco. “We’ve got a lot of young, inexperienced, naïve birds out there right now,” says Mark Hipfner, a seabird population research scientist for Environment Canada’s Wildlife Research Division, who directs a program in B.C. that monitors about half the world’s Cassin’s. “If conditions get tough, these are the birds likely to succumb first.”

For now the scientists working the Cassin’s case can do little more than wait. Hipfner says he can’t gauge the full extent of the wreck until the adults return to breeding colonies. If the die-off largely hit young birds that haven’t reached breeding age, it shouldn’t cause long-term damage to the population, he adds.

As for whether other species are suffering, nobody knows yet. Several scientists said a lag effect going up the food chain might surface. They’ll keep a close eye on other seabirds, small fish such as anchovies, and juvenile salmon (krill eaters already suffering from the drought plaguing the West).

In the meantime, Mantua, the NOAA climatologist, says waters off the West Coast likely won’t cool soon. The high-pressure system—with less wind and fairer weather favorable for the blob—is persisting, so the North Pacific is staying warm.

As for beachcomber Carl Haynie, he was heartened by his January 19 survey, which turned up only 14 Cassin’s. “My god, I hope it’s finally dying down.” He’s concerned for the birds, of course. But the treasure-hunter in him is also ready for the next mystery.