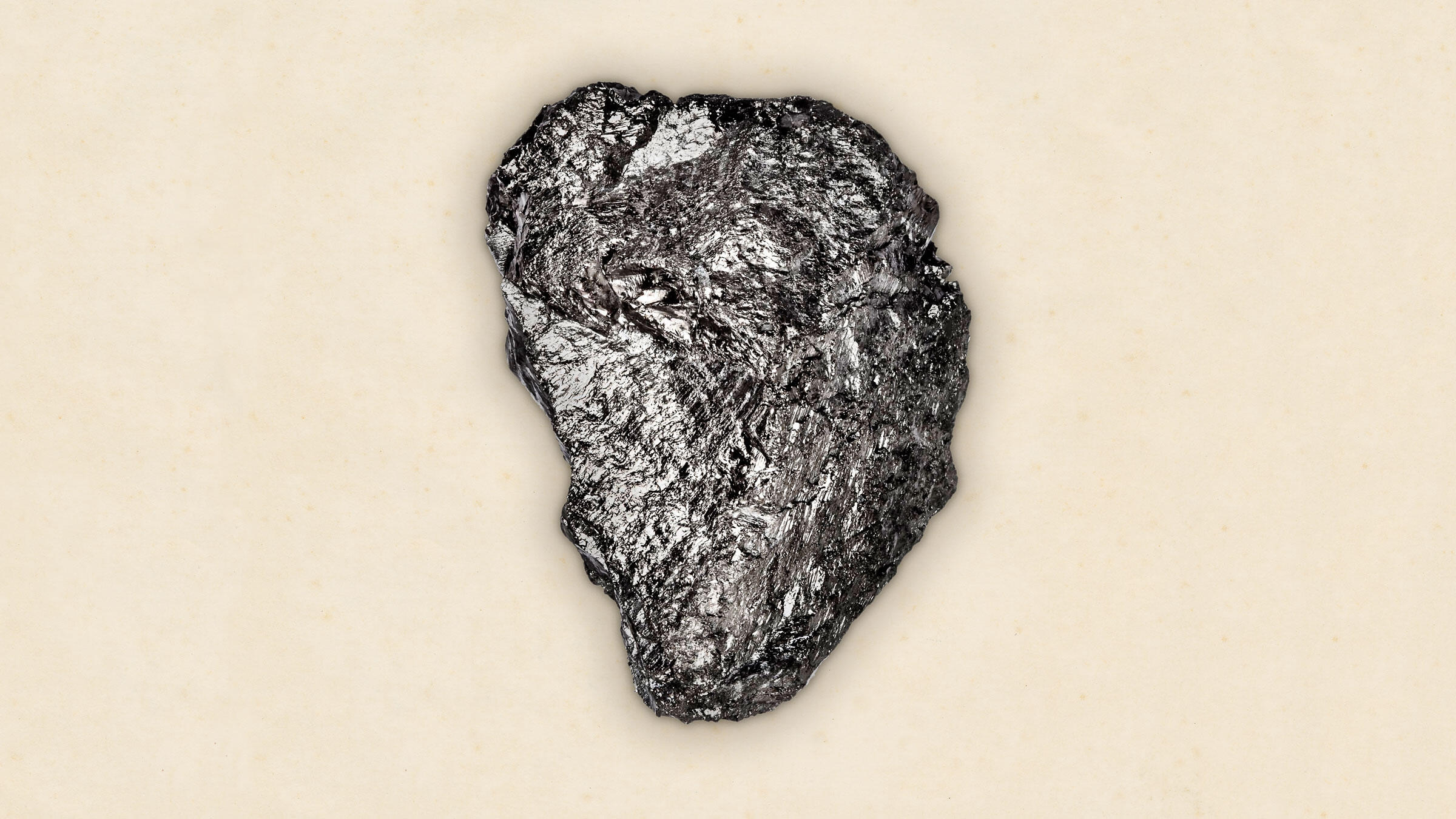 A lump of Anthracite Coal from a coal mine in West Virginia. Photo: Dan Winters

Here’s the Ugly Mess Coal’s Decline Could Leave Behind

Some of the biggest companies haven’t been setting aside resources to clean up their mines, and the Interior Department is stepping in.

When Arch Coal filed for bankruptcy in January, it was just the latest sign that the coal industry is facing a serious problem. In the past year, four major coal companies have filed for Chapter 11, crippled by massive debt and falling demand. And this may be just the beginning: A recent report from the consulting firm McKinsey & Company concluded that the industry is in for a painful contraction and is “still in the early stages of what could be decades of financial difficulty.”

To anyone concerned about climate change, the prospect of a shrinking coal industry is welcome news. But it may come with a troubling consequence, thanks to a provision in the federal Surface Mining Control and Reclamation Act (known as SMCRA) that has allowed some of the biggest coal companies to avoid setting aside funds to clean up their mines. Now, with the industry’s future looking bleak, concerns are growing about the possibility that if we want to see massive mine sites filled in, vegetation replanted, and polluted waterways restored, taxpayers could end up footing the bill.

Coal companies are supposed to clean up after themselves, and SMCRA, which was passed in 1977 to put an end to more than a century of mine abandonment that had scarred more than a million acres of land, includes bonding requirements to ensure that companies can’t shirk their obligations. “The most fundamental protection offered by the federal and state surface mining laws,” says Peter Morgan, an attorney with the Sierra Club, “is the requirement that not a single shovelful of dirt can be moved on a coal mine until the company has posted a reclamation bond adequate to allow state regulators to finish reclamation, should the company liquidate or cease to exist.”

But some producers have taken advantage of an option called a “self-bond.” Reserved for companies that can pass certain financial tests, self-bonding amounts to a legally binding promise that when the time comes for reclamation, the company will have the cash on hand to cover the costs.

Coal companies like self-bonding because it lets them avoid putting up collateral or paying a fee to a surety company. “This is a big giveaway for the industry,” says Shannon Anderson, an attorney with the Powder River Basin Resource Council in Wyoming. More than $3 billion in coal-mine reclamation liability is self-bonded today, two-thirds of it in Wyoming, where 40 percent of U.S. coal is mined.

The problem is that the self-bonding system was designed for a financially robust industry, and now its risks are starting to become apparent. Right now two of the biggest coal companies in the United States, Arch and Alpha Natural Resources, are in Chapter 11 bankruptcy. And each of those companies holds hundreds of millions of dollars of self-bonded reclamation liability, Arch’s in Wyoming ($485 million), and Alpha’s in Wyoming ($411 million) and West Virginia ($244 million).

If it seems perplexing that companies on the verge of bankruptcy would qualify for a system premised on financial fitness, well, that’s the problem. Self-bonded companies must pass regular stress tests, so in theory if a company is in trouble it will fail its test and will have to replace its self-bonds with surety or collateral bonds. But things haven’t quite worked out that way. Last summer, prior to Alpha’s declaring bankruptcy, regulators in Wyoming and West Virginia did tell the company that it no longer qualified for self-bonding and instructed it to substitute its bonds. But it was too late; in August, before the substitution deadline was up, the company filed for Chapter 11, its reclamation bonds still unsecured. And in the case of Arch, the company still qualified for self-bonding in the eyes of Wyoming regulators even as it entered bankruptcy. That’s because of a loophole in the law that allows parent companies to submit the financials of a subsidiary for scrutiny instead of those of the company as a whole. According to Reuters, Arch Coal's SEC filings show that the company hasn't met the self-bonding qualifications itself since 2012.

Both Alpha and Arch have continued to operate as they try to restructure their debt and climb out of bankruptcy. Even if they do so successfully, if the industry continues to decline as predicted, these surely won’t be the last potential bankruptcies we see. Many analysts predict, for instance, that Peabody Energy, which as of last March held nearly $1.4 billion in self-bonds in Wyoming, Illinois, New Mexico, Colorado, and Indiana, will be next. In any event, in the long term not all companies will be able to stay afloat.

What would happen if a self-bonded company were to liquidate and abandon its mines? This is uncharted territory, so no one really knows. “The statute was set up in a way that, in theory, it could never happen,” says Mark Squillace, a professor of natural resources law at the University of Colorado. The state could get in line in bankruptcy court to make a claim, but it “would definitely fall behind all of the company’s secured creditors,” says Morgan. States could get a priority claim on something—for example, in the Alpha and Arch bankruptcies, regulators in Wyoming and West Virginia have struck deals that would entitle the states to a certain amount of money should those companies go bust. But in each of those deals the funds the state has secured amount to less than 20 percent of the company’s actual liability. (West Virginia does have its own reclamation fund it could tap, though John Morgan, a member of the fund’s advisory council, says it could be “significantly challenged” by a large liability.)

To prepare for the eventual possibility of unreclaimed mines, Anderson says Wyoming could look to another source: the federal Abandoned Mine Lands Fund. AML Fund money is meant to be used for the reclamation of lands mined in the pre-SMCRA era, distributed to states as a grant. But in Wyoming, where the worst old mine pollution has been largely cleaned up, the state has wider latitude with the funds, and Anderson argues that the state could potentially work out an arrangement to establish a trust for future cleanup costs. But the state legislature has so far taken no steps in that direction—of the $241 million in AML Funds Wyoming is set to receive this year, the spending bill currently before the legislature would put about $70 million toward ongoing pre-1977 mine reclamation work, while about $160 million would go toward funding highways—including $24 million to relocate roads in order to help coal companies access new mining areas.

With the hazards of the self-bonding system becoming increasingly obvious, the Interior Department’s Office of Surface Mining Reclamation and Enforcement is now stepping in, setting the stage for a potential showdown with state regulators. In January, in its first real action on the matter, OSMRE sent notices to the Wyoming Department of Environmental Quality questioning whether Alpha and Arch were operating with sufficient bonding in place, and the following month it sent similar notices about Peabody to Wyoming, New Mexico and Colorado. In its official responses to the Alpha and Arch notices, the Wyoming DEQ acknowledged “certain systemic problems” but strongly defended its oversight and maintained that both companies were in compliance with bonding requirements.  It also added that “having cleared the low bar of rationality and lawfulness, OSMRE is not permitted to second-guess the wisdom of DEQ’s settlement agreement." (Regulators haven't yet responded to the Peabody notices.) It remains to be seen what OSMRE’s next move will be, but Interior Secretary Sally Jewell has signaled that she doesn’t plan to back off the issue, telling reporters last week that “we need to make sure that those companies are held accountable.”

But how?  Regulators in Wyoming and West Virginia say that Alpha and Arch will have to replace their bonds if and when they emerge from bankruptcy, and theoretically states could require Peabody to do the same. But it’s not clear that a financially fragile company could replace its bonds. “Once things get resolved in the bankruptcy courts, these companies have two options,” says Greg Conrad, the executive director of the Interstate Mining Compact Commission, an association of state regulators.  “They could either put up collateral, which most of them are not likely to have, or if they do have it they probably won't have enough of it; or they're going to have to seek a surety bond or line of credit,” which they may not qualify for or be able to afford. Conrad also points out that if these companies managed to obtain surety bonds it would eat up a significant portion of the surety industry's capacity, which could have unintended consequences on other coal companies. "There are no easy answers here," he says.

If states do end up giving coal companies time to replace their bonds, Squillace has a suggestion: Force them to step up their reclamation.  “This is critical,” Squillace says. “We need to reduce the extent of reclamation liability, as quickly as possible.” Companies are supposed to do “contemporaneous” reclamation, meaning they reclaim land as they go. But according to a report released last year by the Natural Resources Defense Council, the National Wildlife Federation, and the Western Organization of Resource Councils, of the 450 square miles of disturbed mine lands in Montana, Wyoming, and North Dakota, only 46 have been fully reclaimed.

In the big picture, “the best thing is to move away from self-bonding, and really take stock of the system,” says Anderson. "The good thing is that states can actually do that. Self-bonding is not a requirement of our surface-mining law—it’s an option." There’s been some, if not much, movement in that direction: Colorado officials said earlier this year that the state would move away from the practice, and a spokesperson for the West Virginia Department of Environmental Protection told Audubon that that while there have been no policy changes, “due to the uncertainty with the coal industry right now” the agency is not currently allowing any companies besides Alpha to self-bond, and that until Alpha’s bonds have been replaced the company won’t be allowed to disturb any new land except to facilitate reclamation. Meanwhile, the IMCC has established a bonding working group that will look at the issue, and Conrad says that he can envision some kind of structured process to successfully transition companies out of self-bonds and ensure that no reclamation slips through the cracks. In any case, it’s clear that regulators will need to come up with some process to move forward. “There are substantial liabilities that somebody is going to have to cover,” Squillace says, “or the public will have to live with unreclaimed land for a long time to come.”

A version of this story ran in the March-April issue of Audubon under the headline “Dirty Business.” This expanded, updated version was published online on February 29, 2016.