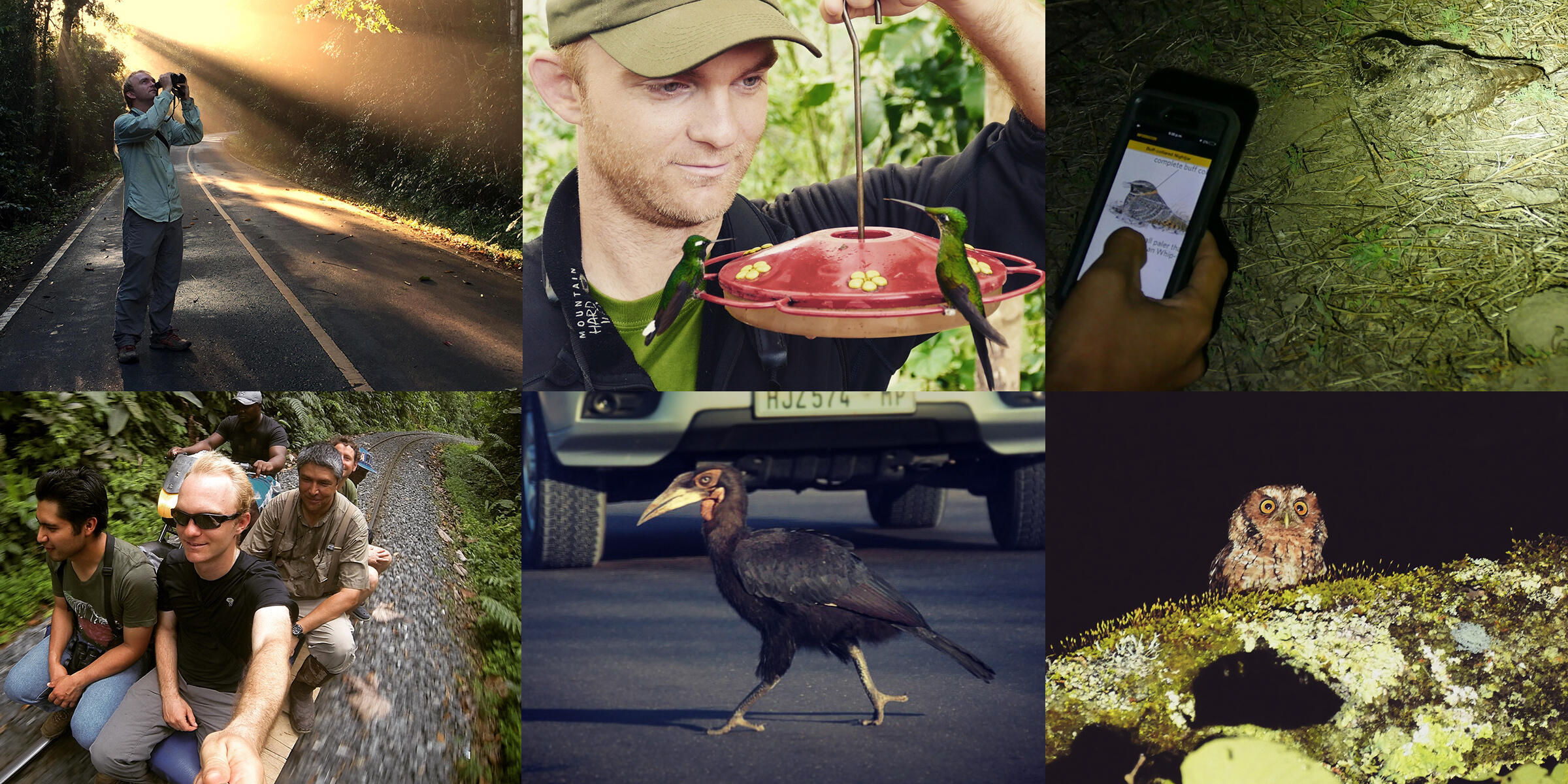 From top left: Noah scans for birds at Thailand's Khao Yai National Park, enjoys a beak's-eye view of hummingbirds in northwest Ecuador, identifies a Common Poorwill (his 2,500th bird of the year) in northeast Mexico, finds a Cinnamon Screech-Owl awakening in northern Peru, photographs a Southern Ground-Hornbill crossing the road in South Africa's Kruger National Park, and rides a motorbike-powered train cart with local birders in the foothills of Colombia. Photos: Noah Strycker

Lessons From the World’s Biggest Year

After 365 days and a new world record, Noah reflects on what he learned—and shares some tips for anyone itching to get outside.

My mission, besides raw adventure, was to bear witness to the diversity—human and avian—that inhabits our planet. I would tap into the worldwide network of birders, hear their stories, and see their species. Such an undertaking has become possible thanks to the Internet, which has transformed how people interact with nature and one another. What was once seen as a pursuit for first-world retirees has become popular across all kinds of borders—birding has exploded in countries like Brazil, Malaysia, and China. As I moved from place to place in constant pursuit of summer, with only a full backpack, a pair of binoculars, a daily blog (hosted by Audubon), and a healthy dose of enthusiasm, I began to see what birding means in this new millennium. I never hired an international guide, but I also never went birding alone. Seven continents, 41 countries, and 365 days later, I had racked up 6,042 birds—besting the previous Big Year world record by 1,701 species!

When traveling the world, it pays to tip well, smile always, arrive early, be nice, and carry a spoon in your back pocket (in case a jar of peanut butter turns up). Here are a few other lessons I learned from the biggest Big Year ever. 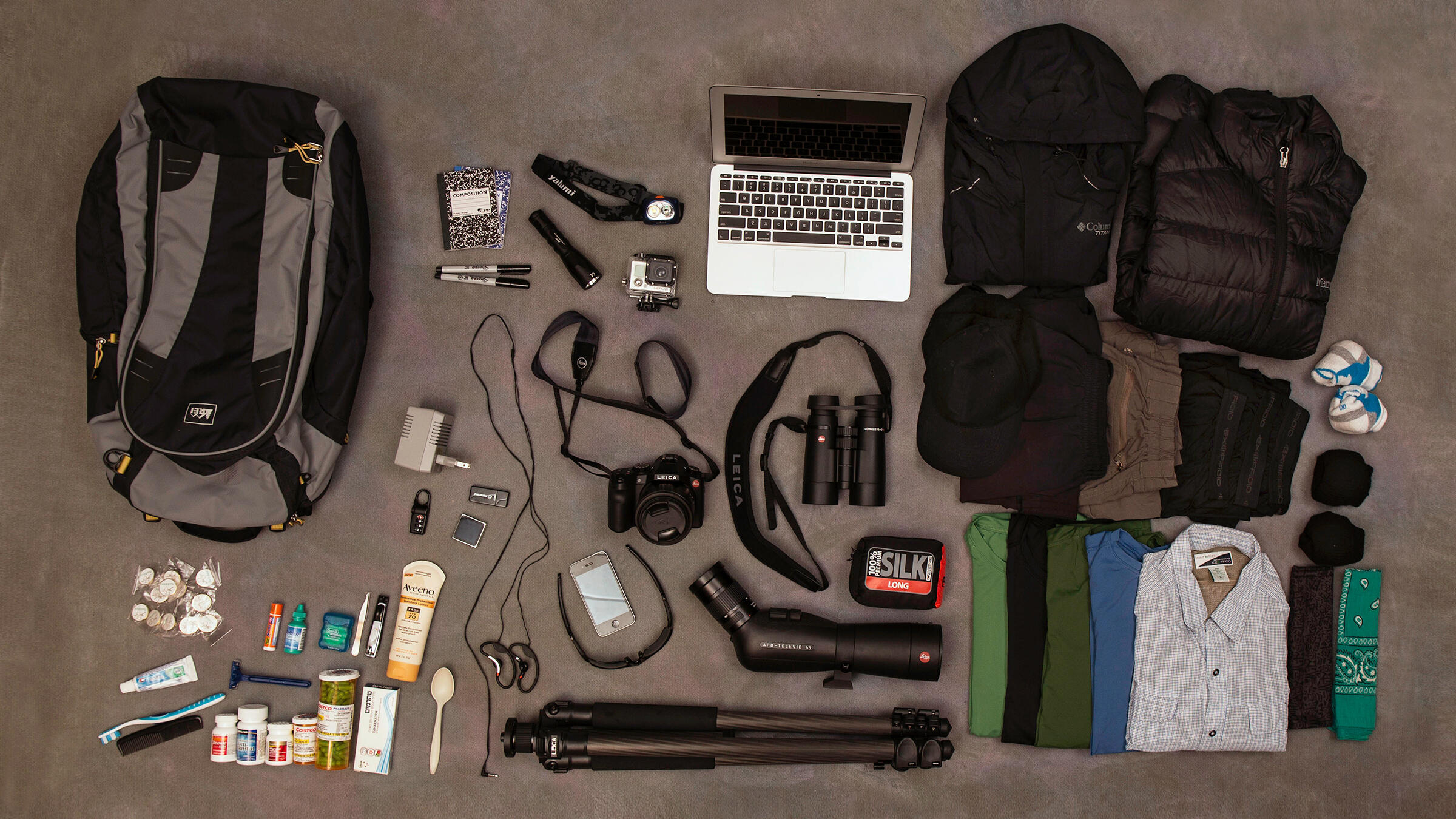 The farther you go, the less you need. For this Big Year, I committed to carry-on. I bought a 40-liter backpack from REI and made some tough choices: Spotting scope or telephoto lens? (I picked the scope.) Deodorant or a third pair of underwear? (I picked the underwear—for better or for worse.) Several times I would have missed flights if I had checked luggage. In Peru I got to the airport 18 minutes before takeoff—and made my flight.

My gear held up remarkably well. Nothing was stolen or lost. The most useful items included a scope, binoculars, and camera from Leica (my sponsor), as well as my MacBook Air laptop and iPhone 6, which were pushed into use every day in rugged conditions and never let me down. Especially practical were a SureFire LED flashlight with rechargeable batteries (for spotlighting nocturnal birds) and a green laser pointer (for pointing out birds in dense forests). Less essential were the portable mosquito net, sleeping bag liner, water purification tablets, and leech socks.

Gmail and Facebook get a lot of credit, but eBird, an online birding database managed by the Cornell Lab of Ornithology and the National Audubon Society, is the birder’s indispensable social network—it currently connects almost 300,000 of us from all over the world. Phrases like “eBird lifer” and “let’s share a checklist” were part of regular conversations in places like India and Taiwan. When I studied up on birds to prepare for the Big Year, I spent more time looking at eBird data than traditional field guides; it was easy to see what others had recorded in the locations I planned to visit.

Speaking of field guides, I couldn’t fit any in my backpack, so I went digital. Many field guides are now available as apps. For the rest, I scanned pages and saved them on my smartphone for easy reference without extra weight.

I had a bigger carbon footprint than usual, but I deliberately circled the world to be efficient, and averaged just one short flight a week. I joined a program to offset those extra emissions. Plus, my tight budget forced me to tread lightly wherever I was—in the end, this whole adventure (travel, equipment, and living expenses) cost about as much as a nice SUV.

Ecuador provided the most species in the shortest time—I saw 625 in 12 days. It’s in the world’s most biodiverse region, and good infrastructure means it’s easy to get around. Uganda ran a close second (517 species in 11 days).

A birder marches on his stomach, and I ate extremely well this year. Highlights included eating home-cooked mole in Oaxaca, Mexico, and Adana kebabs in Turkey. India was the only place that gave me a stomachache—a one-day case of “Delhi Belly”—but the street restaurants in southern India were amazing.

Hot or cold, rain or shine, sticky or not, I always went birding. Melbourne, Australia, had an unusual December heat wave with 110 degree Fahrenheit (43 Celsius) days, which means it edged out the United Arab Emirates as the most sizzling place I visited. The Antarctic Peninsula in January was the most frigid, though, at just below freezing, it was not as bone-chilling as you might think. And though my itinerary crossed many places during their wet seasons, I really got drenched in the Amazon of southeast Peru.

I said I wasn’t going to pick favorites, but three sightings stand out. In Brazil I waited several hours for a Harpy Eagle to arrive at its nest and was eventually rewarded when the male swooped in with a raccoon-like coati in its talons. Months later, in the Philippines, I missed the similarly powerful Philippine Eagle—but saw another favorite bird, the endemic Palawan Peacock-Pheasant, as consolation. Finally, I found the endangered Spoon-billed Sandpiper in Thailand on my third try—a bittersweet sighting because, according to a 2012 Audubon article, the Spoonbill may soon be extinct.

Sometimes you can see the world most clearly when it’s visible all at once. This year I realized that global birding is entering a golden age. And, poignantly, this is happening just at a moment when many bird species are imperiled.

Never have so many species faced so uncertain a future. Global warming may seem abstract, but every day I witnessed its effects: Temperatures in Antarctica have risen 5 degrees Fahrenheit in the past 50 years, causing Adélie and Chinstrap Penguins to suffer while Gentoos thrive. From South America to Africa, locals complained of sporadic rainfall—the extreme drought conditions I experienced in São Paulo had officials considering cutting off the city’s water supply five days a week. With a spiking human population, especially in developing countries, the world’s most biodiverse habitats are under phenomenal pressure—ancient forests logged, pollution choking the air and water. Over and over, I heard from locals how increasingly unpredictable climatic conditions are affecting their lives, their surroundings, and their birds.

At the same time, more people than ever are going birding. Field guides, site information, and access have never been better. Digital photography has sparked a new set of bird enthusiasts, especially in Brazil and Asia. Fresh birding clubs have sprung up in Mexico, China, the Philippines, and elsewhere—sometimes thanks to just one or two enthusiastic personalities. The pursuit of birding, and interest in local conservation, has been revolutionized on a global scale.

While I was out there, the “Birding Without Borders” blog received thousands of visits a day. Something about this journey captured the hearts and imaginations of all kinds of people: university students, hospitalized people, teenagers in faraway countries, janitors, and millionaires, to name a few. You never know how your actions will touch others—my birding fascination was sparked by a fifth-grade teacher—but I hope this project inspired a greater appreciation for birds around the planet among people of all ages, abilities, colors, incomes, and nationalities.

I ended my Big Year more stoked than ever. After 365 straight days of birding, I woke up on January 1, 2016, joined some friends, and went outside to see what birds we could find.