The only remaining wild flock of whooping cranes splits its time between breeding grounds in Canada’s remote boreal marshes and wintering grounds on the Texas Gulf Coast. These photographs offer a rare look at their pristine summertime stronghold in Alberta’s Wood Buffalo National Park, which was discovered only in the middle of the last century.

Since then the Whooping Crane has become one of the continent’s greatest conservation success stories, with its numbers growing from fewer than two dozen in the 1940s to 300 or so today. The vast, unspoiled habitat up north has been critical to the elegant bird’s recovery, and has boosted the whooper’s ability to brave the threats it faces along its narrow, 2,500-mile migratory route. 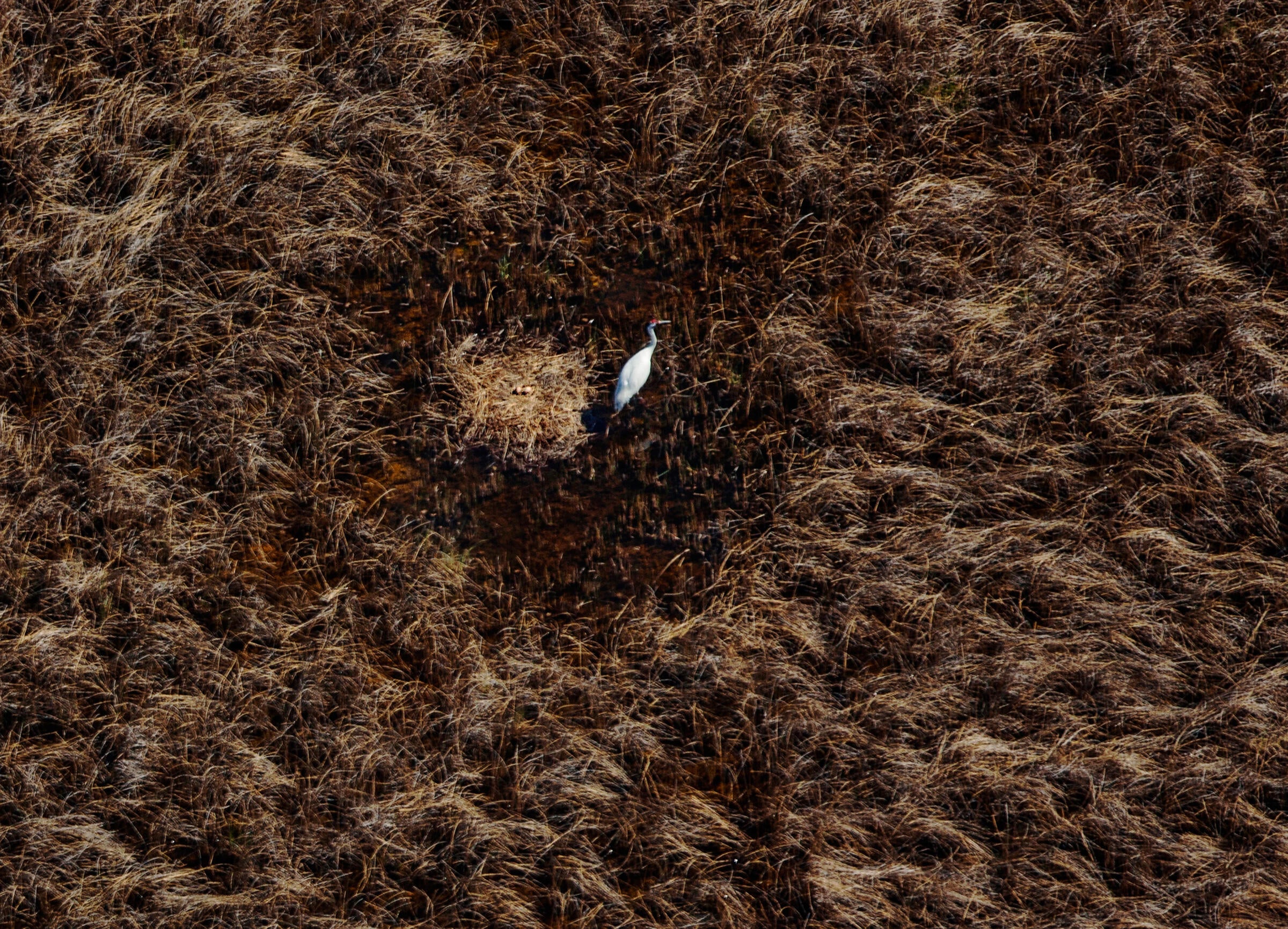 Standing five feet high, whoopers are North America’s tallest birds, though they build their nests low to the ground. The mounds of vegetation they construct have a shallow depression that cradles two 4-inch-long eggs—seen here to the left of the vigilant adult. This past spring helicopter surveys scoured more than 1,500 square miles in Canada’s Wood Buffalo National Park—an area larger than the state of Rhode Island—and tallied 66 nesting pairs (our photographer was along for the ride). That’s down from 82 nests last year, but Stuart MacMillan, manager of resource conservation at the park, says the drop isn’t cause for concern—despite fluctuations, the population is growing at about four percent per year.

“The number of nests is important, but equally important is the number of fledglings,” he says. Last year biologists counted 32 of the youngsters, whose tan feathers provide camouflage until their brilliant white adult plumage grows in. Usually 40 to 50 percent of nests produce a fledgling. “Younger pairs are sometimes unsuccessful because they’re just learning to be parents,” says MacMillan, “or predators might take the chicks.” 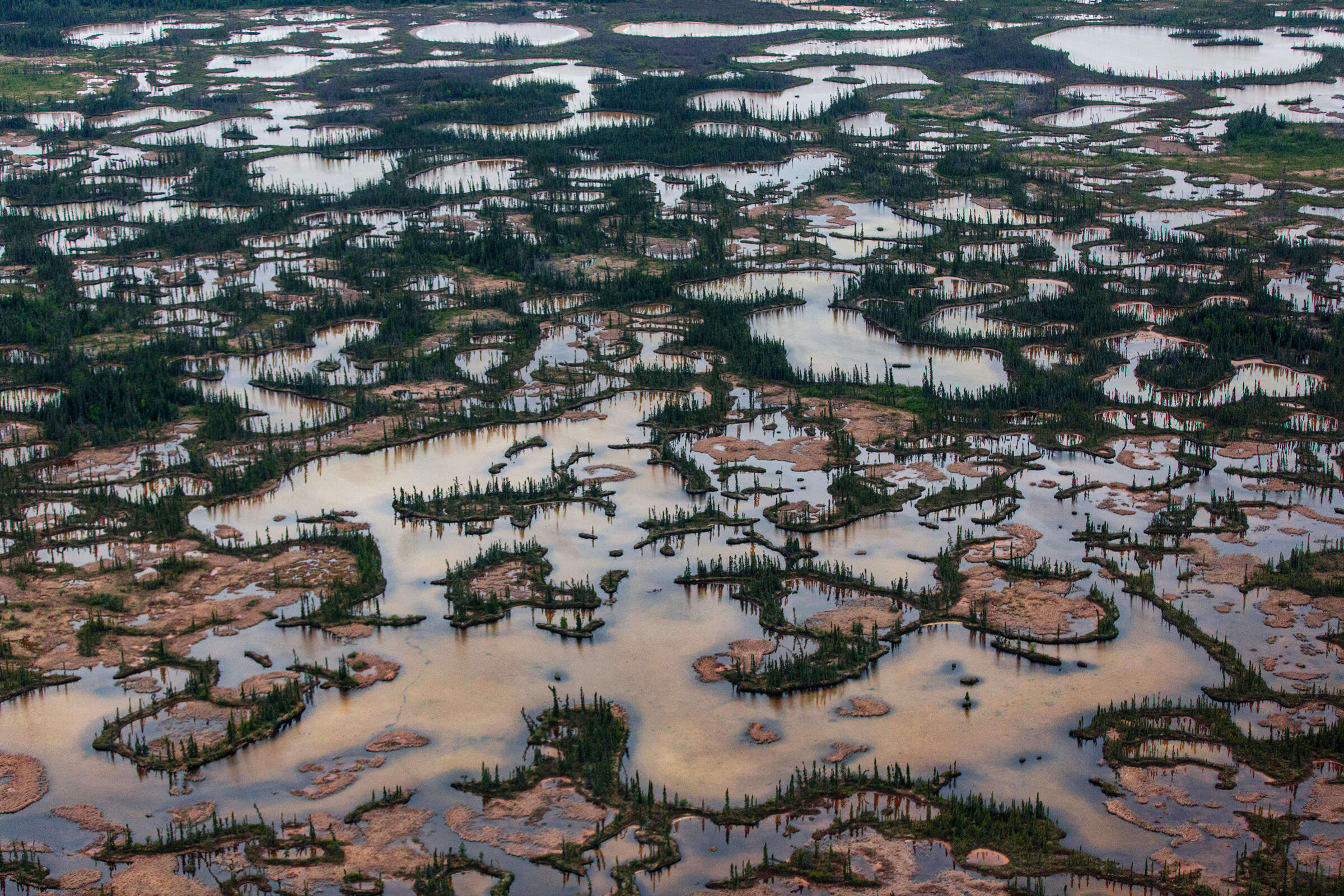 The cranes flock to these vast wetlands in late April. Shallow ponds ringed by pine- and spruce-dotted ridges provide ideal habitat for breeding and raising young, and provide a rich buffet for the unfussy avian diners. “Dragonfly nymphs, other bugs, mice, frogs, and toads,” says MacMillan. “They’ll eat whatever they can snag with their bill.” The watery expanses also offer protection from earthbound predators, including foxes and black bears. Drier years, like this one, can hinder a chick’s chances of survival; more pathways open up for carnivores to reach the birds, and adults may have to forage farther from their nests, which means less food for offspring. An August fledgling count will reveal how youngsters fared this year.

Scientists are also going beyond visual counts: An international team attached transmitters to 31 juveniles in Wood Buffalo and 37 cranes in Texas’s Aransas National Wildlife Refuge between 2009 and 2013. “We now have been able to monitor individual cranes on their breeding territories for multiple years,” says USGS biologist David Brandt, adding that several transmitters are still active. “When they’re in the same spot for days and days and days, we know they’re on the nest.”  They’ve also discovered that some birds that haven’t yet reached breeding age (about four years) aren’t bound to nesting grounds. “They’re like teenagers wandering around, possibly looking for girlfriends or boyfriends,” says Brandt. An incredibly detailed picture of the bird’s movements is emerging, from the gradual expansion of its summer and winter ranges to stopover sites along its extended migration route—information that could help managers prioritize conservation in areas where the cranes rest and refuel. 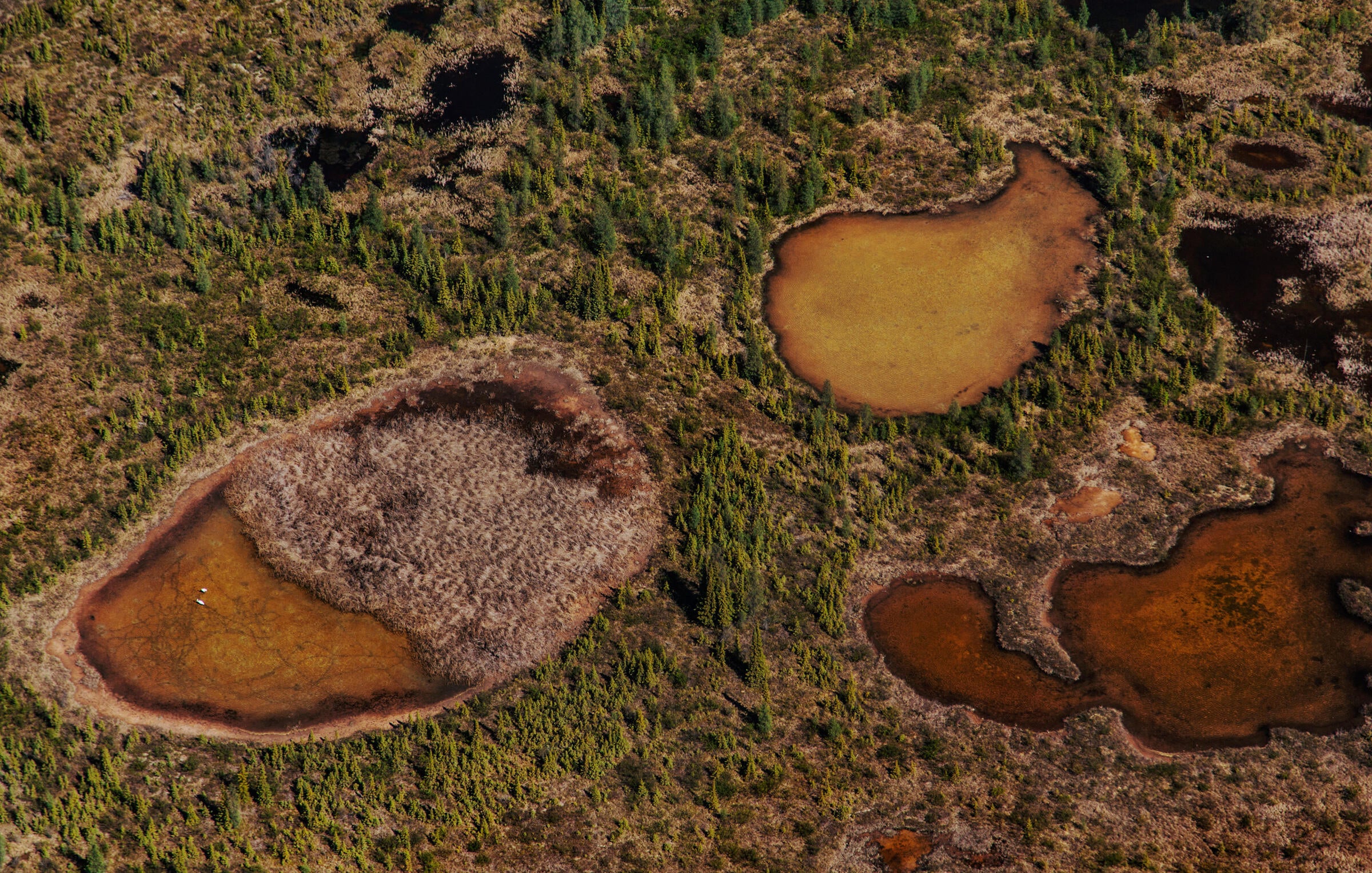 Wood Buffalo boasts countless freshwater ponds like these, one of which has two whoopers in it. Amid these watering holes are also salt plains, the remnants of an ancient inland sea that once stretched across much of North America—cutting southeast through the plains to the Gulf of Mexico, similar to the route the cranes travel on their biannual journeys. The Whooping Crane tracking project is helping scientists better understand emerging threats outside Wood Buffalo, “like tar sands operations in northeastern Alberta, or wind-power development in the Great Plains, or coastal issues in Texas,” says Barry Hartup, director of conservation medicine for the International Crane Foundation, which helped facilitate and fund photographer Tom Lynn’s trip to Wood Buffalo. Hartup, who works primarily on the ICF’s captive-crane program in Wisconsin, is assessing wild cranes’ health using samples, including scat and blood, he collected as part of the tagging team.

“It was a rare opportunity to lay our hands on the birds,” he says, adding that from the helicopter touching down, to racing across the marsh, to expertly handling the bird took 10 minutes on average. Hartup hasn’t detected any disease-related concerns, and next plans to look for toxins; if he finds evidence of pesticides or other chemical exposure, the tracking data could help pinpoint the source or suggest mitigation strategies. Despite possible threats, he’s optimistic about the bird’s recovery. “It’s striking how robust and resilient these creatures are.”